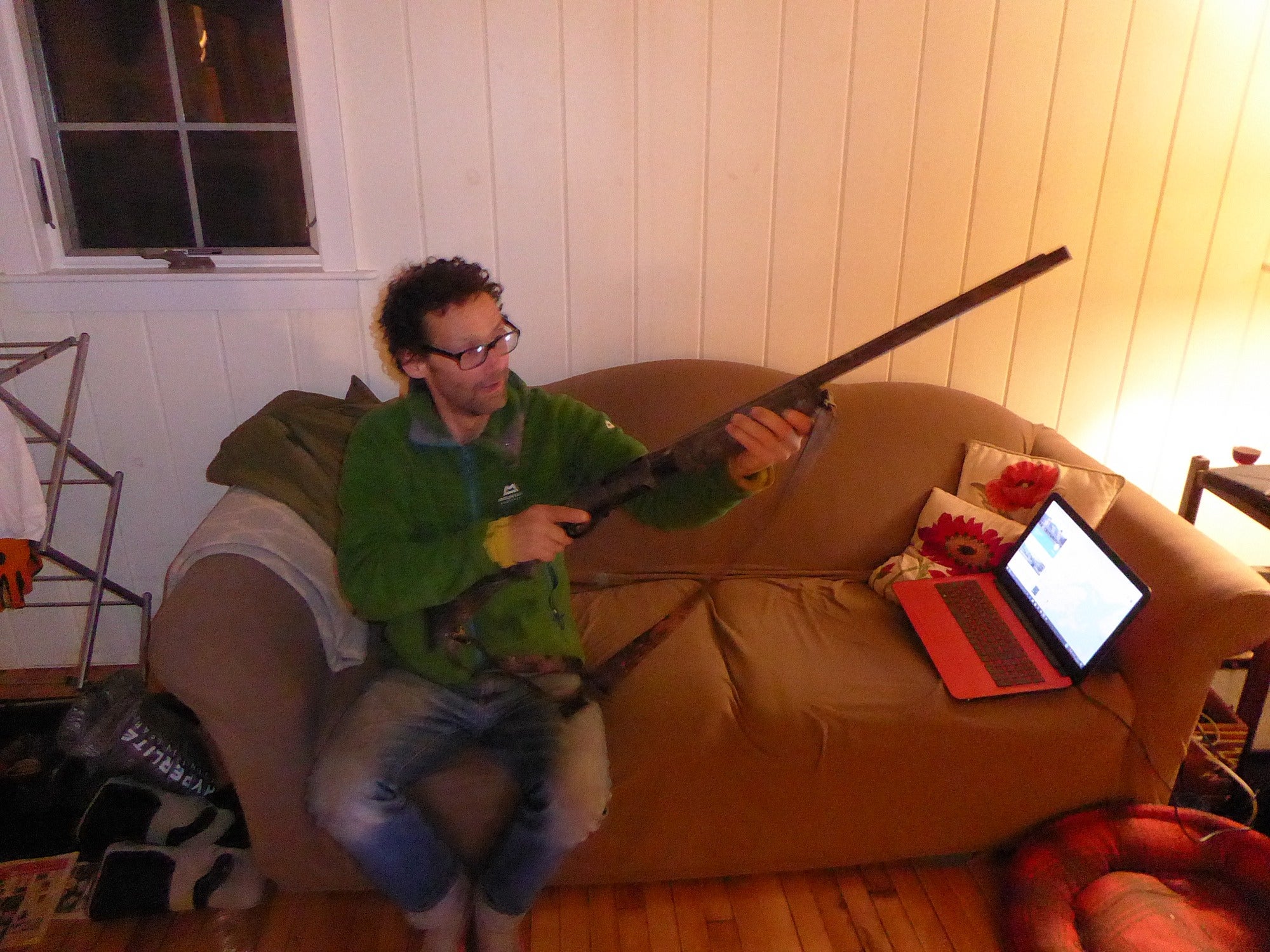 When we first turned up there at the start of our recent Newfoundland trip, I have to admit to being, well, just a wee bit under-whelmed. Parsons Pond has a population of about three hundred or so. An ice-scoured township on Newfoundland’s mid-West coast, it’s not exactly a tourist hotspot, especially in February. In fact, I doubt it’s known or visited for anything in particular.

I think Bayard had gone off to find one of the locals who’d helped him out on a previous visit, when Nick and I decided to explore the local Bakery. We stumbled in out of the blizzard to find a full house of Newfy thoroughbreds—more fur-lined boots, snow suits and facial hair than made either of us feel especially comfortable. Our brightly-coloured technical mountain wear seemed to glow and dazzle the locals through the dim tungsten light. The thermometer on the café’s little convector heater must have been set at about 30oC. The lively banter that prevailed on our arrival was reigned in abruptly to near silence. You could have cut the atmosphere with a knife. We stood there for a moment, gently simmering under our four layers of performance clothing, feeling a bit like the proverbial lambs just arrived at the slaughterhouse, before Nick blurted out confidently in his best Northern English drawl: “Allaow, ‘ows it gowin then?”

Within minutes, this burly gang of steel-framed, hard-eyed North Atlantic souls had softened to smiles and laughter. “You’re fram Scotland ur ye?! Jaysus, me woif’s mather’s from Glaysgow don’t ye know!” and “Ye’r Mountin’ Climbers are ye now?! Jaysus what ye dowin’ that fur?!” “And them outfits ye’ve gat an theyur – they’s more Disney Land than Newfinland!” Never before had I seen cool caution so sharply transform into warm, welcoming banter. As we would say back in Scotland, the ‘craic’ was good. 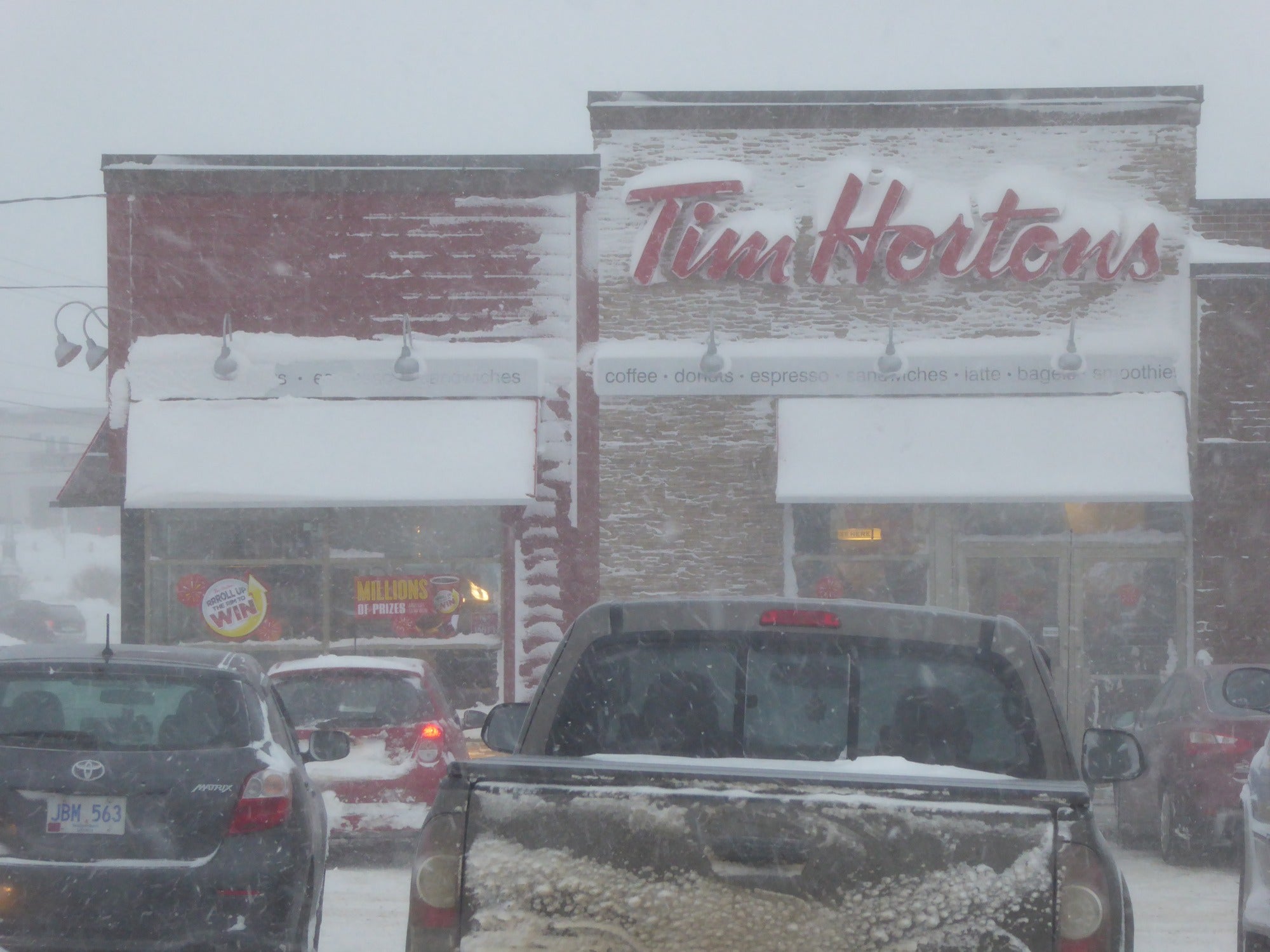 One of the gang was particularly animated, a short but incredibly broad fellow by the name of Pierre. He had brightly dancing eyes and a wild, wandering moustache. When the rest of his team went off to see to whatever daily duties they had lined up, Pierre sprinted off to his house to fetch us some bottled moose meat as a welcoming gift. This concept puzzled me somewhat at first. How on earth does one get a moose inside of a bottle? “We are aalso puttin’ the rabbit in a bottle, b’y”. My confusion was compounded. When Pierre returned from his kindly excursion, however (complete with beer in hand and joint in mouth) it all became clear; Newfies don’t readily distinguish between ‘bottles’ and ‘jars’. I dutifully accepted the small jar of homogenised lard and meat and transferred it safely to the foot well in the back of Bayard’s truck.

We would meet and chat and go out ‘across the pond’ with Pierre on many more occasions over the following ten days, always lifted by his sardonic humour, and always trying and failing to fend off his never-ending supply of beers (to be fair, he was always drinking ‘Lights’). He was one of a dazzling array of at once remarkably funny, generous and larger-than-life characters that inhabit Parsons Pond. There were Brad and Lamont, who quickly made sure we had fully-serviced lodgings by way of a cabin at the foot of the mountains—a good 8-mile snow machine ride from the roadside. They seemed to be the senior members of the team, slightly less wild and chaotic than the others, though I strongly suspect they’d had their day. 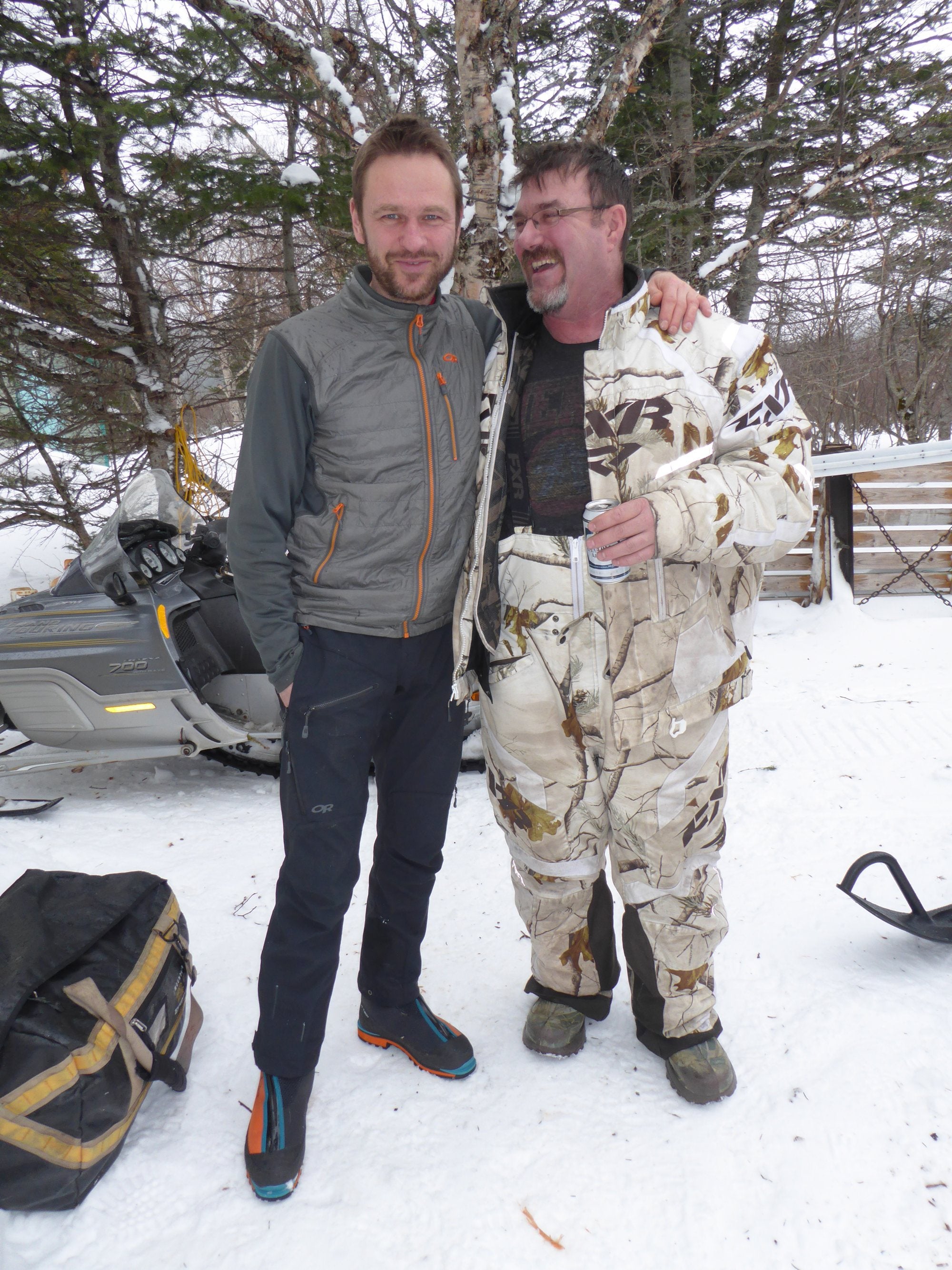 Then there were Derek and BJ, the two token members of the young team, whom we met in the bar at Cow Head and shared drams with long into the night. They also wouldn’t let us pass by unassisted, helping us back over the pond and into the cabin after Brad and Lamont had departed the island for work. Our night in the pub together left me broken for two full days, on account of both a vicious hangover and a severe case of laughter-related facial cramps. I remember lots of dancing and wrestling and stories and drinking, but not much of the detail, unsurprisingly. Well done to Bayard and Ryan for making it out of bed before lunchtime to take our new friends out climbing!

Last but a million miles from least was Bevin, one of the most kaleidoscopic characters a man could ever hope to meet. Bevin works at the sharp end of a diamond mine, deep under the ice in Canada’s remote Northwest Territories. Like so many people I know at home in Aberdeen, he works two weeks on and two off, on rotation. He likes a beer just about as much as he likes his snow mobile, his boat and his various other toys. It’s good to hear being away from your family and stuck down a hole under the Canadian ice offers at least some kind of dividend.

Bevin was the first to take me out across the pond, and it was a day that will live with me forever. I’d never been anywhere near a Ski-Doo and was more than a little wary jumping on the back seat for the first time. I knew fine well from childhood escapades on motorbikes the raw power that lurked under the bonnet of his 800cc two-stroke beast. I had my eye closely fixed on him as he quietly drew another beer from his pocket—his third since we’d hooked up, I’d counted. It was barely even lunchtime! After a high-speed launch out toward the ice, just at the point when my frozen hands were losing the ability to hang on much longer, he stopped on the edge of the pond proper, dismounted and handed me the keys. “Draave” was all he said. Moments later I was pressing the throttle, feeling the exhilaration of the front skis lifting as we nudged gently up towards 80kph. This was less than halfway through the full dial of the speedometer. 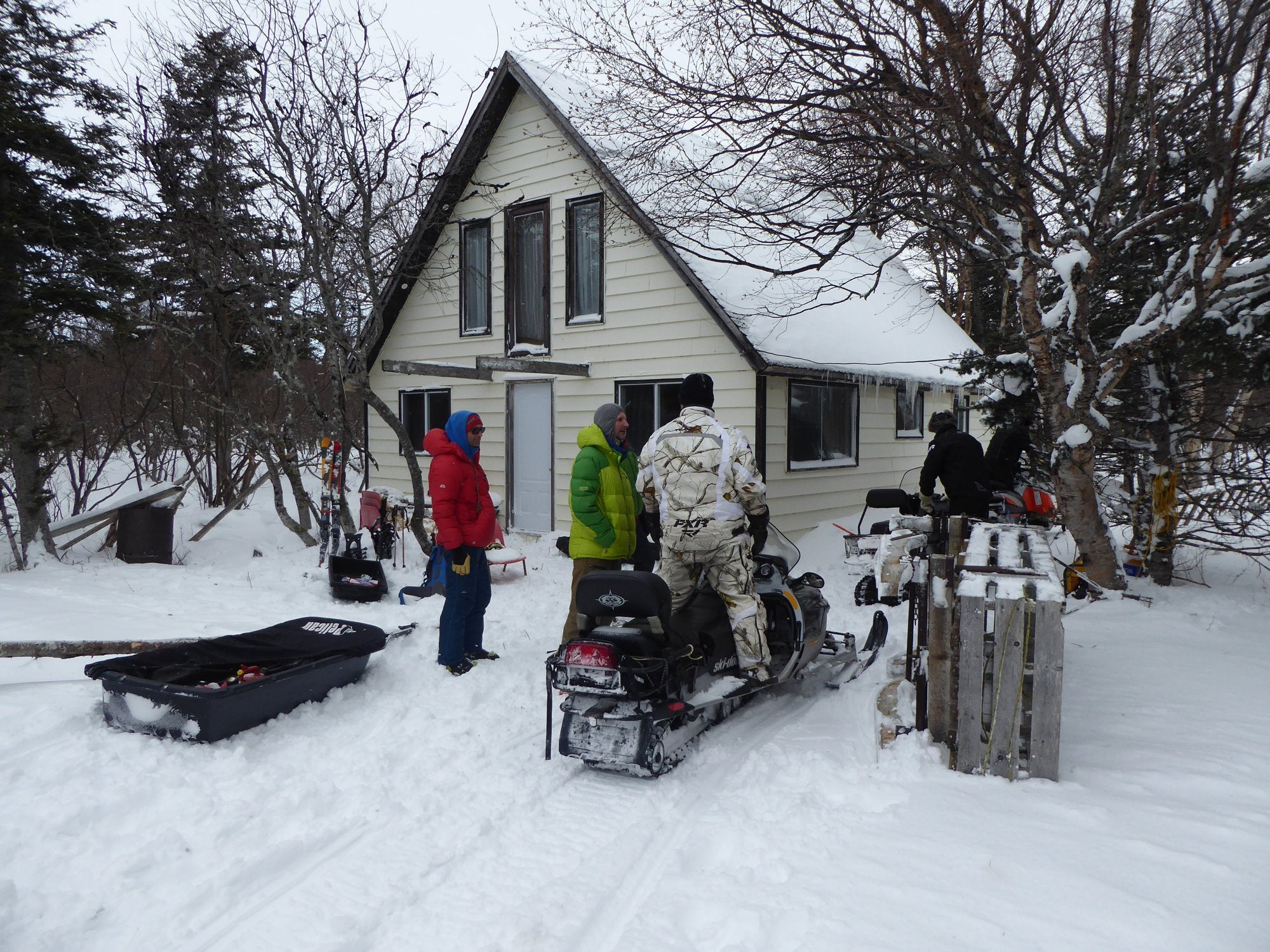 We stopped numerous times on the way, sometimes to wait for the others, but also so Bevin could share his knowledge of the pond and the adventures to be had out there. Brook Trout, Salmon and Char all the way up to the inner ponds in the summer. Ice fishing during the winter. Grouse in summer, Moose and Caribou all year round. And then there was the great shifting, creaking, booming mass of the pond ice itself. A trip out there could quickly end in disaster, especially under thaw conditions, and especially where the fast-flowing brooks tumbled down the hillsides and entered the calmer waters of the pond itself. Through my own research, I knew the weather and temperature in Newfoundland to be constantly changing, often from -15 or less to +5 or more in any 24-hour period. The result for the frozen ponds is something akin to a frozen minefield. Bevin’s tour was an education, and my initial, somewhat flat impressions on arrival in Parson’s Pond were transformed into an almost overwhelming sense of excitement and anticipation.

The high-pitched scream of his snowmobile stepped up a notch as I pressed the throttle a little bit harder. Parsons Pond disappeared over the long white horizon behind us, as the deep fjords and their great icy crags edged closer up ahead. I closed my eyes just for a snatch of a moment and let the frozen air course through my lungs. As I opened them again, a pale sun winked softly through a swirling hole in the clouds overhead. I had a feeling it was going to be a memorable trip.