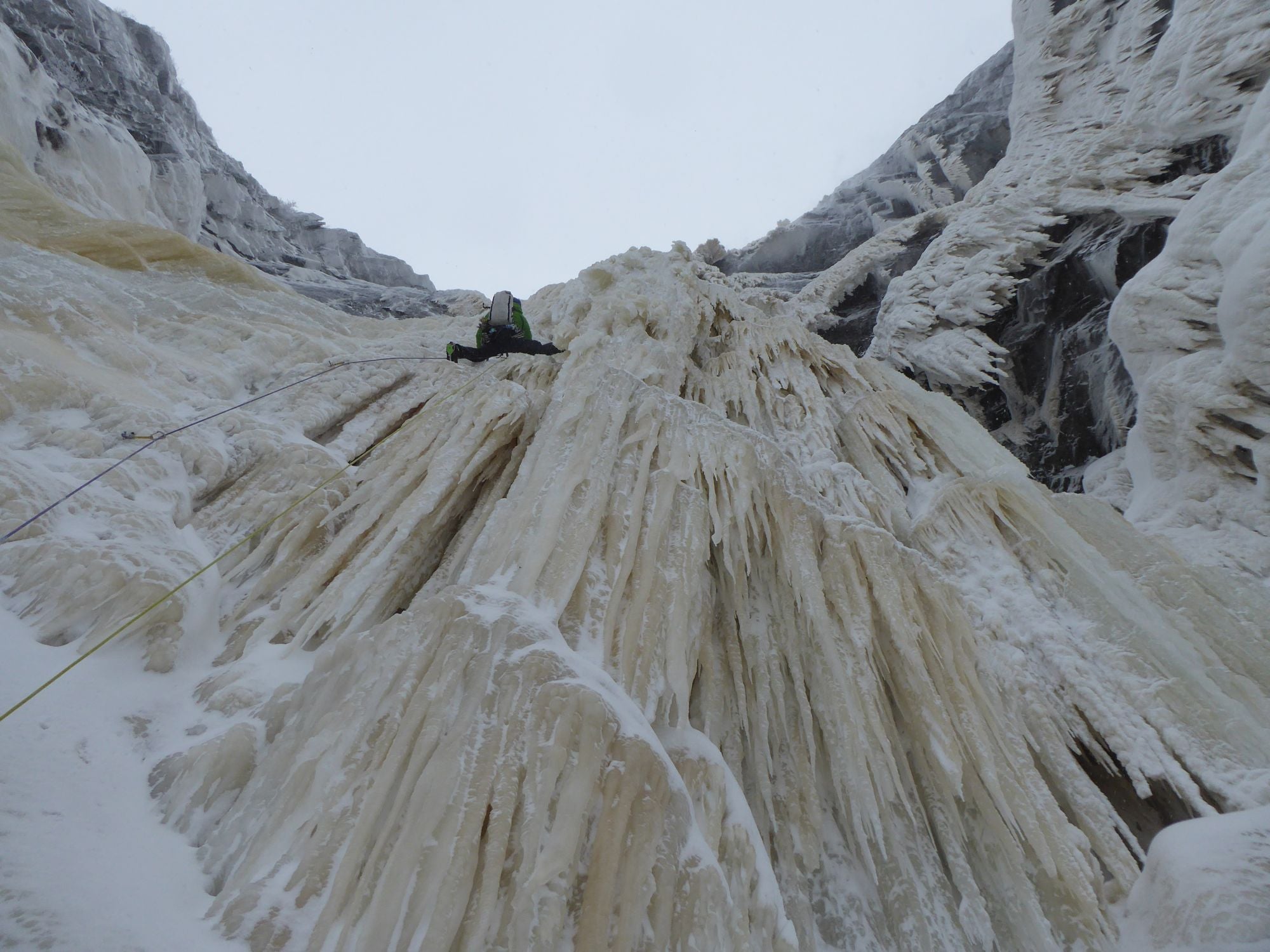 When we finally managed to stop our bellies from aching from too much laughter and moose meat, we enjoyed some truly world-class climbing. Looking back, I think by Newfy standards we actually climbed quite a lot, completing two big routes in a 10-day trip. (A Newfy regular, Ryan Stefiuk, had advised me that more than three routes in any trip is highly unusual).

For our first route, Nick Bullock and I teamed up to make the second ascent of a route called “The ‘Arding Slot” put up by Newfy veteran pioneer Joe Terravecchia and partner. This is really the first major line that appears on the left on approaching the inner reaches of Western Brook Gulch. A gob-smacking “splitter” gully line providing seven perfect pitches up to M6 / WI5+. The grade was somewhat misleading, though, with the crux involving ten metres of horizontal back-and-footing out under a giant roof, followed by what would best be described as a “5.9 off-width slot.” Watching Nick squirming helplessly in the jaws of this great beast, for easily an hour or more, was at once hilarious and terrifying. Would I be able to make it through? Fortunately, of course, I had the benefit of his hindsight, so I swiftly arranged what gear I had on my harness to the sides rather than the front or back. It worked a treat. I slipped on through like a wisp of smoke. The rest of the route was just about as good as this type of route gets: a bit of steep and icy mixed, free-standing ice pillars and curtains, and even another squeeze chimney up high to keep Nick happy. Fortunately this one was wider, and had ice on one wall. A few long abseils saw us back on the deck in time to walk out under perhaps the rarest of Newfy delights, a stunning winter sunset. 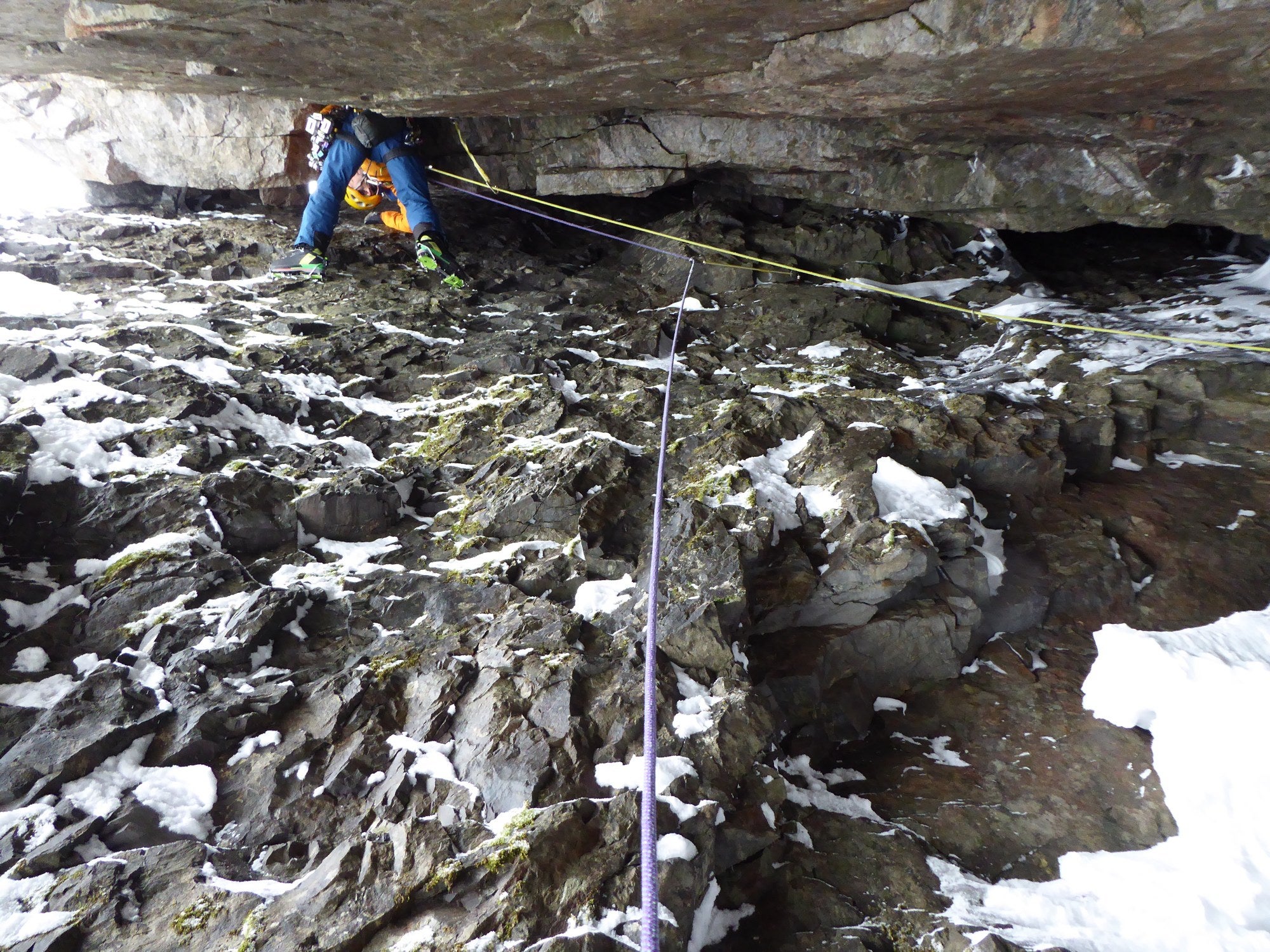 Also that day, Bayard and Ryan teamed up to climb a very fine looking pure ice line to the right of “Newfinized” (WI5+), one of Bayard’s offerings from the previous season. The second route was perhaps the highlight of the trip – not as long and not as “Ard” as the Slot, perhaps, but with an atmosphere and intimidation factor all its own. “Gat Me Moose B’y” (WI5+) takes the stunning ice cascade that spills down the centre of the great amphitheatre at the very back of Western Brook Gulch. On the first and only ascent (Terravecchia, again), the lower roof was impregnable—nothing more than a giant curtain of Damoclean fangs threatening the long gully below. The route was apparently named after the stubborn advances of a solitary moose guarding the start of the ice. (Every Newfoundlander has the legal right to shoot one moose every year.) 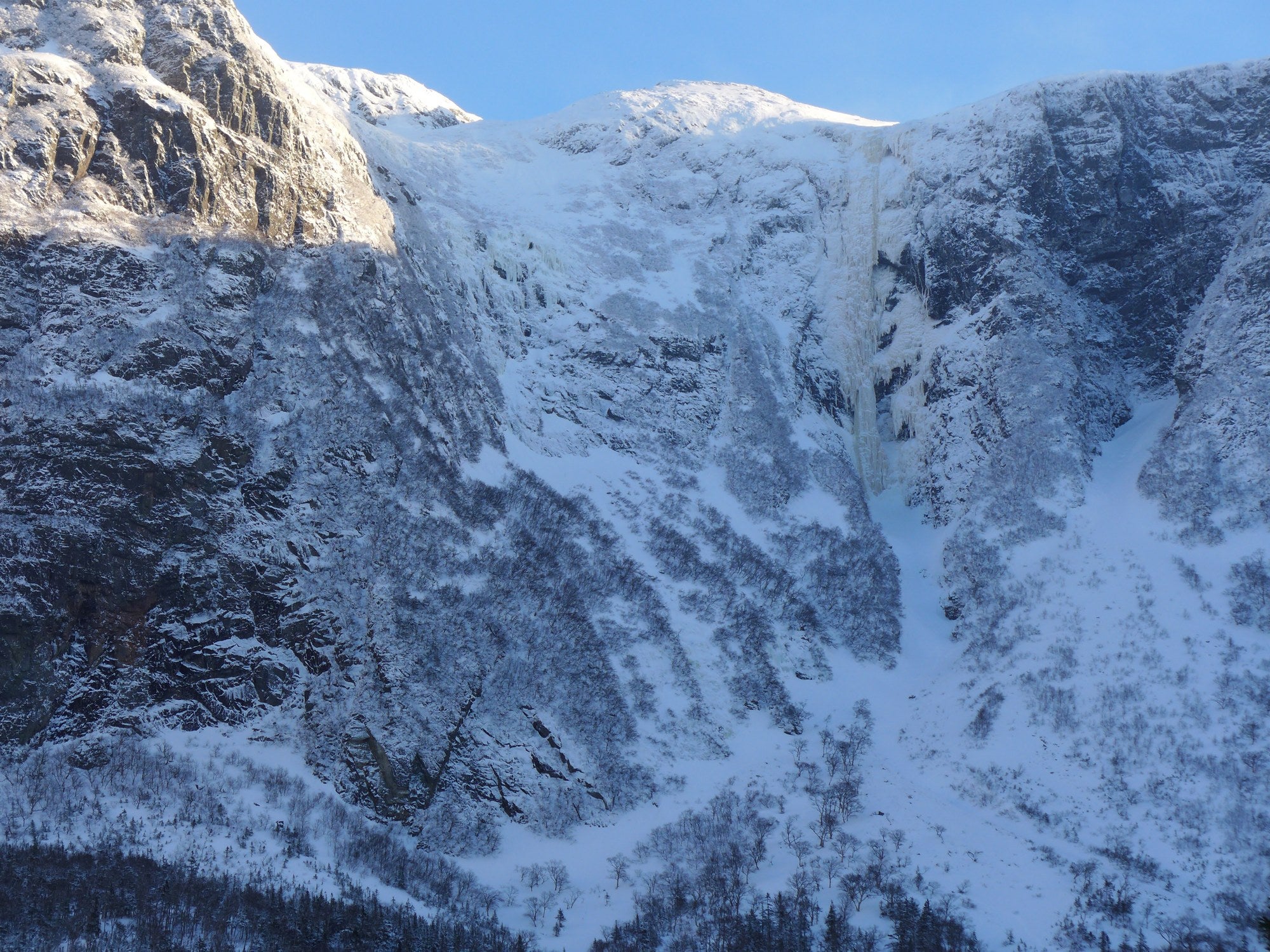 On our ascent, the lower fall touched down, forming a gargantuan pillar composed entirely of huge tufas and tendrils, presenting a most Gothic and other-worldly impression on close acquaintance. Our apprehension wasn’t exactly eased when one of the great ice chandeliers up high broke loose and crashed out behind us as we geared up! As it turned out, the Moose had a bark much worse than its bite, and the climbing—although sustained and scary—was never desperate. How looks can be deceiving! Nonetheless, strapping it on and suckering up the front of that great ice monster will no doubt live on in the memory forever. The walk out was most memorable too—a rabid easterly wind forcing us to ditch our skis and don crampons just to walk across the inner pond. 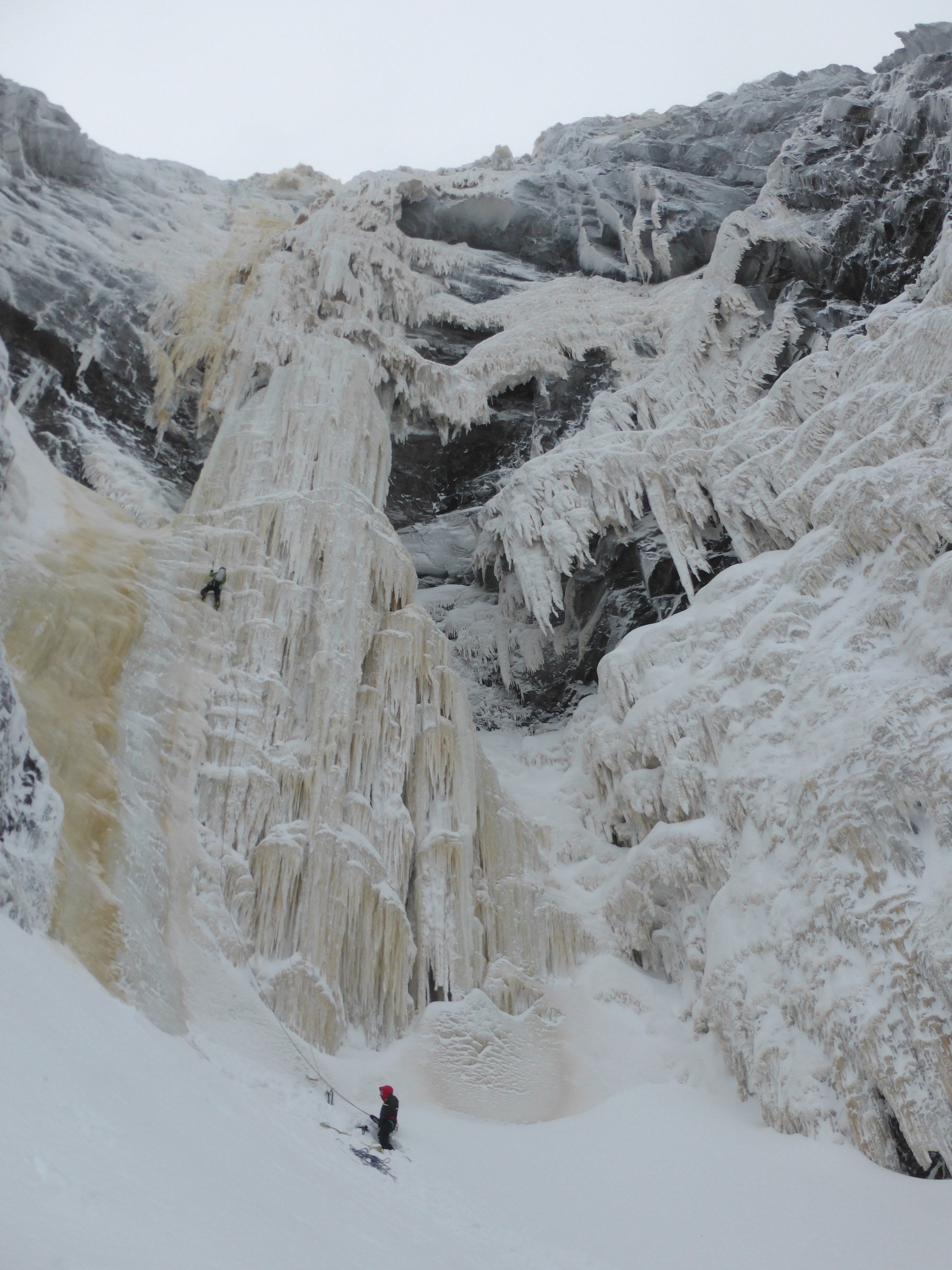 We climbed other lines during our stay on the island, Ryan and I squeezing in an excellent afternoon’s cragging on the point a few miles north of Parson’s Pond, and Bayard and Nick nailing it into Ten Mile Pond for a repeat of the stunning “Fat of the Land” (WI5+). The climbing was great all around, but my abiding memories of this amazing island will always be of its wonderful people, their hospitality and generosity, and their indefatigable and infectious spirit. If you want world-class climbing in a remote and challenging environment, but you also want to have lots of fun while you’re at it, look no further than Newfoundland.

Thanks to our “local support crew” on the island: Bevin, Pierre, Lamont, Brad, Derek and BJ, and any others I’ve missed. Also, huge thanks to Anne Skidmore Russell for lining me up on Saturday night and sorting lodgings at Mount Washington Ice Festival en-route to Newfy—I had a total blast! Thanks to everyone else who made my brief stay in New Hampshire so much fun – your hospitality gives even the Newfies a run for their money! And finally, a MASSIVE thanks to Outdoor Research for supporting the trip – it wouldn’t have happened without you and I can’t thank you enough. Other than to keep telling everyone that YOUR GEAR ROCKS!