Have You Been Newfin'ized Yet? 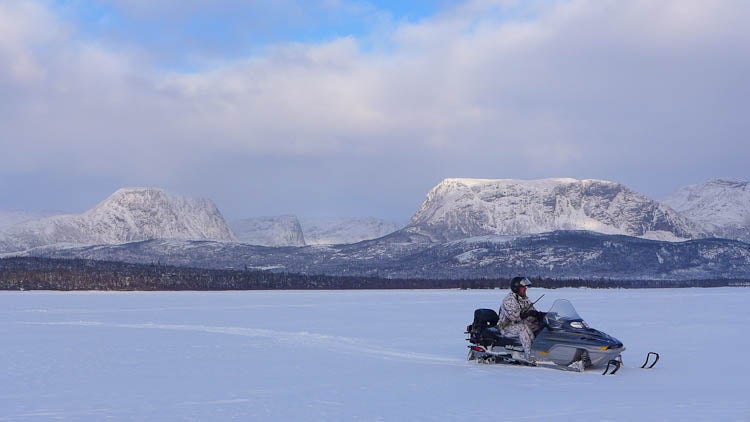 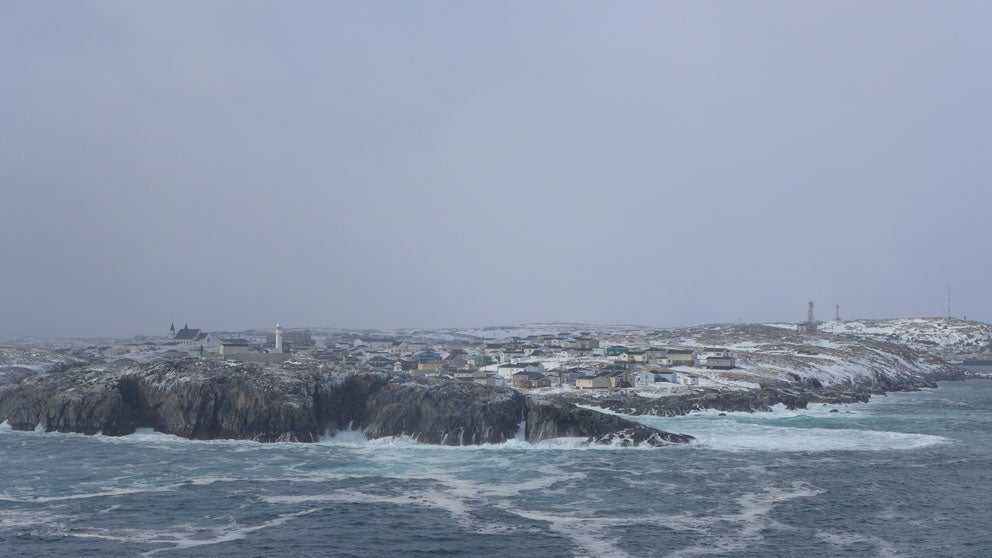 There are no other people quite like the Newfies. They’re a strong people, many of them quite literally. They may be stone faced at first glance, but I’ve found it doesn’t take long to get past that and onto the part where they bend over backward and give you anything they can.

2014 has been the year of Newfoundland travel for me. My first trip up there was ice climbing in February, a trip I’d always wanted to take but was never able to pull off during that most busy part of my winter guiding season. This year, I just went. And went back in September, too, this time to the southwest coast, rock climbing. 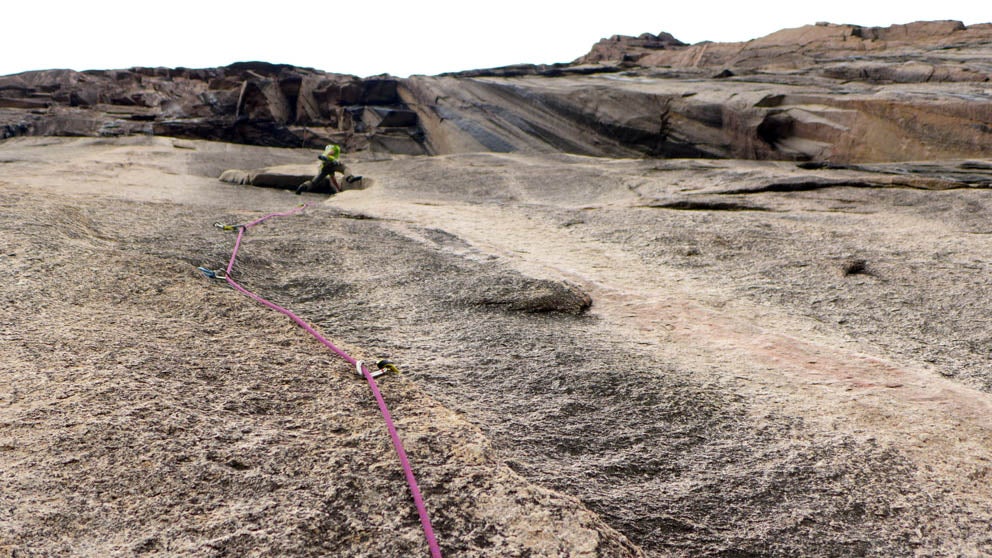 Two trips in, and I’m glad I didn’t go sooner, or I might have missed out on some of the other cool places I’ve seen and simply spent all my time up there.

I grew up in a family that went really far north for vacation. We have a camp outside of Jackman, Maine. It was the attainable holy grail to my father, and to me, too, when I was finally allowed to go at the age of eight. “Way back in the woods,” as my dad used to start off all his bedtime stories.

After college, the fishing and hunting trips we took just kept getting further north and further east. Leaving the pavement behind for hundreds of miles to find partridge and trout in remote parts of northern Maine and through Labrador and over to Quebec.

In my twenties, I took the requisite trips rock climbing in Yosemite, ice climbing in the Canadian Rockies, and driving all around the West climbing in many of the classic spots. And I loved it, but northern New Hampshire always won out, and I would return to my adopted North Conway home.

Newfoundland is also in the Northeast, although I could drive to Eldorado Canyon as fast as I can get to Gros Morne or to Devil’s Bay. But sea level there is like being 2,500 feet up in the White Mountains of New Hampshire, or the North Maine Woods. It’s a lot of thick cover that we call “black growth,” tight spruce and fir, mixed in with the occasional birch and poplar (aspen to you westerners) and plenty of alders. It’s moose and grouse cover. I love it. Heading north and east right out of my driveway - away from the magnetic West where my climbing compass has always previoualy been oriented—is something I love. Newfoundland feels like a natural destination, even close despite the 30 hours of multisport travel involved in getting there. When I’m driving around the island, it always reminds me of my father, even though I’m not sure he has ever been there. It’s because of things like this: like here in New Hampshire, it can rain in January. The locals say that’s good for firming up the surface for their snow machines, but it’s probably good for the ice climbing, too. 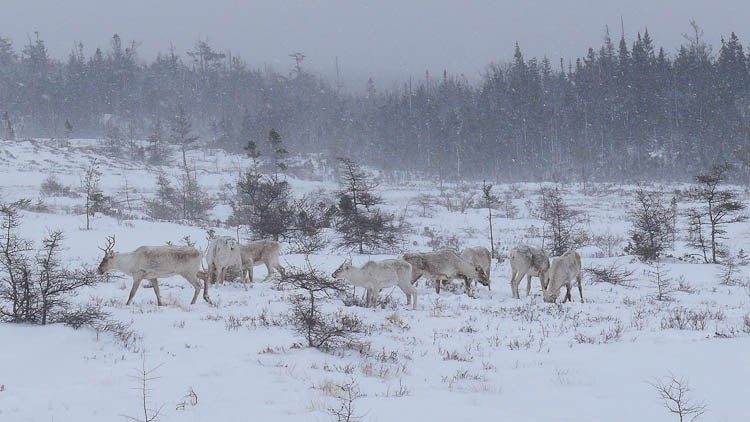 Ice climbing in Newfoundland is snow machine accessed, which is why Ryan Stefiuk, Chris Beauchamp and I were in a bar drinking a beer at 11 a.m. We needed a ride into the local mountains, about 10 miles across a frozen saltwater lake, or “pond.” The bartender was very studiously listening to our request, thinking hard about who was around and who was away working. Finally, she picked up a battered old phone book from behind the counter, seemingly disappointed that the go-to guy-for-this-kind-of-thing was out of town, and after a pause said something into the phone that we couldn’t understand. This is where our good luck began.

About three minutes later, two burly but clean-cut locals walked in, straight faced, and matter of fact. Ordering a couple of beers, they talked a bit with the bartender. One of them, Bevin, eventually turned and informed us there was no way they could give us a ride. But then, in the same tone of voice he had delivered the bad news, he offered us two snow machines, a toboggan to haul our gear and a cabin to stay in for as long as we liked. It was his uncle’s and it just so happened they were headed out there that afternoon to spend the night and party with the “b’ys.”  “Ready to go?”

We kept from dancing around in circles until we left the bar, planning to meet back in a couple of hours. Once back in the privacy of our car, we were like giddy hand-slapping-school-girls playing patty-cakes.

With the moose blood freshly rinsed out of the toboggan that was hitched behind, I swung the machine around with all our gear and immediately buried it all in a snowdrift. Still in the front yard, and stuck. Our hosts patiently helped me haul it out and off we went, right through town, off a bridge embankment and out onto the snow-covered ice.

Every now and then, we’d stop and talk. I would pull up behind and, politely Bevin would get off his machine and walk back so I could hear the discussion. After the second break, he informed me that I should just pull up next to him; he didn’t like getting off his Ski-Doo. 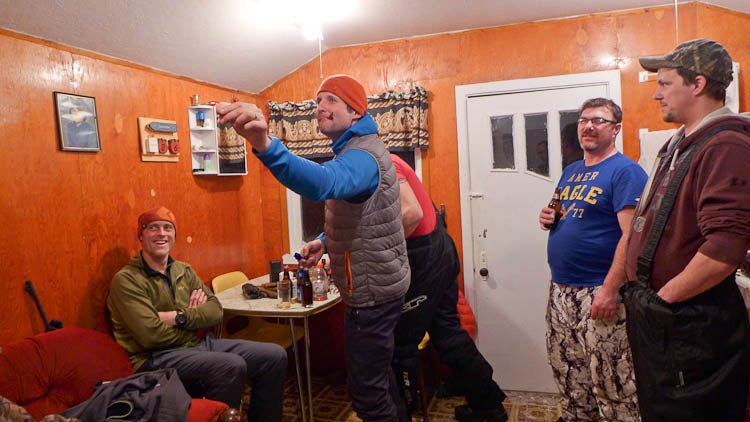 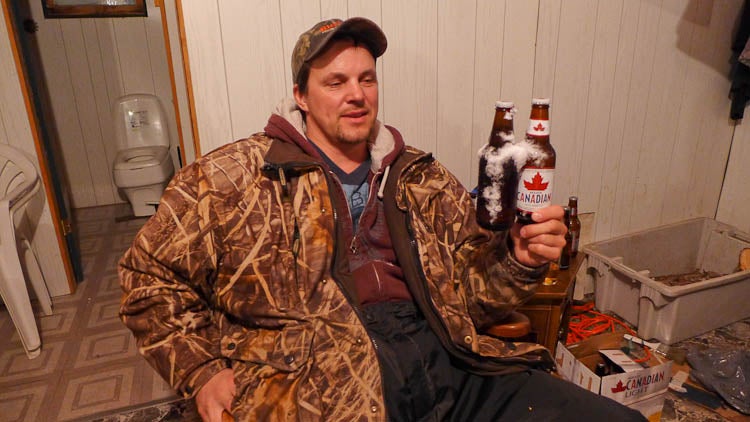 That evening, I didn’t want to let our hosts down. I stayed up late, but they stayed up later. A friendlier group I have never met. When I saw them next a few days later, I was sure to let them know that they had destroyed me. They laughed hard and told me I had “been Newfin’zed”. 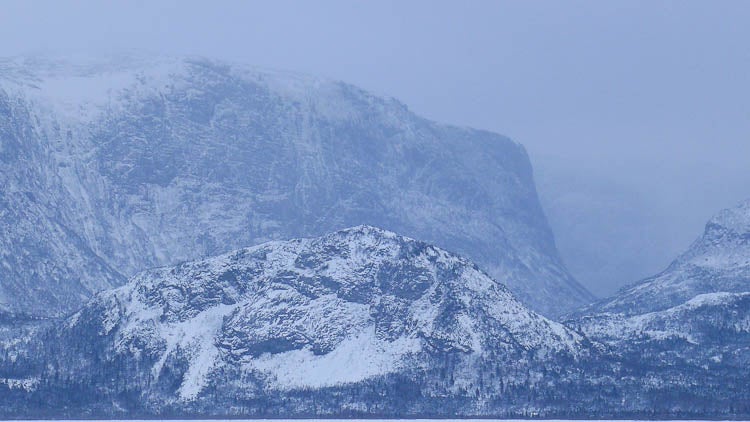 On the bright side, it was cold, and the brisk air felt good the next day on my throbbing head. In an 8-snow machine caravan, the b’ys led us around a section of thin ice on the pond and through a quarter mile of alders to where we left the snow machines. A hiking trail cut its way from here through an almost-otherwise-impenetrable wall of spruce and fir growing on a small highland blocking the open valley behind.

This valley was what we’d come to see. After a couple of hours of hiking, we had seen beautiful terrain already, steep walls and great looking ski runs. But the half mile of visibility through light snow was limiting. Hiding right in front of us the whole time was a beautiful ice climb, steep, long and gorgeous. Once visible, we assumed it had to be our objective, but it was intimidating. It looked like a four-hour approach, the final hour under massive hanging icicles. The route would be 1000 feet of hard, exposed ice climbing in temperatures just above the zero mark. That day we were relieved to turn the corner in the back of the valley and discover more amenable potential for the situation: another 1000 feet of ice, but this one kicked back a bit, and totally classic. 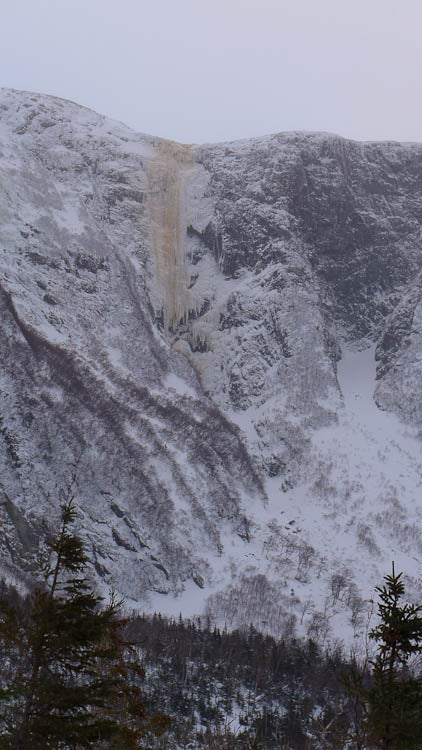 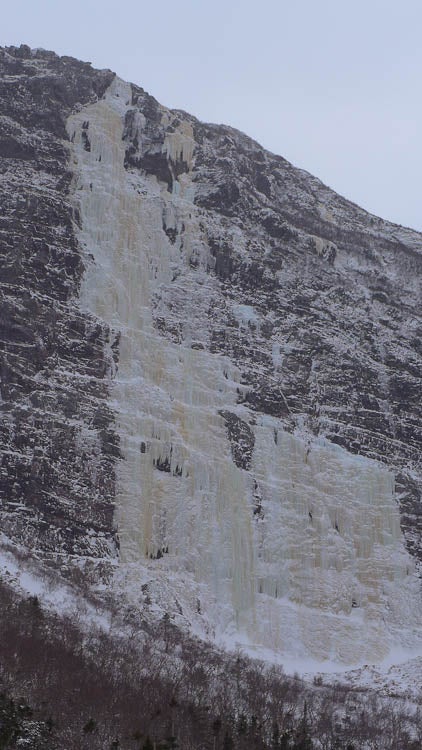 (Two friends, Joe Terravecchia and Will Carey, came in and climbed the steeper line just a few weeks later for its first ascent, also ticking off other new routes here. After our visit and in yet another act of Newfie hospitality, the locals cleared a snow machine trail over the vegetated highland to get snow machines up into the valley, shortening the approach by hours.)

The next day we snowmobiled as far as we could, and this time, skied back into the valley. I was feeling much better after a sober night and a solid meal of moose meat. (The b’ys had left us a duffle bag full of the tasty stuff, which I’m noticing is a reoccurring theme in Newfoundland travel.)

The wind was howling in the predawn darkness as we crossed a small snow-free pond at a narrow point in the valley. I watched one of my companions get taken a quarter mile by the wind across the bare surface to the other shore, at about 45 degrees to the direction we were trying to go.

Once around the corner of this dog-legged valley and with our objective in view, sheltered birch trees began to appear and the wind became background noise. Suiting up at the base of an ice climb on a cold day, taking a dump and getting racked is never a fast or appealing process. The colder it is, the longer it seems to take. Eventually the ropes were laid out in a mini bergshrund and Ryan was flying up the first pitch.

As is often the case on big objectives, what I thought was 100 feet up to a stance turned into 70 meters. Despite the low single-digit temps, fresh ice was forming and staying dry was the major route-finding objective on the 50-yard-wide flow. The saturated ice, however, made for forgiving conditions on this double-puffy sort of day. At least it was for Ryan and I, but not Chris. When I look at the photos from the route—us, in our layers of insulation, and Chris in his skimpy Gore-Tex shell—it looks like two different days. But it wasn’t, and by the end of it Ryan Stefiuk, Chris Beauchamp and I had climbed a new 1000-foot WI 5 that would be a North American classic - if it weren’t in Newfoundland. For all but the last pitch, 3-4 parties could pick separate lines and never get in each other’s way. 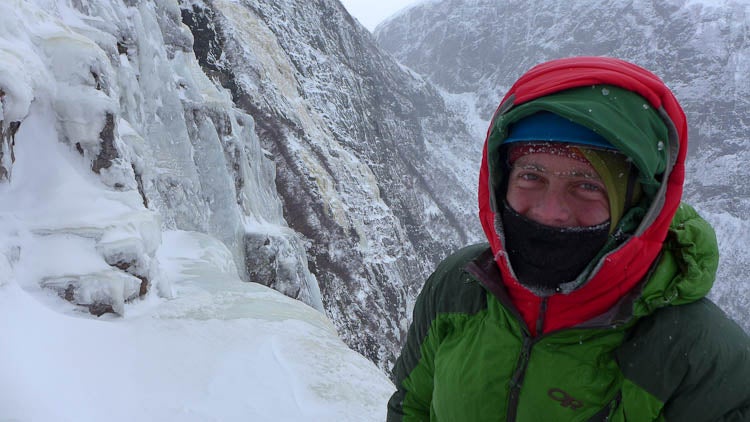 We got back to the cabin in the dark, around 8 p.m., and the b’ys were there waiting and they were concerned. Bevin, pulled me aside and told me that we should have let him know we would be getting back late. They felt responsible for us. We kicked ourselves for not clearing that up, or leaving a note, fully knowing we would be in for a long day. Looking back, Ryan remembered the Newfoundland veteran Joe Terravecchia cautioning him that you have to be clear with the locals, because if they think you’re in trouble they will try to get you. Lesson learned. This crew had never been around climbers before, and to them it seemed obvious that unless there was something wrong, why-the-hell-else would they be out there still instead of back in the warm cabin with a cold beer? 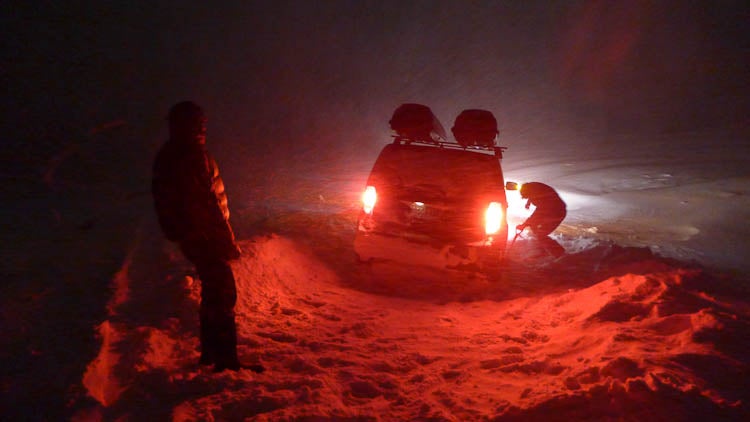 We didn’t quite make it home unscathed, a 4 a.m. snowbank session somewhere in New Brunswick.