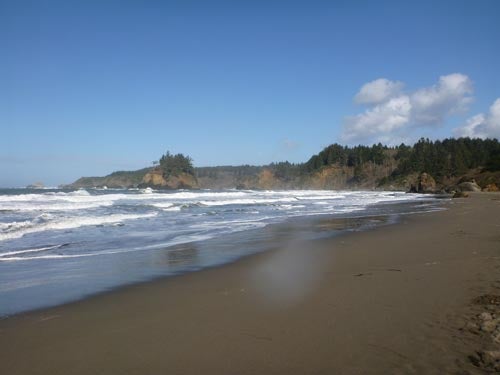 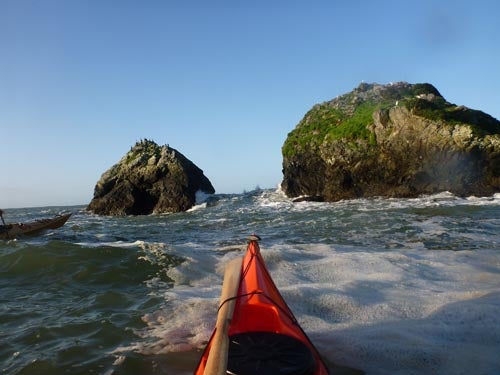 I love traveling, I truly do, but one thing that traveling does for me is make me appreciate home, my friends and Trinidad, California, my home waters.

After the Golden Gate Sea Kayak Symposium earlier in February, I took the rest of the month off to enjoy being home. For my husband Mark and I, kayaking “season” gets busy again starting next month, so I’m soaking up as much of home as I possibly can.

Last Sunday, our local kayaking club, Explore North Coast, had a rescue practice day at Trinidad. Conditions were a little wonky, to say the least, with forecasted swells of 14 feet at 13 seconds. One thing that’s nice about Trinidad, though, is that it has both a harbor launch and a surf launch, so there’s usually a way out no matter what the conditions. In the nine years I’ve been paddling here, I can only recall a couple of days when we were unable to launch and went for breakfast instead.

I met my paddle pal Michael Morris for a before rescue practice paddle, and the two of us headed south to go around some of the larger rocks. This was not a good day for rock gardening, and as we went around one of the larger rocks we had to pick up the speed a little as a large swell started to crest. As we dropped down the other side, I couldn’t help but smile. I LOVE Trinidad.

After going around a few more rocks and stopping to watch the waves crash in amongst others, we headed back to the beach to meet up with the Explore North Coast group. We didn’t land, but instead sat back and watched as everyone made their way out.

Mike Zeppegno and Damon Maguire were the hosts of this paddle, and they had several exercises for people to practice, including both assisted and self rescues, as well as rescue scenarios in rocks using both towlines and swimming. It was a great day to practice skills, but an even better day to be home, on the water and with friends.