How Bibliographie Made Sean Bailey Rethink His Projecting Strategy 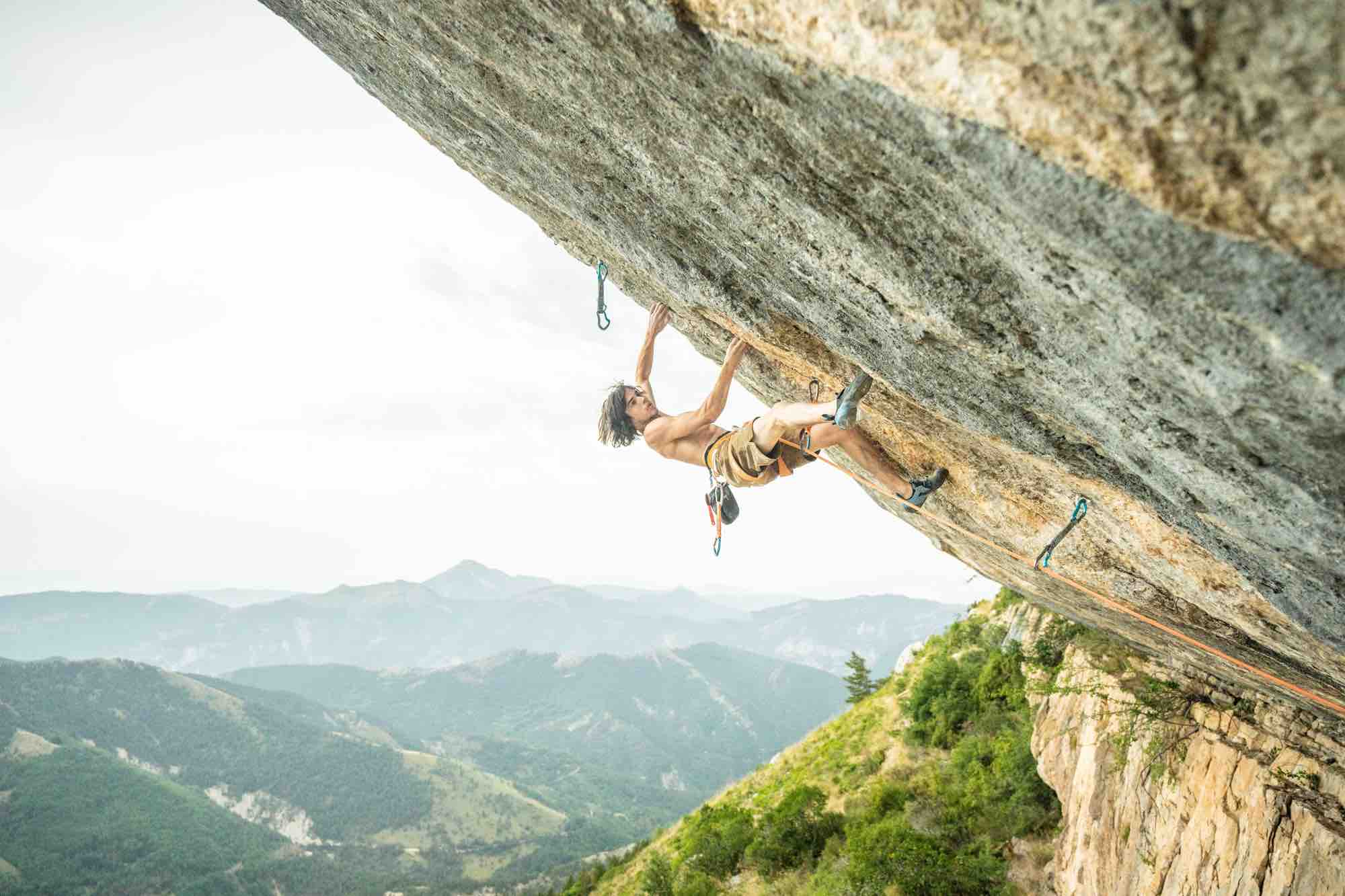 Up against the toughest route he'd ever tried, Sean Bailey found what had always worked before might not get him to the top this time.

The clock was ticking when Sean Bailey started working out the moves on Bibliographie—one of the hardest sport routes in the world—in Céüse, France. Following a World Cup competition, he had about eight weeks before his visa expired. And coming off the World Cup, he wasn’t exactly in shape for the longer route, which so far had only been climbed by first ascensionist Alex Megos and Stephano Ghisolfi, who’d agreed on a 5.15c rating. (Ethan Pringle bolted the route in 2009, and Megos had originally suggested a 5.15d rating.)

Fully aware of those limitations, Sean laid into Bibliographie, the hardest route he’d ever tried (“Magnitudes harder than any 9a+ I've done, almost incomparable”). With only two days left, he sent the route—but not before Bibliographie transformed the very way he thinks about projecting in general. We chatted with Sean to get all the details.

How was it, diving into a big project like this immediately following World Cups?

“The whole season, I was training for short power endurance, like the 30- to 45-move range. World Cup goes fast—you have six minutes, but it's rare that you use that much time. It's more like power endurance style. So it was a bit of a transition trying to get used to climbing a little longer route because I didn't really have time to train for it specifically.

“The first two to three weeks were a lot of just trying to gain fitness and get used to being on the wall for 15 minutes, compared to the short routes I was used to. I was almost treating the first two or three weeks as training, just trying to spend as much time on it as possible and running laps on sections and getting it pretty wired in while also trying to build some fitness on it.”

Can you describe the route for us? What’s the climbing actually like?

“The most interesting thing is how varied it is. The bottom is 14a-ish to maybe the 40-foot mark, into a really good rest. It's like the best hold on the route, pretty much full recovery, but you're still on your hands or your arms so it's not like you're standing on the ground, but it's pretty good. Then it goes straight into something like an extended V13 boulder, if you look at the whole first crux, or  it's like an intro sequence into a three-move V12 boulder. Then you have a few moves of easier climbing, and you're into a good rest. Well, not a good rest, but like a learnable rest. It took me a long time to figure out how to make it work. But it's the last break you get. And then you have a 20-something-move 9a sequence to the top.”

“If you're more of a boulderer, the bottom is not going to be your crux because you do have a pretty good rest into the first crux. So, if you have boulderer power endurance style, I think you can get through that okay. And for me, I got through pretty quickly. I was doing links for a long time on the top and then eventually started trying from the bottom. I think the second day from the bottom, I was able to get through the crux and into the rest. But I wasn't able to use the rest that well. I'd seen Stefano on it, and he was spending four minutes in there, just seemingly getting fully recovered. It's pretty insane.

“Then you have this hard crux, like a V12 boulder. I got through pretty quickly into that next rest, which is the worst of the two. Then I just couldn't get enough energy back, and was falling on the final boulder of the top crux, which is maybe like V9, bbut you're just so pumped and you've been on the wall for a long time at this point.

“So I was falling up there for essentially a month. I was getting pretty good at doing the bottom, so I would do it either the first or second try of the day. I'd warm up and then I'd give my try and get through the bottom and get pumped out and fall on the last crux and then take a rest day and then do the same thing the next day.”

On Instagram, you said, “Essentially I was getting one try every two days. It felt like I was resting more than climbing.” How did that affect your mentality?

“Yeah, the rest days felt long, that's for sure. I went through so many phases. At first I was climbing really well on it, bouldering well. So I was pretty psyched. Then a little further into the process, I felt some regression and I was not so psyched for a few weeks. By the end, I was struggling for sure. I just wasn't really feeling like I was climbing that much, which was frustrating. And I did have this time constraint.

“The last week or so, I was pretty psyched because I had one go where I fell on the last move, and it's like a V3 move, the exit of the last boulder crux. At the time I was really mad that I had fallen there because I was like, ‘Oh, I know I can do it now—I shouldn't have fallen on that move.’ “

So the pressure’s really on at that point?

“It took me 12 days or something to get back up there, so it definitely turned into a nail biter.”

How much time did you have left when you finally made it up there and finished the route?

How did that pressure affect you? How were you managing that?

“It was funny, because it was all this pressure and stress was building, but by the end I knew I could do it—I just needed to be calm and try my hardest and just let it happen. It was like this building tension at first and then just almost not caring by the end, just letting whatever happens happen.”

How did your strategy work out in the end?

“And the day I did it, I was pretty relaxed and I was just going through the motions of climbing. I got into the first rest, felt okay. I got into the second rest, felt pretty good. And slowly, the mentality started changing back to, ‘Okay, you've waited for this moment, this is it—let's seize the opportunity and let's fucking do this route right now,’ you know?”

So you basically stepped back from the goal and focused on the process instead?

“I think what I found hard about being on the same route for such a long time, is you build up all these experiences on it and these expectations of how it can feel, like if it feels worse than it did the last time or better. There's all this information, and you can use some of it to your advantage. But I think a lot of times it can distract you. You think, ‘Oh man, I don't feel as good as I felt the last time I was on it,’ but just focusing on that specific moment and not really caring whether it felt better the other day, or the conditions were better the other day, or whatever it may be, but just focus on in this very moment, climbing the best that you can.”

Did anything throughout that whole process really surprise you?

“Yeah, I don't even know how to put this, but I think I've found that I've done a lot of things that are pretty hard for me pretty quick by having this confident mentality, like, ‘I know that I can send.’ And it's worked pretty well for me for up to months of projecting. But I think past that, I noticed it gets tiring for me to keep up.

“I'd never really tried this mentality of just letting it happen before. But I think that release of control, just focusing on being super, super present and just on the movement itself worked really well. And the fact that I was able to maintain that mentality for even weeks on end, it was cool.”

So, breaking through to a different side of motivation or a different technique mentally?

“Yeah, exactly. I think that at the end of the day, whatever mentality allows you to be present is going to be the best ... Well, present and able to try hard and not fixated on how it feels—but just letting it wash over you and focusing on the movement.”

“I would love to try to find a project that I think will challenge me. Maybe even a multi-year project. I want to search for it and then hopefully just start the process of figuring it out. Ideally I'd like to find something I can go through a month or a month and a half of learning and figuring out what it's about. And then almost spend a whole season trying to prepare the best I can for it. And then have another month or two to try to put it down.”