How To Enjoy Fly Fishing As A Beginner

I’m standing on the banks of a crystal-clear alpine lake, surrounded by craggy peaks and cheerful wild columbines swaying in the occasional gentle breeze. Normally, this is the sort of scene I let my mind wander off to when I’m feeling stressed or overwhelmed, but on this particular afternoon, the frustration is actually here.

I’m standing in a thicket of willows, attempting to untangle my fly for the umpteenth time in the last half-hour, covered in itchy mosquito bite constellations.

“How’s it going over there?” calls my husband, who, annoyingly, appears impervious to bug bites.

“I hate fishing,” I mutter under my breath, then holler back: “Great! I think I’m getting the hang of it!”

I was not getting the hang of it. 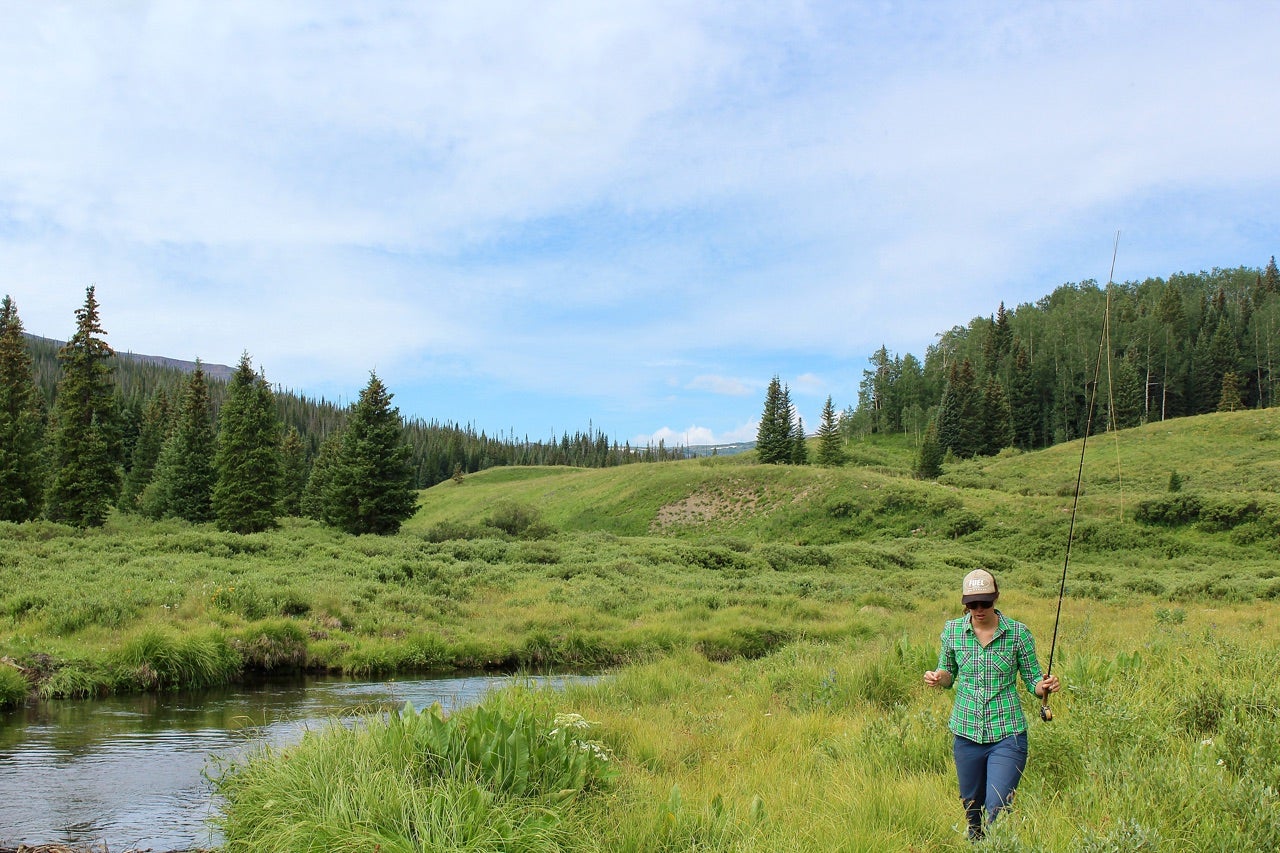 To be fair, I hadn’t fished much before I met Bix. The few fishing-adjacent memories from my childhood mostly involve people telling me not to talk so much, lest I scare the fish away, and an annual no-girls-allowed family fishing trip on which I desperately wanted to be invited—on principle, not because I had any interest in the fishing itself.

Over the last four seasons or so, I’ve made considerable progress. The time I spend picking my line out of the bushes is now roughly equal to the time I spend successfully casting into the intended body of water. I generally lose no more than three or four flies on a standard outing. I still get a sinking feeling, no pun intended, when I realize I’ve got a fish on the line; now I have to remember what to do. (These days, at least, I can usually at least pretend it’s because I’ve been casting well, as opposed to dumb luck.)

I still wouldn’t say I’m an especially good angler, but I do have the advantage of having made every imaginable mistake, which has to count for something, right? Here, then, are some snippets of fly-fishing wisdom from someone mostly (though not entirely) unqualified to dispense advice. 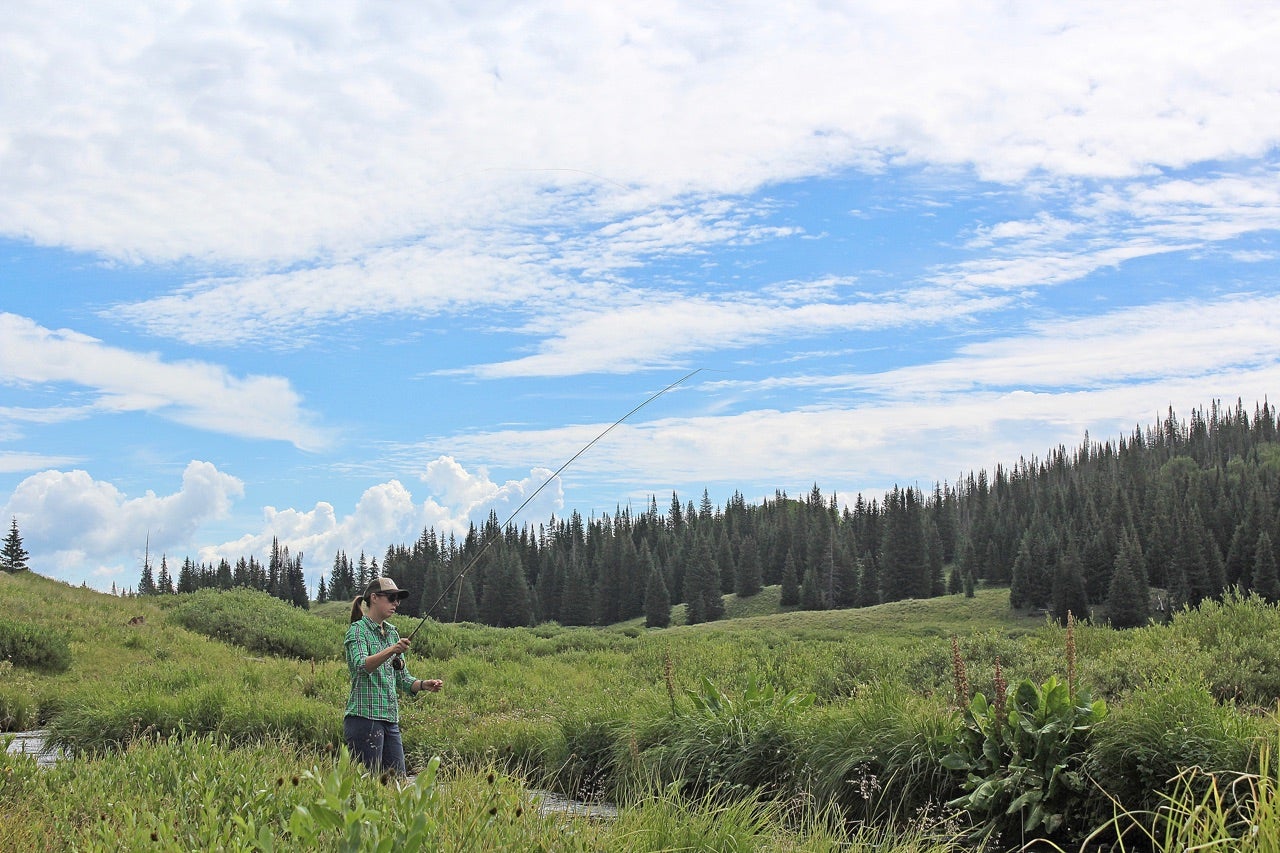 1. It’s not going to look like A River Runs Through It

When I picked up rod and reel for the first time, I assumed I would immediately emulate the swooping, symmetrical casts I’d seen in the movie version of Norman Maclean’s A River Runs Through It, in which the stars are forever pulling in impressive trout specimens and depositing them in quaint wicker baskets. On my first outing, I made exactly one such animated cast (“Look!” I shouted, “I’m Brad Pitt!”) and immediately felt a sharp pain. Instead of hooking a fish or even landing my fly in the serene alpine lake, I’d caught my Parachute Adams in the back of my own neck. Lesson learned—I spent the rest of the afternoon swishing cautiously between ten and two on an imaginary clock, then graduated to aiming for a spot in the lake. It was, in retrospect, pretty presumptuous to think I could learn in one afternoon what anglers take seasons—lifetimes—to learn. I have a tiny scar on the back to serve as a reminder.

2. The devil’s in the details

I guess it shouldn’t be surprising that Norman Maclean spends very few words in his book addressing the tying of flies onto one’s line. It doesn’t make much of an appearance in the movie version, either—I, for one, want to watch Brad Pitt hiking upstream in his waders and looking sultry, not fumbling with a microscopic synthetic caddis fly. So the amount of time it takes to get the blood knot just right was another surprise. As with most things, though, the least glamorous parts of fishing are also some of the most crucial. When I finally get a bite, I don’t want to lose the fish because I was in too big a hurry to tie my knot properly. “Measure twice, cut once,” my dad always says, and it’s true: making the effort to do it right on the first go saves time and frustration in the end. 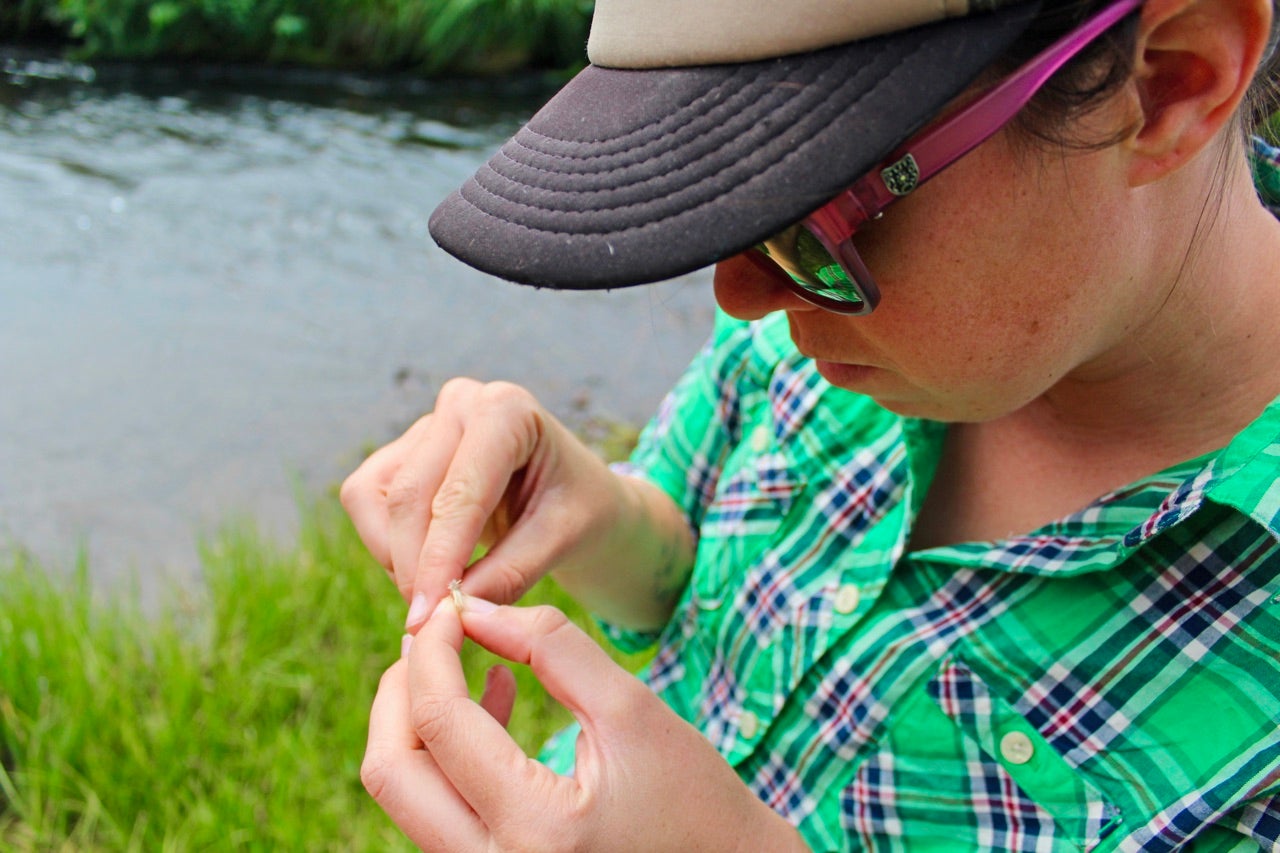 If you want to know what conditions are like—how the weather’s been, how high the streams are flowing, whether the bugs are hatching—ask an angler. Good fly-fishermen know what’s running and what’s hatching; whether fish are hiding in deep pools to escape the heat; where to stand, depending on the time of day, so their shadows don’t scare the fish away. They certainly don’t chatter away at their companions or wonder aloud when lunch will be. Anglers make decisions slowly and deliberately and based on many hours of quiet observation. It’s funny how changing your perspective can make what seemed like a problem look a little more approachable. I am working on applying this sort of logic to my marriage.

The first time I caught a fish on the fly, it was a complete disaster. Despite that I’d been haphazardly casting all afternoon, I was entirely unprepared for the possibility that I might actually catch anything. “Bix!” I shouted, “What the hell do I do?” The dog sprinted over, barking joyously to alert us to the fact that there are things you can chase in the water, too! My husband calmly instructed me to grab it behind the gills—this matters more with bigger fish than with the teeny five-inch rainbow trout I’d snagged—and pull the barb out in one swift movement. This is easier said than done, as fish are predictably slippery. (Again, not sure what I really expected.) I watched as its sides, peppered with colorful freckles, heaved in and out, then remembered to stick it back in the water, parallel to the current. It is not often that we get to have such intimate encounters with wildlife, and it’s oddly humbling to be trusted with that sort of power. Even if it’s an accident. 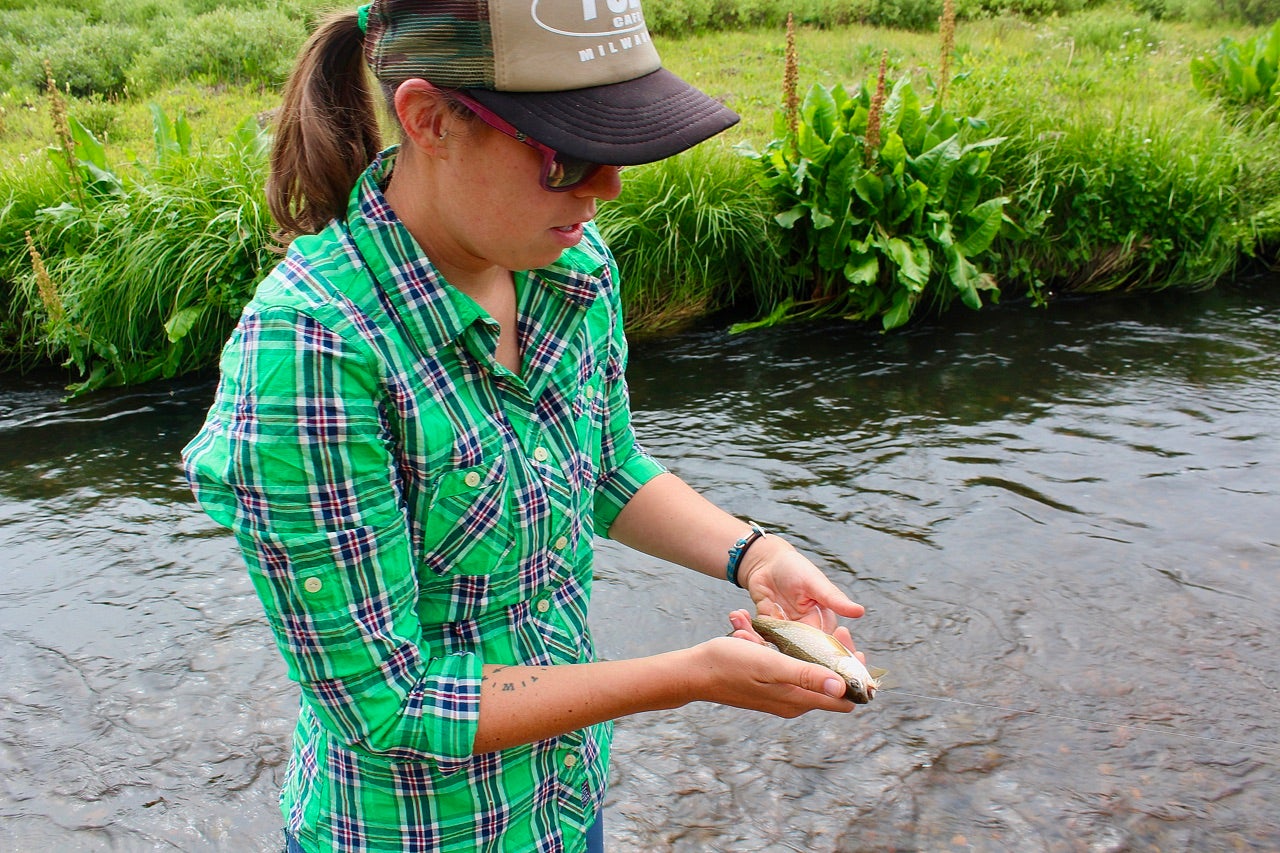 5. Fishing is for everyone

On a given summer day near my home in Golden, Colorado, Clear Creek is teeming with fishermen. I don’t mind the crowds. This is one of my favorite things about fishing, actually: I can think of few other activities that are so cross-cultural and cross-generational. Over the white noise of the rushing Creek, I can hear families instructing their children in other languages, kids laughing and splashing (and, in my own childhood tradition, scaring off all the fish), parents and grandparents chatting and cracking open cans. This is an activity people have been doing all over the world in different ways for countless generations, and it is alive and well. My husband learned to fish from his father; I imagine we will someday teach it to our own offspring. They can talk as much as they want.

6. It’s not about the outcome

I’ve caught a handful of fish on the fly, but most of the time, I come home empty-handed. This is not just because I’m typically catching and immediately releasing. At first, I didn’t see many parallels between fishing and an exciting, fast-paced pursuit like, say, mountaineering. (Ha!) But, like many of my other favorite activities, the process matters more than the outcome. Sure, you might eventually stand atop a summit or catch a fish, but that means very little if you haven’t poured blood, sweat and tears into it, preferably literally. On my very worst fishing days—which is to say, any day I haven’t caught anything, so, most days I fish—I’ve still spent a day outside.