I Used To Hate Ice Climbing 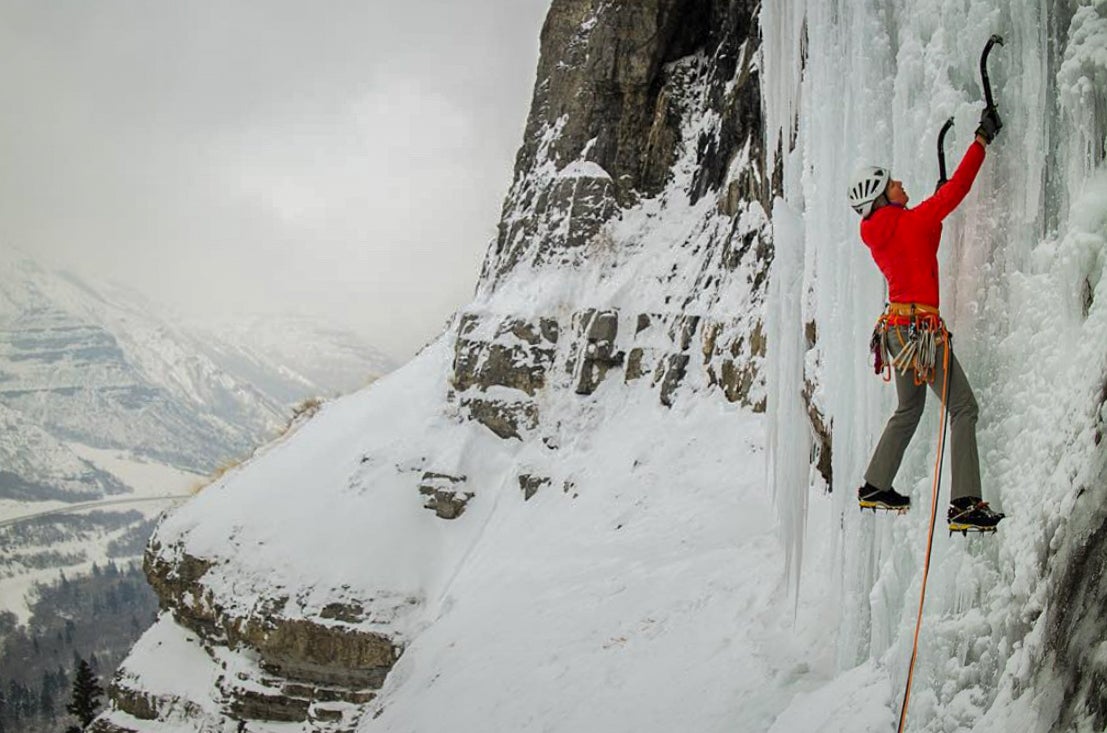 My first venture into ice climbing was nearly my last. Not because I almost died. (Well, not quite.) But because I did everything so ineptly that I was led to believe this was a sport with no redeeming qualities.

Outfitted in the latest, greatest borrowed equipment—straight-shaft Black Prophet ice tools with not one, but two, adzes, 10-point mountaineering crampons (the strap-on kind), and oversized, plastic Koflachs, circa 1992—I was told I’d find top-roping at Exit 30.

Exit 30 is just what it sounds like. A highway exit off New York state’s remote Northway in the vast Adirondack Park. Just south of the Canadian border, the crag itself is tucked away in the woods and is locally infamous for having, perhaps, the country’s first traditional M10/WI6 route, The Fecalator.  First climbed by Chris Thomas, Ian Boyer, and Will Mayo way back in 2003, it has still seen only a handful of repeats by those who are very talented and very determined. It was named by charismatic local Matt Horner for a futuristic weapon that would make the recipient instantly soil themselves, and there certainly isn’t easy top-roping to be found nearby. Going to Exit 30 as a first-time ice climber is guaranteed to either inspire you—or defeat you. Either way, you probably won’t be getting off the ground.

So with little other guidance, my equally inexperienced climbing partner and I set off to see what ice climbing was all about. Wandering up the on-ramp toward a road cut, we both wondered if we were in the right place. This seems so close to the road, is this even legal? Semi trucks thundered past at 75 miles an hour, spraying us with slush and road salt as we marched down the shoulder, convinced that this is what ice climbers did. After a short walk we arrived at something that looked like it might be climbable: a steep runnel of delaminated ice topping out on a shrubby ledge 50 feet up and 20 feet from the highway. There was no sign of anyone having ever climbed there before, but that didn’t dissuade us. My partner offered to lead, which was bold considering he had never climbed ice before. Thirty minutes later, a body length off the ground, it became obvious that this wasn’t going to be easy. He came down; I went up. Curious onlookers slowed their vehicles to stare.

It only took me a few minutes to start to hate ice climbing. Most of all, I was cold. Cold from belaying, cold from the wind of speeding traffic, and cold because I had no any idea what a belay jacket was, let alone own one. The tools felt heavy and awkward. My mittens offered no dexterity, and my strap-on crampons threatened to defect at any moment, likely taking my oversized boots along with them. Only six feet off the ground I came to a paralyzing bulge of ice that no amount of knuckle smashing could overcome. My arms weakened. My hands went numb. With no strength left to pull up, I slithered out of the leashes, leaving the mittens and axes behind, falling in a graceless heap at the bottom of the climb.

RELATED: How To Be A Better Ice Climber

Now, 15 years after that first futile attempt, I cringe at our incompetence and laugh at our blissful ignorance. Fortunately, I survived those formative years and learned from my mistakes. Ice climbing can be a dangerous and deceptively subtle undertaking. But as the above story should demonstrate, the simplest fixes can positively influence the outcome. If I were to go back in time—or, advise someone else clueless and new to the sport, I’d say:

With judgment born from a depth of experience, it’s rare that I find myself in desperate situations these days. Which is not to say I’m infallible. Rather, I’ve come to the slow but obvious conclusion that experience will always trump strength, boldness, and ignorance. After all, success is the result of accepting a certain level of failure and then learning from what you did wrong. I may not ever use straight-shaft, leashed ice tools again, or try to climb scruffy, interstate road cuts, but the ephemeral nature of ice and the challenge of moving through mountains are the redeeming qualities of what once seemed so unattainable.