I Wish I Knew How To Quit You 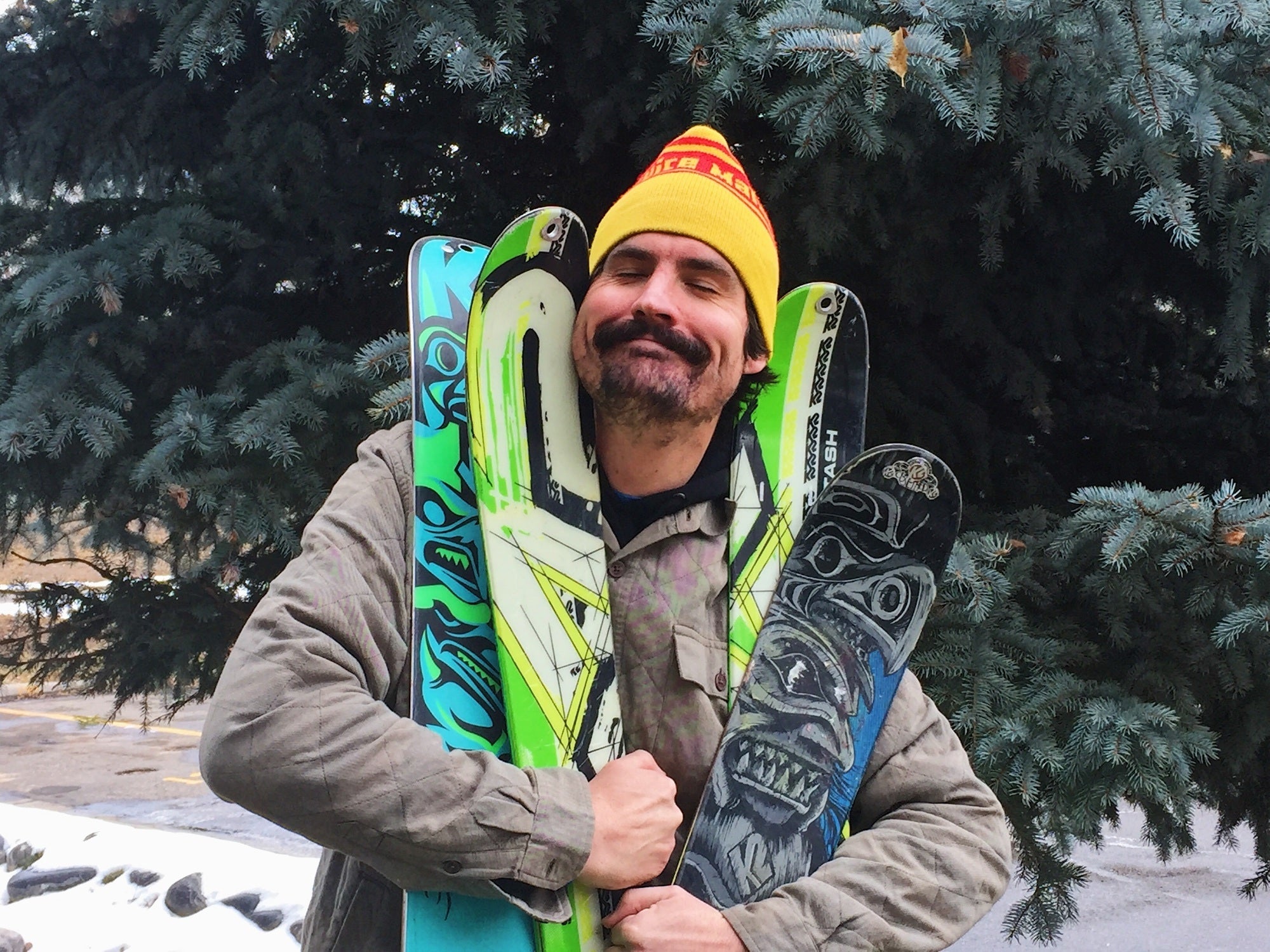 I own the world’s ugliest pair of skis. I’ve poured pounds of P-tex and wax on them. They’ve been drilled and mounted within an inch of their lives. I’ve slashed turns in hip-deep powder in them, scraped them over shark-fin scree and slammed them into logs. They’ve been skied flat and dead. I can’t even remember when they last had bindings on them. But still, I’ve been lugging these beat boards around with me for years now—I just can’t bring myself to throw them away. No—I am a skier and we don’t ever toss our skis.

I tell myself I’ll use them for something else, repurpose them for a handyman project. As if suddenly I’ll be miraculously bestowed the skills to build benches out of old skis. But even something as easy as a coat rack—which I think would merely take a handful of nails and a hammer—seems a paltry second life for these sticks. The truth is, as silly as it sounds, I feel an emotional attachment to them. I’d even say we’ve built a real friendship: They’re great listeners (yes, I talk to my skis), they’re supportive and challenging, we share similar interests … we just get one another. And unless you’re a heartless dillhole, you don’t throw away your friends.

To be clear, I have the same struggle with t-shirts. I once had an hour-long fare-thee-well conversation with a pitted out Salvation Army tee. It was a totally kickass shirt, yellow 50/50 cotton-poly blend softer than angel feathers, and on the back: a glittery screen-printed Harley Davidson logo with the motto, “I’m a lover, I’m a fighter, I’m a Harley rider,” hanging below the nickname of the original owner, Scooter. Throwing that shirt out was strangely difficult, though it had long been stricken from weekly rotation. Pit stains, a sharp smell that couldn’t be washed away, worn nearly see-through, it had become unfit for public wear, too gross even to wear camping. It had to get tossed. But did it, did it really? The decision still haunts me.

I have more retired skis than I know what to do with. At this very moment, a battered pair of Obsethed is leaning against the wall of my garage. Their topsheets are covered in crusty waves of epoxy from tip to tail. A few years back when I was patrolling at Telluride, I entered into a season-long prank war with one of my best buds and co-patrollers. The jokes started out pretty tame, lunchmeat in the pockets of his uniform and glitter bombing my ski boots—but the severity progressed quickly. After I hid a severed pig’s head in his locker, Wiley kicked it up to a new level. He glued cards all over my skis—playing cards featuring pictures of naked, shockingly endowed men. My work skis were home to multiple oily body builders whose loins seemed to be experiencing a ballooning allergic reaction. It was a disturbing site, but I choked on laughter while I pried the cards loose with a screwdriver. Even if I never use them again, I just can’t throw out a pair of skis with a story like that.

My old skis are survivors. During any number of my moves, I’ve easily discarded trashbags full of smelly buffs, tired ski jackets, beat-up trail maps, forgotten jerky and half-used tubes of sunscreen. From the Midwest to Colorado, Colorado to the Midwest, and then, of course, back to Colorado, I’ve cut my belongings down to whatever I can fit in my Subaroo and one of those mini UHaul trailers. And while I’ve been ruthless with other things, my planks always make the cut. Even when I lived in a tiny, storage-less apartment in Denver, bulging with gear, I found room for skis that resembled a dog’s chew toy. I leaned six pairs of planks against the wall next to the dinner table.

Call me a weirdo if you want. I love these planks, and I refuse to sentence them to a slow death in a landfill. I feel bad enough that they’ve already got to hear about adventures from the other skis. “You’re lookin’ pretty snowy there, Steve. Must have been a great day out there. Oh, you and Paddy went for a tour, huh? It was really deep, eh? That’s cool. I’ve just been here collecting dust, listening to Seth talk about how he used to be covered in photos of naked dudes.” I mean, c’mon! I just can’t shake the thought that someday, even though they’re lifeless and look like hammered shit, I will ski them again. You know, I should probably mount those puppies up. They’ve probably got a few more turns left in them. Or maybe I should make them into a rack for my townie bike. Yeah, I’ll keep ‘em around a while longer.