The Making Of A Climber: Russia, Montana, Brooklyn And A Stubborn Attitude 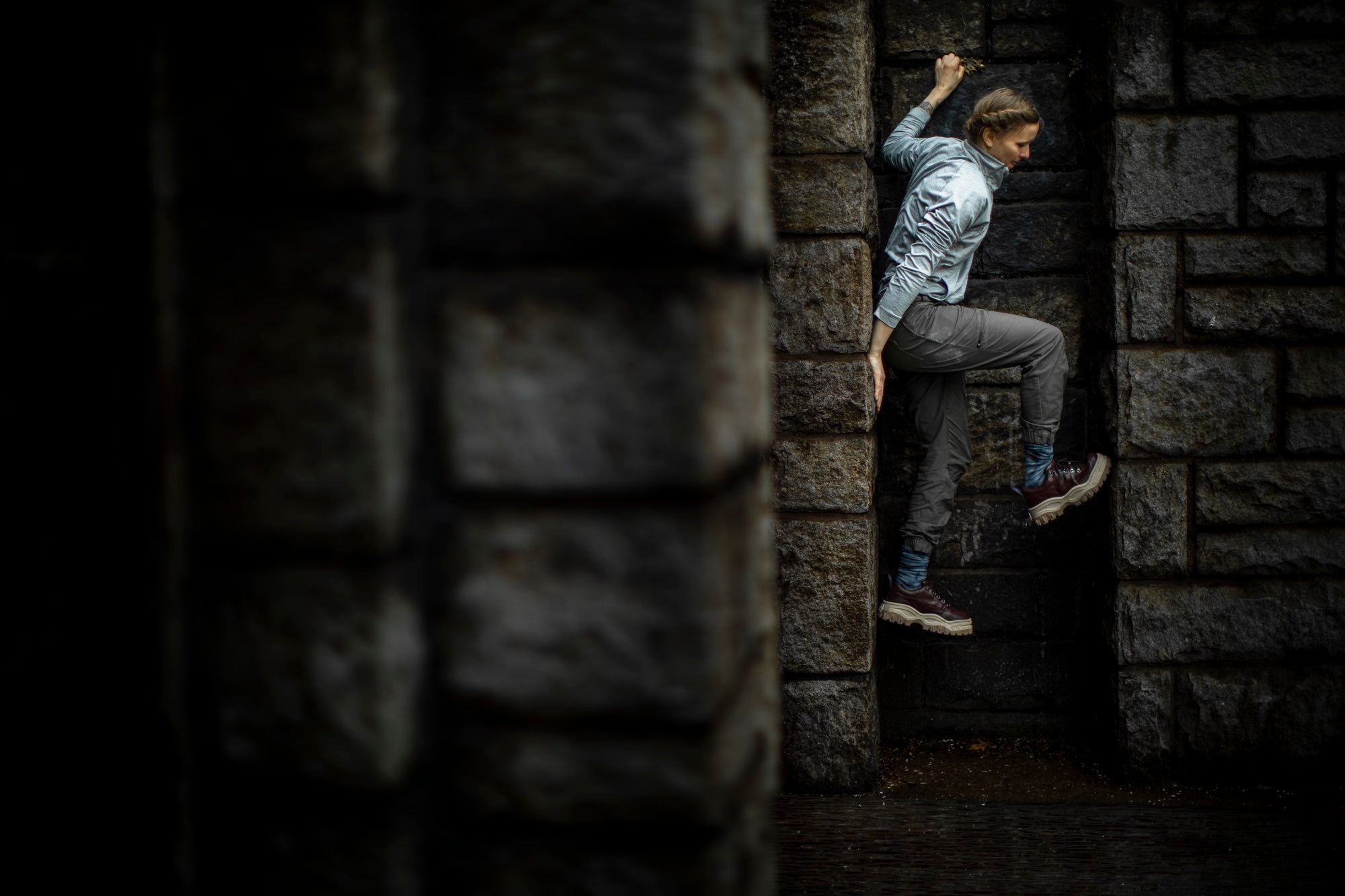 In The Field With: Climber, Artist and Software Engineer Aleks Shineleva

For Aleks Shineleva, visiting her grandma in Crimea was an eye-opener. Having moved from Russia to New York City when she was 13, going back to visit the Crimean Peninsula was a reminder of all the different ways there are to enjoy the outdoors—and how much climbing had shifted her life.

“We used to go and spend every summer there when we were kids,” Aleks says. “My summers were me sitting on the cherry tree on her property eating cherries off the tree, picking peaches or just going to play in the woods and building weird structures out of sticks. So to me, that was outside.”

At 24, when Aleks returned to visit her grandma, her eyes saw something different: those mountains. “The crazy thing is, I've seen the mountains, right?” she says. “We've gone hiking and mushroom picking and done all those things. But I never thought, oh somebody could climb that.”

This time, she’d brought a rope.

A fleeting sense of enlightenment, and the road trip that changed everything

Aleks’s journey to climbing started with a night of substance-induced deep conversation with friends at age 18, she says. “We had an experience of enlightenment and we're like, ‘We should go on a road trip. We should quit our job and we should go road tripping, experience our life outside the daily grind,’ ” she says. And they did. Except instead of the five or six people who’d been part of the conversation originally, it ended up being just Aleks and her boyfriend at the time. For the others, she says, it was more like, “That was like a fun conversation we had last night, but uh-uh.”

She and her then-boyfriend mapped out a trip and hit the road, hiking and seeing the U.S.—and it was the time they spent in Glacier National Park that shifted the course of her life. Deep in the backcountry on a multi-day hike, Aleks and her boyfriend ran into two people who were on their day off from working at a local cafe. They were doing an overnight backcountry trip on their days off. Aleks was intrigued, looked up the cafe and applied to work there the next summer.

An unlikely mentorship and bad rock

The cafe was a seasonal tourist spot in St. Mary. “There was a woman there, who was super bad ass,” Aleks says. “Everyone was kind of scared of her, or maybe intimidated by her. I immediately wanted to be her best friend.”

Aleks had never heard of climbing before, and the woman introduced her to bouldering in Glacier National Park. “Some of the worst quality rock for climbing, that's for sure,” she says. “I loved it, though.”

She went in head first and never looked back.

Coming back to New York after her summers in Montana, Aleks got even deeper into bouldering, but indoors, building her community around it. “It was like the way people go to bars to go drinking,” she says. “We went to the gym and hung out there for six hours at a time.”

She thinks of herself as a boulderer in love with sport climbing, she says. “I would rather dangle around on the rope getting scared, but bouldering is just super easy to do when you live in Brooklyn.”

Working in the specialty coffee industry for 10 years before switching careers to software engineering in 2018, Aleks never left behind her creative roots. (She got a bachelor’s of fine arts in illustration, and particularly enjoying drawing human bodies, mostly working in oil, but exploring watercolor and gouache recently.) “I think my climbing style and my artistic style are kind of similar, it's pretty spontaneous and intuitive,” she says. “I have a hard time with instruction.”

While she self-describes as stubborn and driven, Aleks also points to her family’s move to New York from Russia as a factor in her success in life. “Making such a huge move, physically and culturally, allowed me to realize that humans are very adaptable,” she says. “We have the capacity to learn new things and new languages.” At 13, she hated the city at first. She didn't speak English, had no friends and thought New York was dirty, ugly and stupid. “Typical teenager,” she says.

But over time she grew grateful to her parents for making the decision to move. “It couldn't have been easy for them,” she says. “I am also grateful to have grown up in NYC—the city is full of culture and diversity. It is gritty, and it's honest.”

Rage climbing, and pushing friends to do their best

If you Google Aleks, one of the first things you’ll find is a Flash Foxy story a friend wrote, which opens with a scene of Aleks refusing to lower her friend on a 5.12 route at the gym until she’d worked through all the moves to get to the anchors. “My hands and forearms were useless—it was like trying to climb with marionette arms,” writes Sasha Turrentine. “I was irritated—I didn’t see the point of working the moves without the strength—but her encouragement was relentless. ‘Just do the moves so you can come back to it next time.’ I kind of wanted to throw my chalk bag on her head, but I humored her, and move by move, got to the anchors. I still don’t think it was necessary, but I value her principles, and it was worth the high-five at the bottom.”

Aleks considers how this describes her. “Tough? Maybe sometimes,” she says. “I am mostly tough on myself, more than I am on others, but others get tough love. Relentless? Probably to a degree. I enjoy pushing other people. My friends have so much potential and raw talent, not just in climbing, and I want to be supportive of them. I support them by pushing and encouraging.”

It’s that relentlessness, she says, that often gets her through her own projects, too. Throwing herself at a project over and over is her idea of fun, especially if it’s outside with friends. And, when necessary, drawing on a bit of rage. “I love a bit of rage climbing,” she says. “I mean, I do my best climbing when I'm really pissed, just because it's a healthy way of getting it out.”

And if even rage won’t do? She’ll just leave this word of wisdom right here for you:

“One of the things I strongly believe in is that failure is extremely important for personal growth and critical thinking.”

Find more of Aleks on her blog, https://crusherlady.wordpress.com/, and meet the rest of the people repping our Fall 2020 line in our "In The Field" series, here and on Instagram.