Inside One Of The PNW's Biggest Ski Adventures Of Our Lifetime 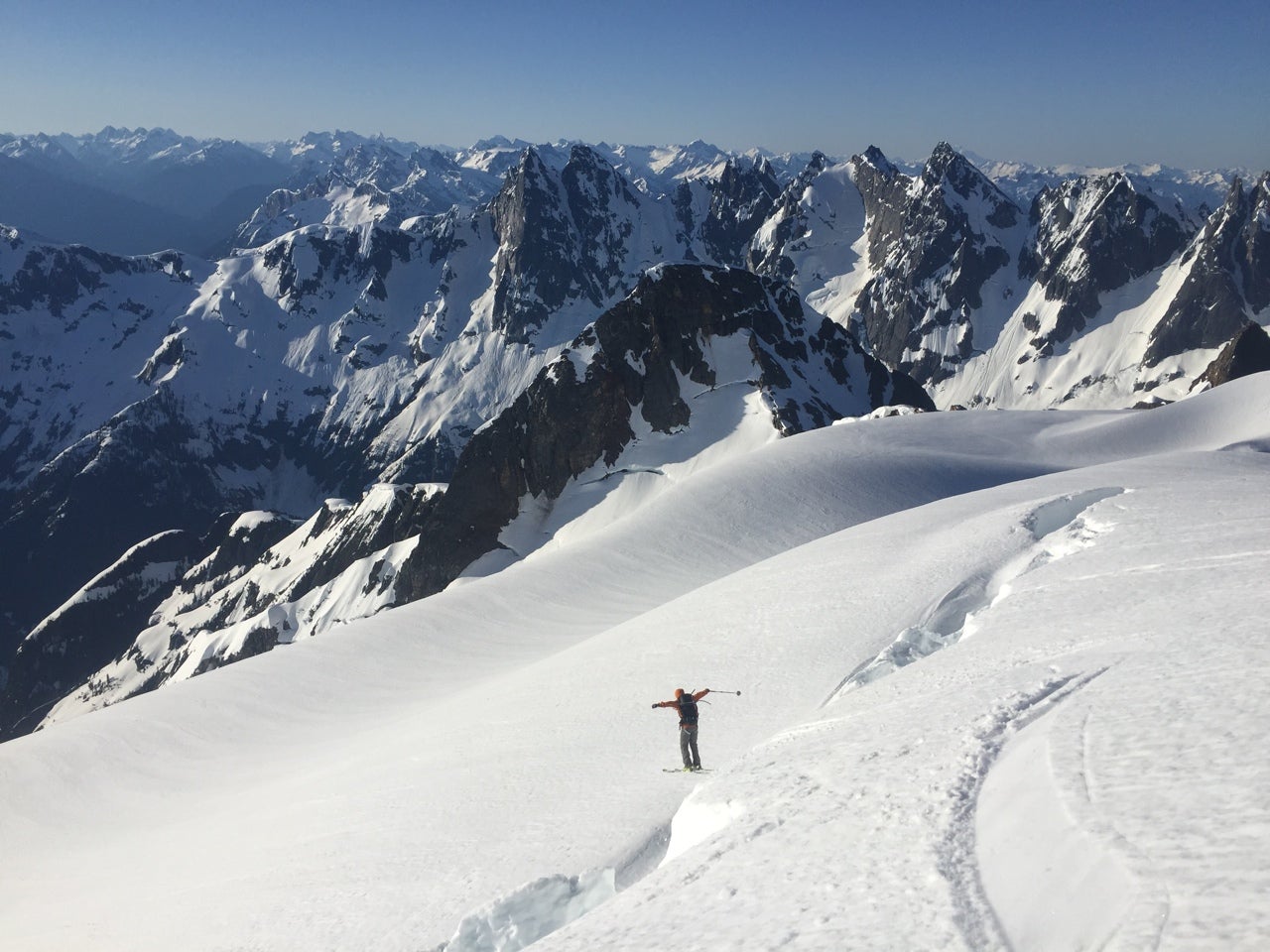 If you didn't see it in the news, this June saw a landmark ski tour completed for the first time: Trevor Kostanich and Forest McBrian, both longtime guides, skied from Snoqualmie Pass to the Canadian border in 34 days. It was a first. And it was big. Other locals, like Lowell Skoog, had been piecing the route together for decades, but the actual link-up was historical.

Trevor and Forest had been planning the trip for years, but only this year did everything come together for success. We reached out to get the backstory on one of the most next-level ski adventures the PNW has seen in a long time. Here's what Forest and Trevor had to say. 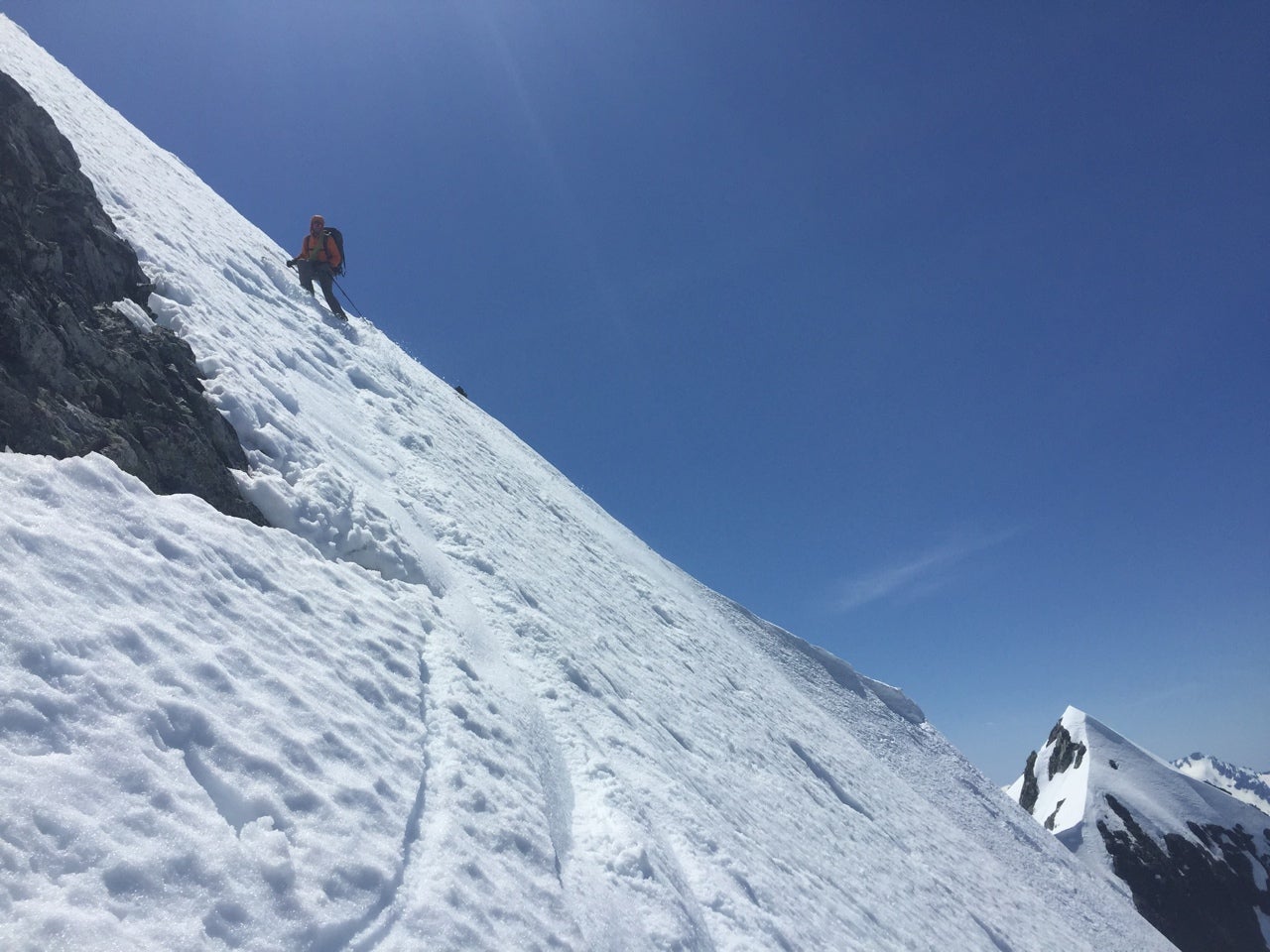 "The crazy thing about a trip like this is that you have to commit long before you will know if conditions are going to be adequate. We committed late in the summer of 2016, and kept the space open in our calendars. Keeping it open was in a sense the beginning of the effort—we had to work hard and remain connected to the dream, despite demands from work, family and friends." —Forest 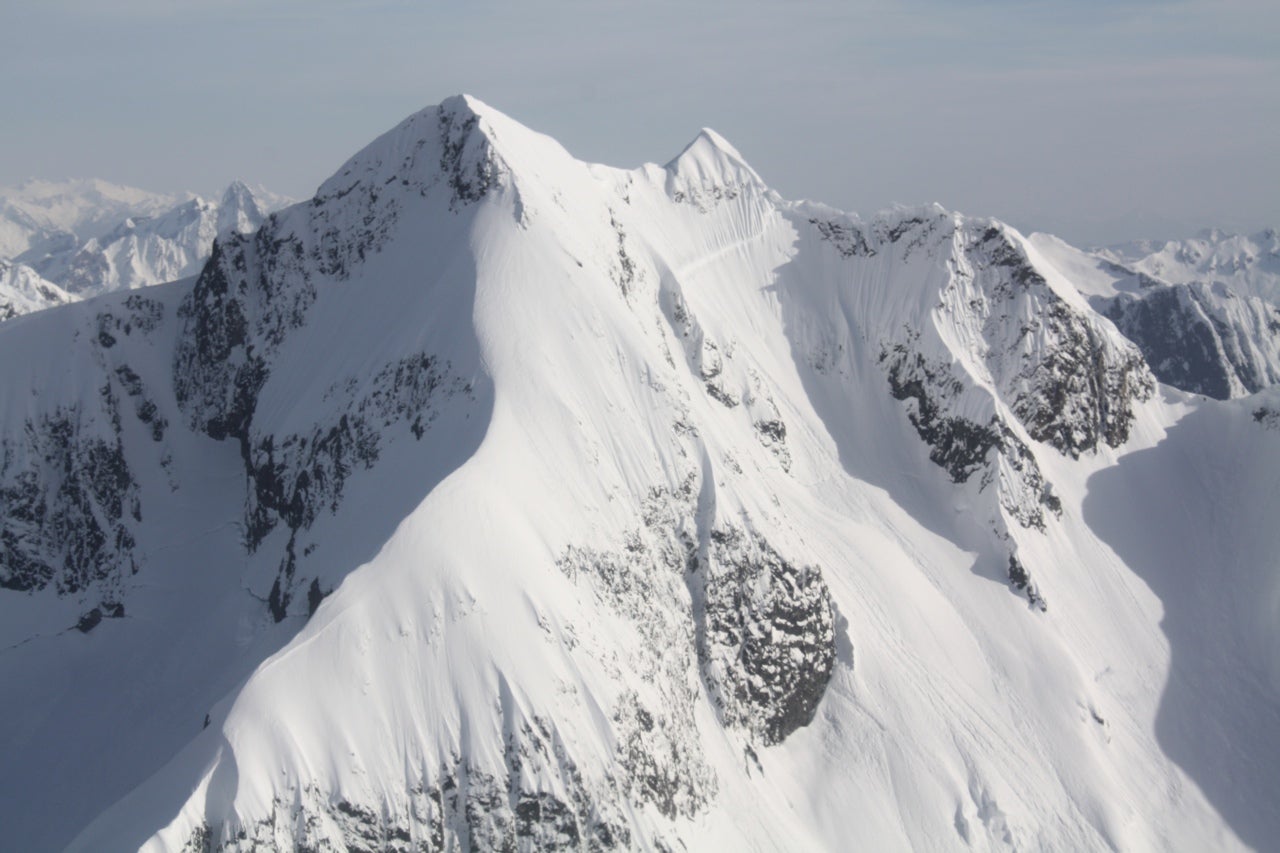 The gamble they didn't actually bet on: weather

"If you’ve been skier or an alpinist in the Cascades for a while, you know the weather in May can be fantastic or rotten; on average, it’s a mix that typically contains some stretches of clear weather ... Trevor and I both knew it could rain for days at any point along the itinerary–or all month, for that matter. We didn’t know if we could continue moving north if we got soaked–especially if it were to continue raining. Our conclusion ... is that we were not gambling at all, but accessing some hard-earned intuition developed over long, progressive, and fairly ambitious ski touring careers." —Forest

"Applying yourself to your craft pays off; seeking mentorship pays off; professional training and examination pay off. We want people to know that it is possible to grow your skills in the mountains safely and enjoyably, without epics or undue risk." —Forest 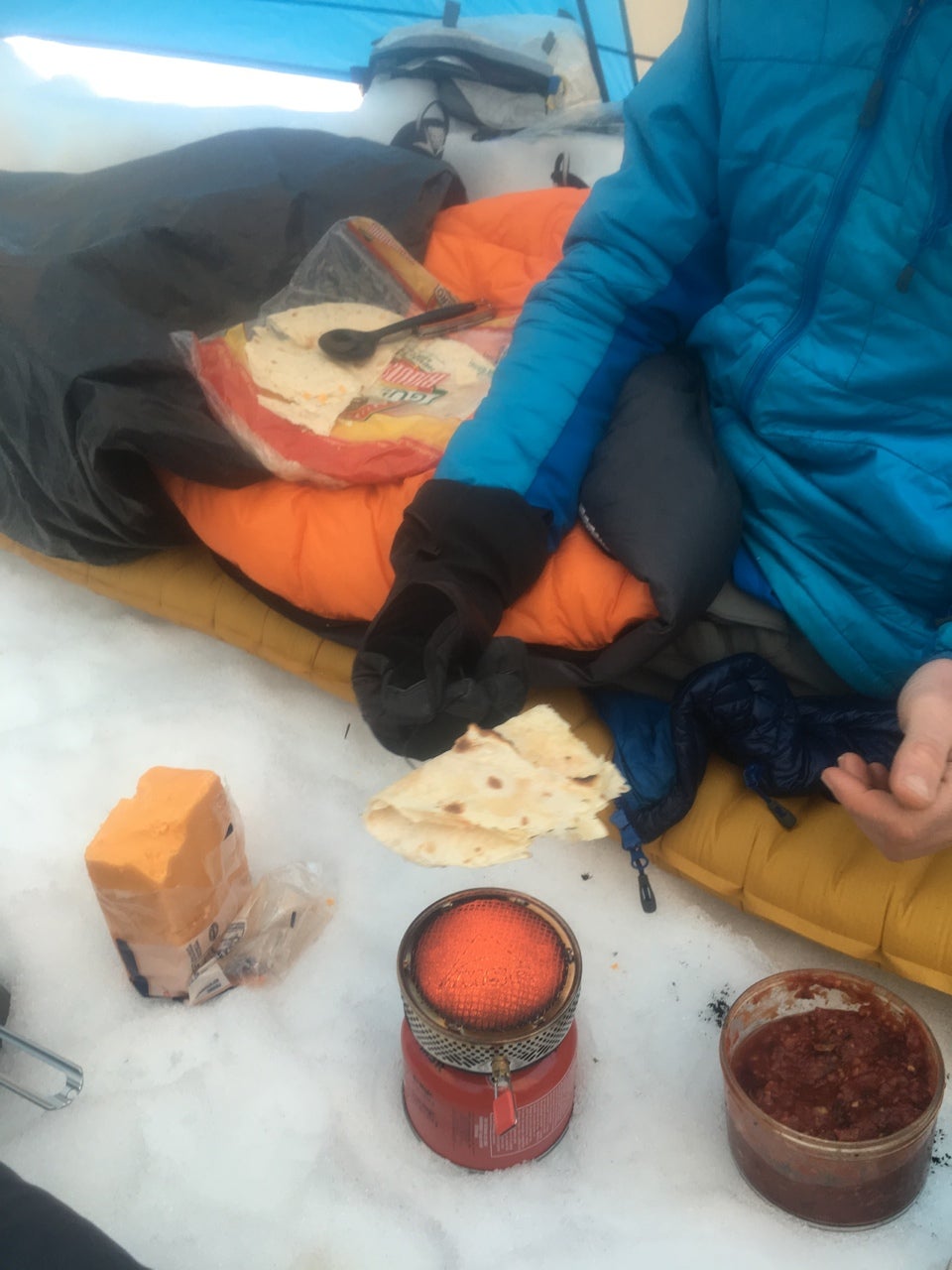 The biggest crux, when they almost bailed

"Our final resupply fell through at the last minute due to an error in the planning phase—a lesson we are still digesting—and we spent six hours in discussion of our options. We had just skied off the summit of Whatcom Peak that morning, and were hunkered down in the river valley below, contemplating the unfamiliar country north of Whatcom Pass. We’d planned four days to reach the border–with almost no food. It really looked like we might just walk out and hitchhike to Glacier; we talked about getting a room and having a celebratory evening at the edge of civilization. It was a really hard, sad conversation. I didn’t want to leave the mountains; neither of us did." —Forest

A wife and a mentor save the day

"The solution surprised and humbled us. We called Trevor’s wife Emily and she stepped up to find us a last-minute resupply. At 9 p.m., Martin Volken volunteered to hike some food in over Hannegan Pass to Boundary Camp. He left North Bend at something like 3am the next morning, hiked a big sack of food into the wilderness, and hiked back out. Martin has done so much for us as a friend and mentor, and it was very moving to us that he wanted to help." —Forest 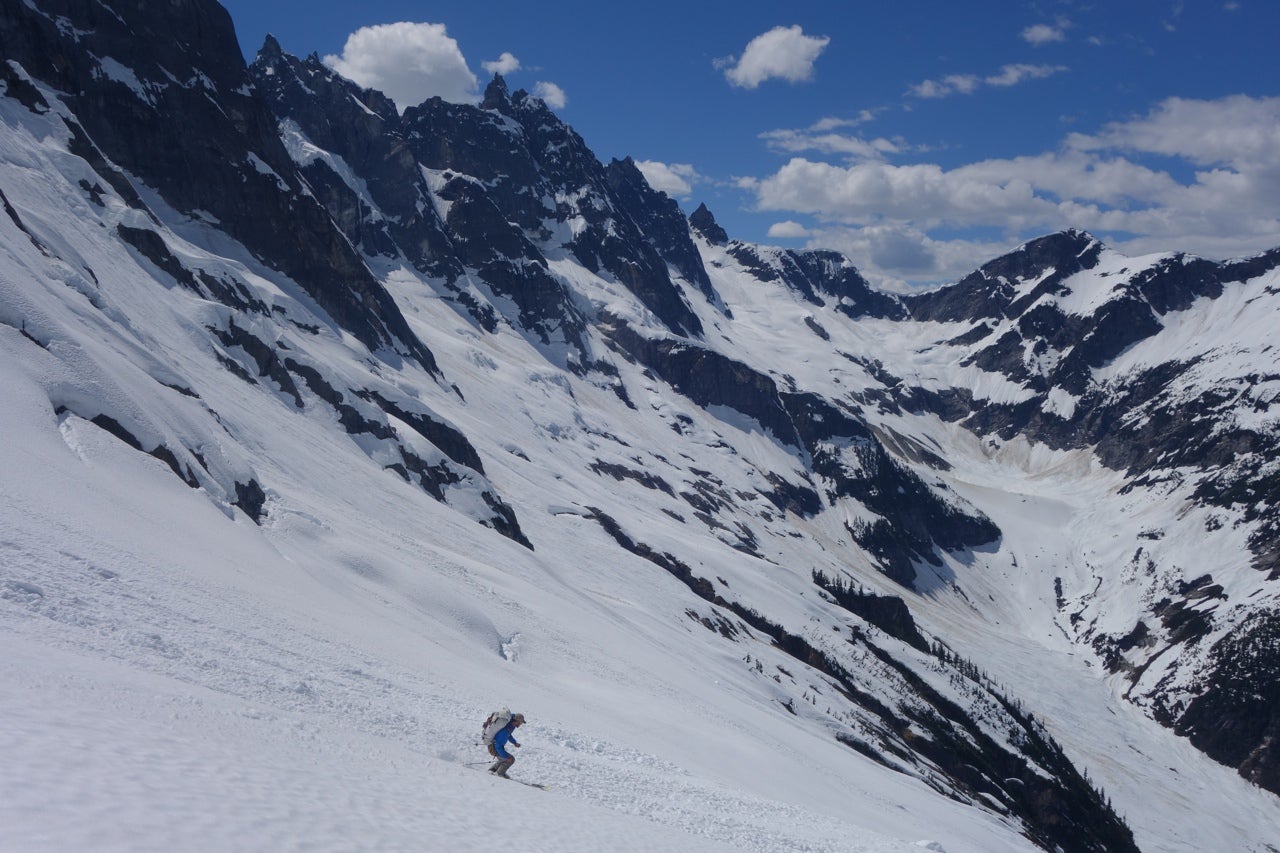 Skiing corn near the "pole of remoteness"

"We skinned to the summit of Mt. Fury on a crystal-clear day as the sun rose; a Townsend’s solitaire sang to us from the wildly tiger striped schist cliffs beside the southeast glacier. I’d walked and skied past Mt. Fury several times, always without enough time or energy to make the trip to its summit. Mt. Fury sits near the “Pole of Remoteness,” what some people deem to be the most remote point in the lower 48. It’s way deep in the most rugged subrange of the North Cascades, the Pickets. Few people spend less than five days getting in to Fury, climbing it, and getting out. We ripped our skins, sent some texts via cell phone(!), and skied brilliant corn down the headwall. We aired the bergschrund, laughing hard the whole time at our incredible luck and our abundant joy." —Forest 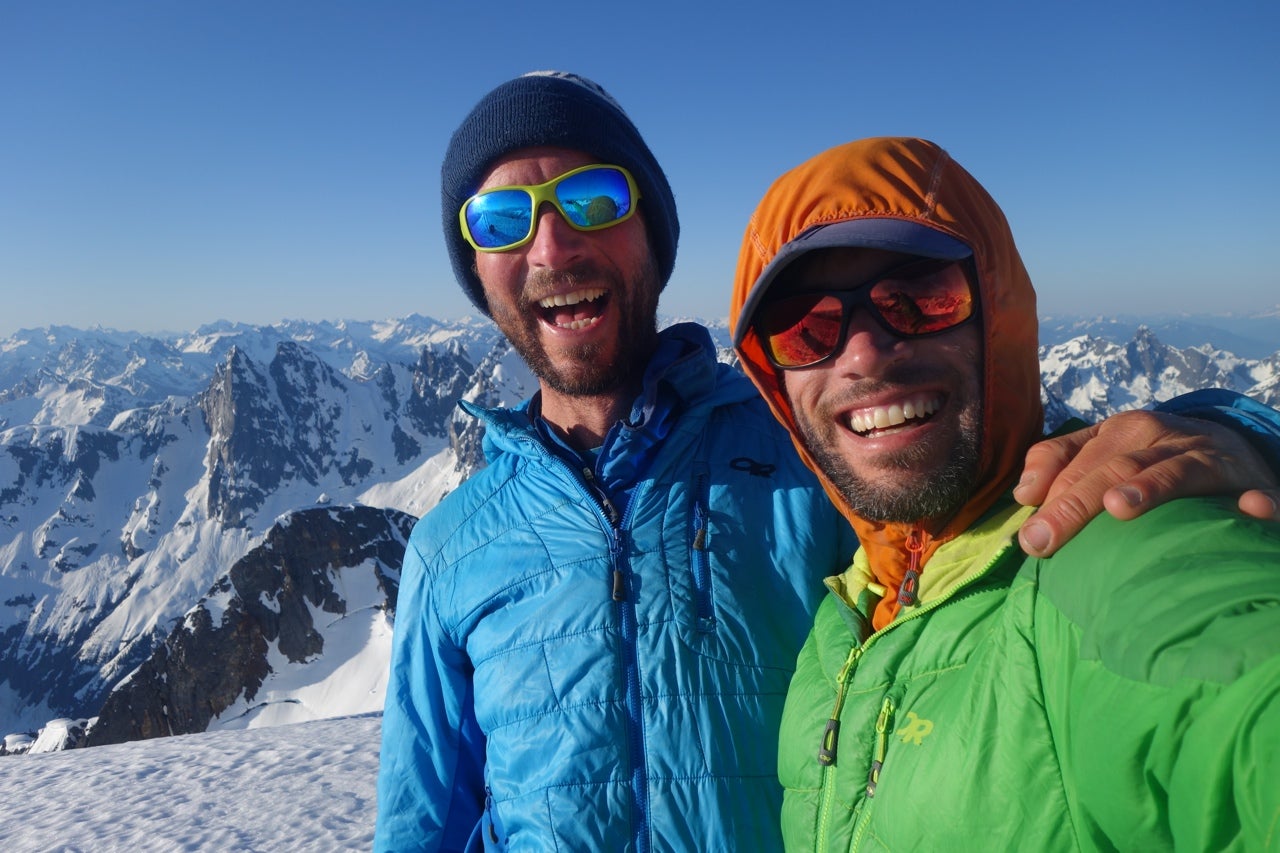 How it all started

"Trevor and I probably started talking about this idea soon after we became neighbors in North Bend in about 2011. Our first conversation was all about ski touring, naturally, and many more followed, as we became friends and colleagues over the ensuing years.

I would say the mountains themselves inspired this trip—if you are into ski traverses, then the crest of the Cascade range is an obvious and natural line. While researching a guidebook to Washington State ski tours with Martin Volken and Pro Guiding Service, we grew our sense of what was out there.

Dan Nordstrom actually flew a group of us around the North Cascades, and I got to see the route from above. Lowell Skoog’s multi-decade project to ski a crest route in sections was also an inspiration. We started to get serious about making it happen about four years ago; we planned out the route and logistics with Erin Smart, and hoped to do it in 2015. That was an awful winter; 2016 didn’t work because we were all stuck with obligations." —Forest 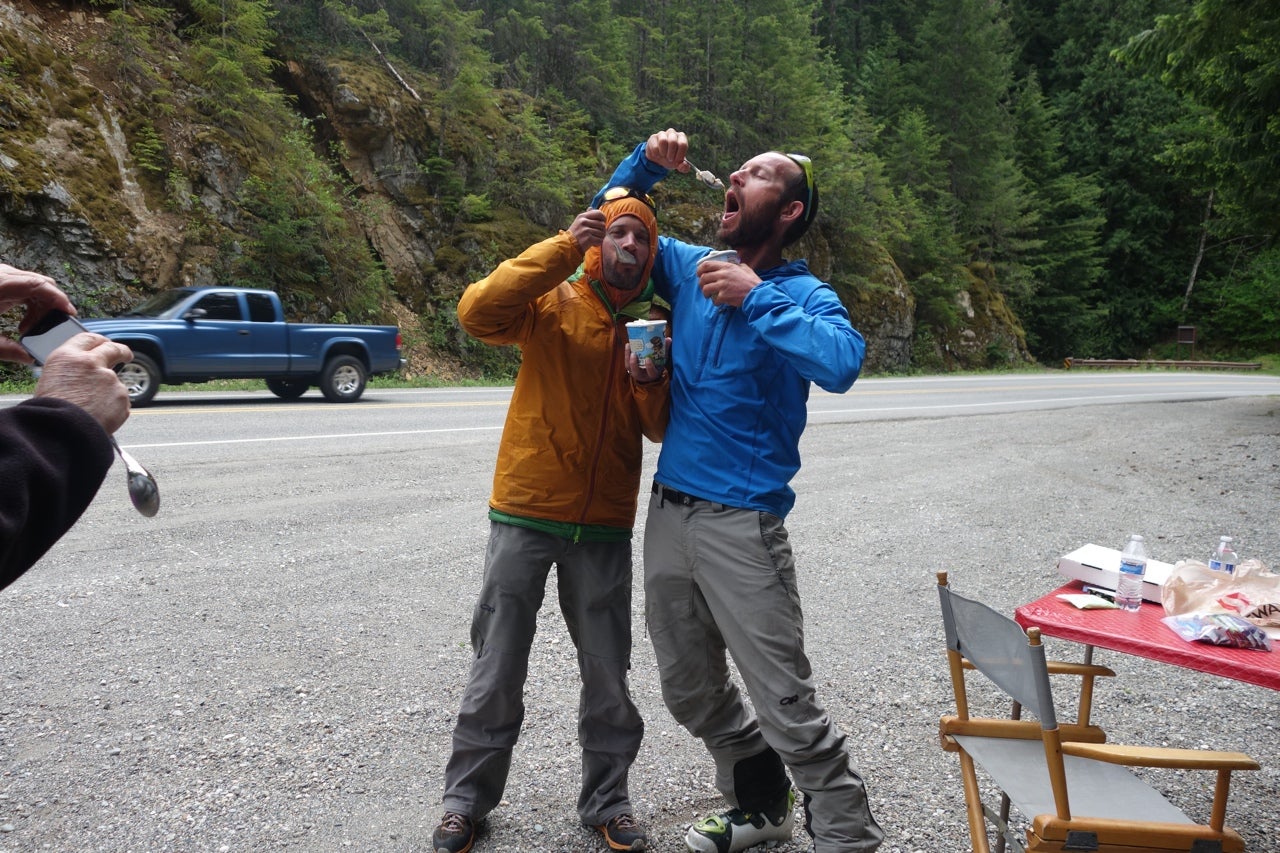 "It's easy to dream, but harder to share and execute. As we shared our adventurous vision with loved ones, the more support and encouragement we received, making the execution that much easier. As family and friends, we want to help each other live to the fullest and we are advising all to share their passionate dreams more frequently."