Into The Khumbu: Ama Dablam 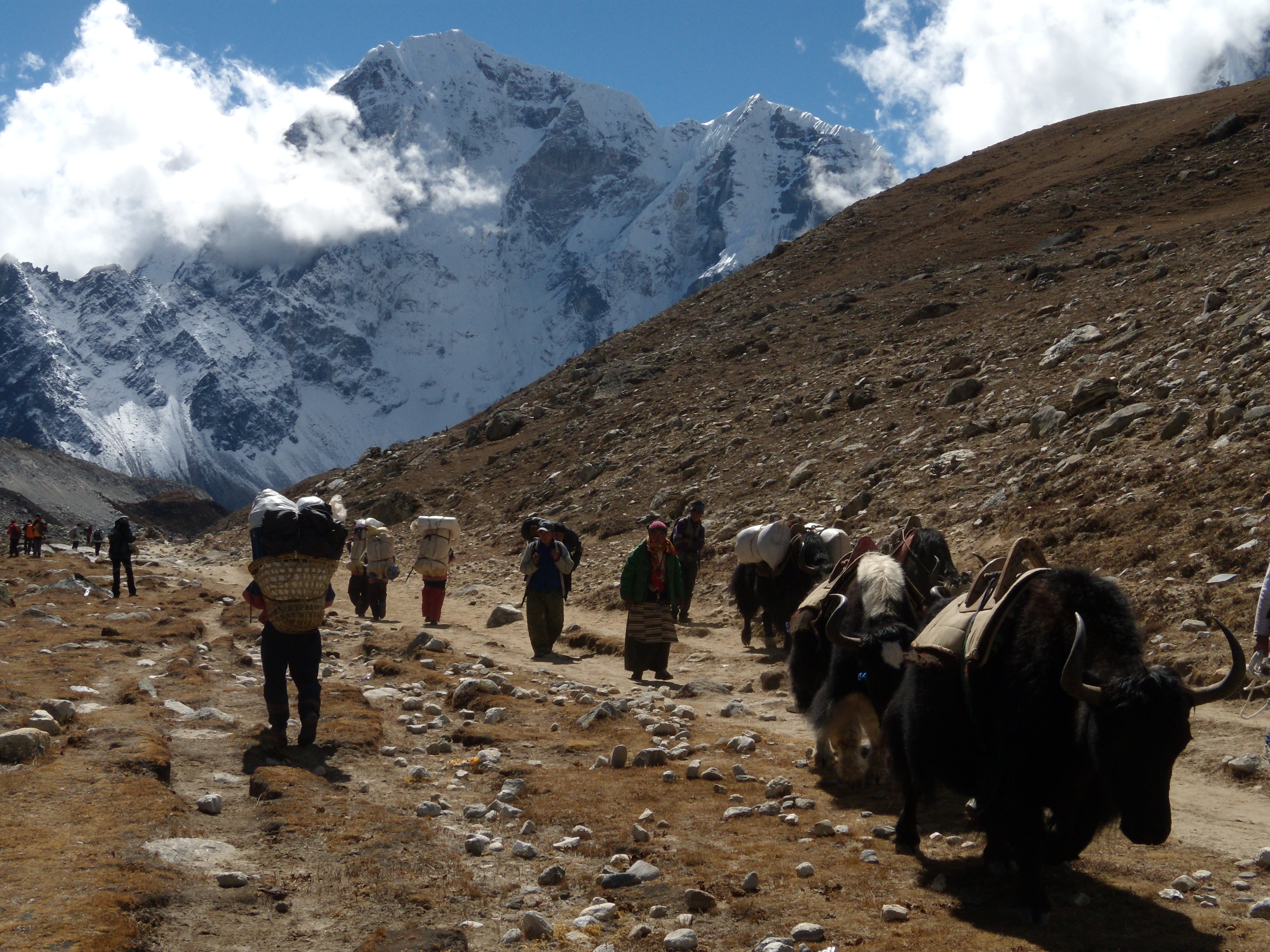 21,000ft and moving too fast. It has been three years since I have been exposed to the altitude of the Himalaya and the feelings are all coming back to me. Getting to easier climbing terrain for the first time this morning, my legs move swiftly while my lungs work to pull O2 from the atmosphere. Mushroom Ridge falls away into thousands of feet of air rolling to the barren valley that was carved by massive glacier systems of Ama Dablam. My emotions are full, pulling from the thin air. We shed thoughts of the season’s recent deaths that have surrounded us these past weeks; friend and Washington Alpinist Joe Puryear died the day we summited Lobuche East, 19-time Everest summiter Chhewang Nima Sherpa was killed the week before while attempting Barunste with a fellow Western guide and the helicopter that buzzed us on the Southwest Ridge of suddenly crashed around the corner on the North Ridge during an attempted rescue, killing the crew. But none of this was on our mind. In this moment, we climbed towards our goal without distraction and in perfect weather. We were going for the summit of Ama Dablam and we felt very alive.

Peaks with once-unpronounceable names outline surrounding crests making up the now-familiar surroundings in the Himalaya. Long lateral moraines run to the tops of the valley gorges reminding us of the size of historical glacial ice that once choked the Khumbu valley hundreds of years ago. High basin Sherpa villages made entirely out of stone homes dot green terraces on the flanks of the lower valley. Standing independent at 6814m (22350ft), Ama Dablam, the “Mother’s Necklace” in Sherpa language, is named for her obvious maternal outstretched “arms” of the Southwest and Northwest ridges and the hanging ice serac “pendant” positioned below the head wall.

Below the peak the 15,000ft base camp sits in a large meadow the local people call “Ramro Taone”, hosting a collection of expeditions each with a variety of tents and domes decorated with prayer flags. The massive west face of Ama Dablam hangs above the camp allowing perspective of the mountain’s entirety as expedition efforts unfold. The Mother’s necklace hangs noticeably smaller since the 2008 ice avalanche when the “Deblam” serac reduced itself by 25% and released hundreds of tons of ice before the season started. The event excavated most of the terrace that expeditions previously used for camp 3. It was a close reminder of the 2006 tragedy when five Sherpa and one British climber were swept down the west face while sleeping at 21000ft at Camp 3 in a similar event. Now we use a narrow, airy ridge camp 500ft below on the Mushroom coined “2.7” and sleep soundly. This year the Mother had a different surprise for the season, a face-lift for 2010.

Upon our team’s arrival to Base camp, our lead climbing Sherpa, Ang Passang, pointed out a new serac near the summit. A strange new line running the top of the entire face captured light like a reflector. It’s a familiar-looking line – the line of an avalanche crown. I realized then that the 1- to 3-meter escarpment is the remnant evidence of a massive climax avalanche that ripped the entire upper head wall off the mountain. This mega-slab avalanche stripped the snow pack exposing thousands of feet of bare glacial ice. This was something none of the guides or Sherpas had ever witnessed before. The slide was the result of the upper mountain receiving a heavy amount of snow this post monsoon season. This weather cycle complicated several climbing expeditions and resulted in multiple avalanche incidents involving climbers and climbing Sherpas. I commented to Ang Passang about the football field of snow on the 55degree slope above the crown that did not release.

Our first few days are spent getting in position on the mountain and improving our acclimatization. We work our way up to the route on the lower flanks of the mountain, carrying a single load up to Camp 1. We have to sleep one night high at 18800ft and rest low before we go for the summit push. This night can be hard. Your body reacts to the altitude by dumping the waste products and causing you to urinate hourly. Pounding headaches at altitude wake you up. Our morale is directly attached to our ability to deal with these discomforts. Being closer to the mountain, the line completely unfolds revealing cruxes and building anticipation of the climbing. Your imagination climbs higher, experiencing the mountain and seeing positions of exposure. Only descending will build up our blood for the thin air and give us strength. We return to the Base and rest.

I arrange to get a forecast from a weather model via satellite and it indicates a 4-day window followed by a low pressure system with all the elements of foul weather at every elevation. The graphic on the screen even looks like a large mouth engulfing the data representing good weather. The timing complicates our current strategy. The storm was coming in the night of our planned summit day. This would provide no room for error on the upper mountain.  We had to give up a rest day at Camp 1 in order to give us a least a 24-hour buffer from the storm. This means four hard days in a row with little recovery. 15,000ft to 22,580ft and back in four days on a long technical granite rock ridge of gendarmes, a gantlet of moderate mixed climbing, the exposed Mushroom ridge, and final upper Dablam Head Wall of alpine ice to summit. Ama climbs like an alpine fun park that requires execution from all of the mediums found in the alpine.

We launch out of base camp for the summit with mixed expectations for the outcome of the team. For some, this will be their first time to such altitude, others in such cold, or with such technical climbing. From Camp 1, we climb in a single carry to advance our position. This climb is an ascension of conditions; we start on rock, transitioning to mixed snow and rock climbing finally reaching camp at 2.7 on the Mushroom Ridge. Early on the pack feels heavy. The group traverses the exposed rock ridge and the valley drops away. Clipping into fixed ropes between piton anchors we ferry across exposed faces. It is like an obstacle course in an extreme alpine environment. Traverse, clip, climb, jug, up, across, and down then over and through as we travel thousands of feet of fixed line in complex terrain. My mind contemplates the next problem, searching to find a technical solution. Trying to get to the next camp is like trying to solve physical math problems all day while exposed to steep mixed alpine terrain with a pack at altitude.

Getting to camp 2.7 was not looking good. At the group’s rate, we are not going to make it. We have to stay at Camp 2 lower on the mountain forcing us to go for the summit from this lower camp. Summiting from Camp 2 has become a common strategy for several years since the Dablam avalanche killed the six climbers at Camp 3. Camp 2 was not a terrible position to end the day.

Now this was it, our only shot. Summiting was the completion of our expedition and what provided the trip with ultimate value. The guides and the climbing Sherpas set up a strategy for the day. It was decided that Ang Passang and I be the guides that bring the participants down that need to turn. Panuru Sherpa and IMG guide Max Bunce will now have a shot at summiting for the first time. This is common practice in the industry but not a hard rule. It’s difficult to give up a summit like Ama’s. I worked hard and dedicated energy. It becomes a gift of opportunity you give someone and it feels good to do so. It’s good to be back on the upper mountain. But when I get the expected radio call that a client is turning around, I am deflated. Looking up at the Dablam, I’m close enough to see the season’s ephemeral lines that form on the glacial ice and the icicles that drip on the edges. I greet my client for the decent watching the upper teams begin to pull away. I turn and look into Tibet as we begin our descent. Now I can think of Puryear. I turn to look down the mountain committing to my job as the overseerer of this climb. Today I am a steward of the mountain. I wrap my arm in the fixed line to descend as the summit floats away back over my shoulder. This is my work but it feels more like a lifestyle. I dream of the next time I’m in the alpine of the Himal. I have no regrets just new memories and experiences to make my return richer. I promise it will be.

Our team of IMG Guides and Sherpas enabled two participants to achieve the summit at 1:15pm on Nov 8th this year. It was a 17hour effort from C-2 totaling 110hours round-trip on the mountain after leaving Base Camp for the last time. Twenty-one percent of all that attempted this mountain this year have reached the summit. The storm came as forecasted.