Jungle-Style Fishing On The Bolivia-Brasil Border 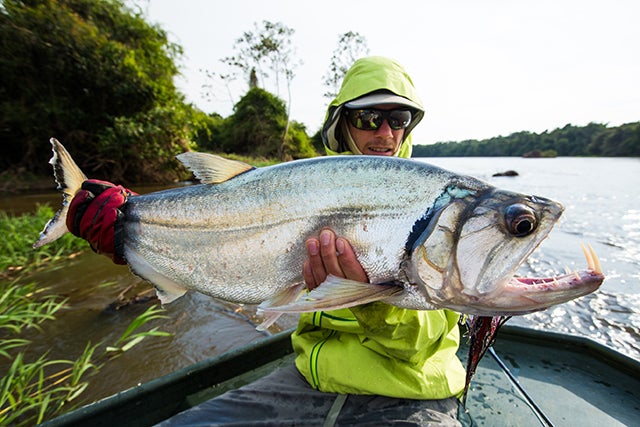 The concrete jungle of Santa Cruz, our temporary home, was a world away from the distant Tsimané territory where, only 24 hours before, the greatest fishing experience of our lives came to a close. Navigating the inner rings of the city, in and out of the maze of markets with our new friend Tiko, we dodged the erratic drivers and street meats while embracing the relentless culture shock. Two days go by in the city, and I can’t stop thinking about getting back into the real jungle somehow. Even as the idea of climbing into the mountains lingered, we still had time, and I wanted more.

Our friend Patrick sat across the table from us as we ate dinner one night, nursing a severely broken leg that he’d suffered on an exploratory trip in the jungle only weeks before we’d arrived. What a gentleman—even though he couldn’t go with us, he made sure we got our golden dorado, put us up at his house, and anxiously awaited our return with the stories and images we came for. Sensing that Neil and I were not quite ready to give up on fishing, he mentioned a place called Caño Negro along the San Simón River near the Bolivian-Brazilian border. He talked about the beautiful Green Forest Lodge, in the midde of the jungle, 10 days by boat or three hours by air, with freshwater sport-fishing opportunities not found anywhere else on the planet.

Coming down to Bolivia, we had no idea this place existed or even imagined we’d be indulging in the fishing lodge life. Then again, I never guessed we’d ever even go to Bolivia, let alone connect with the best person we possibly could have. Patrick was good friends with the owner of Caño Negro, as our luck would have it, and before our wading boots had time to dry, he’d arranged for us to spend a week at this fishing paradise. Back in a little bush plane for another three-hour flight, but instead of the cold, mountainous rivers of the golden dorado and expedition-style camping, we were heading toward lowland Amazonia for a completely different experience.

The lush accommodations of Caño Negro stand alone in the heart of a 4.5-million-acre nature preserve, along the banks of a sprawling network of spring-fed lagoons, the vastness of which could be fully appreciated during our flight. We were greeted at the private airstrip by the lodge manager Jaime and other members of the staff, and through our broken Spanish we enjoyed a warm welcome. This place is a relatively unknown destination in the fly-fishing world, but with the insanely diverse selection of over 29 species of freshwater game fish, 10 of which we caught on the fly during our stay, I wondered how it could have remained a secret. We walked past a sign that read “welcome to fishing paradise” on our way to a thatched-roof bungalow where an afternoon siesta was in order.

Within hours of landing, Neil and I were casting our flies into the dark corners of the Rio Caño lagoons with our guide Jesus, and hooking up on peacock bass every time the fly hit the water. It was the kind of interminable action every angler dreams of. We thought about how our Pop, who at times struggles to catch the finicky trout of our home waters, would have a hard time keeping the fish off his line at this place.

After a few hours of catching peacock bass and piranha, we motored our way back to the lodge as the last rays of sun retreated through the canopy and we began to settle into our new routine: catch fish all day, eat delicious food, and rest. Even though we’ll always be passionate “do it yourselfers” and love the thrill of being on our own, this was nice—REALLY nice. We could get used to this.

Everyday started with a quick stop in the dining room for a delicious breakfast, and before the sun returned again through the branches of the sub-tropical forest we were on the water. All we had to do was mention to our guides the name of a species of fish we wanted to catch, and they would take us to the most prime locations where the fish could be found. Most mornings were spent targeting the payara, known as the “vampire fish” or the “saber-tooth river tiger” of South America. A prehistoric looking thing with two massive mandibular incisors and a savage appetite for other fish, it is a true river monster. Luckily, the flies we brought for the golden dorado would be effective for these equally aggressive payara. One thing we did not account for, though, was the rate at which the piranha, which inhabit every inch of water, would ravage our flies down to the bare hook. I can’t count how many times I casted a brand new seven-dollar fly into the water only to have a pesky piranha take off eight inches of fiber in one bite. While I was excited to catch a piranha in the Amazon, the novelty wore off quick.

When the sun was high in the sky, an extremely predatory species of catfish known as the surubí became active on the sandy flats of the San Simón River. We spent hours sight fishing to these monstrous cats who sat on the bottoms of the shallow oxbow bends, ready to ambush anything that swam within distance. Only if the fly presentation was perfect would one of these shark-like fish go in for the final strike. Once hooked, the fish would scream across the flats searching for deeper water. On one occasion, Neil had a surubí on the line and a large black caiman, which infest these waters, had taken notice. Our guides grew tense, and warned us to keep an eye on him as he slipped beneath the surface of the water. These crocodilians were notorious for snatching fish off your line, but of even more concern as we stood knee deep in the murky water was getting a leg snatched off, or worse.

After five days of fishing at Caño Negro, casting big flies and catching fish from sunup to sundown, my right arm felt like it was going to fall off. My Outdoor Research Buzz-Off clothing constantly drenched in sweat from the dank jungle and physicality of the fishing and my hands covered in hundreds of no-see-um bites were signs that we had put in our time here. We were flying away from this fishing paradise feeling enlightened, having discovered a whole new world of fishing potential. Even though the flight back to Santa Cruz was one of the bumpiest, scariest experiences of my life, I could not help but think about how far our passion for fly fishing has taken us, how lucky we were to explore Bolivia and fish for an Amazonian grand slam of such tremendous variety. Our golden dorado expedition and stay at the Green Forest Lodge took up more time than we’d planned, and we only had one week left to get into the mountains to achieve another goal for the trip: reaching the source of the Amazon with our skis. But after spending three weeks down in the jungle at around 500 feet above sea level, the oxygen-deprived air that greeted us at 12,000’ in La Paz was a clear indicator that the third and final part of our adventure would be the hardest yet.