Kyrgyzstan to Pakistan: Solace By Cycle 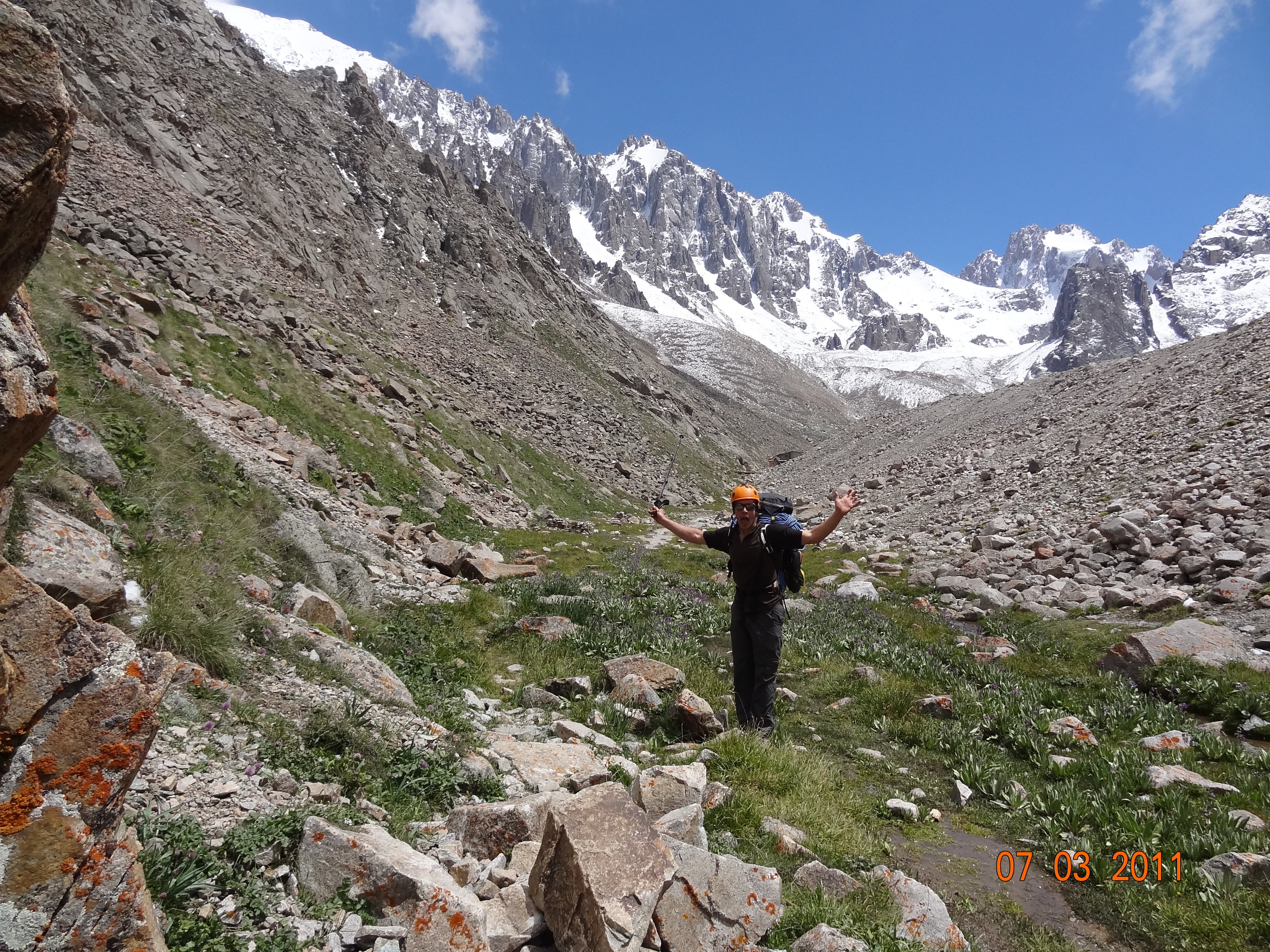 Equanimity is typically not the emotion experienced during the planning and execution of a several month journey through Kyrgyzstan, China, and Pakistan. But during the spring of 2011 it was the sentiment that I desired most.

I got the phone call that Garrett had died in an avalanche at 5am on March 27th. Only a few days prior, my good friend Mitch unexpectedly put a gun to his head and killed himself. The spring of 2011 hit an all time depressing low when my girlfriend, Jewell Lund, fell nearly a thousand feet down a narrow couloir on the northwest face of the Pfeifferhorn. She and a friend were trying to ski the extremely steep vein of snow when Jewell slipped on ice and rag-dolled over two cliff bands. Her helmet saved her life but a severe concussion and her broken radius-ulna inhibited her from joining me on our summer adventure of bike touring and climbing through Asia.

I even doubted the appropriateness of going on the multi-month adventure. Work at the coffee shop I co-own in Salt Lake City was at an all time high. I felt more comfortable paying bills, managing employees, fixing broken appliances, doing building remodels, and making mochas than I did climbing on stone and ice. Even hiking through the mountains felt unfamiliar. On days I was able to make it out into the Wasatch mountains I felt displaced, my mind often focusing on my business or the recent events of friends and loved ones. Life felt chaotic. While on a hike one spring day, I tripped over a small rock and fell to my knees. Nature feels so foreign to my soul. My life needs to slow down. I must go to Asia, I thought.

The plan, at least on paper, seemed simple. Assemble my bicycle and trailer at the Manas airport in Bishkek Kyrgyzstan. Spend the next six weeks, solo and self sufficient, riding around the country exploring and climbing mountains and rock faces that inspired me. Then, ride through western China crossing over the Khunjerab pass at 15,397ft, into Pakistan and meet up with Coloradans Kelly Cordes and Hayden Kennedy. And finally, spend another six weeks climbing on the Charakusa glacier attempting some of the mighty peaks of the Karakoram. My psych for the adventure was palpable, my fears and hesitations were hidden and piled under a heavy blanket of intense stress.

During the first 10 days of the journey I pedaled hard. I woke up early. I ate lunch with one hand and steered my bike with the other. Often times I rode well into the evening. Kyrgyzstan was flying past me; I was physically there but didn’t see it. I had places to go, people to see, or at least so I thought. Pedal harder. Charge! I parked and locked my bike at the end of the road in Ala-Archa national park. In a heavy rain I packed my backpack and hiked for two days to Ratsek refuge at the base of the steep and icy Peak Free Korea (15,551ft). I had goals, and one of them was to climb the 1976 Barber route. Then things went wrong, as they had so often this year, and I got sick. But sickness didn’t matter; I had to experience ALL of Kyrgyzstan. I repacked my trailer, loaded up my panniers, and took off on a 430kl ride to Karakol.

The most important lesson I learned those first couple weeks in Kyrgyzstan, and quite possibly the essential education from my summer, was how to slow down. I thank the bike for that. ‘Round and ‘round the pedals went. Clouds over lake Issuk-Kul hovered in the immense sky, drowning in a vibrant orange and red late in the day. Thoughts drifted through my mind but I didn’t focus on any of them. There was time to think on that ride to Karakol but I just observed. Time away from a chaotic life, alone and in nature, was slowing me down, curing me. I stopped more to chat with people, observed their lives, and took pictures of things that created wonder within. I felt deep breath returning to my soul.

After a shower and grocery resupply in Karakol, I began a long climb on the bike into the Tersky Alatau range. A peak there, Djigit (16,961ft), had sparked my interest when I found a photo of it on Google Earth some months before. When the road became impassible on bike I locked it to a tree and hiked two days to the base of Djigit. The mountain looked like a mini Swiss Eiger. Peak Djigit was amazing! From a pointy summit the mountain triangled downward and contained pockets of snow, steep quartzite outcroppings, and trickles of rotten looking ice. After my first day of rest in nearly three weeks, I went for it.

Hesitation and fear rose in my mind as I crossed the bergschrund early in the grey morning. Soloing is real, I reminded myself. A thousand feet of 60-70 degree ice and snow passed under me. The cyclic rhythm of kick-kick swing-swing dissolved all my apprehension. Several mixed rock steps sparked a deeper focus that being entirely alone complimented nicely. Another 500 feet and I stood on top of snowy peak Djigit. To the east the mighty Tien Shan mountains formed the border with China; they were my next destination, but would not be easy to get to.

Eight days out the Uch-Kul valley.  Climbing has been part of my life for long enough now that when fear rises within me, which it still does, I typically know how to manage and suppress the emotion. The Uch-Kul valley scared the shit out me! But, that said, I wasn’t climbing. Water has for a long time been a great fear for many climbers. We like to hold onto things, have control over ourselves and our surroundings, letting go and letting gravity take over means failure. Water activities, such as kayaking, are completely the opposite. One must flow with gravity, learn how to let go, and simply ride it out, or so I’ve been told.

I followed a very old soviet era mining road out to and through the Uch-Kul. At one time the dirt road had connected the two towns of Inylchek and Ak-Shirak. Both sites were abandoned after the collapse of the Soviet Union, and the nearly 10,000 people that lived between the two towns didn’t do much to clean up after themselves. Riding through the condemned and disintegrating town, past vacant apartment buildings, sagging and rusty cable lifts that once took miners to the sites high on the steep mountainside. There were once chugging smelters that now sat in silence. And at the edge of town a cemetery with collapsed dirt and rock head stones. Inylchek’s remoteness and void of life, a blatant reminder of humanity’s fragility, was a spooky indicator of the self-dependency that lay ahead.

It was greatly apparent from my first day on the ‘road’ that it had been many years since it was in use. Only two faint tire tracks remained under the bushy overgrowth and rocky surface. Flashfloods had wiped out many cross-sections of the road and required double, and sometimes triple carries of bicycle, trailer, and equipment. Sometimes the road disappeared completely and I chose my direction ahead based on the steepness of the canyon walls and a faint line that resembled the road much further in the distance.

Then there were the river crossings. Bridges had either been blown up or taken out by the river’s swell. I grew accustomed to approaching a side valley with the expectation that I would have to cross a river. I could usually spot the guts of a former bridge. Twisted remains of concrete and heavy steel rods protruding from the opposite riverbank usually produced a deep sigh and heavy amounts of uncertainty. I would then look for a calmer spot where I could possibly cross the often-swift moving water. I know it is not recommended to use a rope and an anchor to assist with river crossings but I saw it as the only way to get my bicycle, trailer, and 70lbs of equipment across. Twice I used my 60mx7mm rope. I’d build an anchor, typically with driftwood and heavy rocks, and pendulum-belayed myself across one side of the river. Then I’d build another anchor on the opposite side, pull the rope as tight as possible, then using a carabiner and sling I clipped my stuff to the rope and ferried loads one load at a time.

The crossings that scared me the most usually took several attempts to get across. Belly button high water pushed hard against my naked body and I pushed back equally hard. Then a boulder under my foot would roll, I’d loose my footing, and go for a frightening swim back to shore. After 4 failed attempts at one particular crossing I resorted to carrying bike and possessions nearly 2 miles up and around a steep and rocky hillside in order to reach a point where I could access the road again. Doubt about my abilities to make it up the Uch-Kul wavered along with the condition of the road. Some days I would travel only 1 or 2 miles. And the river crossings always terrified me. My satellite phone offered an escape, maybe, but I wasn’t ready to call just yet. I pushed on.

Alone with ibex, Marco Polo sheep, eagles, wolves, and bears I eventually crested the barren 12,342 ft Uch-Kul pass after eight days of fear and constant insecurity. The other side of the pass looked promising, at least more so than the side that I had just ascended, it looked like the other side was maybe in use a little more frequently, like people had driven to the top of the pass and avoided descending down into the Uch-Kul because they already knew what I had just experienced. I descended down the other side and quickly found what appeared to be a seldom-used dirt road that would take me into Ak-Shirak and further onto the military checkpoint and resupply point of Kara-Say. Kara-Say offered some comfort in the form of a few military folks, some warm shots of vodka, and a bed. However groceries were scarce and so I pushed on for another human-less four days until reaching the city of Naryn. For another three weeks afterwards I explored by bicycle and did some climbing in western Kyrgyzstan near to the border with China. Eventually crossing the border into China and making my way to Pakistan. My pace those weeks had slowed, I found a tempo with the universe that felt right, and I felt free.

Solace Something happens to the human soul after prolonged engagement with solitude, with the unknown, and faced with difficult challenges. The residue of more chaotic times eventually fades, much like the light just after a brilliant sunset. I noticed my shoulders hung more loosely from my chest after the Uch-Kul. I felt greater composure during my remaining three weeks on the bike and in the mountains of Kyrgyzstan. Life felt more flowing, it wasn’t that I had gained control over the chaos, it was that I just accepted it as it comes, like the sun’s light in the morning sky.