Learning To “Just Do It” 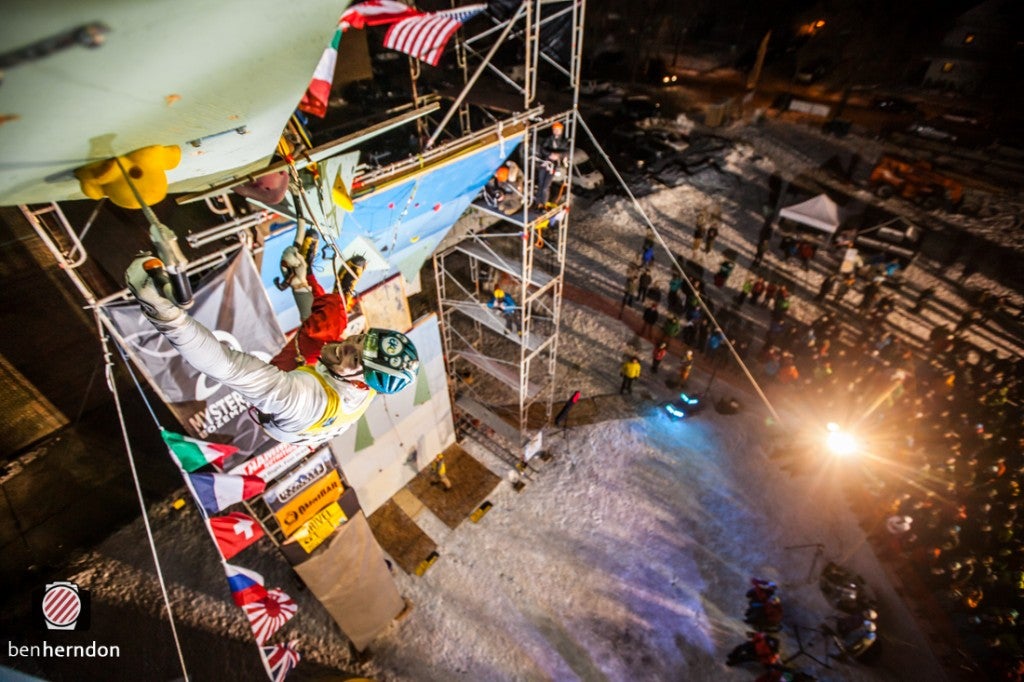 There’s nothing like the feeling when everything comes together, focus is honed, and you block out all distractions to perform at your very best. In fact, I recently read that fun can be described as “executing a well thought-out plan, things coming together.” And after two totally opposite experiences at my first two ice climbing competitions this season, I’m realizing it’s the state of focus and flow—“just doing it”—that’s more important than where I place.

I’ve been on a training plan that started in July. Part of the plan was to compete in several competitions before the world cups so I could sort through my plan of attack. The idea was to practice certain tools that I had learned, so when it came down to game time, I’d be an unstoppable force. Enter Korea. After four months of dedicated training, I found myself in Korea, preparing for the Korean National competition. This was a great opportunity to climb against talented athletes on a world cup-like structure.

In isolation, I was scared, nervous, feeling unprepared and out of place. I felt rushed and vulnerable, like I didn’t even want to be there. This mindset was all wrong: high stress and panic. My climbing was sub-standard after both qualifying routes. Before the finals, the judges asked me if I wanted to still climb in the finals. They said because I had traveled so far, it would be good to climb again. Although it felt like a pitty offer, I accepted the opportunity to climb on a finals route. In the end, if my score had of counted, I would have placed 7th. I climbed pretty well in the finals, but likely because the pressure was far less than if it would have actually counted.

In Korea, I had failed to put into action the things I’d learned. It was a rough start, but a phone call from home shook me even more: “Your brother has broken his back. My head was spinning.
But going home to Ontario did so much more for me than I could have expected. Seeing my younger brother battle through a broken back, witnessing his courageous efforts to not let the injury beat him was inspiring. Being at home offered me a lot of quiet time too, and time to be with my family and old friends. It calmed me, allowing me to think more clearly and see the simple facts: I was born for competition. And the results in Korea didn’t matter. Sure, things didn’t go as planned, but the entire trip was meant to sort out the “plan,” to see what worked and what didn’t work. That trip was to “create the plan.”

It’s so easy to get down on yourself when things don’t go according to plan. I get nervous, question things, lose focus, and fill my head with doubt. But you know what’s rad? I now believe in so much more than results. Last year, Will Gadd looked at me clearly in the eyes and told me that I was meant for this, meant for competition. For the last year, I’ve been working with a sports psychologist to unlock those very words. For years, I had struggled mentally. But now, something seems different.

I’ve learned that sometimes things don’t go as planned, but when faced with moments of choice, you must simply bend around the obstacle and stay the course. Change is inevitable. You either just have to go with it or alter to remain focused on the end result. When I say, “stay the course,” I mean stay focused on the goal—Just do it.

Obviously my goal is to be on the podium. But my plan has begun to change. I’m starting to see that my plan or goal is more about being in the moment, climbing my best. Flow state: moving without any mind. Not perfection, but aspiring to perfection. The result doesn’t really matter so much. But the feeling of knowing that you performed at your best in that moment, to me, is like winning.

Enter Bozeman Ice Climbing Festival, the North American Championships. The Bozeman Ice Festival is always such a rad time. There are so many amazing people, athletes from around the world, sponsors, organizers, volunteers. Everyone is psyched, everyone is encouraging, and everyone tries hard. You couldn’t ask for a better atmosphere. As far as competition, it’s the North American Championships—talk about electric. The talent meter was through the roof this year, and the crowd buzzed with every competitor trying their best.

My goal was to climb at my potential and ignore all the noise in my head. Unfortunately, I was sick, but I kept hearing, “Don’t let that be an excuse.” And those voices were right. My mindset was focused on one thing: Just do it.

Clip, clip, and clip. In the first qualifying round, I floated up the wall without hesitation, quickly clipping the chains. The second round again saw me clipping the chains in good form. There was controversy about whether or not I “matched tools” in time on the final hold, but that didn’t matter because it was still a solid climb and good enough for a spot in the finals.

Then came the four hours in isolation before the finals. It was long, tiring, loud and mentally straining. But it was different from my previous isolation experiences. This time my tools were in place, my distractions were organized. My mental state was stronger than ever, my mind was relaxed…and I was ready. The day before, I had spoken with my sports psychologist and he repeated: “Just do it.”  Those words rung through my head the entire time I sat in that chair in isolation, right up to tying in at the base of the competition wall.

As the crowd started cheering louder and louder, I could feel their energy jolting through my body. Hanging upside down, I found myself two moves away from the final hold. I was pumped. From the moment I left the ground, I climbed well, very well, up to this point: The moment of truth. Those words again were right in front me: “Just do it.” The crowd screamed louder. I clipped the final draw and moved my axe to the second-to-last hold, but I was stuck. My crampon was wrapped tightly around the rope. I couldn’t move—that was it.

Not making that last hold was the difference of a potential podium spot. I stood in fourth place. And I’m damn proud of that. Not winning, or even being on the podium didn’t upset or disappoint me. Yes, sure, I would have loved to nab a higher spot, but the goals I had set out—to climb to my potential, to climb without hesitation, to not think and just do—I accomplished all of them. So to me, it was like winning.

Looking back at the video of my performance, of course there were things I could have done better. There always will be. But when you have a moment like I did, surfing through the climb in the final round, sailing across that overhanging boom with the crowd cheering, your friends screaming encouragements, there’s nothing like it…with or without the podium spot.