Lessons From A Moose 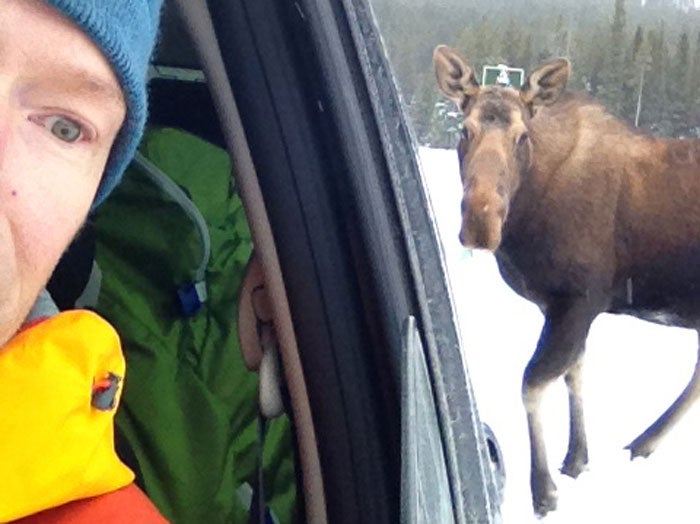 This story first appeared on the Calgary Herald.

Our family shares a love for the outdoors, and we often head out for ski and snowshoe tours, despite the usual complaints of being cold, tired and being forced to leave the laptop at home. The mountains matter to us, and it’s always worth the effort. But when we went out earlier this week for our annual holiday trip, we had an amazing moose encounter that taught the entire family some lessons.

We arrived at the trailhead in Kananaskis Country near the Black Prince Cirque turn-off and unpacked our gear, strapped on our snowshoes and loaded the packs. Then, my daughter Mackenzie, 15, yelled “Moose!” A curious moose was wandering nearby. After the initial excitement, we realized the moose was headed straight for us. OK, the first priority for my wife and I was making sure the kids were safe. Quickly stuffing two kids fully outfitted in snowshoes back into a car is entertaining, to say the least. I already had my ski touring gear laid out on the trail in preparation of clipping in, but the moose was closing in, so my wife and I just jumped into the car as well.

That’s when a second moose made its debut, moving in from the side. Soon they surrounded us, and they started licking the car. We could not drive away because we did not want to hurt them, nor did we want to leave our backcountry gear outside the car.

We made some noises to scare the moose away, to no avail. Then, out my window, I started snapping photos on my iPhone, and even managed a moose-human selfie (a melfie?). Between the noise of the electric window, the flash of the iPhone and the noises we made, the moose eventually moved far enough away that I could grab my gear and we drove away.

We moved a couple of kilometers away, thinking this would be fine to continue our ski and snowshoe tour. We spent the rest of the day up in the alpine basin snowshoeing and ski touring.But our moose adventure wasn’t over. Coming back down before nightfall, as we approached the car, my daughter again yelled “Moose!” This time, the moose stood between us and our car, standing proudly with a seeming smirk on his face. This time we had the kids stand behind a grove of big trees as we made noise and slowly moved closer as the moose stepped away. Hours passed, and I finally got to the car and was able to back it up toward the family so they could load up.

We’ve had moose encounters before, but never two moose twice in the same day at two different locations. The moose were never aggressive, and we did not want anything bad to happen to them.
On the drive home, our family came away with some life lessons learned from spending so much time with the moose.

• Stay close to those who matter most;
• Never give up in doing what matters most – the moose’s singular focus on food is the kind of focus we need to do meaningful things in our lives;
• Be relentless in what you want;
• Keep a positive attitude even when life hands you challenges;
• Collaborate with others. Together you can do great things and help others;
• And don’t forget: diversions can get you back to your car whenever you find yourself surrounded by moose.

Check out this adventure lover’s first book at mattmosteller.org.