Madaleine Sorkin: BTS On One Of The World's Toughest High-Elevation Routes 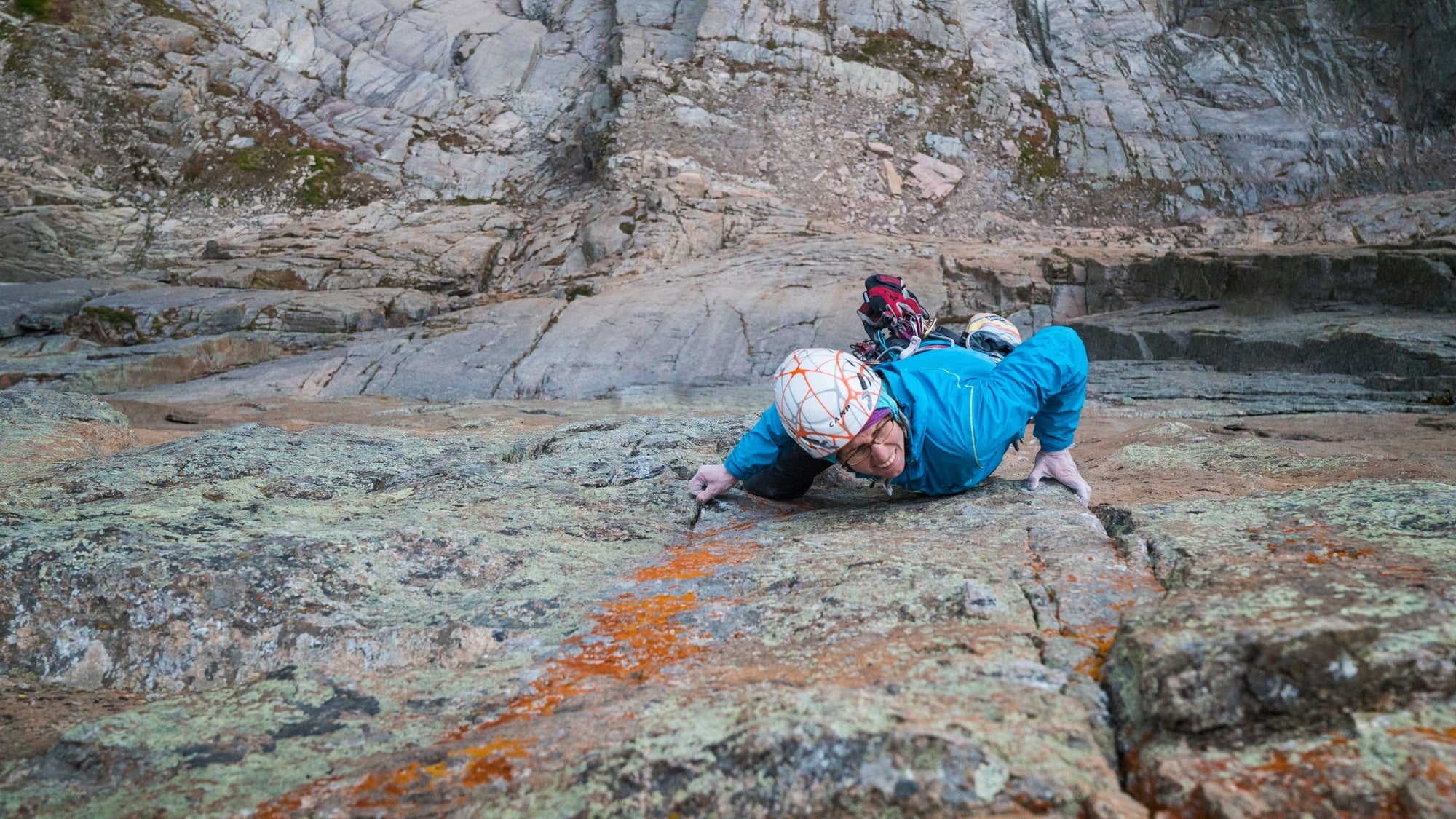 When Madaleine Sorkin completed a redpoint of The Honeymoon Is Over on the Diamond of Longs Peak last September, only four people had done so before her, and no other women. At 5.13c and 13,000 feet above sea level, the route packs a slew of alpine challenges into its nine pitches. We couldn't wait to hear more about it, so we asked Madaleine for the full story. Here's what she said. (More info on the route and its history can be found in the Alpinist article about the ascent.) 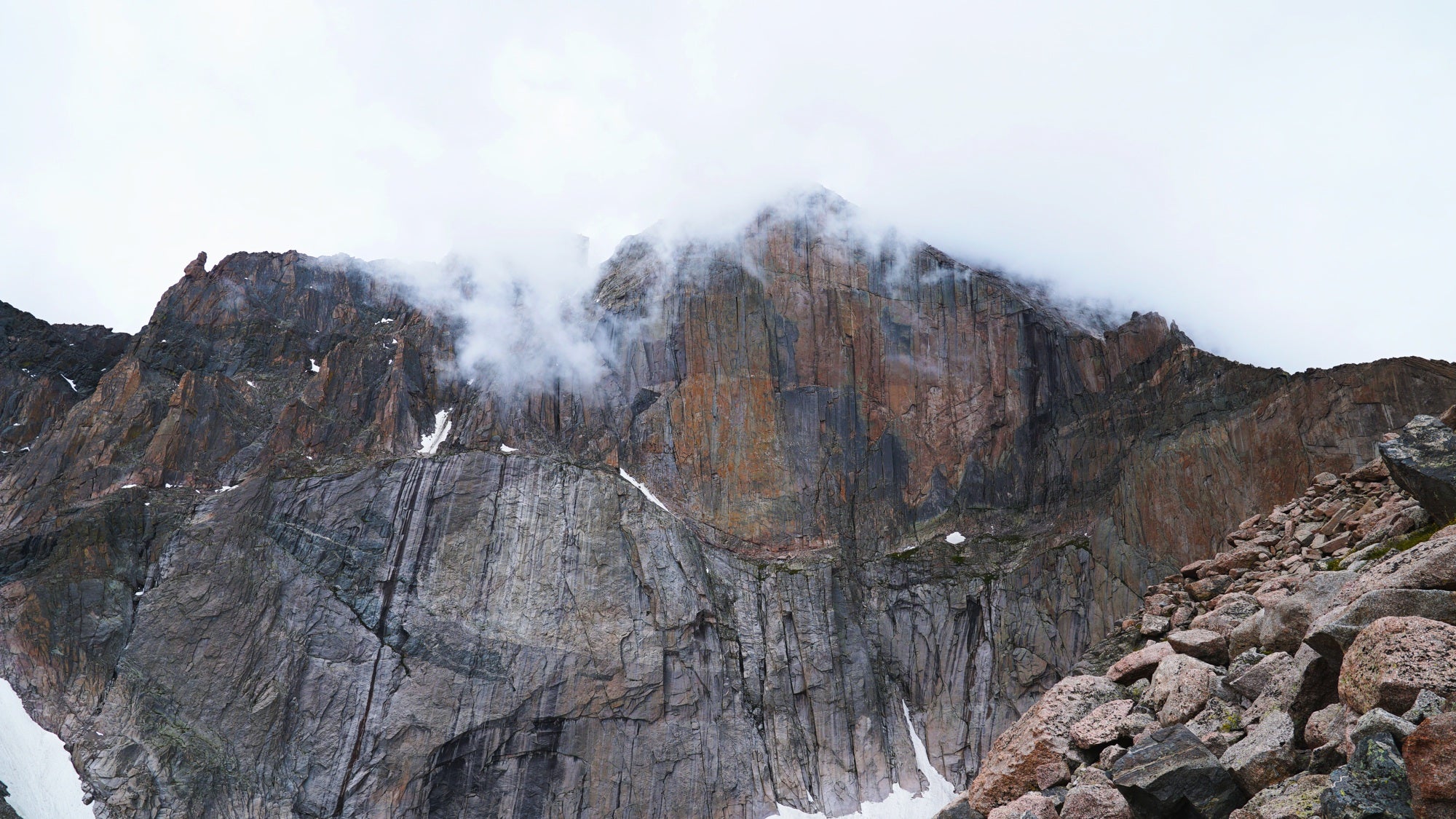 What about this route really appealed to you?
My obvious answer is that line goes right up the middle of the Diamond, one of the most beautiful big rock faces I’ve seen, and is sustained at a grade that is at the top of what I have climbed. But when I dig deeper into the draw of this challenge, I see more reasons that illuminate this goal as a next appropriate and desirable goal:

• Free climbing the route had the potential to be both out of reach and possible. Whether or not I’d complete this project within the generally two-month free climbing season of this route, was unknown, as well as what exactly the effort would require from me.
• There was enough known about the challenge for it to seem appropriate and cumulative—I’ve climbed a number of big routes at my limit before and spent time climbing in alpine environments. The friends who'd climbed this route were really encouraging and excited for me to try it and willing to give me beta and other support.
• The route’s proximity to home—the trailhead is an hour drive from my home— which provided a new and exciting opportunity for me to engage in a complex, longer-term climbing goal and then return home and reflect on the process in the company of friends and from the sense of place and stability that my home provides.  I felt cheered on my friends and local community here, which further supported me to give my best effort.
• Playing with my physical and mental edges in an alpine environment was really intimidating.  I am inspired by its beauty and aware of natures indifference to my well-being.  I think the partner and self-reliance these goals require can make us thrive and get in touch with reality in a way that promotes lasting gratitude for our lives. 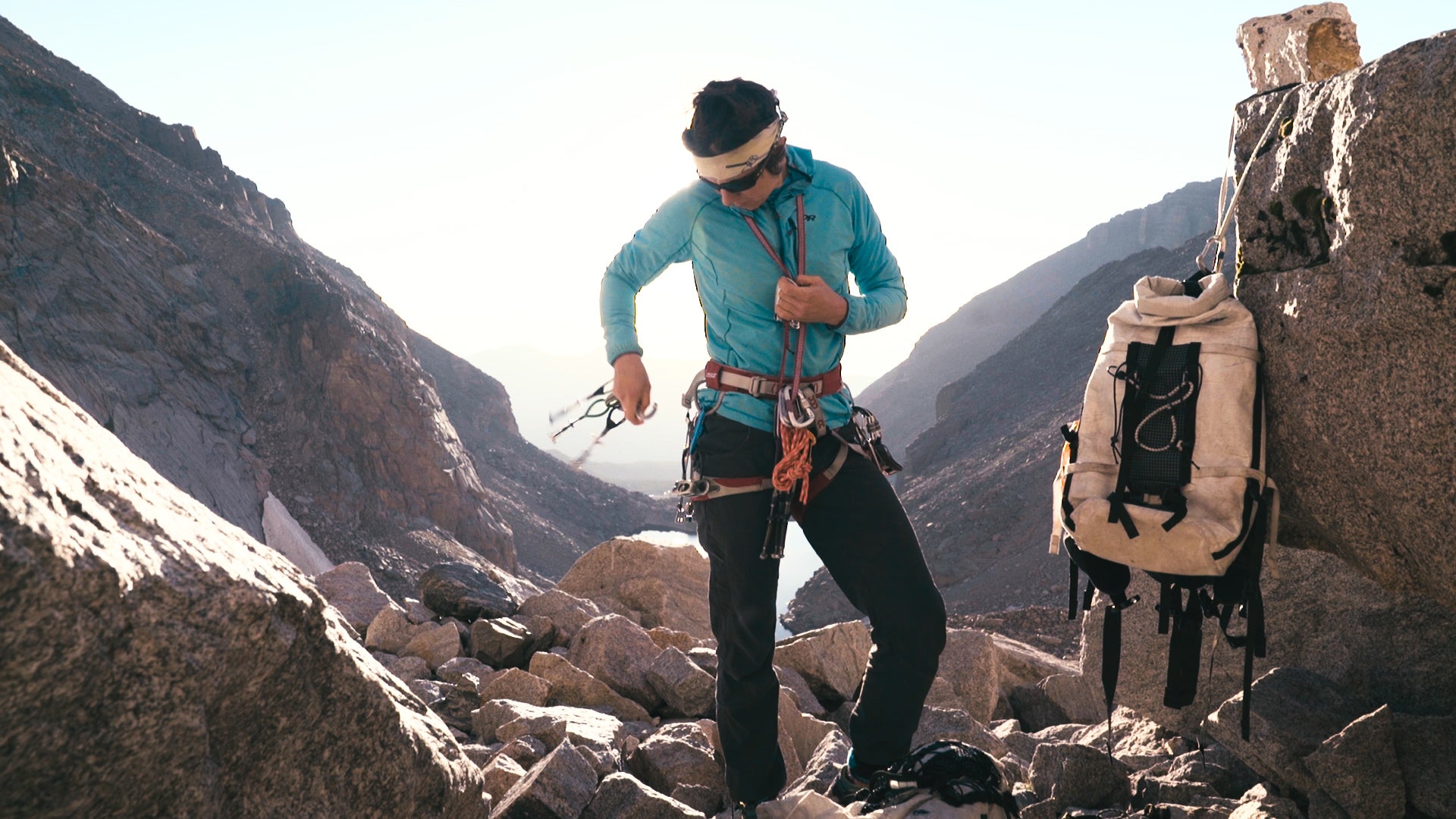 Aside from the (somewhat) unpredictable alpine weather, what were the biggest challenges?
I think once I realized that I could do the route the goal actually became the most challenging. There was the challenge of moving faster so that I didn’t get caught in a late afternoon storm and mainly there was the emotional and psychological challenge of such a sustained effort. As I waited and rested more than I am used to for the next weather window, I often found myself obsessing about the future. The potential variables would feel really stressful at times. My mind particularly tended to preoccupy itself with external variables that might be stressful—such as a partner bailing the day before, or the forecast changing or getting caught in a storm or wet conditions on the route. I’d watch myself checking the weather constantly or over-controlling other parts of my daily life. My mind would also preoccupy about my performance, however, if I checked in with myself and felt into my anxiety with curiosity I usually felt okay and I actually found I had a lot of trust in my ability to perform on the route. The challenging psychological edge that I kept meeting was largely an internal process— letting myself exist in the unknown of whether or not I’d complete the route in the style that I wished to instead of constantly reacting to this unknown with distracting preoccupations. Throughout the goal, I learned a lot about my continuing attachment to being successful and not failing and how challenged I can be by simply feeling not okay or like a failure. While failure seemed to be an okay option at the beginning of the process, as I became more attached that option no longer felt okay. The opportunity in a longer term goal is always getting to face these patterns of my mind through various episodes and ideally undo this false belief.

On August 22, I nearly sent the route (leading three out of the four hardest pitches) however I climbed the route slowly and a significant snow storm came through late in the day, soaking and freezing the route and I couldn’t climb the final hard pitch. At first I was disappointed but happy with my effort. With September coming, the temperature was dropping more and more and we saw a stormy cycle of weather for the next two weeks. I really wanted to complete the route closer to the style I knew I was capable of, however, I became less certain that I could perform in the cooling temps (shady 40 F), the wetter rock conditions, and before Sept. 8 when I had to leave town. My final effort was on September 7—down to the last wire with an upbeat and supportive friend whom I'd never actually climbed with before and who had never been on a route like this before. All of that was incredibly stressful and required me to act more light-hearted than I knew I was capable of. 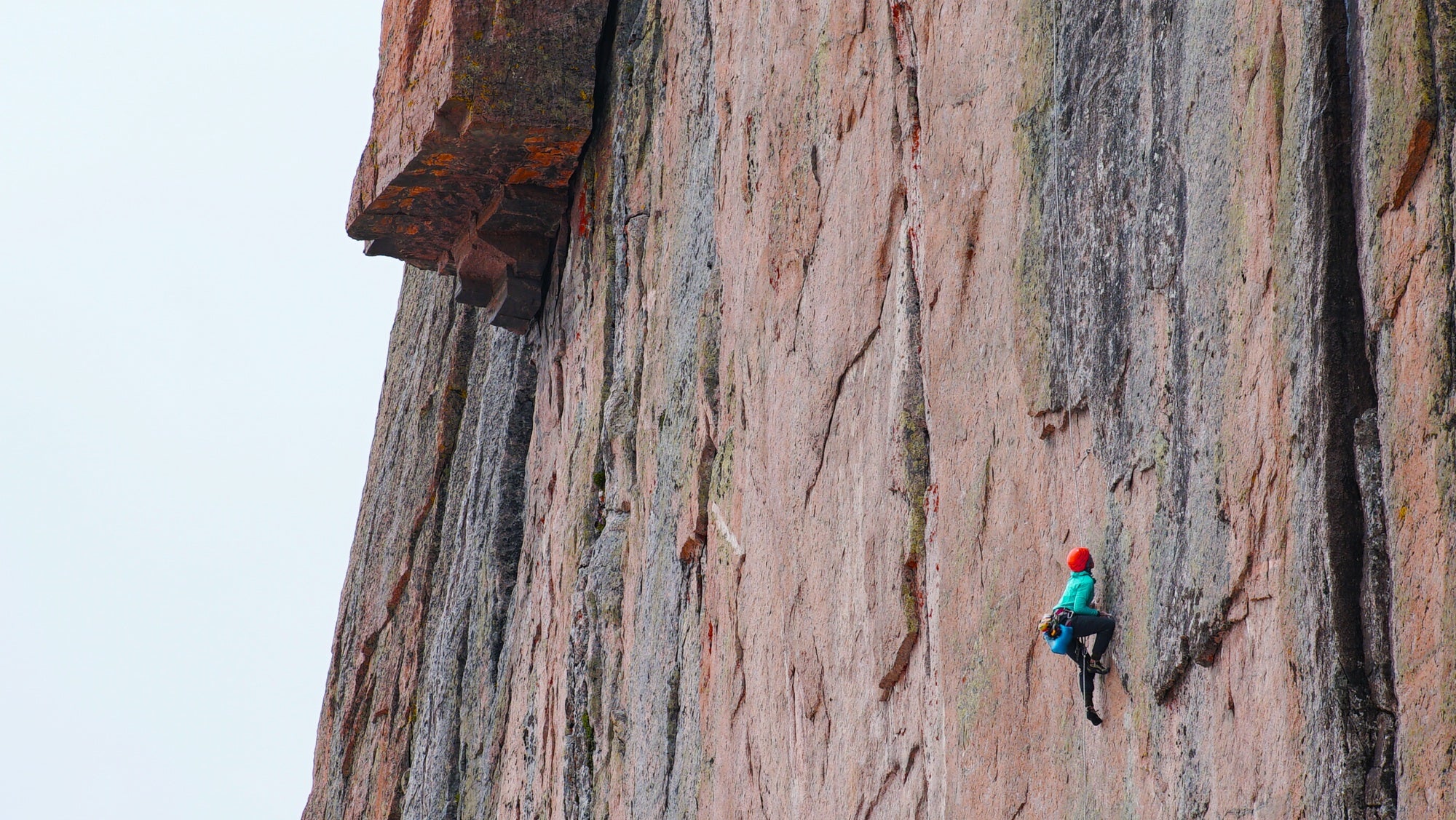 What was your mindset/approach to the route?
At first, my mindset was to simply going up to the top of the Diamond face, rappel into the route and top rope The Honeymoon Is Over (on a minitraction/rope soloing set up). I wanted to learn the moves, embody the space, and see if the challenge at all felt possible for me. I had a fairly open, “I will see how it goes” mindset at first and brought a flexibility to perhaps change goals if it seemed too hard. The season on the Diamond can be short and highly variable with sections of the rock becoming wet. After three times up there, I was doing all the moves without falling could link significant sections together and I was hooked on seeing how far I could go with my effort this season. On my fourth time rappelling in, I linked the entire route without falling and I became more attached to sending the route within the summer season. 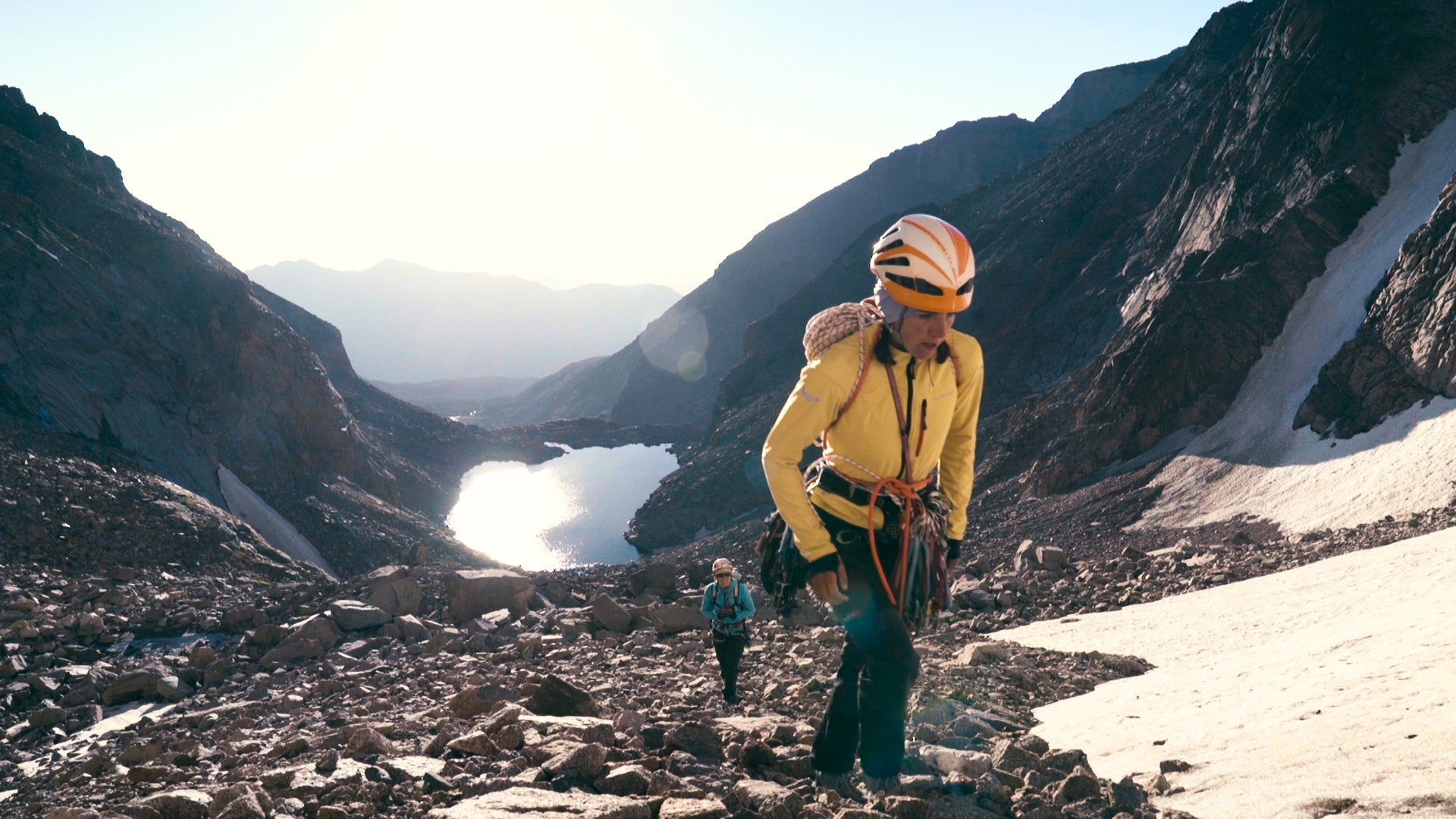 What were you doing to prepare specifically for this route?
The high altitude was the major new variable to me.  I had to train for my muscles to perform as the difficulties of the route lie roughly between 13,500 feet and 14,100 feet and initially your arms feel perpetually “flashpumped.” I tried to get up high as much as possible and sleep up at 12,000 feet several times. Simply hiking to the three to five hours to the Diamond each time got me fitter but it also required a lot of energy and planning. I tried this route over a two-month period and I could tell I was getting weaker as a rock climber as I was spending so much time hiking and resting sometimes getting foiled by the weather, wet conditions on the route or other variables such as finding a partner. Throughout I tried to maintain my climbing fitness by going bouldering in the gym or trying a close-to-the-road single-pitch project.

What gear, and what apparel, were the most helpful for this effort?
OR Realm jacket, OR’s mixalot gloves, OR long undies, wool socks with the toes cut off so I could put them over my climbing shoes to keep my ankles—and subsequently my feet—warm, OR flyaway thin layer top, Deviator Hoody and Whilrwind Hoody. And then for the cold belays—-OR Incandescent Down Hoody, Helium Pants for rain and CAMP puffy pants.