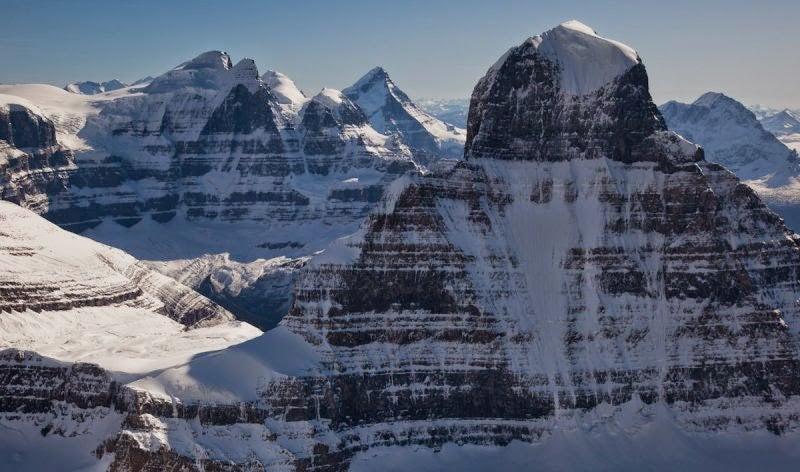 Somehow we pulled it off—the plan A, the big one. The kind of thing I didn't think ever happened.

The north face of Alberta is what I’d call a mythical face. In form, its pyramidal spike of a gable-end is so pleasingly intimidating, it must be one of the most spectacular faces I know of. This incredible photo by the aerial photographer John Scurlock is what inspired me a few months ago to put the north face of Alberta at the very top of my list of things to do.

We watched the weather forecast, and when a two-day window, with bad weather either side, cropped up, we set our sites on Alberta. Although it was only really a marginal window for what we were wanting to attempt, it was our last chance, so we had to take it. What we were wanting to attempt was the House-Anderson line on the north face—an incredible looking line put up at the end of winter seven years ago by the amazingly driven American team of Steve House and Vince Anderson.

With most of our gear stashed up there already, we made the walk in over Woolley Shoulder pretty quickly and were chilling out in the sun for most of the afternoon before we left.

The alarm went at 2.30 a.m., and everything felt right. It's amazing how different you can feel before an intimidating route, sometimes you'll do anything for that alarm not to go off, sometimes you can't wait to get on with it. After forcing a bagel and a liter of water down my neck we got wrapped up and headed out in to the perfect crisp morning. 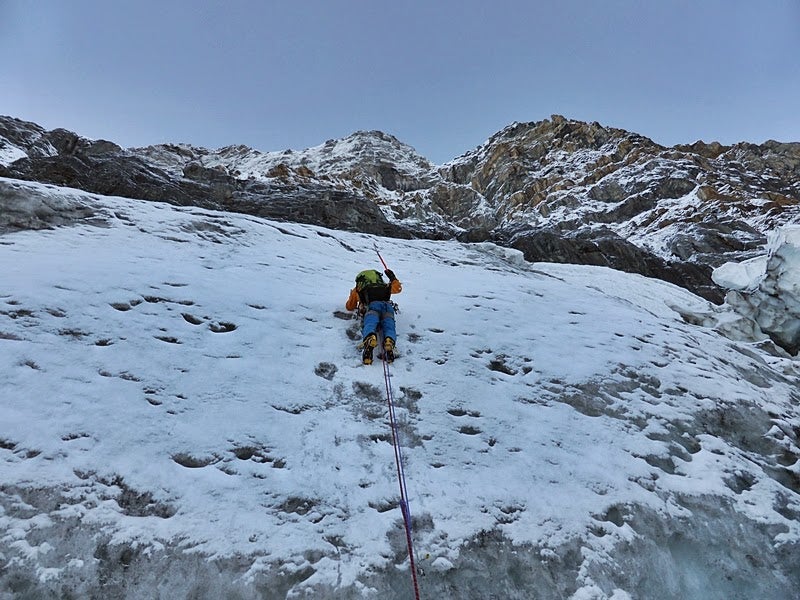 To get to the bottom of the north face, you have to make a series of raps to the lower glacier which feeds off the face. After walking for an hour we were nearly at the point where we down climbed to make the first abseil when I made a horrifying discovery. My belay plate was not on my harness. What! How is that possible? After quickly checking the contents of my bag, it was obvious I didn't have it. My magic plate has been attached to my alpine harness for about five years—I never take it off. Along with two slings, a screwgate and a ropeman, I never remove it for the precise reason that it would be catastrophic to not have it in a situation like this. After some brief thoughts of anger at myself and how cruel it all seemed, my mind immediately flicked on to thinking of alternative methods of belaying and abseiling. With about five raps to get to the route, multiple pitches of very technical climbing, and god knows how many raps to get off the mountain, my belay plate was going to be sorely missed. Nick wanted to bail immediately. The wind had picked up and we stood freezing ourselves while having a debate about how possible the route would be with one belay plate. Things had suddenly become desperate just an hour after waking up. I did my best to persuade Nick, and in the end he agreed to give it a shot, I owe him for giving it a chance, because with roles reversed I’m not sure what I’d do. I still don't know where my belay plate is.

We made about four abseils, two of which were free hanging, plus some down climbing to make it to the lower glacier. We managed to leave as little gear as we could, conscious that we needed to conserve it for the climbing ahead. I now know we actually abbed off the wrong spur, and it would have been better to go 200 meters further north.

With this over, we were now beneath one of the most inspiring faces I’ve ever stood beneath, and we could see it was absolutely plastered with whiteness. It looked awesome, so we strolled over to the schrund and got stuck in blue glacial ice.

The brilliant line of the House-Anderson goes up the ice streaks in the centre of the headwall, with hard mixed climbing above and beneath. This is why I love alpine climbing. The lines on big mountains are just so inspiring. The pitches up to the top ice blob had been repeated by Canadians Jason Kruk and Joshua Lavigne when they climbed their great looking new line on the left side of the headwall in 2012. 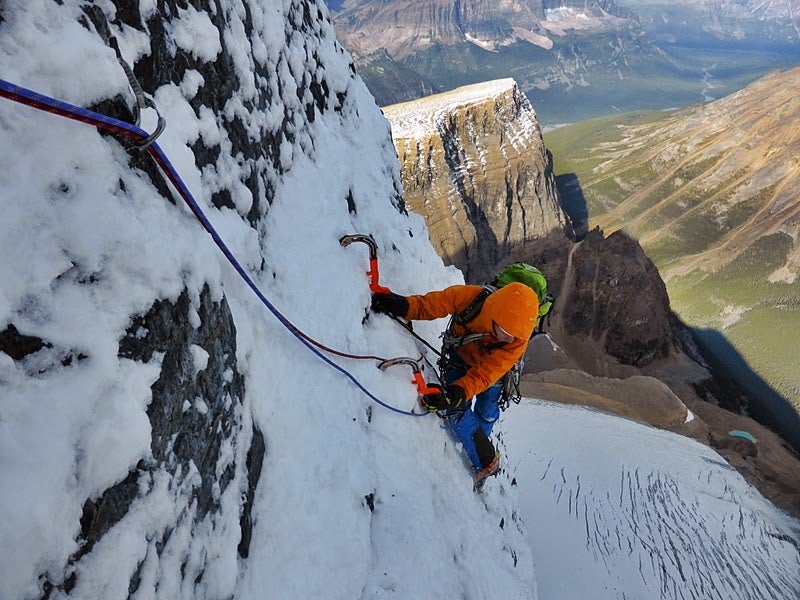 We climbed the last few pitches of day one in the dark. A 50-meter pitch of bullet-hard WI5+ with wild stemming on the right wall was exhausting. The pitch above was an incredible yet very worrying skin of vertical and overhanging ice. Nick put up a brilliant lead, and I’ll leave it to him to tell the story of how he climbed it. I spent the whole pitch belaying with my bag on top of my head as I was directly in the firing line.

A pitch later we were relieved to find the legendary cave feature that Kruk and Lavigne found. Although we knew it was there, we didn't know for sure whether we'd be able to get into it, or if it was iced over or blocked somehow. We were relieved to be able to enter it and have the most surreal bivy of our lives. Narrow to begin with, we crawled to where it opened out and it felt like entering a cathedral. A huge tube covered in rime ice penetrated into the mountain. We weren't sure how deep to go, as we needed to have some indication of light outside, but it goes deep, really deep.

We didn't take bivy kit. I had a duvet jacket and some insulated trousers, curled up on the ropes and had a few hours of shivering with occasional bouts of sleep. 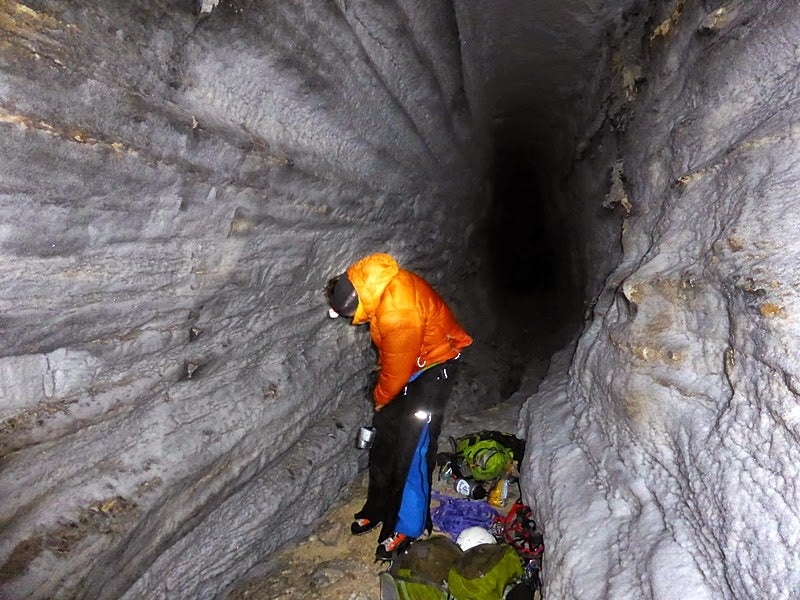 After leaving the cave, we climbed a few pitches then hit a kind of dead end. Nick went up and left, and belayed beneath a steep blank-looking wall. I started up one weakness, which after a little excavation turned out to be a blank seam. I then traversed right and noticed a steep flake firing up the wall. It looked improbable, but I got involved anyway. I battled my way up it with arms exploding for the final 10 meters. I think, given the circumstances, it was one of my hardest leads. I've done much easier VIII's in Scotland.

Three continually tricky pitches later, we were off the headwall. 150 meters of easy-angled rock and ice lay above us, which we climbed in three long pitches to reach the south east ridge.

By this point the weather had taken a real turn for the worse. It was windy and snowing, and as so often is the case with these things, we walked straight over the summit—no hug, no handshake. Not even an acknowledgement that we were on top. The alarm bells were starting to sound in my head that we needed to get as far down the mountain as we could before darkness fell and the weather worsened more. 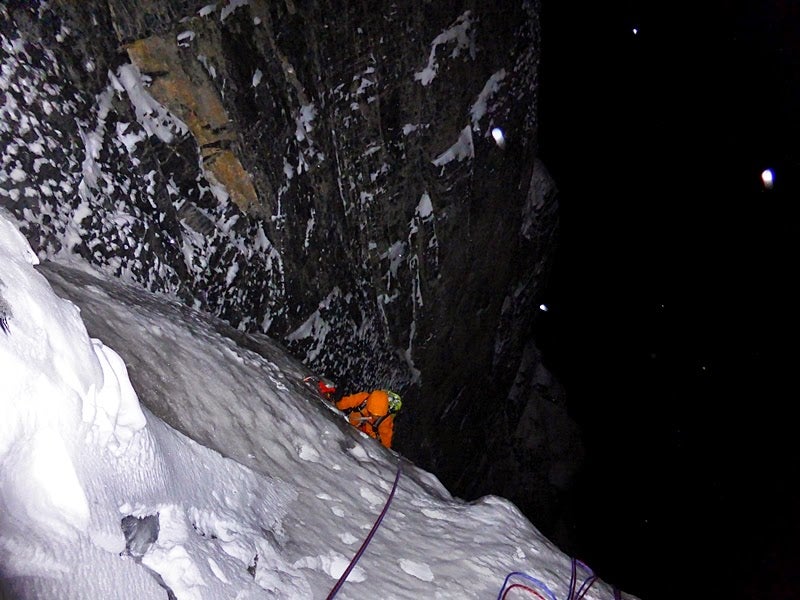 After down climbing the summit ridge, which seemed to take forever, we located the top of the Japanese route and started abseiling down the east face. The Japanese route, the easiest route up the mountain, is probably the worst heap of choss I’ve ever seen. Extreme care was needed not to chop the ropes or worse, with falling rock when we abbed. The night went on and on, and once we finished with the abseiling, we started down climbing the easier-angled lower sections. In the dark and snow, it was very hard to navigate, and we were cliffed out everywhere we went. In the end, we decided to call it and spent another night shivering in a fetal position. I got my head under a boulder and tried to find a happy place.

After scrutinizing photos I’d taken a few days earlier of the mountain in good weather, I managed to work out where we were, and the next morning, with blocks of wood for feet, we stumbled out onto the glacier after the most intense bit of navigation I’ve ever done. 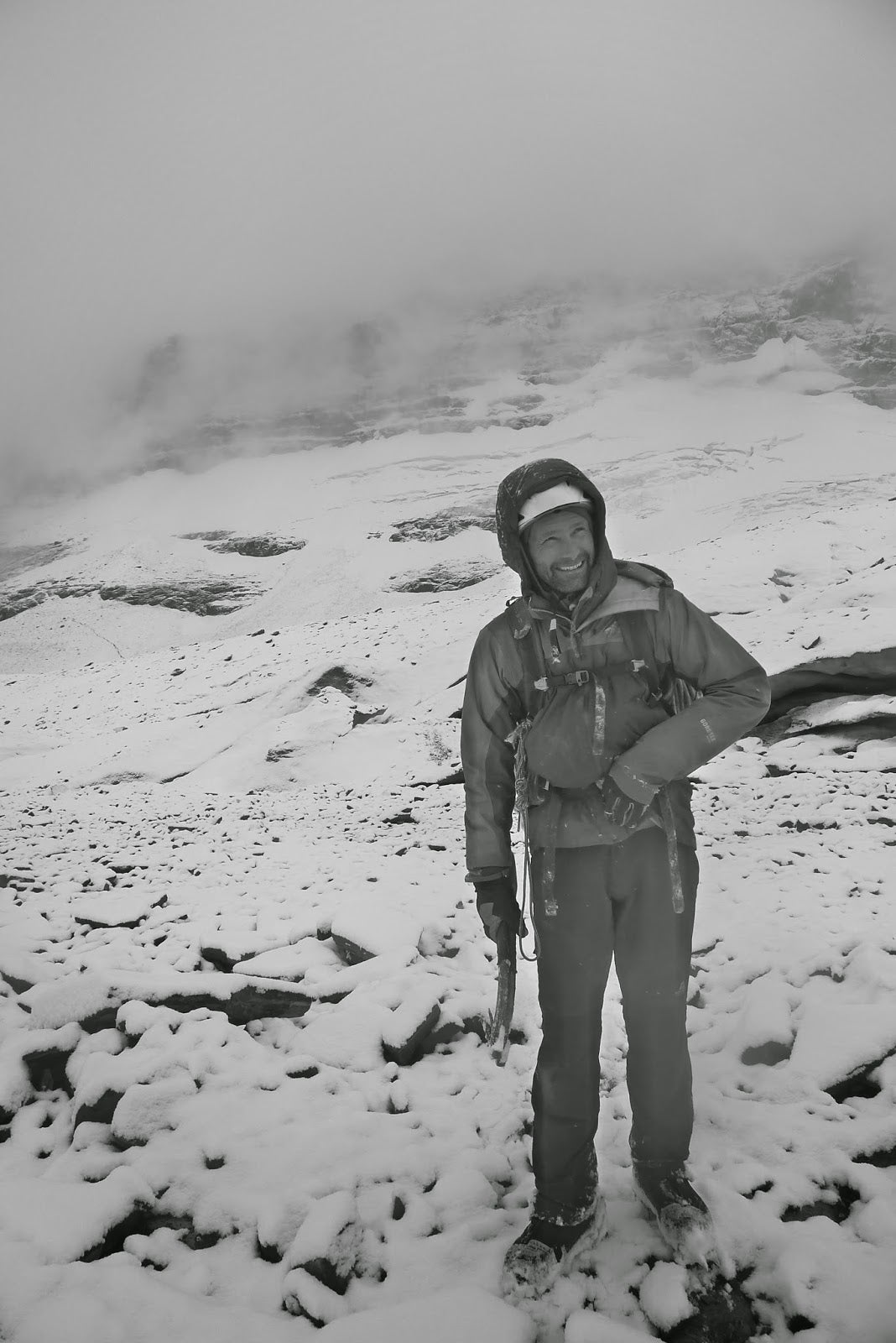 Sitting by a fire with a beer in my hand, it seems to be sinking in. But I’d like to say that climbing that line in March like Steve and Vince did is seriously inspiring. They must be made of tough stuff.