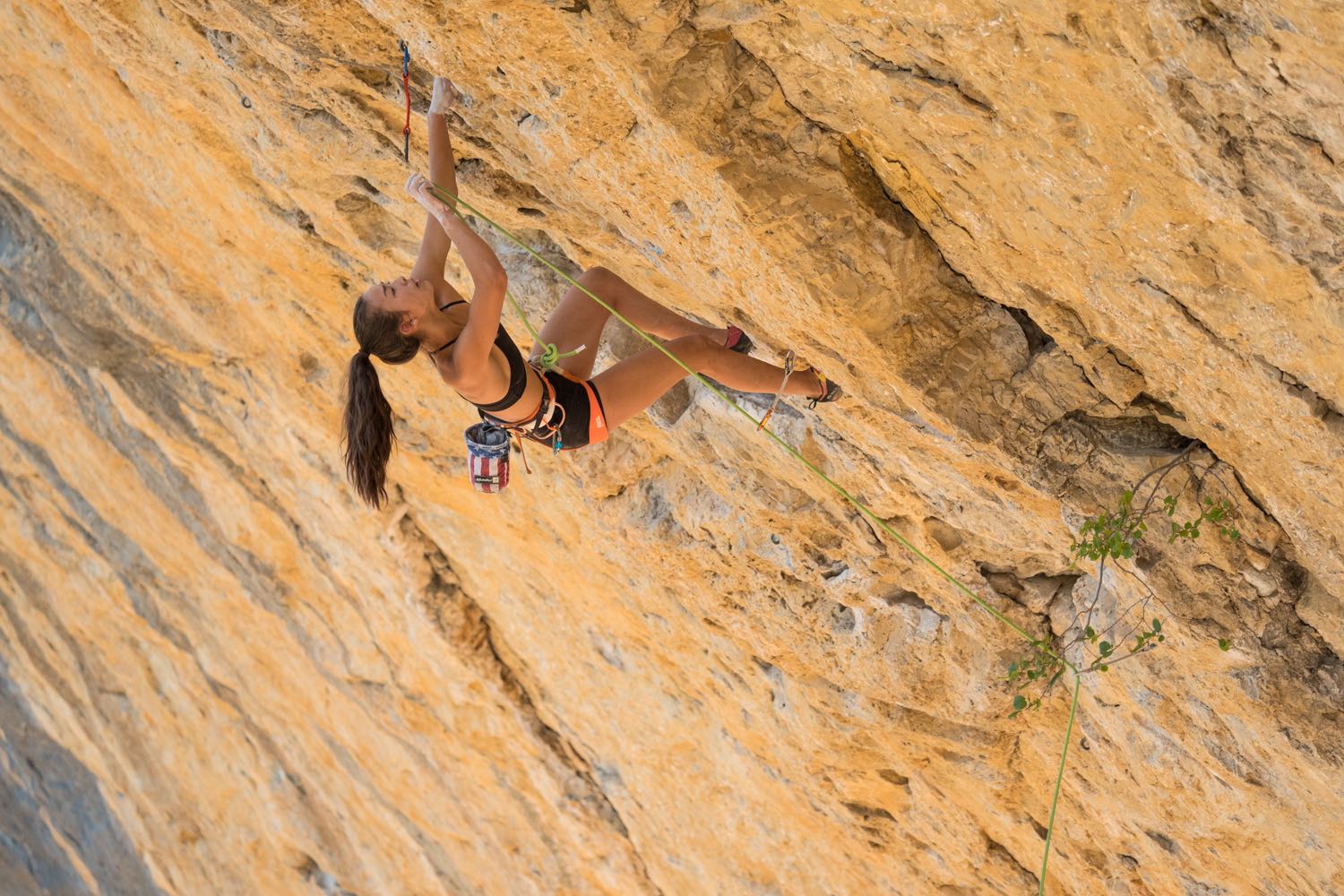 There’s a photo of Quinn Mason when she was 9 years old, placing fourth at Youth Nationals, qualifying for the national team. It marks the moment she realized how much she really did care about competition and winning in climbing. Today that photo also symbolizes something else she’s grateful for—and proud of: “Out of all 10 finalists, I think I’m the only one still competing at a high level,” she says, now halfway through high school.

She’s a five-time Youth National Climbing Team member and qualified for the 2020 world cups as an adult. But more than wins or sends, Quinn seems to be focused on the longevity aspect of her climbing life. “I’ve had ups and downs, and to have stuck with it to be where I am now—that is my proudest accomplishment.”

We caught up with Quinn—one of the newest members of the Outdoor Research climbing team—a couple of months into the pandemic, and one of the first things she mentioned is how she had taken some time off at the beginning of the lockdown. With world cups canceled (she had qualified for the first time), she took it easy for a little while, sewing masks for family and friends, dabbling in cooking and painting, and encouraging others to relax a bit, too, through her social media channels. 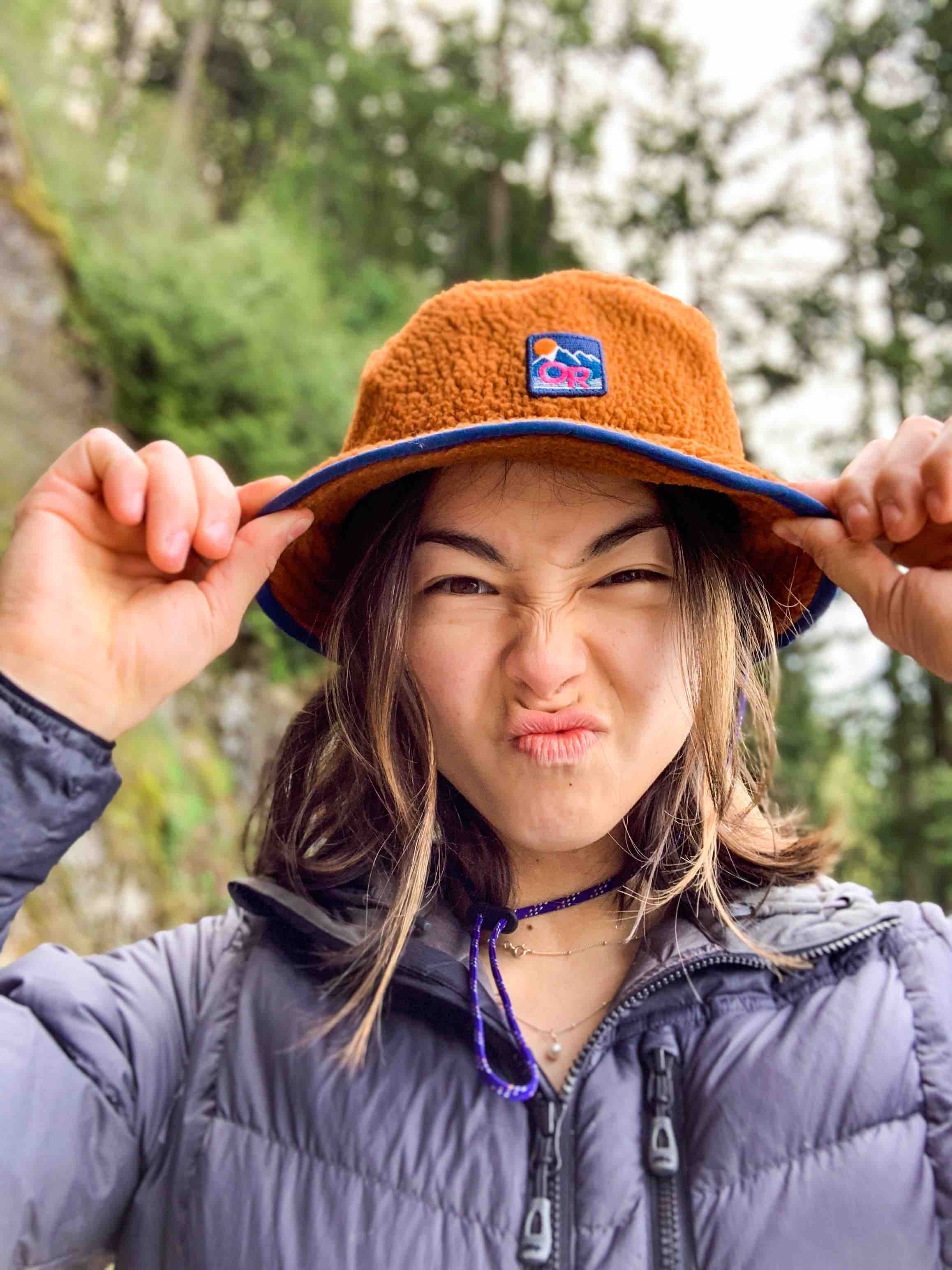 “I want to let people know, you don’t have to train right now,” she says. “It’s great if you can—but it’s a good time for everyone to take a break. I gave myself a little reset, and I’ve been feeling pretty motivated now that I’ve had some time off.”

Quinn admits she’s never been very good at resting. But if she’s going to enjoy a sustainable climbing career and not get injured or burn out, rest is an important aspect.

“It’s easy to want to ignore it, but you know deep down that in the long run, it’s going to be about taking care of your body,” she says. “If you don’t do that, there won’t be a next season.”

Quinn grew up in Seattle, climbing outdoors with her family, and sees climbing as part of the big picture in her life—with or without competition. For her it’s a lifestyle and community that goes beyond personal performance.

“You can meet climbers from across the world and have something in common,” she says. “That bond that everyone shares is definitely something unique to the sport. It’s because it’s all about pushing your own limits, and that allows you to feel for other people—when they’re pouring everything into it, you can relate to them. You can feel the same kind of joy when they succeed.”

She’s aware of the burnout rate of young competition climbers, and keeps her perspective more broad. “If I'm not super motivated to train, I still have motivation to climb hard,” she says. “And even if I don’t feel like climbing hard, I still have a reason to go to the gym, to see my friends.”

To Calm The Nerves

As Quinn became increasingly competitive—and successful—as a climber, nerves began to have an impact. It took her a while, but in the past couple of years she’s learned a few coping exercises that could be helpful for other climbers and non-climbers alike.

“I definitely have developed a strategy,” she says. From coaches she began to learn the power of her own breath. “It seems so simple, how taking deep breaths can actually calm you down. Or how you can use your breathing to psych yourself up.”

She also listens to music in the isolation zone during comps, and uses aromatherapy, rolling lavender essential oil on her wrist so that whenever her arms move past her face she gets a calming whiff. “I find it really works for me,” she says. “I can smell my wrist and take a few deep breaths.” 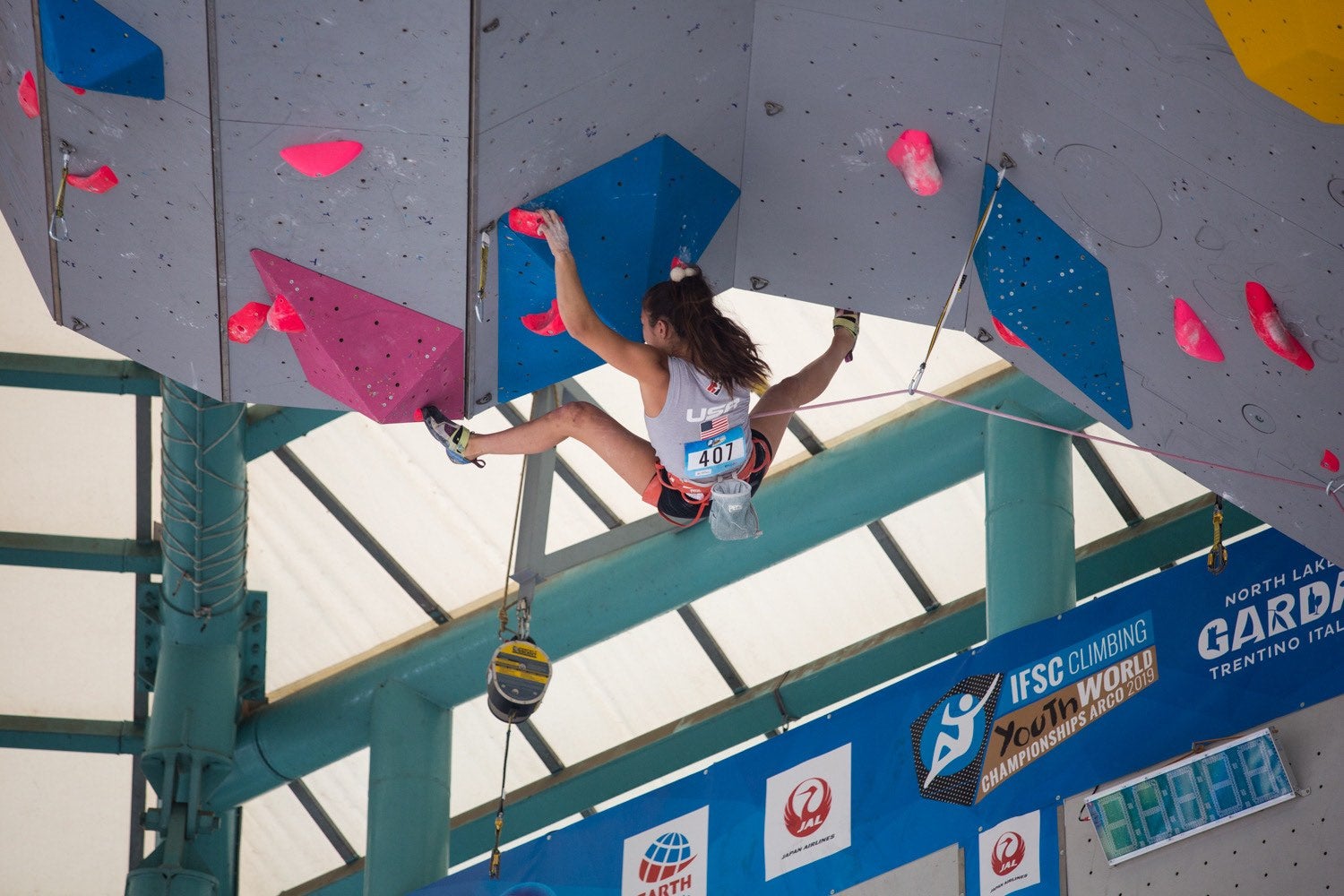 Another strategy Quinn leans on is focusing on performance over sheer strength. “In terms of training, a lot of climbers are focused on just pure power and pure finger strength,” she says. “If they come away from competition or a project outside and they can’t do it, the instinct is to just get stronger. Which I do stand behind. But more of my training is behind performance.”

What does that actually look like? “Being able to execute the same grade over and over and over again, no matter what the boulder is, or the sport climb,” she says. For example, she’ll give herself a limit for working on a specific boulder. “Instead of just trying it until completion, it’s walking in and saying, ‘I’m going to try each boulder no more than three times.’ Even if it’s a boulder you could complete in 10 tries, only give yourself a certain number of tries, so you have to do it in that number of tries or you just move on to something new. So you get a lot better at performing.”

Confidence That Carries Over

Over the years, Quinn has seen her lessons, practices and experiences from climbing bleed over into other parts of her life. “I think if you asked anyone from where I went to school previously, they would probably say I’m shy or introverted,” she says, but within the climbing community she’s definitely extroverted.

“Whenever I step into a climbing gym, I have a different wave of confidence,” she says. “As I’ve grown up and found myself more, it has come through in other places.”

For example, she spoke at the Access Fund annual summit last fall. “I think the fact that it was me speaking about climbing made a pretty big difference,” she says. “It was definitely nerve-wracking But my parents said they never would have imagined I would have done that just a few years ago.” 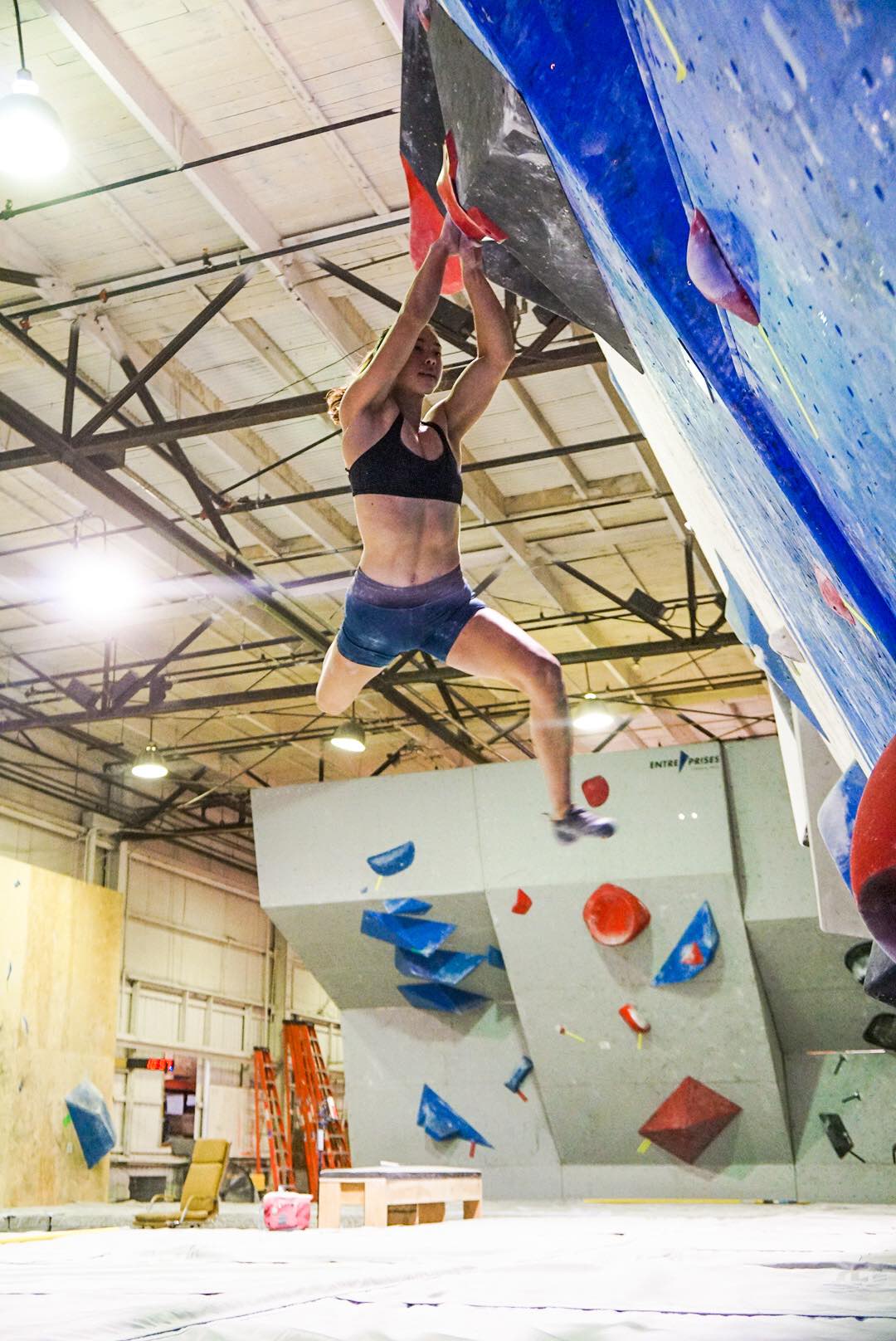 A little over two years ago, Quinn began coaching, working with younger climbers on her team. While she’s progressing in her own climbing career, coaching is something that grounds her in the very basic things she loves about the sport. The younger climbers’ pure joy and excitement to compete reminds her to slow down and enjoy climbing herself.

“Coaching has helped me remember to enjoy the moment and remember why I even like competing to begin with,” she says. “It definitely changed my own ability to compete.”

And for the moment, with all climbing events cancelled, slowing down and enjoying climbing seems like a very wise strategy indeed.

Get To Know Quinn

Favorite book: “With Winning In Mind” by Lanny Bassham. “There are probably five copies going around on my team.”

Favorite movie: “My family and I just watched the whole Marvel series. I had watched a number of them, but was not very invested. After watching 21 of them, I’m more invested.”

Favorite crag snack: Cosmic Crisps. “It’s a type of apple, and they’re my new go-to. They’re a combination of Honeycrisp and Enterprise—the first Washington red apple. I never knew I was particular about apples until I had one. They’re kind of sweet and tangy at the same time, and very dense.”