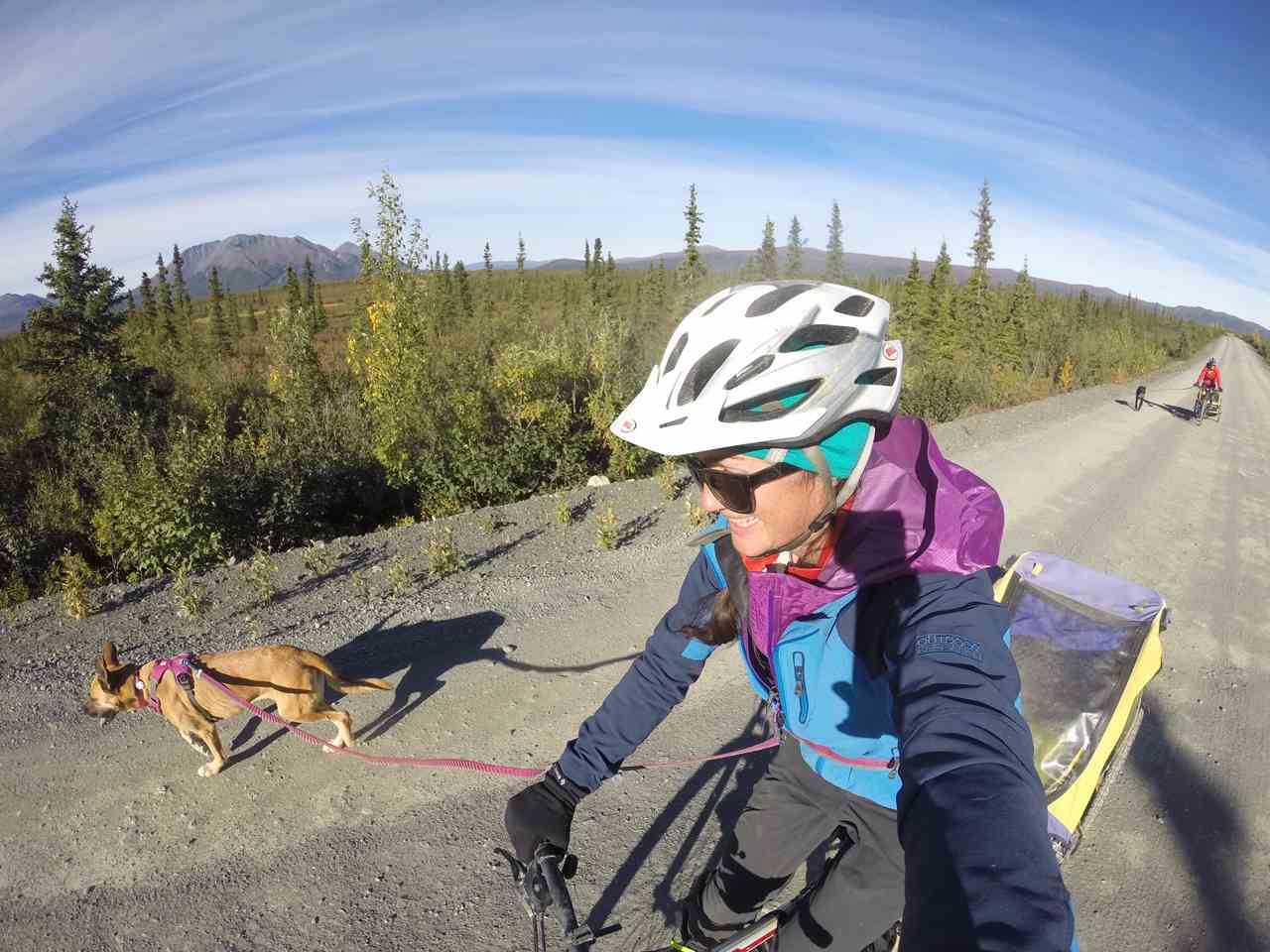 After dreaming of visiting Alaska for years, we arrived and realized that we hadn’t actually planned anything to do once we got there. We quickly scrambled to come up with some semblance of a plan. Because we’d spent the last week driving 2,000 miles through British Columbia and the Yukon Territory, we were feeling like getting out of the van for a while and settled on trying a bike tour. We had, after all, toted four bikes north with us on this journey, and after seeing all the rock dings and dirt they had accumulated, we felt obligated to show them some love. After a look at the map and quick Google search, we settled on biking to the Arctic Circle, a 700-mile round trip slog up a dirt haul road, complete with semi-trucks, 12-percent grades and freezing temperatures. Within 36 hours of conception of our plan, we had found and purchased the only Burley trailer in the area on Craigslist (for Titan, we already had one for Star), bought food (including an embarrassing amount of Snickers), packed, and set off on our adventure.

Unfortunately, this adventure was not to be as my bike catastrophically broke after one mile on the muddy road. Shortest bike tour ever. This was also our first bike tour, and short as it was, we felt that we had learned a few things. We hung our heads and made our way back to civilization and a bike shop and prepared for round two. 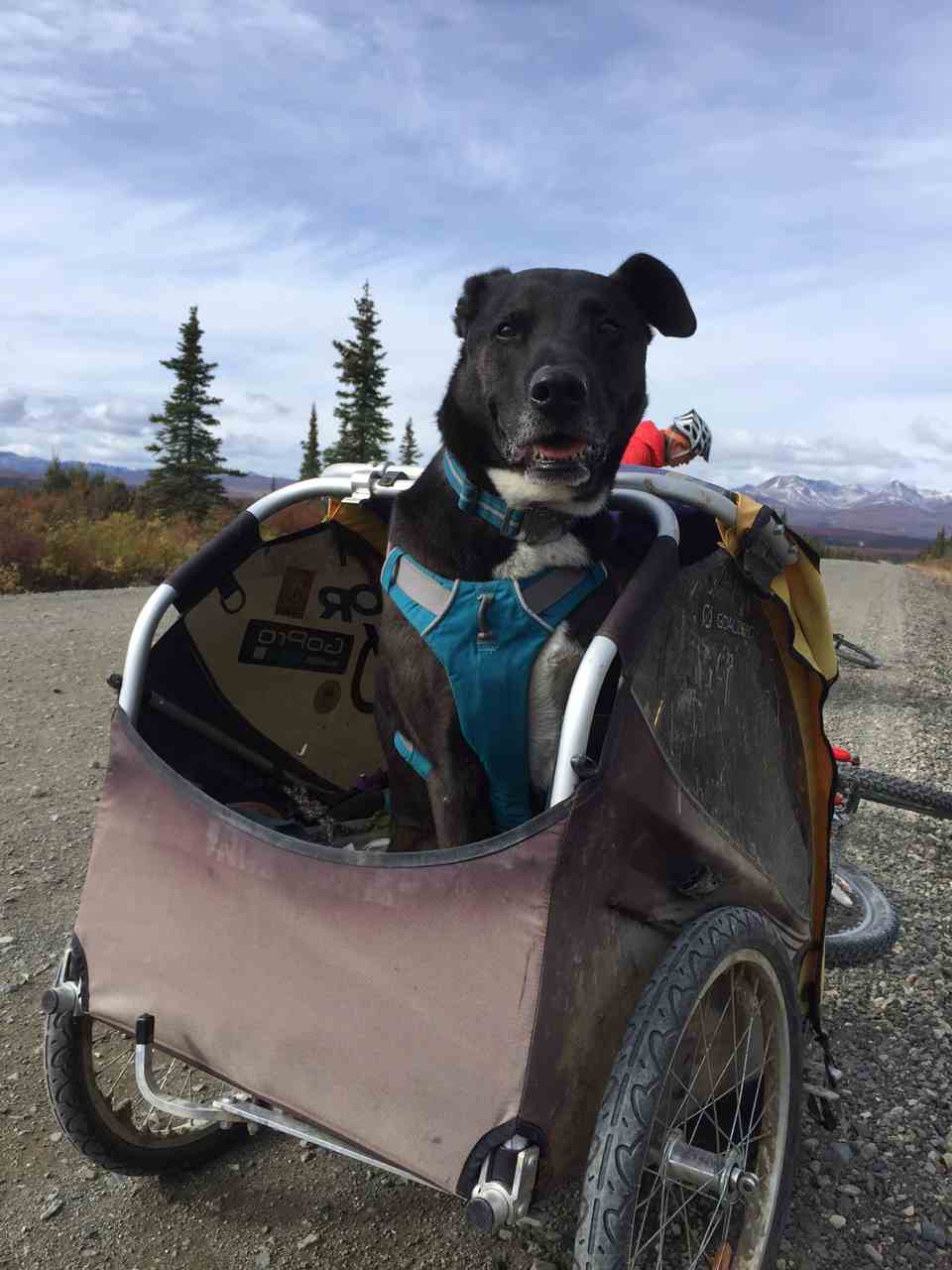 For our second go, we decided on an easier and more often biked route, the Denali Highway. This 135-mile dirt highway runs from Cantwell, Alaska, to Paxson, Alaska, and offered us great views, fairly mellow riding, easy camping and a much more maintained road. We set a more realistic pace and gave ourselves 10 days to bike the road in both directions. (By most online accounts, people usually just bike this road one way, but we couldn't really figure out a way to run a shuttle, so we decided to do an out-and-back of the entire road).

As this was our first bike tour, we didn't have the typical equipment associated with touring. We didn't have panniers, touring bikes, or ultra light equipment. What we did have was one mountain bike, one hybrid cross bike, two Burley trailers, two fit dogs, and two very excited humans. That covered the basics of what we would need to be successful. Although we tried to keep weight down, we ended up taking four bear canisters (two with human food, two with dog food), a floor pump and a fairly heavy car-camping tent. With Titan in my trailer, I estimated that it weighed between 100 and 110 pounds, or about 10 to 20 pounds less than me. Fortunately, we hike a ton and had just come off a 170-mile backpacking trip with the pups, so we knew they would be able to run a fair bit each day, including any hills. 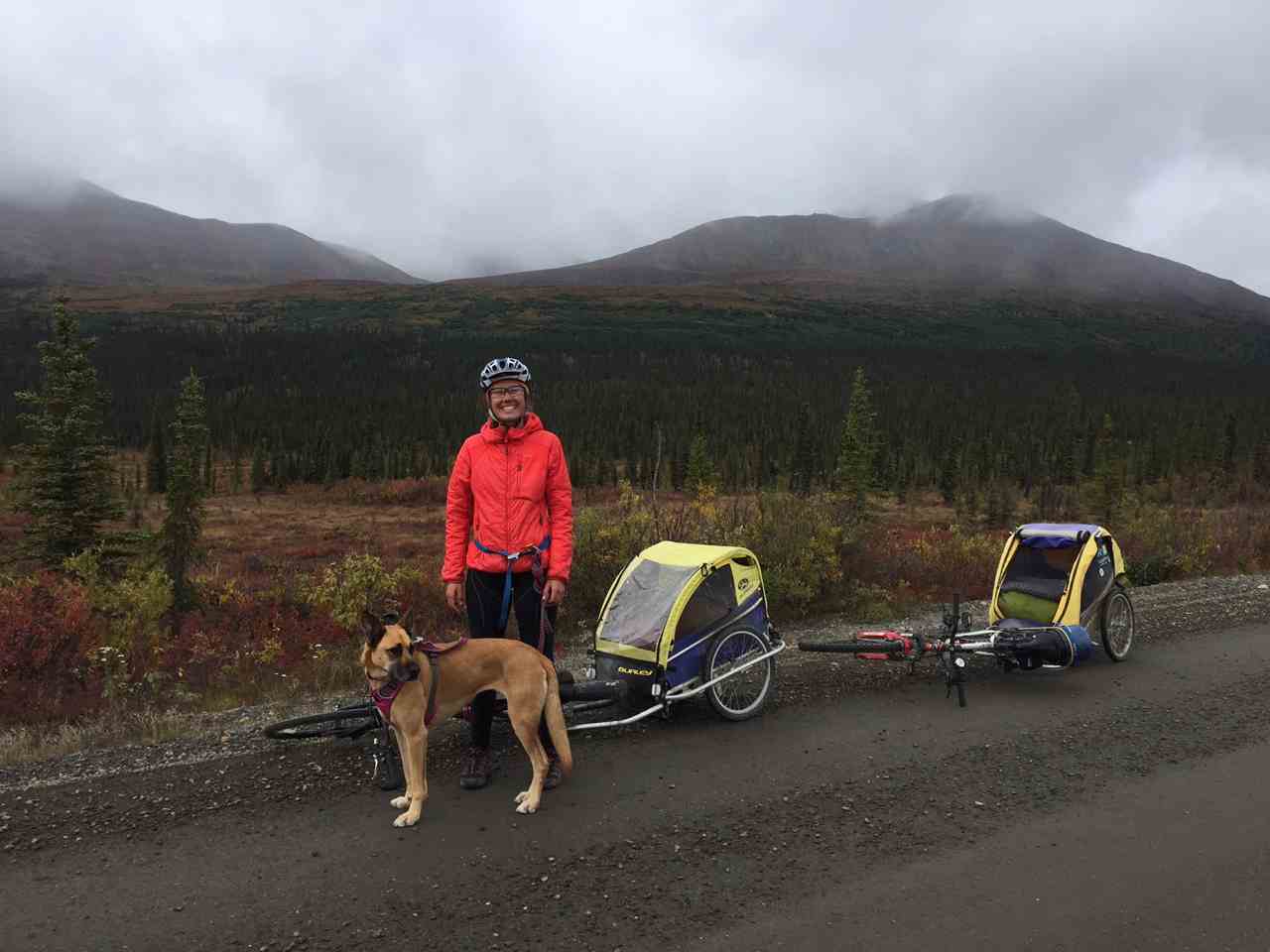 After our one-mile slog through the quicksand-like mud of the Dalton, the Denali felt easy and we marveled as we passed each mile marker. "We're doing it!" we exclaimed. Before we knew it, we had surpassed our goal for the first day. We found a little side road and followed it to a great campsite with a view of the mountains. We set up camp, made dinner and got in our sleeping bags. Unfortunately, it was still early evening, and it was late summer in Alaska, so we laid awake for hours waiting for the sky to darken.

As the days passed, we got better and better at bike touring. We learned to bike longer and later so we wouldn't have much time to wait before bedtime once we reached camp. We figured out that you shouldn't pass up an opportunity to follow the side roads out to more private campsites. A couple times we didn't have any option and had to camp in pullouts right next to the road.

Once Chelsea randomly woke up in the middle of the night and looked out at the sky. She shook me awake and we lay in our warm sleeping bags, marveling at our first display of the Northern Lights. Another evening, a cow moose and two calves ran by 100 yards from our tent. We saw a caribou dart across the road in front of our bikes and watched another critter, that we guessed may have been a porcupine, waddle off into the bushes. 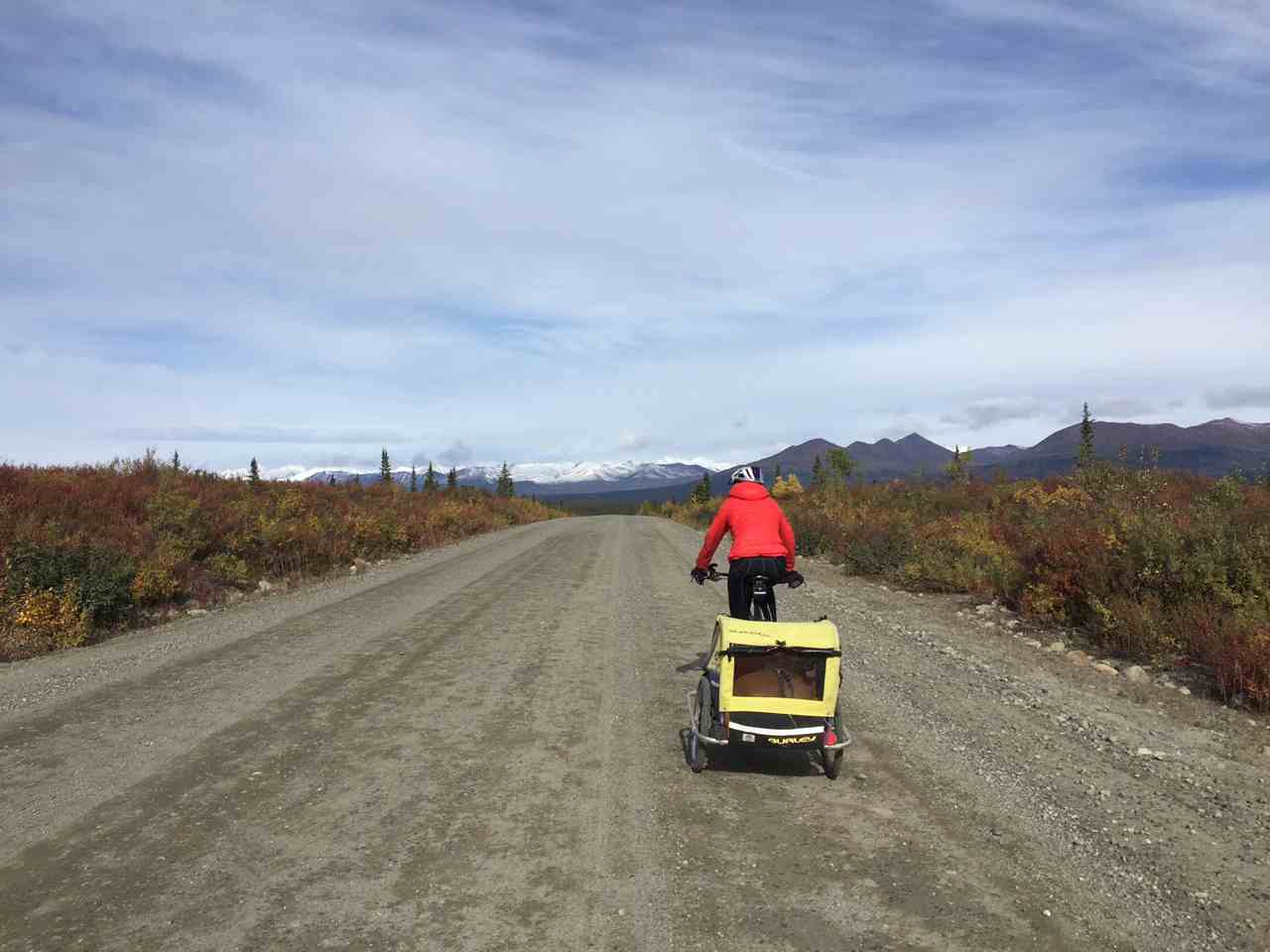 We pushed our burning legs to pedal up the hills as the dogs trotted easily beside us, then loaded them into the Burleys and went tearing down as the wind whistled through our ears and our eyes teared up. On the morning we were to climb McLaren Pass, the second highest highway summit in Alaska, my granny gear broke. I kept saying that I would never make it without that gear, but I kept my head down and before I knew it, we were victoriously at the summit.

We were within 10 miles of Paxson, our halfway point, when the rain came. We hunkered down in the tent and covered the bikes with a tarp. When it was still raining the next morning, we decided to begin our return journey rather than bike to Paxson just to turn around and bike a bunch of treacherous hills back in the rain. After all, we weren't sure that there was even anything in Paxson. For the record, if there had been a bakery, we totally would have done it. Biking in the rain was very tough, cold and miserable. Everything was soaked, but we pushed on and the next morning the sun came out again, bringing along with it a freezing headwind.

On one especially windy night, the gusts lifted our tarped Burley trailers into the air and dropped them sideways onto the side of the tent. We scrambled around in the dark to secure them. When we woke in the morning, there snow flurries stung our faces. 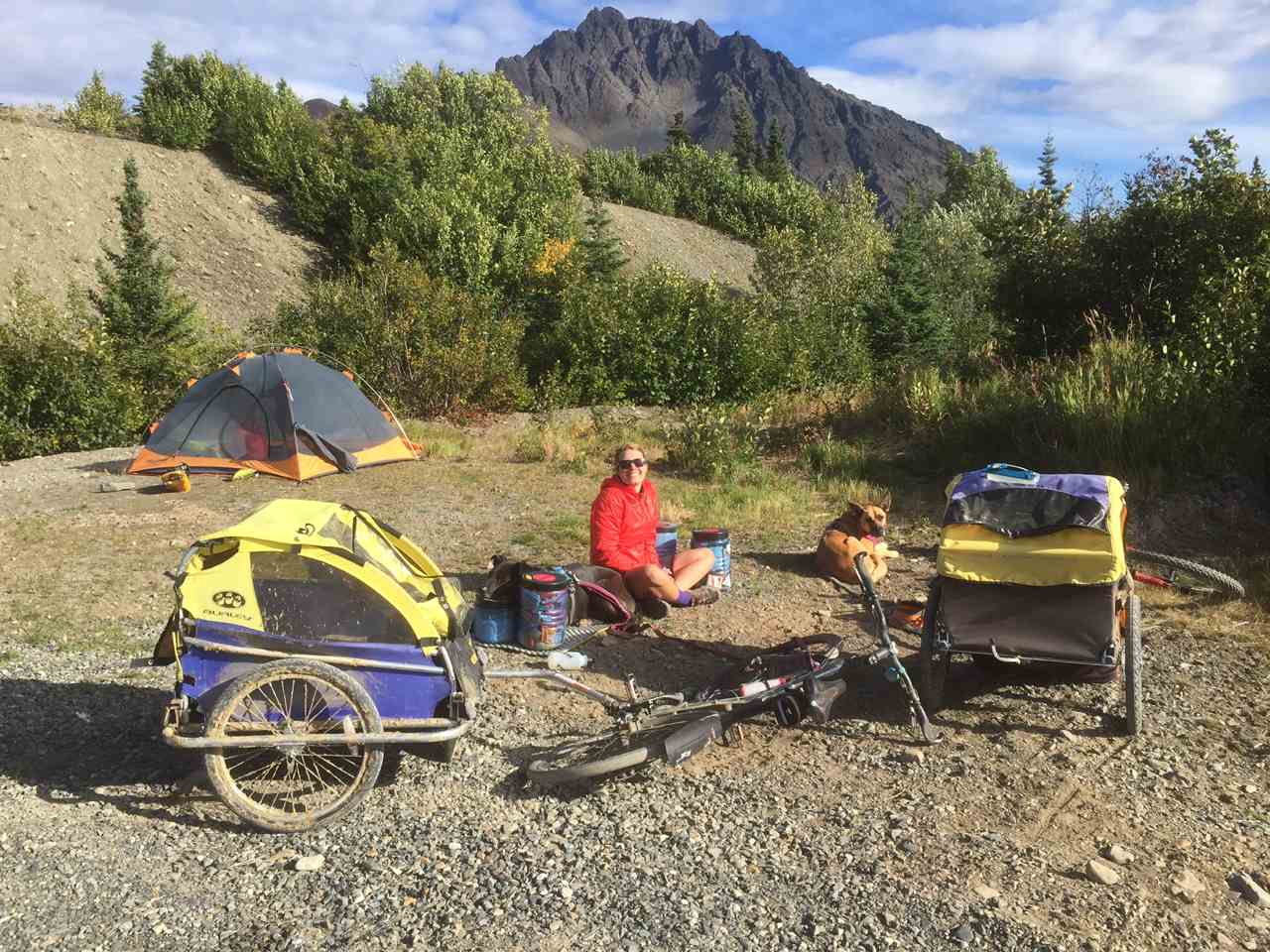 Each day, we biked by mountains and some of the most beautiful fall foliage we have ever seen. We reveled in our ability to explore the terrain under our own power and to share the experience with Titan and Star. Each night, we all curled up in the tent, content, tired and feeling accomplished. We went anywhere from 25-35 miles a day, which doesn't sound like much from a traditional bike touring standpoint, but for a couple first timers and their pups on mountain bikes on a dirt road towing heavy trailers, it seemed pretty good to us. We ended up completing the ride two days early. As soon as we reached the van, the dogs hopped into bed and fell immediately asleep. We packed our belongings up, made several boxes of mac and cheese and exuberantly repeated, "we did it!" until we fell asleep dreaming of our days of exploring beautiful Alaska by bike.