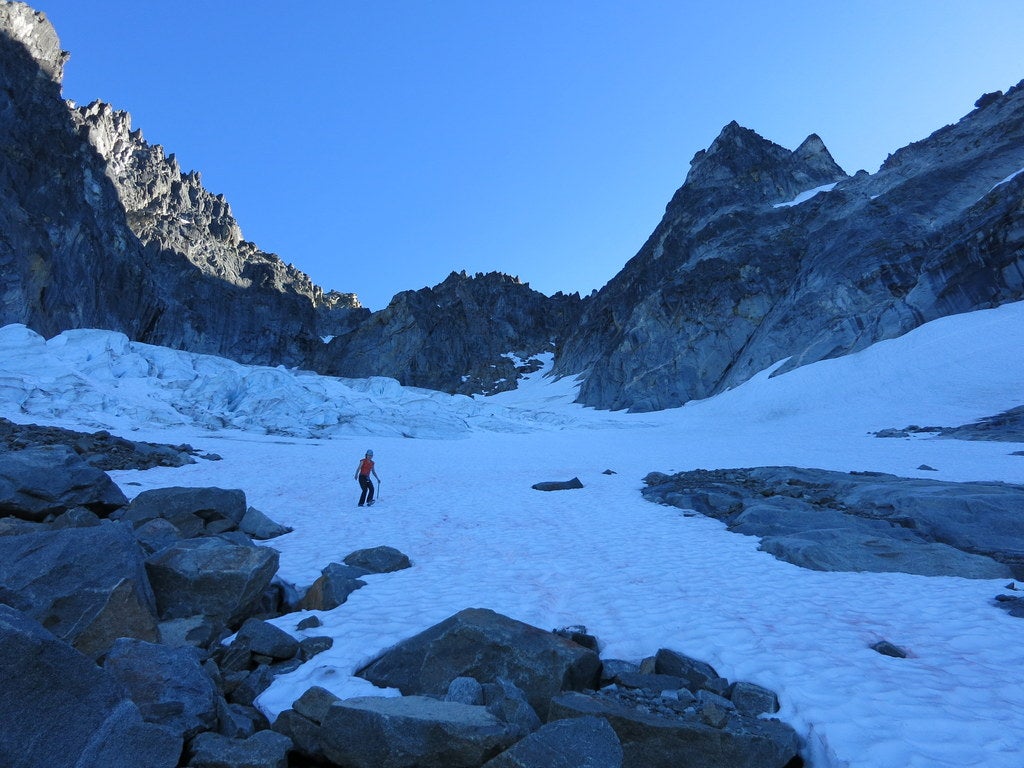 By far the most impressive and complex peak near Leavenworth is Mt. Stuart. Stuart hosts excellent routes for all seasons, but for a good snow and glacier climb with classic ski potential, the Sherpa Glacier is an obvious choice.  From Leavenworth, the hike in to the cirque beneath Stuart’s north face takes about 4 hours (half on trail, half minor bushwhacking) and leads to a beautiful clearing at tree line where the Sherpa, Ice Cliff, and Stuart glaciers loom above.

The Sherpa is the left-most (eastern) of the three and curves gently up and rightward, steepening as it arcs towards the seasonally-exposed bergschrund where the glacier detaches from seasonal snow in the couloir above. From atop the narrow couloir, class 2 and 3 terrain on or just south of the ridge leads to the peak’s summit. The Sherpa is generally in excellent shape as a ski objective throughout winter and into late June, though standard avalanche concern should be taken as the slope angle is prime for big slides. The Sherpa Glacier also provides an excellent and fast descent from Stuart for those who have approached other routes from Leavenworth. The glacier grows more and more broken up during early summer, but by leaving a few rock anchors or bollards for rappels, it can generally be descended through early August.

On warm days when the glacier is still well-filled in, the softened snow of late afternoon can be descending without crampons or an ice axe. Such conditions are ideal for the nearby classic North Ridge on Stuart, as one can opt for the shortest approach (from Leavenworth) and a fast and direct descent via the Sherpa Glacier without carrying anything apart from rock-climbing equipment.

For more beta, check out MountainProject.com’s page on the Sherpa Glacier Couloir [LINK]