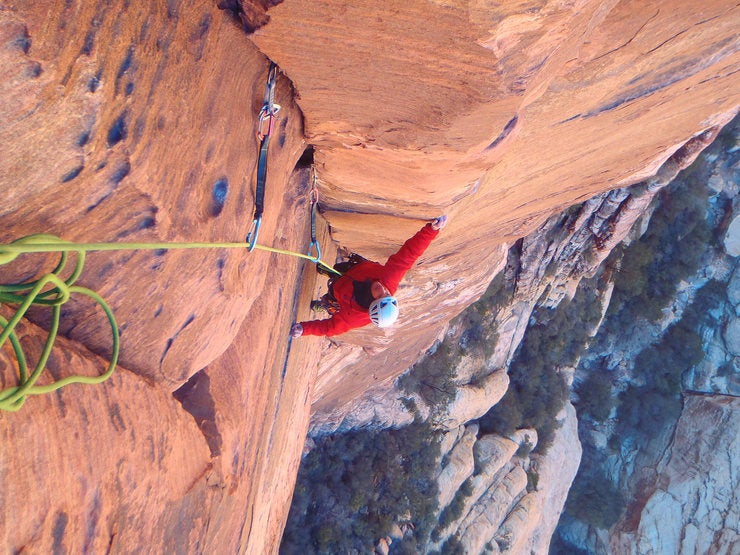 Many of Red Rock’s classic long routes were established by folks from one of two divergent philosophical bents. The Uriostes—Jorge and wife Joanne–decided to create routes for safety, enjoyment, and ease of future climbers. Many of their routes included long sections of bolted climbing, and quite a few (Dream of Wild Turkeys, Levitation 29) are popular classics. Meanwhile, the alpine-inspired concept of climbing a bold, ground-up line with few bolts and more mental challenges was espoused by the “Stone Masters” and “Adventure Punks,” folks like Richard Harrison, Nick Nordblom, Paul Van Betten and Sal Mamusia. The latter group is responsible for a route which bears the group’s unnofficial moniker and is an accordingly mentally engaging outing. Each of the route’s five long pitches is 5.10, and and the only protection bolts on the entire line were placed later—against the wishes of the first ascent team—on the final offwidth pitch, which was climbed onsight by Richard Harrison with nothing but a single old Forged Friend for “wide crack” protection. For bonus points, and armed with modern beta and sticky rubber, skip the two retro bolts. Feeling lucky? Well, do ya, punk?