MountainProject.com Route of the Week: Dragons of Eden 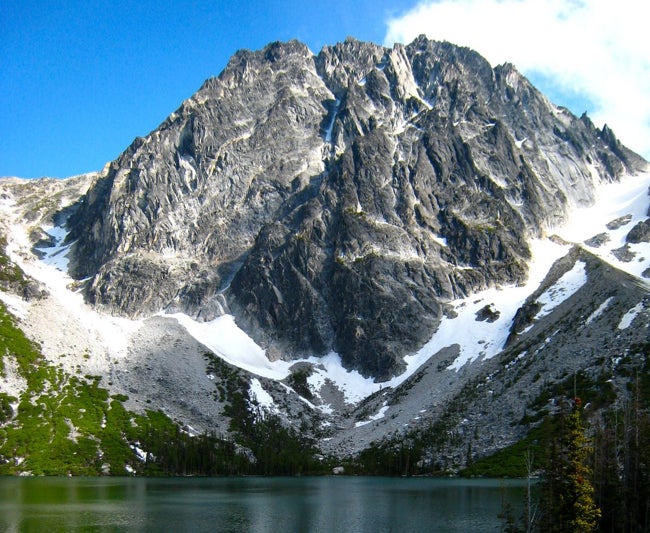 Dragons of Eden (DOE to the Der-town locals) was established in 1988 by Wayne Wallace and Robert McGown on the imposing north face of Dragontail’s NE buttress. The line was complete with the addition of one belay bolt and several sections of aid climbing, eventually merging with the existing NE buttress route after 800’ or so of very steep cracks and corners. The route was first free climbed a few years ago by Jens Holsten and Sol Wertkin, and it has since received a few other free or mostly-free ascents.

DOE has the shortest approach of any alpine rock route in the Stuart Range, beginning off the talus slopes that lead to Aasgard pass, just 700 vertical feet or so above Colchuck Lake. The route is stacked with several excellent and well-protected 5.11 pitches, with an initial 5.10- hand crack to get your blood flowing, and a thin corner rated .12a as the route’s crux.

If you aren’t interested in Dragontail’s upper buttress and summit, Dragons of Eden can also be rappelled with two 60m ropes, staying on or generally just right of the climb. For those who plan on climbing the entire line to NE or true summit of the mountain, the descent will be quick and easy, with a single rappel and then class 3 scrambling leading to Aasgard pass and then down along the peak to the base of the route where any stashed gear can easily be grabbed.

For more beta, check out MountainProject.com’s page on Dragons of Eden [LINK].