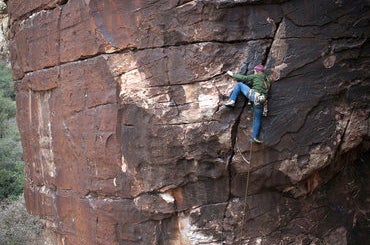 Icebox is the first of the major climbing canyons accessed via Red Rock’s one-way loop road. It’s also often overlooked by climbers, despite hosting excellent cragging and multipitch routes such as La Cierta Edad and Gotham City. Despite the excellent harder trad climbs on both sides of the wall, one of Icebox’s premier single-pitch lines is actually an inauspicious 5.9, easily overlooked next to testpieces like Spring Break. Mister Masters is 5.9 but climbs overhanging terrain via limestone-like jugs, horns, buckets, and bomber cracks. It is one of the steepest sub-5.10 pitches you’ll ever do, and rather than clipping bolts, the protection is all bomber natural gear. From atop the route, it’s easy to traverse left and throw a toprope on something six or eight letter grades harder, yet far less steep.