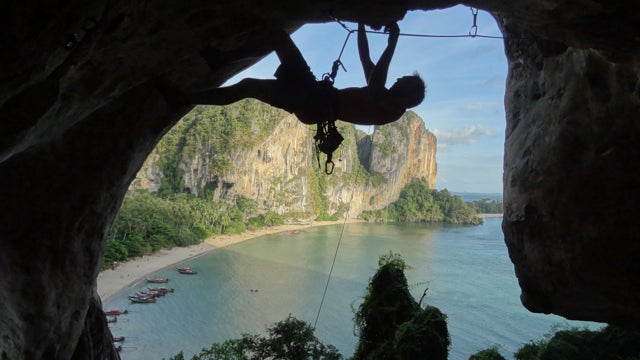 “Climbing in Thailand is paradise! Routes right off the beach, impeccable limestone, short approaches… and the nightlife and climbing scene. And everyone’s in such good shape!  Am I dreaming?!” —My journal entry from my first visit to Railey in 2003!

I was young and naïve, but I sure was stoked! Railey, or more accurately, the Pra-Nang Peninsula, is what everyone thinks of when they think of climbing in Thailand. On my first visit, I did what most climbers do: I rented a bungalow off the beach on Ton Sai, met lots of other climbers, climbed on their ropes and draws and even led my first 5.10—which incidentally led to my first real whipper. I drank Thai rum in buckets and started my days off with Thai Red Bull.

I’ve since been back to Railey three times, spending a combined three and half months there. And, as I have with other things I’ve put on a pedestal, I began to develop a more jaded view of that place I once coveted as paradise. The Railey scene started to get to me: the trash, the crowds at the crags, endlessly repeated reggae music, classic routes that haven’t yet been rebolted with titanium.

Thankfully, in 2009, my wife and I met Mike Weitzman. An American expat living in the Krabi Province, Mike had become disenchanted with the Railey climbing scene before I had even discovered it. So he started checking out the other climbing potential of southern Thailand’s vast, karst-laden landscape.

Mike and crew established lines outside of Railey, quickly developing the walls on the island of Koh Lao Liang. This island has no civilization and no permanent structures, just cool travelers to chill out with, fresh-caught seafood, and excellent climbing.

Chomp Phli (Spirit Mountain) is where you’ll most likely run into Mike. It’s his home crag and the love he has poured into the place is evident. If you’ve been to Railey, you’ve probably passed right by Chomp Phli on your way to Railey’s jumpoff point, Ao Nang. Chomp Phli’s main wall is less steep than Railey’s typically overhung lines, but the rock is great, the location is tranquil, and the climbing is technical.

One of Krabi’s newest crags, Naga, holds immense potential. There are only a handful of routes, and my wife and I were lucky enough to bolt a new one with Mike during our last visit. Other areas like Koh Yao Noi, Koh Phi Phi and many of the smaller island towers hold excellent climbing with the added adventure of climbing right out of the water, usually from a longtail boat or a kayak.

Don’t get me wrong, I don’t think Railey is played out. Every time I go back, I see newcomers’ excitement as they experience their climbing beach paradise for the first time. And the deep-water soloing is phenomenal and seemingly limitless. Titanium rebolting efforts by the Thaitanium Project [LINK] are safely re-opening classics for everyone to enjoy, too.

But that basic human need for new experiences compels us to forego familiar paths and long-established routes to follow a new track. In climbing, this can be by pushing our limits in our own climbing levels, exploring new climbing destinations, and—for a select,adventurous few—opening new climbing routes. And to those local heroes, like Mike, who continue to explore and open new areas and crags so we can all experience that feeling of exploration: Thank you!