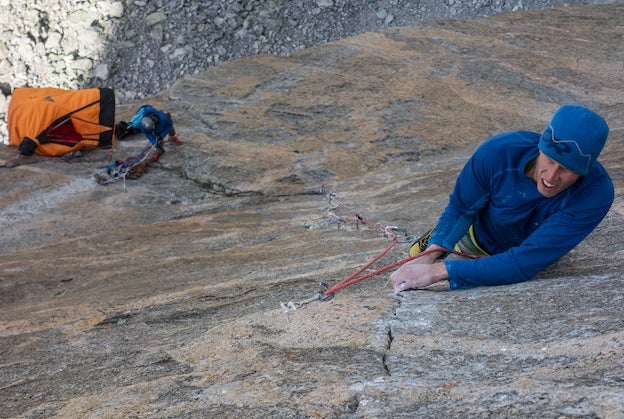 David Allfrey, Mason Earle and myself went to Mt. Hooker in Wyoming’s Wind River Range from August 8th to August 24th. The goal was to climb the most inspiring line on the face. We were not concerned about if it would go free or not. We wanted the king line!

After hiking in from Dickinson Park we began scoping the cliff and found what we believed was the most continuously blank and steep part of the wall. At this point we wanted to consult a topo, however, all of us had forgotten to print one off.

Over the next few days we aided and free climbed sections of the first 600 feet of wall. Dave did most of the aiding since it required A4 beaking and Dave is a BAWSE aid climber. We brought 15 beaks and Dave was using all of them on each pitch. After thinking we were on a new line and then finding a bolt many times over we used our phone-a-friend card.

After Dave spoke with his girlfriend over the phone, we found out that we were on Sendero Luminoso (VI 5.10 A4, Quinlan, 1980). When we heard this, we were all bummed but the free climbing was so good we where very happy to continue up the line. We bolted a two-pitch variation to the aid line on the third and fourth pitch. Dave led the third pitch at 5.12d and I led the fourth pitch at 5.12c. This climbing led up to a beautiful 5.11c corner.

After the corner was a breathtaking A3 seam that Dave aided like a champ. This became the crux pitch of the route: 5.14a, dubbed “The A3 Beauty.” The climbing was very steep and thin. Mason and I spent many days rehearsing this pitch and with a perfect weather window I was able to send.

Sending this pitch gave me more satisfaction than any pitch I have done before, with its aesthetics and rock quality in one of the most breathtaking settings. After completing the pitch, I also knew we would have a team send which felt terrific! Mason gave this pitch a great effort fighting some of the worst skin I have ever seen. His skin had more cracks than shattered glass. The next pitch was a 5.13a seam that Mason led with many equalized beaks as protection with a few cam placements. We then traversed into the flakes of the Shady Lady.

Later we aided the remainder to Sendero Luminoso. We hiked out with 80-pound haul bags all 20 miles in one day and we all agreed it was the most painful hike we all had ever done. We all said numerous times throughout our trip that Quinlan made an incredible solo first ascent of this route. It is a perfect line and his vision is extraordinary.     In all we freed the first seven pitches of Sendero Luminoso and then did one traverse pitch into Shady Lady. Then we aided a few pitches and freed the top part of Sendero Luminoso, which is probably the second ascent of that route.