On Display In Sochi 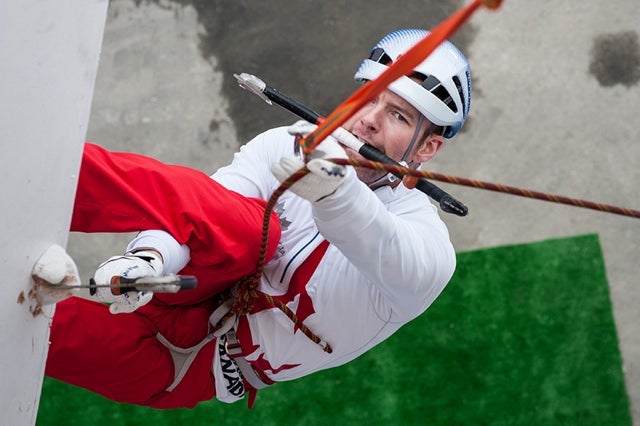 It’s hard to even begin this post, about the Sochi Olympics, because the entire experience has been such a whirlwind. For so many months, the preparation, the planning, leading up to the 2014 Olympics, to walk through the entry gates into the Olympic park and climb in front of the sporting world. There were no medals, and we weren't official “Olympic athletes,” but ice climbing was given a special chance, an opportunity to showcase how awesome the sport really is, and we were there, I was there, in the thick of it.

Everyday thousands of people would come in and out of our arena, watching, cheering, and even trying it out. We had three 60-foot walls of real ice climbing for the public to get on and swing ice tools. There was a lot of doubt, a lot of questions: How is this possible? What’s it going to look like? Is there really any point? But the crew pulled it off. Even when there were consecutive days of +25 degrees Celsius.  It was truly an amazing work of art. And if that wasn’t enough, a stage was set. A lead climbing structure for the athletes to demonstrate what it is that we actually do, how we compete, and to exhibit the gymnastic movement it entails.

Several years ago, talk of pushing ice climbing into the Olympics began to surface. Rumors were soon leaked, and before you knew it all the World Cup athletes were buzzing about the potential possibilities. But for numerous seasons, that’s all it was—talk. Until last year. Talk turned into discussion and from there, the buzz of ice climbing and the Olympics were turning heads. But still, no definitive answers.  And even up to the point of walking through the Olympic gates in Sochi, Russia, there was still a level of uncertainty. Many took the idea as something of a joke, that it wasn’t worth the effort. Some even shrugged it off as a waste of time. And to be honest, up until the point of seeing our actual venue, questions still hovered over me. It’s funny, my friend Marc Beverly, on many occasions kept telling me, “Dude, it’s the Russians. You just gotta keep faith. They’re not going to let us down." 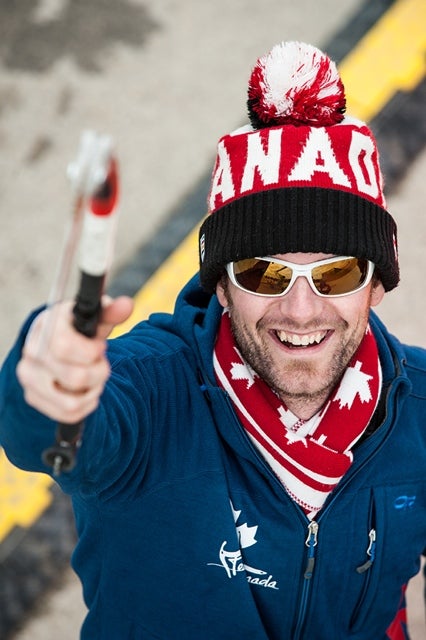 We had a simple job to do: wow the Olympic park. Whoever or however many, we had to leave an impression, so that any spectator, media source, IOC representative, any one who came to our venue would leave with a smile on their face, knowing that this was a sport to support. And let me tell you, they came by the hundreds. A sea of people would be lined up daily, for hours upon hours to try their hand at ice climbing. Some didn’t even understand what ice climbing actually was, but they knew by looking on that they just had to do it.
Suddenly I heard my name over the mic. I quickly jolted my head up, instantly shocked by what it was that I was about to do. There was a huge crowd in front of me, ready, cheering, clapping. I was about to tie in and climb in the Olympic park, to demonstrate the sport I love in front of, well, “the world.” All I could do was smile. Nine months ago I received an invitation to represent Canada at the Olympics, to climb and showcase our competitive sport. And there I was, about to do so.

To pull something like this off, I can’t even imagine the lengths to which certain “ambassadors” had to go to. And when it comes to the Russians, maybe it’s best that we don’t know. But the fact is, our Olympic family did it. Our job was clear: crush it. Show it off. Make it awesome. Ice climbing in tropic temps. Gymnastic movement. Vodka (Russians always have vodka on hand). Our Olympic family came together and made it happen. Day in and day out, we all played a part in making this dream a reality. Yes, it was sunny, and yes some days we may or may not have gotten a sunburn, but let me tell you, it wasn’t easy.  Some of the crew would spend all night packing ice shipped over from the hockey arena, and making sure the three ice walls were in tip top shape. Some athletes would belay all day and some would outfit harnesses, helmets, and ice boots all day. It was a team effort, and an amazing team effort at that. These people, whom I got to spend two weeks with, they will forever be remembered as game changers, a group of true ambassadors who took a risk and came through victoriously. I was honored to be a part of this movement.

There were ice walls and lead walls. Two perfect displays of what our competition world looks like. Every day, athletes from each discipline—speed climbing and technical lead climbing—would climb and showcase what our world looks like. From 9 a.m. to 8 p.m., there was no shortage of excitement. In fact, there was no shortage of excited people. So many questions, so much anticipation, and so many smiling faces, the energy was electric. It didn’t matter from what country, or what language was spoken, there was common ground–a simple facial gesture that was understood through any barrier.  When someone was smiling, we all knew what he or she was thinking: That this was awesome in every way. 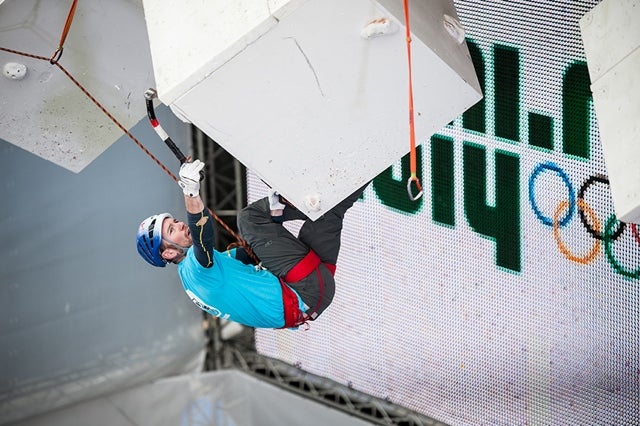 Daily, at any given time, broadcast stations would just show up wanting to cover the event. From countries spread across the planet, ice climbing was going to be on the evening news. And then the Korean Olympic committee turned up, and let me tell you, there was no shortage of hope from them. Out of everything they said to us, what stuck with all of us was when we heard the words, “We want this in 2018 as a medal sport.” (In 2018, Pheyongchang, Korea, will host the winter Olympics). Our jaws dropped. And remained dropped from there on in. There are more details about this, specifically about the process of induction, but best not say anything more about that as I don’t want to present any false ideas. But the IOC are fully aware of the impact our Olympic venue had, the excitement it drew, and that the rules are changing for induction. The face of the Olympics is adapting to new sports, fan favorites. Extreme sports are breaking down the walls of the Olympic rings. This year alone, the “extreme sports” (i.e., snowboard and ski halfpipe) drew some of the biggest crowds. Ice climbing is on the doorstep, and there is a lot of hope going toward 2018.

My experience in Sochi was memorable to say the least. Walking through the Olympic park and performing in the Olympic park, as a Canadian, a part of team Canada (alongside two other Canadians, Nathan Kutcher and Jen Olson), as an ambassador for competitive ice climbing. Yeah, this one I’ll never forget. Every moment, from attending hockey games, hanging out in the “Canada olympic house,” the crew of amazing people I shared this experience with. It was surreal (even our “wonderful accommodations”—for whoever is reading this who was there…I know you’re laughing right now).  Barriers were broken, bonds formed, and integral imprints were left.