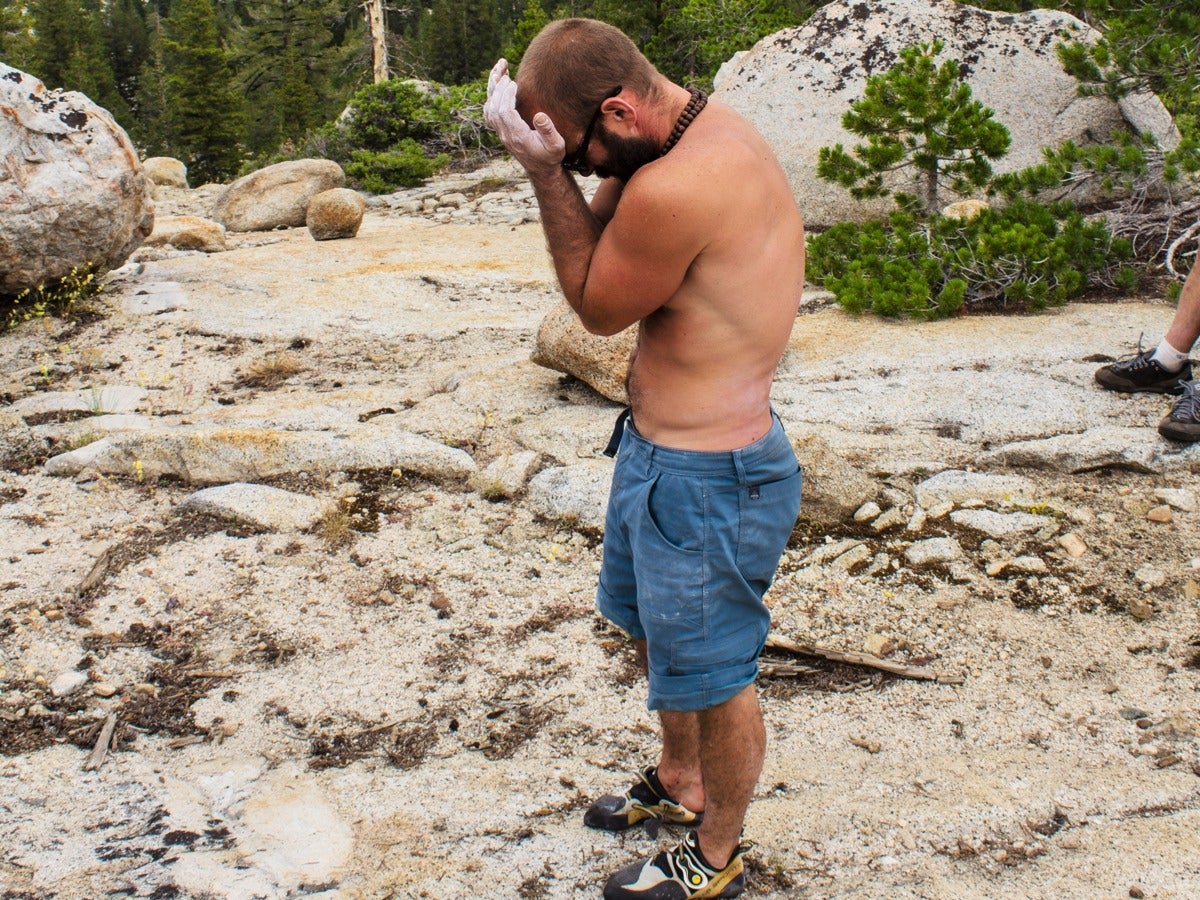 This story begins with my birth. Right there at the beginning. I imagine my parents pleased by my cherubial arrival, but I would never bet heavily on that. They’ve mentioned otherwise. I’m sure they’ve bandied about the notion of me sucking. Maybe parents slip these genes into our hereditary cocktail while we’re still bopping around in the belly, this notion of sucking. It might as well be a gene, because it will never go away; not with therapy, not with opening the chakras, not by bathing in patchouli and wearing open-toed sandals and dancing like a person tazered.

I’ve thought I’ve sucked, here and there, since waving at my mom in the hospital that first day of life. She surely heaved a sigh of relief, muttering, “Sweet Jesus, having a baby sucks.” Even when likely not entirely insufficient, I still reckon that I am. Is this just me? Am I the only self-suck cognizant? Of course not. All of us struggle with this powerful self-perception, most often when we undeniably suck for some reason. And even when we don’t suck at all, we still obstinately demand that we must, for whatever reason, suck.

What a curious thing. To say you suck when you’re totally aware that you don’t. Some employ this self-flagellation as a kind of chip-on-the-shoulder motivation to crush, while others buckle like bent lawn chairs beneath the pressure of their own negative reflections. In either case, you feel like you suck or at the very least you talk yourself into some dismal, apprehensive state of crumminess. So, you say, arms dallying about as if you were swatting marauding flies, “Gawd!  I suck!” And then sometimes you make a scene. Pitch a fit. Then you really start sucking, verifiably.

But I don’t want to talk about verifiable suckitude, because that is inevitable to the human condition. Yes, we get carried away and then we start sucking and then Dean from accounting taps on our cubicle and wonders aloud, “Hey, how can you manage all that sucking there in that tiny office space?” So, let’s breeze on by that. And by the way, screw Dean. Tapping on my cubicle?

Let me share with you an example of what I’m talking about. Two weekends ago a group of friends and I drove to Joe’s Valley, Utah, for a long bouldering weekend. The weather was fair, we didn’t drink too much and everybody ate some Butterfingers donuts from the Food Ranch. Things were going just swimmingly.

The bouldering was outstanding, as usual. The feel of Joe’s sandstone on your skin is both a physical and mental exfoliant to all that high alpine Colorado granite you’ve been hiking miles to climb all summer long. Joe’s is the shoulder season mecca, where you can shed your summer’s skin and begin fostering the fur coat you’ll need for the winter climbing months. Indeed, Joe’s is the Hueco of the West and I love it fiercely.

Joe’s or no Joe’s, though, I’m a self-critical guy. I dislike what I’ve already written, for example. Just plain loathe it. I’m also critical on the rock, but not as much, because my brain is off picking dandelions or scooping sand in an old tractor tire or looking at a daddy-long-legs through a magnifying lens. Climbing rocks is recess, and Joe’s an unrivaled playground. The brain and body amiably shake hands and skip off in different directions. Play time for both, but not in the same place. Some people would call this a ridiculous enterprise or, more hurtfully, a meaningless waste of time. But those blowhards are all wrong. It’s actually called bouldering and it remains the most meaningful waste of time I know.

As fun as Joe’s was, I couldn’t escape the suck creeping in. I wasn’t climbing particularly well, but I was holding my own and having fun. Yet, if I failed on a climb at my ceiling’s zenith, in the beginning of the weekend, I would mumble under my breath, “Ugh, I suck.” When, a day later, we went back to a particularly ambitious problem and my friend quickly sent it and I was stymied by the crux move, I declared louder and with more authority, “Holy crap, I suck!”

As you are wont to imagine, I “sucked” a lot during that trip to Joe’s.

Fast forward to tonight. I got off work early, packed the dog and pads into the car and drove to Flagstaff Mountain in Boulder, Colo. After warming up, I got on another problem at my ability’s ceiling and then I hit my head on that ceiling with a big old thud. I fell and tried again and fell again. I whispered a swear word to my dog. “I suck, buddy!” Hank, my pooch, gawked at me for a beat and then licked beneath his tail. An unmistakable message.

So, I went to a slightly easier problem and sent it first try, but shakily, really working for it. “I still suck,” I said. And then I put in some good attempts on my other project at Flagstaff, but still I whimpered quietly about my terrible ineptitude. I even kind of growled an affirmation of my sucking while a group of boulderers walked by, staring at me.

So, I drove home with no super wicked awesome sends, contemplating my many shortcomings. Why do I suck? I wondered. My brain answered, This is far too complicated a matter for you. The Family Guy will be on television in a couple hours. I told my brain to stop being such a cheeky little smart ass.

Let me tell you, really, I neither sucked in Joe’s nor did I suck at Flagstaff. I simply didn’t send everything I tried or everything I expected to send. I was climbing at my talent’s threshold and I even had a couple triumphs. I suffered many more failures. And yet everything—success or failure be damned—unceasingly felt easier and more doable, little by little, proving that sucking and success are fluid, one’s daily talent on the rock a moving target.

The question must be asked, Why does someone like me—and maybe like you, as well—too often focus on an aspect crucial to the sport, failure, rather than the process inherent in climbing: projecting, failure, failure, failure, success?

Reasons abound why we focus on our sucking, that’s for sure. Let me dazzle you with my profundity. Brace yourself for these three indubitable pillars of wisdom, stumbling blocks each.

We too often expect to climb something at the apex of our skills, ascending heroically through a thin wisp of adversity, but mostly just quickly and awesomely. When this does not come to fruition, we demand that we must suck. We must suck to not have promptly dispatched that problem. But that, my friends, is not the case. Failure is a part of crimpers and slopers and heel hooks. You slip, you fall, you split tips. You don’t send. You don’t send a little bit more. “Progression” is a three-syllable encapsulation of a much wider, slightly scarier, and always definitive truth: One must always suck, many times over and likely in public, before one ever achieves anything meaningful or substantial.

You have a friend crushing, or as Obe Carrion would have it, “squeezin’ juice out ‘da rock.” Your friend climbs in the zone, in the flow, and everything seems effortless. Meanwhile, you grundle and trundle and look like you’re trapped in seaweed. You think, I’m as strong as that guy! I must not be, though, because it’s obvious to everyone that I suck! The problem is neither strength nor ability, but rather one of two different variables. One, you really do suck and you have nothing to worry about, as we all flail hopelessly now and again. Two, you are a competitive and invidious little prick who wants to do things smoother, easier, and most of all faster than your friends. If the Crushing Friend truly bothers you, you might consider checkers. Electronic checkers against your computer. Give up climbing, please.

This is the real rub of it all. We all struggle to break through plateaus and smash through our own glass ceilings. For most dedicated climbers, this is a common occurrence, chasing the transitory success that keeps us coming back to the crags like one good, deep fairway drive keeps golfers coming back to the links.

One ceiling down, however, does not forestall a new ceiling’s construction immediately after a success delivered. This ain’t bowling. There is no perfect game. Think about this: Remember back to that project that you worked X number of months and finally sent? You were so stoked! You slapped hands and babbled like a street urchin and belayed your friends altruistically for the rest of the day. Wasn’t that awesome? Don’t you love that feeling of success after struggle, the splintering of a ceiling afforded by dedication, obsession, and the physical and mental marriage of the perfect skill set? Of course you do.

And that’s why we habitually recycle our ceilings. After we break one, we build another. And another. And another, ad infinitum. We’re addicted to the fight. But while we’re smashing the next ceiling to bits, one shard at a time, we think, Why do I suck?  Why can’t I do this?  Will my suckitude never abate?

Riddle me this. Do you believe Sharma never thinks, however briefly, he sucks after fuddling about on his newest 5.15b route in Margalef? Perhaps Alex Johnson doesn’t think she sucks, even for a split second, falling from a sphincter puckering highball at the Buttermilks? Do you think John Long, Lynn Hill, or any of those old Stonemasters didn’t dip their toes into the rancid pool of suckington?

Of course they did. We all suck when we’re smashing ceilings. No matter how strong the climber, they must contemplate the roiling abyss of the suck. V3, A2, WI7, 5.15c, it doesn’t matter. If we’re breathlessly banging on the rooftop of our abilities, we must struggle through the notion of sucking to ever finally not suck, fleeting as that triumph may be.

I guess the trick is to remember that we don’t, in actuality, suck. We’re just failing, methodically, in preparation for achievement. Isn’t that a pleasant way of looking at it? Maybe “sucking” is our brain’s way of saying, Listen, you little baby, you’re going to have to try, train and yearn harder. You’re going to have to write off this session, just like every climber in the history of climbing has had to do, and reassess your strategy. Maybe you’re just having a bad day. Maybe—and this might hurt—you’re being an over-competitive or vainglorious little butthole. Go home, have a beer, and watch The Family Guy. We’ll start again tomorrow with a clear head.

And what should we say to that, as climbers? I hate you, Judas Brain! No, just kidding. We should never say such a thing to our brains. We should say, Yeah, you’re probably right, Brain. Sucking outnumbers success, but it’s a battle of attrition. All it takes is one try, one good day, one wonderful suckless afternoon to clip the anchors.

But then, of course, after that we just suck again, and that’s kind of perfectly wonderful.