"You Ladies Out Here Climbing On Your Own?" 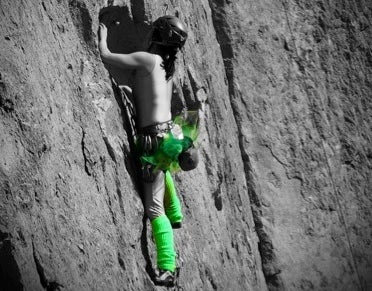 “Hey Tutus! Would you like us to leave a rope up for you over here?” A man’s voice shouted around the corner of the Buckets area.

“We’ll lead it if we climb the route.” Boys. Sometimes they think that we women don’t know our way on the rock or in the mountains without them.

It was a gorgeous spring morning just before St. Patrick’s Day at Smith Rock State Park. The sun was radiating off the walls, the Vitamin D soaking into our pale, Pacific Northwest bodies.

Eight ladies made the drive from Seattle and one flew from California to enjoy an all-ladies climbing trip. I try to organize one every several months. For us tomboys, it’s a completely different experience to climb with only other women: We set goals for ourselves and the rest of the team helps each other achieve these goals. And we have fun in an X-chromosome sort of way.

“Fairies on the wall! Fairies on the wall,” we all giddily chanted from our respective climbs, resembling fairies in our green homemade tutus and black or gold onesies underneath. Some ladies accessorized with matching green leg warmers, others with green sequin suspenders or sparkling green wings, flapping in the breeze. We looked ridiculous, but somehow, it was perfect. Everywhere we went, people shouted, “Hey, Tutus!” or “Wow, how many of you are there?!” or “What fun!” It was fun. And it helped us not take things too seriously.

I’ve been climbing for over a decade now and have always struggled with lead climbing. My head just hasn’t been there. I’ve had spurts where getting into a budding relationship with a guy who wasn’t already a climber had forced me to lead, but as soon as they got up to speed, I’d quickly recede back to my comfortable place as a follower. I’m perfectly comfortable pushing myself on hard routes, but even moderate routes on lead seem terrifying if I don’t lead every time I climb.

And there’s something about climbing with my guy friends that, even if they aren’t actually putting on the pressure to climb fast, climb hard, or get in a bunch of pitches, I’ve irrationally convinced myself that they won’t have the patience to let me work through my confidence issues to progress in my leading. I just never want to “hold them up.” Really, it probably has something to do with my own pride as a climber for over a decade where I fear exposing my weaknesses to other experienced climbers.

After talking with many other women, I realized I wasn’t alone. Many of us climbed with our boyfriends, husbands and other guy friends but seldom led the pitches for many of the same “fears.” So about five years ago, I started a local women’s climbing club. It was great! We got together about once every week in the summertime and each talked about our individual goals in climbing—some were new to leading and wanted to mock-lead or practice gear placements while others wanted to push their grade or speed or had a particular climb they wanted to be able to lead. Then, we headed to the crag and collectively helped one another achieve those goals. It was an environment where we felt safe exposing to other and overcoming our weaknesses as climbers.
We even had a Facebook group page before Facebook had group sites and all our guy friends were intrigued and jealous. But this club was all ours. The concept was really taking off and we all felt like we were making progress for ourselves rather than just trying to keep up.

Then two years ago, I remembered just how much I enjoyed climbing with other women. Especially multi-pitch or alpine climbing. It forced me to be more prepared and required more leadership and true partnership. It made the climbing experience whole. And it surprised me how different the other climbers interacted with us when we were an all-woman team. It was as if they felt morally obligated to help us out else there would be a good chance of an epic or a rescue. “Be careful up there…it’s steep,” said one man on Mt. Stuart. Or “Are you two ladies out here by yourself? Maybe we should climb with you…for uh…safety in numbers,” said another man on Mt. Rainier. Or “You climbing as a party of three?” when they didn’t see a man in our climbing party. “No, just us ladies. We’ll manage,” is always my favorite reply.
I realized how much I needed to start the ladies-only group up again. So last year, I did.

But this time, it needed to be more sustainable to work with busy schedules, so I’ve ended up organizing ladies’ trips at least twice a year and finding female climbing partners for my objectives whenever I can.
The Smith Chicks Rock Trip in March was a great success. Shelia led her first trad route outside (and just a month later swapped leads with me on Dark Shadows, a classic 5.8 at Red Rocks outside Las Vegas). Lynne led both trad and sport outside for the first time in a couple years. And Kjersti even led her first 5.12 outside! As for me, I got more practice leading trad routes at the start of the season and helped inch my lead head forward for another big, multi-month climbing trip with my husband. For once, I’ve started a climbing trip with him swinging leads!