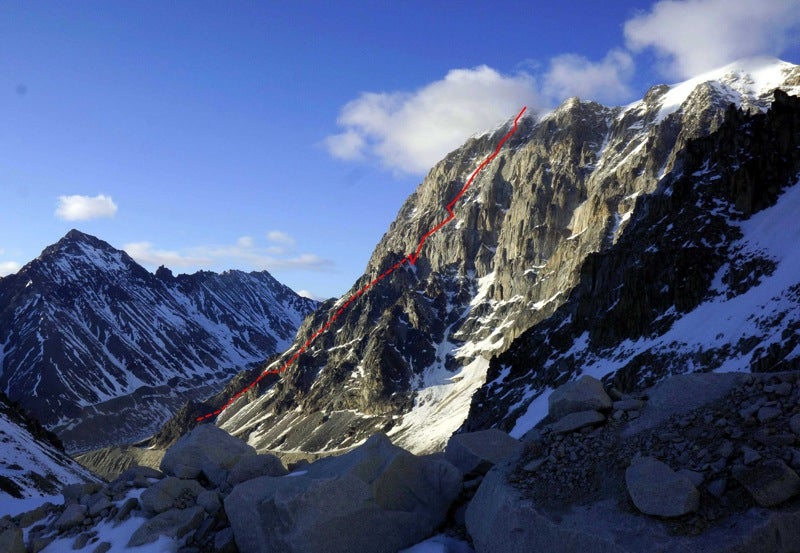 Clint Helander and I have just returned from the Revelations Mountains of Alaska where we made the first ascent of the West face of Titanic Peak (M6, 5.8, 50 degrees, 4,000 feet) in a 22.5-hour push from base camp. It was a very enjoyable climb in a rarely visited corner of the Revelations. Unfortunately the trip was cut short by an incident that necessitated an early departure.

The Revelations are a sub range of the greater Alaska Range, approximately 130 miles to the Southwest of Denali. It has been receiving much attention over the past seasons and a number of impressive ascents have been made in the area. This was Clint's seventh trip into the Revelations. He is considered the "godfather" of the range having written a profile of the range in the 2013 American Alpine Journal as well as having made many of the significant ascents before mentioned. This trip was a chance for him to mop up some more projects in the area. It was my second trip into the range having visited the Revelations Glacier last summer with Scott Bennett.

We flew in on April 17th and were dropped us off on a small valley glacier which is the Southern offshoot of the Northeast fork of the Big River Glacier. Base camp was set up in a protected location directly beneath the West Face of Jezebel Peak (9,650 feet).

On April 21st at 04:30 we set off from base camp under a gorgeous showing from the Aurora Borealis and made the 4km walk to base of the route. The route started with 1,700 feet of steep snow climbing that led us to a contact between the lower quality rock of the lower buttress and the gorgeous white granite of the upper. From here the climbing turned to high quality mixed climbing with beautiful chimney and corner cruxes. As the sun came up the route became drier and we rock climbed for 1,000 feet of granite that was at times impeccable and others total choss. 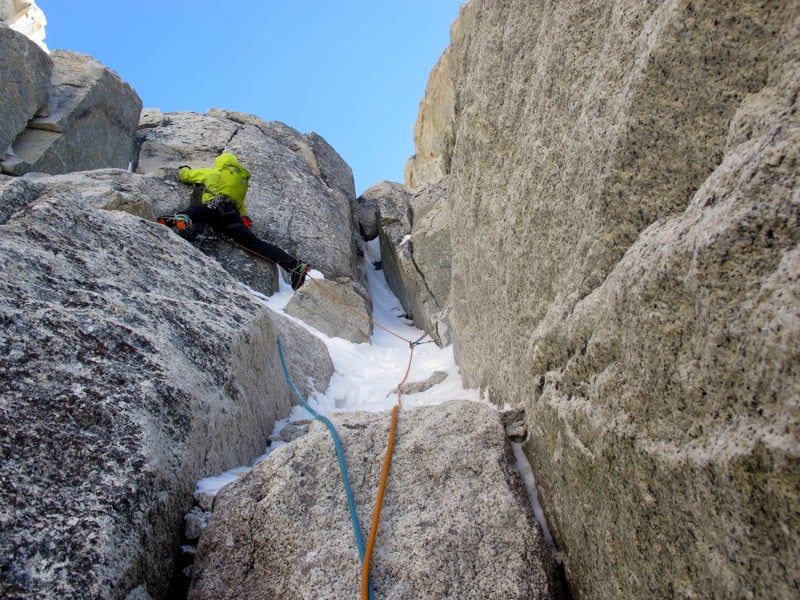 Reaching the summit snowfield we brewed up and hydrated before running to the summit. This was the second ascent of Titanic (9,300 feet) behind the 1981 ascent of the East Face by Fred Beckey and team. It was a gorgeous sunny afternoon.

From the summit we descended the North Ridge to the North margin of the East face rappelling and down climbing to the glacier below. From there we walked 8 km over a pass and down another glacier back to basecamp arriving at 2:00 a.m. on the 22nd.

After a few days of rest under variable skies we headed off to try another objective. After deciding the weather too poor we began the 3 km ski back to camp. While on this ski decent which we had made a number of times I took a fall into a hidden crevasse and twisted my right knee quite badly. After Clint extracted me we made our way back to basecamp and were able to fly out that afternoon so that could get back to Seattle for an MRI.

This trip was supported by the American Alpine Club's Copp-Dash Inspire Award, the New Zealand Alpine Club's Expedition Fund and the Mount Everest Foundation. Huge thanks to all these organizations for the support they provide us and the rest of the climbing community.