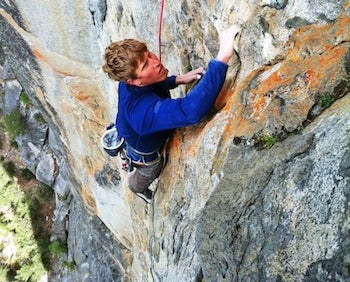 “Dude, this wall is closed for falcons,” James said as I was almost to the top of the second pitch on Dihedral Wall. I started laughing. Knowing James’ sense of humor, it was certainly a joke.  As I reached the anchor I yelled down “fixed.”  James said “really, its closed.” I sank into my harness, my head dropped, and then I said “f%$# my life.” My whole trip was based on this route, to see if it would be possible for me.  We rappelled to the ground and walked to the car. I contemplated just driving home or going to Index.  At the car, James suggested we go check out an aid route on Fifi Buttress (just west of the Leaning Tower) that might go free: Final Frontier, a Grade V 5.7 C3 put up in 1999.  We walked to the base and found fixed ropes to the last pitch.

This route was a savior and a gift for me. The next day, we started to put all our energy into this route with many hours of cleaning moss, weeds and sticks out of cracks and edges. Within a few days, James and I had figured out where the free climbing should go, how to do the moves, and where the bolts should go. A week of bad weather came in and we were forced to boulder and climb at Jailhouse, which is always a nice change from Yosemite. This worked out well anyway since we needed to wait for our bolts to be delivered.

Placing 16 bolts was no easy task on such a steep wall but this route was well worth the work involved. The first time I attempted to redpoint the route was the day after bolting the route and I felt sore and sluggish from the effort put in bolting.  I continually got spit off the upper crux corner until I needed to rest. I told James he should give it a top rope burn so he got up to the crux and used a loose hold that broke off and put a serious gash in his arm. We headed down to tend to his wound and my wounded ego. More bad weather followed, so I headed to Sacramento to spend some quality time with my nephew, sister, and mom.

After the storm, the temps had cooled off and the holds bit back into my fingers making the climbing feel easier. After some more rehearsing the route, James graciously agreed to belay me again. This time I felt fresh and snappy climbing the lower pitches.  At the first 5.12+ pitch, I climbed it more efficiently and was rewarded with being less pumped. The next pitch is the crux: a 5.13 face traverse. The climbing starts out with an insecure slab and then goes into powerful crimping. This pitch felt fairly cruiser and I was gaining confidence. The next pitch gave me butterflies with its extremely insecure upper boulder problem that forces you to smear on a water-polished slimy wall.

Starting up the corner, I felt great and reached the rest with a minimal pump in my arms. I took a deep breath and headed up the boulder problem only to fail matching again. After a good rest I headed up again and felt a bit more pumped but rested and focused on the climbing. I took a good breath again and matched the hold then rocked my body over a big foothold. All that was left was some pumpy trickery that I knew well from rehearsing this pitch. Soon I clipped the anchor and was filled with relief.  The next pitch was a 5.12 with one tricky move. It climbed much easier than I had thought and all that was left was a 5.10 and a 5.11a. Or so I thought.

As I started to climb I was hit with difficulty that I was not prepared for. I had cleaned the pitch a fair amount but never climbed on it. After falling on it once, I knew what to do so I lowered and fired the pitch at a grade of 5.11+. The top of this pitch is incredible with fin-like chicken heads that allow incredible face climbing with nauseating exposure.

After sending the final pitch, all the work and energy put into this route gave me an incredible feeling of accomplishment. Sometimes, even though you’re not able to climb on what you wanted, other options appear and offer an equally — if not more rewarding — experience.