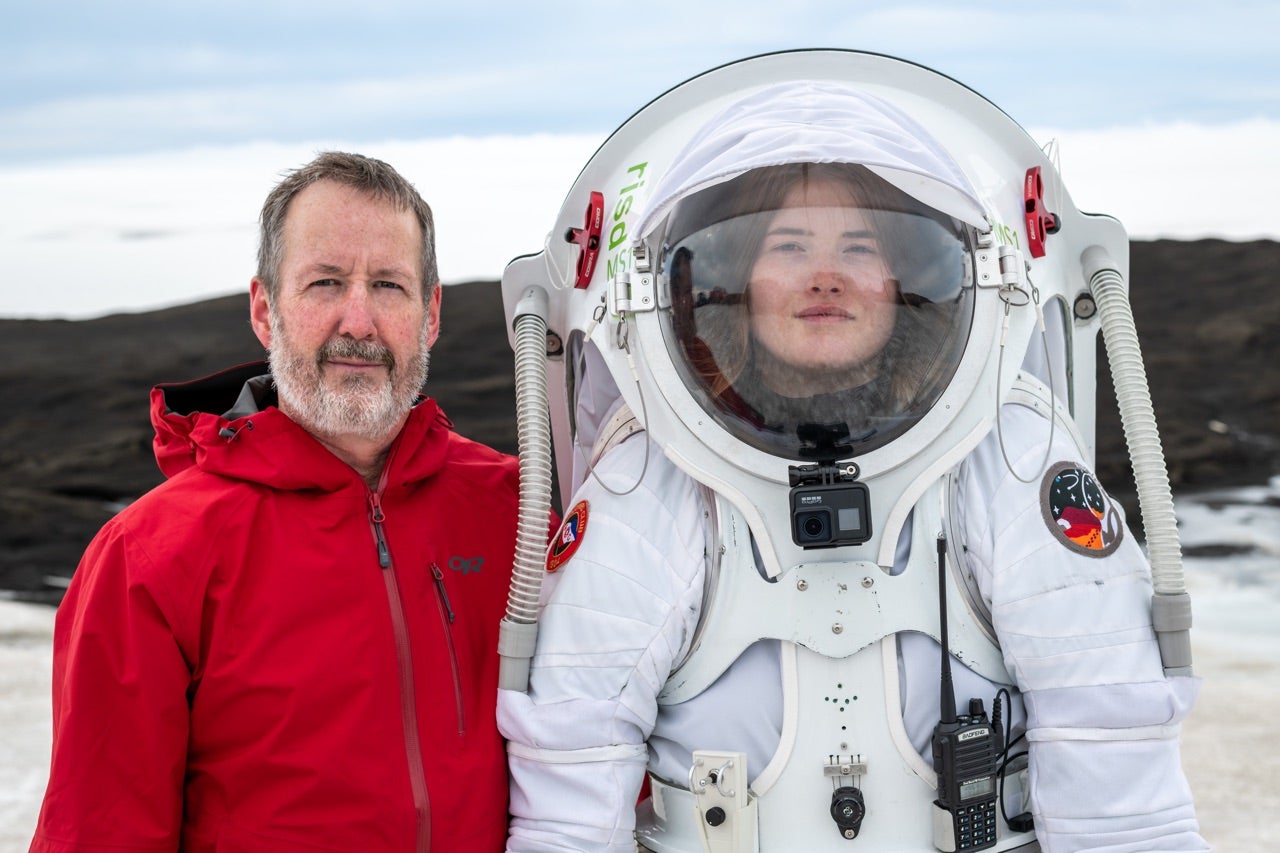 At Outdoor Research, we get along best with people who push the limits of the known, without letting harsh weather or terrain get in their way – and even better with people who seek these extremes out. That’s exactly how the Explorers Club member Dave Hodge pitched us on their project: A mission to one of the most severe, remote environments in the world to test the new MS1 spacesuit built to simulate Mars on Earth.

The Grímsvötn volcano in Iceland was selected as the best martian-like environment for the researcher’s tests. Exploring inside of the volcano and across the Vatnajökull ice cap, the team could replicate the terrain, geology, and relative isolation that they would experience on Mars. Frigid temperatures, snow, and black ash from the volcano were just a few of the qualities that stood out on this trip.

No stranger to extremes like these, the Explorers Club has been driven by the scientific exploration of land, sea, air, and space since 1904. With a roster of famous firsts like Sir Edmund Hillary and Tenzing Norgay’s first ascent of Mt. Everest, and Neil Armstrong’s first steps on the moon, the Explorers Club seeks out the unknown in some of the most unlikely places.

This mission was an Explorers Club’s flag expedition, which means it fit very specific criteria for being a “contribution to exploration, science, research, and conservation,” according to Dave, who is a Co-founder of the Iceland Space Agency and photographer of the team’s journey in addition to being an Explorers Club member. It was Dave’s first time carrying the official club flag #60, which has been planted around the world on similar expeditions since 1984.

“I felt the weight and responsibility of it, because it’s such a historic thing,” Dave explained. “So many great explorers, scientists, researchers have carried this exact flag... It pushes a little on the subconscious to make it special. I think we did that on this trip.”

Because there was only one suit, we knew that the rest of the team would need durably warm, weather protective gear to withstand this terrestrial environment. So we loaded them up with our Alpine Down Hooded Jackets as well as an array of Alpine Gloves, and sent them off on their 10-day journey to discover the undiscovered, and push their own limits along the way. 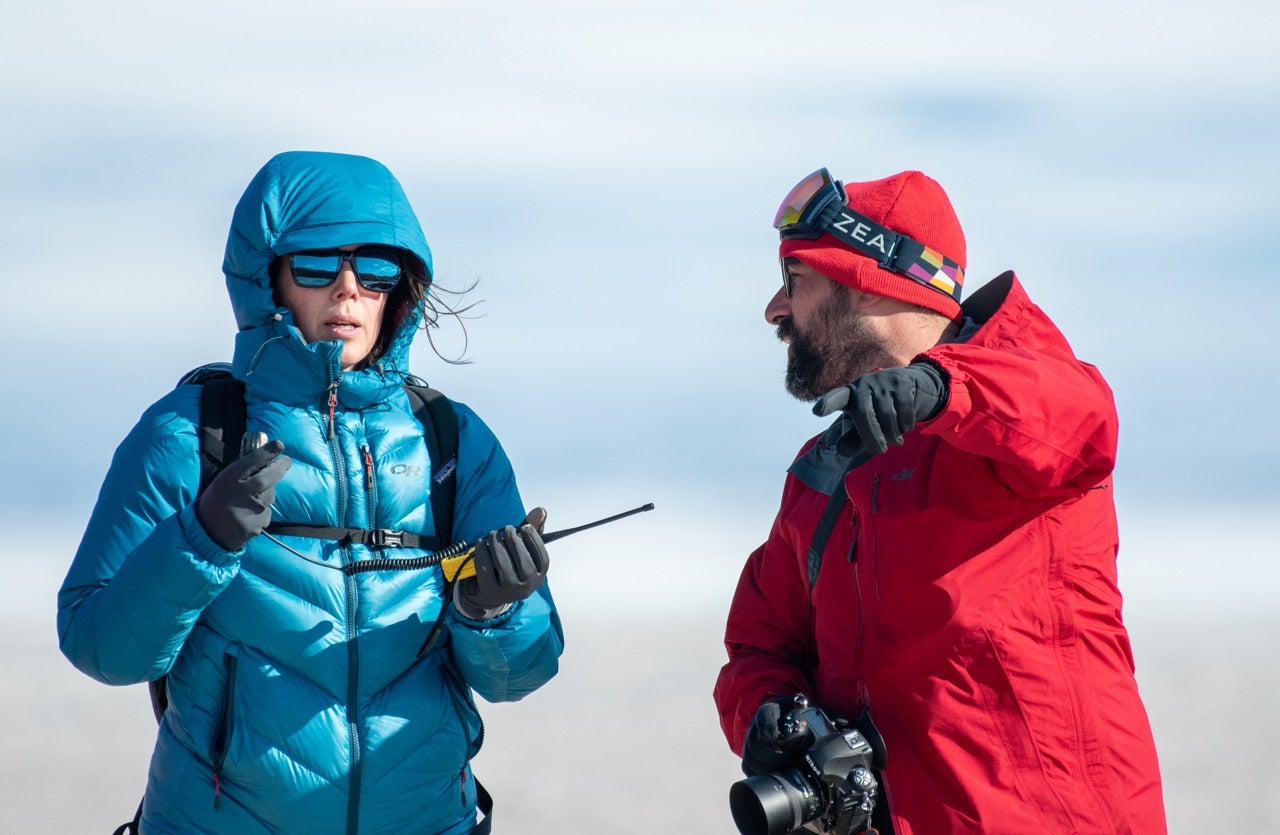 RELATED: The Case for Galactic Parks on Mars

Michael Lye, lead designer of the MS1 spacesuit, was on-site to ensure it fit and functioned properly for everyone who was part of the testing process. Michael is Senior Critic in Industrial Design at the Rhode Island School of Design, who’s been teaching for 20 years and working with NASA on spacesuits for 15 years. A huge focus of his work at RISD has been making kitchen layouts safer and more straightforward for people who otherwise might have trouble.

Believe it or not, Michael says that designing a kitchen and designing a space suit aren’t too different from one another. Elderly people operating a kitchen and astronauts both may experience stiffer joints (like limited mobility from a rigid suit), worsening eyesight (which shares the feeling of bulky goggles and minimized peripheral vision), and a loss of dexterity in hands (due to the necessity of protective overmitts). The details are different, but Michael addresses both the same: By making these unfriendly environments accessible for all.

In the same way that a mountaineer needs to protect themselves from harsh alpine environment, Michael’s space suit lets people adapt to an environment that humans can’t survive in on their own. His whole goal is to make people’s experience in space less extreme.

“It’s not just about your body preventing you from doing things – it’s about how you think,” explains Michael. “When you have good equipment to go mountaineering, it’s one less thing to worry about and lets you focus on things that are less critical... In analog space missions, we’re trying to alleviate some of the stress our team might have on a Mars mission.” Bottom line: When astronauts don’t have to worry about what they’re wearing, they can focus on their research and deliver more accurate results.

Whether it’s testing a spacesuit for Mars or testing your physical capabilities on a climbing, skiing, or mountaineering trip, we applaud the Explorers Club’s drive to seek out extremes and always question what’s possible.