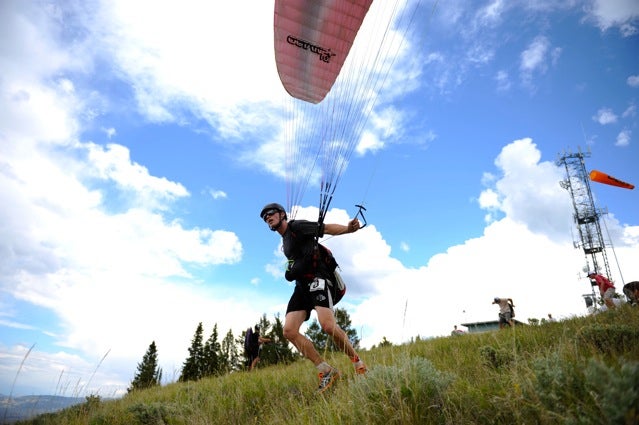 The Outerlocal Summer Games—Jackson, Wyoming’s mountain biking, bouldering, mountain running and paragliding festival—began in 2012 on Jackson’s Snow King Mountain as a celebration of the adventure lifestyle. The first Games, which were instantly dubbed “a quintessential Jackson Hole event,” featured more than 500 participants and ended with two free, all-ages outdoor concerts, presented by JacksonHoleLive!, in the adjacent Snow King Ballfield. By the time the headlining act, BoomChick, took the field, more than 2,000 people had gathered at the base of the mountain.

The Second Annual Games, which is again being presented by Outdoor Research on June 29, 2013, again at Snow King Mountain, is shaping up to be an even bigger show.

The 2013 Games will feature a day of running, bouldering, mountain biking and paragliding. Participants can compete in one or more legs, in Pro, Rec or Masters divisions; teams can consist of all male, all female, or a mix of competitors, and comprise 2, 3 or 4 members. Mountain demos from participating companies, non-profit expos from local and national nonprofit organizations, and free clinics from athletes and ambassadors will run all day in Phil Baux Park at the base of Snow King.

In addition to more than $15,000 in prizes, competitors in the Bouldering Leg will vie for an All Access Ticket + $250 in cash to the International Climbers’ Festival in Lander, Wyoming.

Sweetening the pot, the Jackson Hole winners of the Running, Mountain Biking and Paragliding legs will receive an all-expenses paid trip to Jackson’s sister city of Lienz, Austria, to compete in the 2013 Red Bull Dolomitenmann.

The Red Bull Dolomitenmann features a cash prize of $10,000.

DJ Steiner will provide the Games’ soundtrack from the top of the Boxcar Boulder in the Teton Boulder Park. And when the sun goes down, the free, all-ages concerts at the Snow King Baseball Diamond kick in. JacksonHoleLive! will open the evening with local favorites The Flannel Attractions, followed, at 7, by  2013’s headlining act: Lukas Nelson & Promise of the Real.

“Outdoor Research is stoked to be a part of the Summer Games again this year,” said Christian Folk, Outdoor Research’s Grassroots Marketing Manager. “The combination of sports that make up this event really speaks to our customer, and we want to make sure to support our core community.”

Registration for the OLSG is $25 per leg, or $100 for teams, plus a $5 Snow King Mountain day-use fee. Participants may go to http://outerlocalsummergames.athlete360.com/ to register.