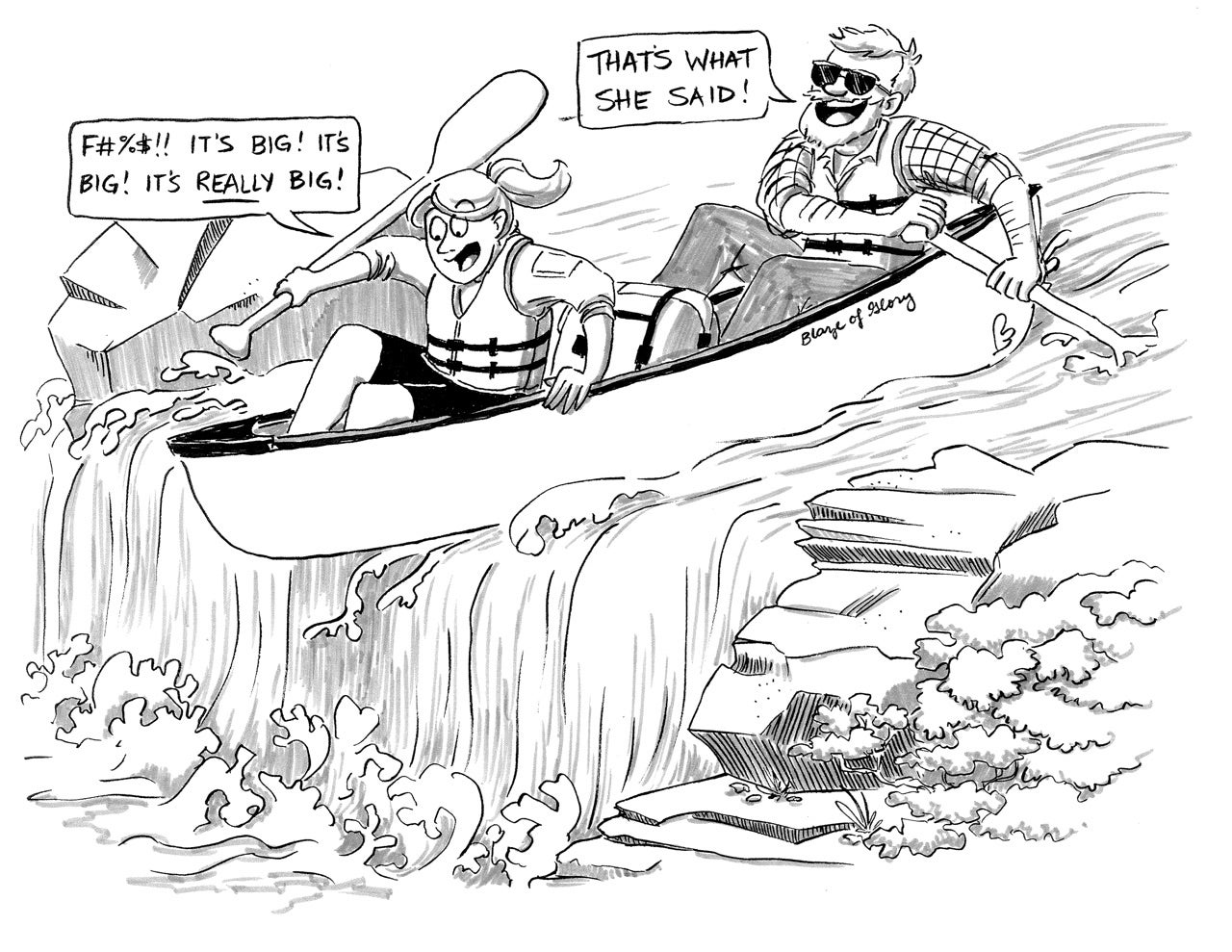 My mom always told me that I should never say yes to anything a stranger proposed to me in a bar. And as the front of our canoe plunged over a massive limestone ledge and my profanity-laden holler about the size of the drop was met with a gleeful “THAT’S WHAT SHE SAID!” from my paddling partner, I wondered if my mom might be right.

I met Steve last winter at a first-responder course, where we bonded due to our shared histories of terrible-but-awesome backcountry shenanigans and gruesome rugby injuries. Two weeks into the class we got together at Burt’s, our favorite local dive bar, to “study.” Over the first beer we compared scars; over the second I told him how I solo hiked the Long Trail through flash floods and freak snowstorms; and over the third he told me how he had paddled the Mississippi, Hudson, and Connecticut Rivers—and that he was looking for a partner for the Delaware River. I woke up the next day with a raging hangover and “GET IN A BOAT WITH STEVE” written in my planner over the entire month of May. 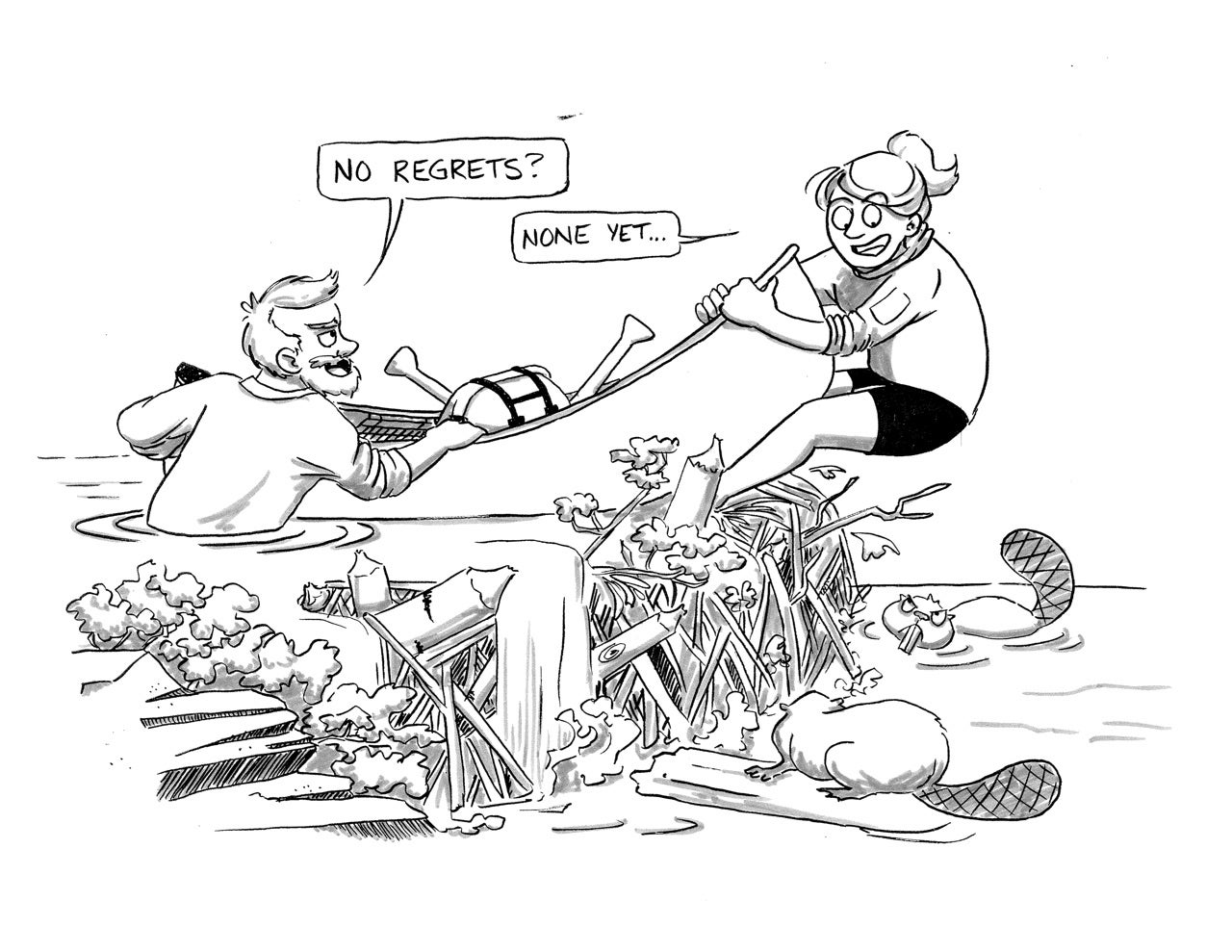 I’ve never backed down from a drunk promise, so on April 28th I hopped into the front of an 18-foot kevlar Wenonah prepared to canoe the Delaware River from source to sea—about 420 miles in all, with a guy I’d known for less than five months. I figured if he was dumb enough to ask, I could be dumb enough to say yes.

We opted to put in as close to the true headwaters of the upper branches of the Delaware as physically possible and then paddle all the way into the Delaware Bay so we could truly say we canoed “the whole thing”. We even tacked on an additional 70 miles to finish in Baltimore, because … well, we don’t have a good reason other than it sounded cool to end in a major urban area. 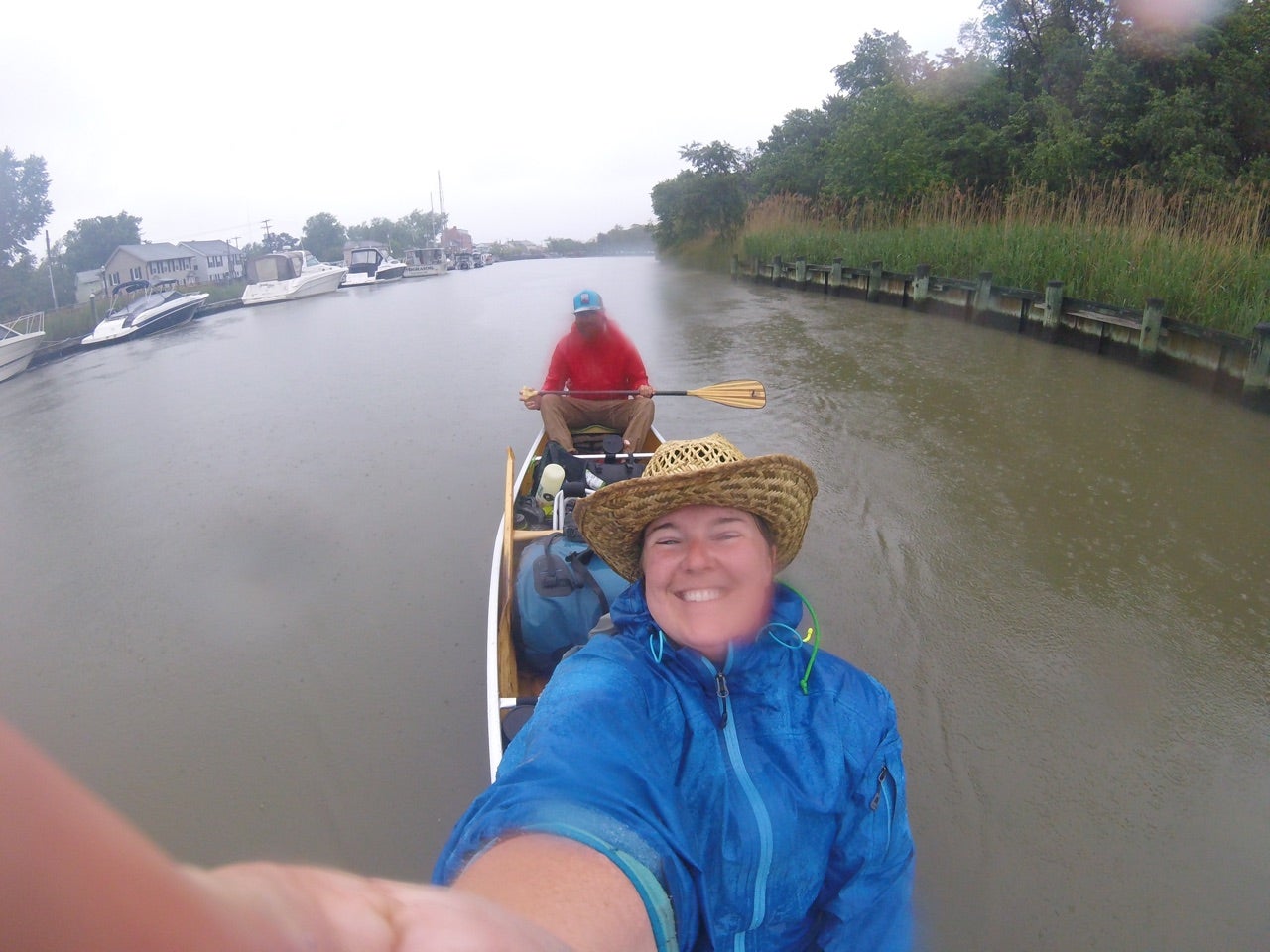 And, my mom was right. The trip, as a whole, was absolutely miserable. But, fortunately, it turns out that Steve and I are both masochistic morons and we loved every minute of it. Within the first hour on the water we were almost decapitated by a string of barbed wire strung across the river. Our first two weeks navigating the East and West Branch were spent in a grueling cycle of paddle, run aground, walk the boat, paddle, hit a swamp, wade chest-deep through a beaver pond, haul the boat over the dam, paddle, hit a strainer, portage, repeat. On the very first day we were brutally sunburned while loading the boat in the parking lot on the very first day, but after that the weather turned and we slogged through swamps in pouring rain and temperatures in the low forties. We were snowed on, hailed on, sleeted on, and got to chase our gear across a field during a small tornado. Every person we described our trip to asked if we were “out of [your] damn minds,” which never failed to set us cackling maniacally. The morning after a particularly gnarly thunderstorm we woke to find the river four feet higher than the day before, so we hitched into town to zero at the library. We got a lift from the pastor of a church bearing a sign promising “A 100% Chance of Death,” which we gleefully adopted this as our motto.

After 150 miles of soggy, half-frozen drudgery punctuated by large cups of black coffee in various upstate New York diners, the East and West Branches of the Delaware came together. We celebrated with a bottle of Old Crow and a pile of diner breakfast sandwiches, then awoke the next day to severe hangovers and… sunshine. Our first day on the Delaware proper was spent sitting in the boat getting outpaced by ducks as we replenished our vitamin D stores and did the bare minimum of paddling. It was glorious. It was warm. It was scenic and lovely and everything a rational person would hope for on a canoe trip.

We made it about four hours before we got bored. Fortunately, the Upper Delaware has some glorious rapids, so what we lacked in torrential downpour we made up for by crashing through the whitecaps. We managed to keep ourselves respectably drenched for the handful of days that we had sunny weather.

Our relaxing streak didn’t last long, though. When most people paddle the Delaware, they stick to the section between Hancock, N.Y., and Trenton, N.J. Above Hancock, the upper branches are thready and wild; below Trenton, it’s tidal. You’re sharing the channel with shipping vessels, jet skis and a good amount of trash while fighting the current half the day. Our leisurely afternoons spiked with rapids gave way to an unending slog against the tide. The rain returned. Steve got food poisoning. While I plied him with saltines and soup, we joked about how he’d pitched this trip in the bar as a “romantic beach vacation.” It just happened that we were lying in the sand on the edge of a landfill, waiting for the tide to come in and watching the smoke rise from the stacks of the DuPont factory across the river while he dry heaved. 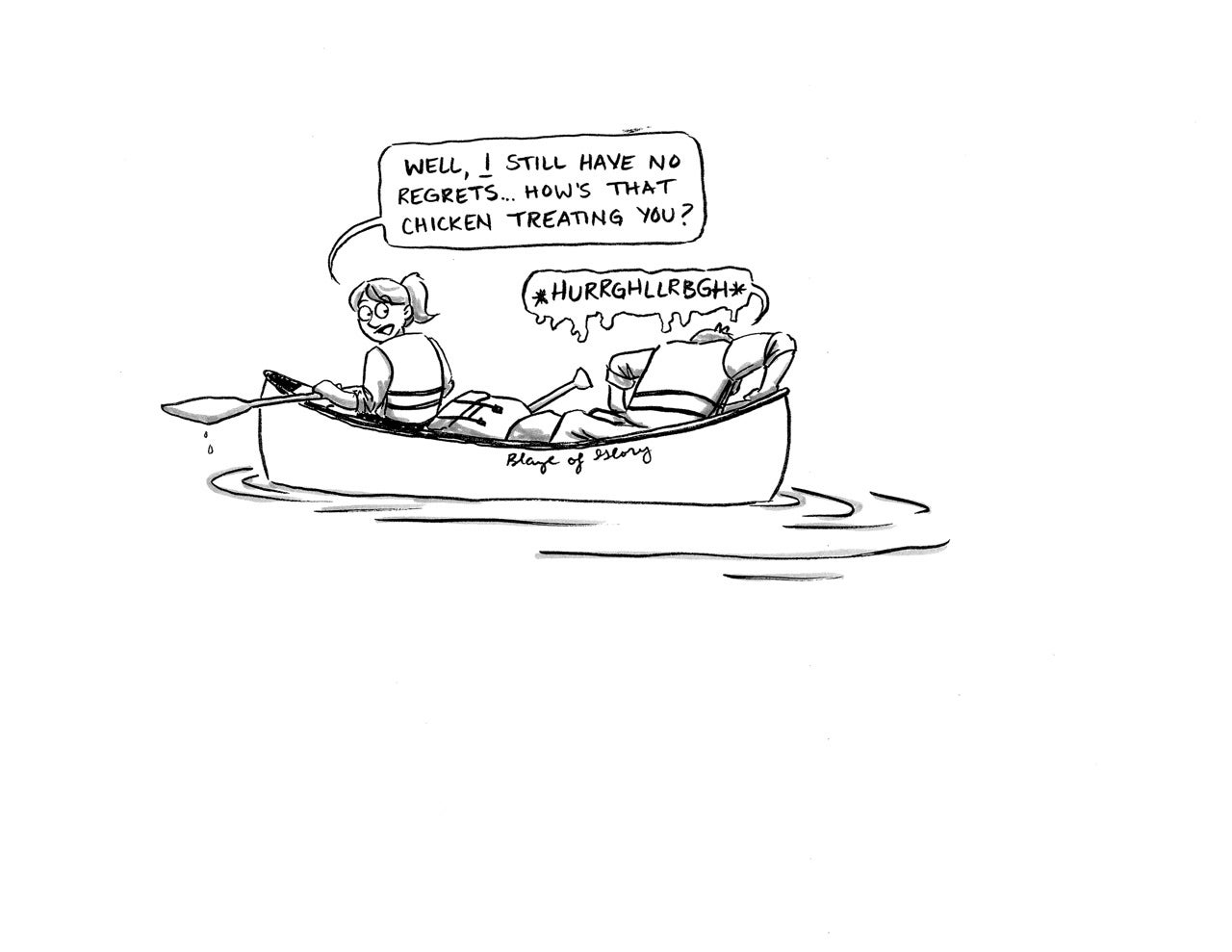 I continued to assert that I had no regrets, despite having to regularly reassure my mom that we weren’t dead (yet).

Illness and the tides forced us to paddle through Philadelphia well after dark in order to make a safe landing with friends south of the city.  I would never recommend this, but I can easily say it was one of the most delightfully surreal experiences of my life. It was an utterly windless night, with a glassy smooth river reflecting all the lights of 1.5 million people going about their business with no idea that two hooligans in a canoe were slipping by in the darkness. We joked that maybe we had died in the rapids and were now doomed to be a ghost ship forever paddling the waters of the Delaware, never destined to arrive at a safe harbor but eternally fighting the current, and that the wealthy owners of the yachts in the marina would be haunted by our laughter in the wee hours of windless nights. We re-entered the land of the living when we paddled into the yard of one of my old rugby coaches after almost 16 hours (and nearly forty miles) on the water. He handed us cold beers before turning the hose on us. 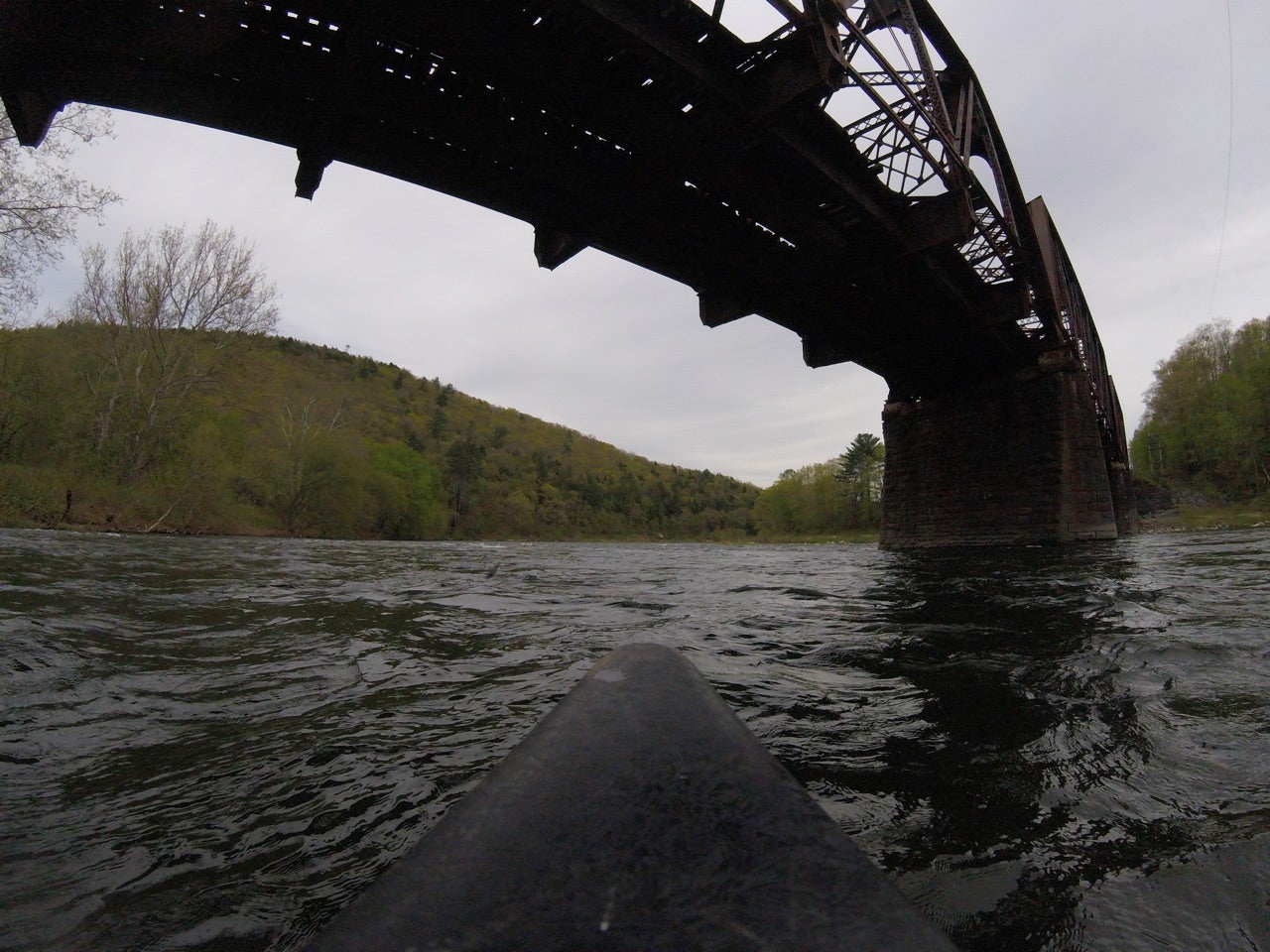 The final days continued to enslave us to the tides. We’d get up early to shake the sand out of our gear before our tent was swamped by the rising water, then paddle frantically to gain as much mileage as possible, get stranded for four to six hours, and then paddle into the night until either the wind picked up or we were too exhausted to see straight. Dogged by a never-ending drizzle of cold rain, we finally hauled our boat into the D&C Canal and left the Delaware Bay behind. We crossed the border into Maryland and feasted on fresh crabs and Yuengling while telling horror stories of our adventure to the locals. Camped in a “rustic cabin” with a full-sized fridge and running water at a state park just off the bay, we reveled in having an actual mattress to sleep on before making the harrowing journey across the open waters of the Chesapeake Bay into the explosives-laden territory of the Aberdeen Proving Ground.

Since no pleasant experience lasts long for us, this was the point when I woke up with such severe tonsillitis that I could barely breathe. Steve peered into my throat with a headlamp and made a series of increasingly concerned faces before coaxing me into gargling Listerine and taking one of every variety of painkiller we had in the first aid kit. Somehow paddling across open ocean into a military weapons testing facility was less intimidating than the idea of trying to get to a hospital with 200 lbs of gear, an 18-foot canoe, and minimal health insurance. So I downed a couple shots of scotch and demanded that we continue. 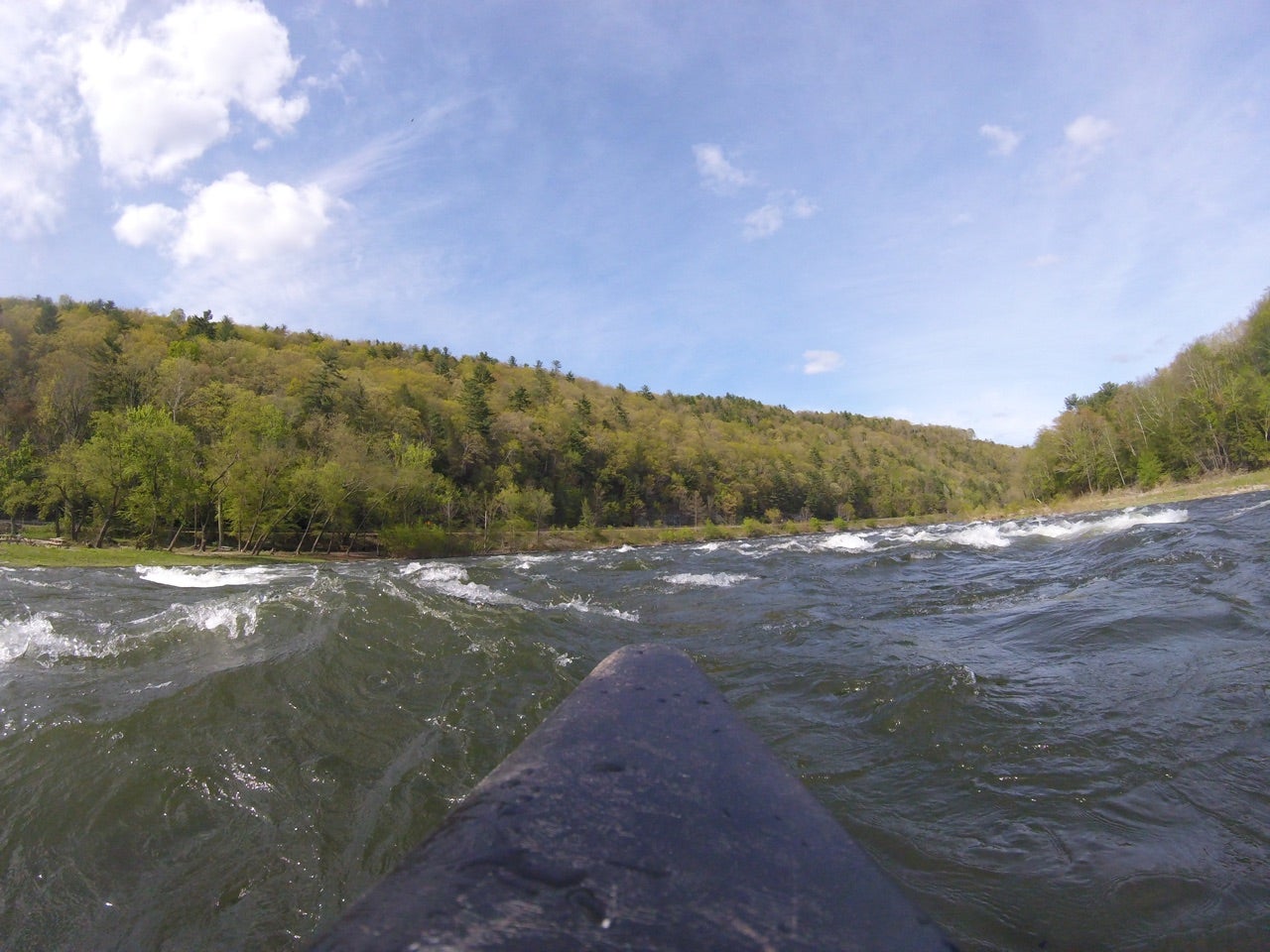 After a miserable slog across the bay, we kept as close to the shore as possible to avoid the worst of the waves while being wary of the “DANGER: UNEXPLODED ORDNANCE” billboards posted every hundred yards. We dodged a few suspicious unmarked buoys and jumped out of our skin with every explosion we heard just beyond the first line of trees. The waters were abandoned; we nervously joked that they couldn’t possibly be firing over the Chesapeake Bay because that would be wildly dangerous for passing boaters. I lost any lingering shreds of my dignity when I peed in our bailing bucket since Steve refused to put to shore. We even got “pulled over” by an Army vessel, flashing lights and all, whose occupants were horrified that we had made it through the security perimeter. Turns out they DO fire over the bay. They thought we were swamp weeds.

The final night of the trip was at a beautiful beachside tent site on the one island we could find that wasn’t riddled with explosives. We watched the sunset with our toes in the water while Steve sipped scotch and I gargled more Listerine. Nothing will help you appreciate the beauty of nature like 10 hours of paddling into a headwind while battling a 101-degree fever and avoiding being shot at by the United States military. 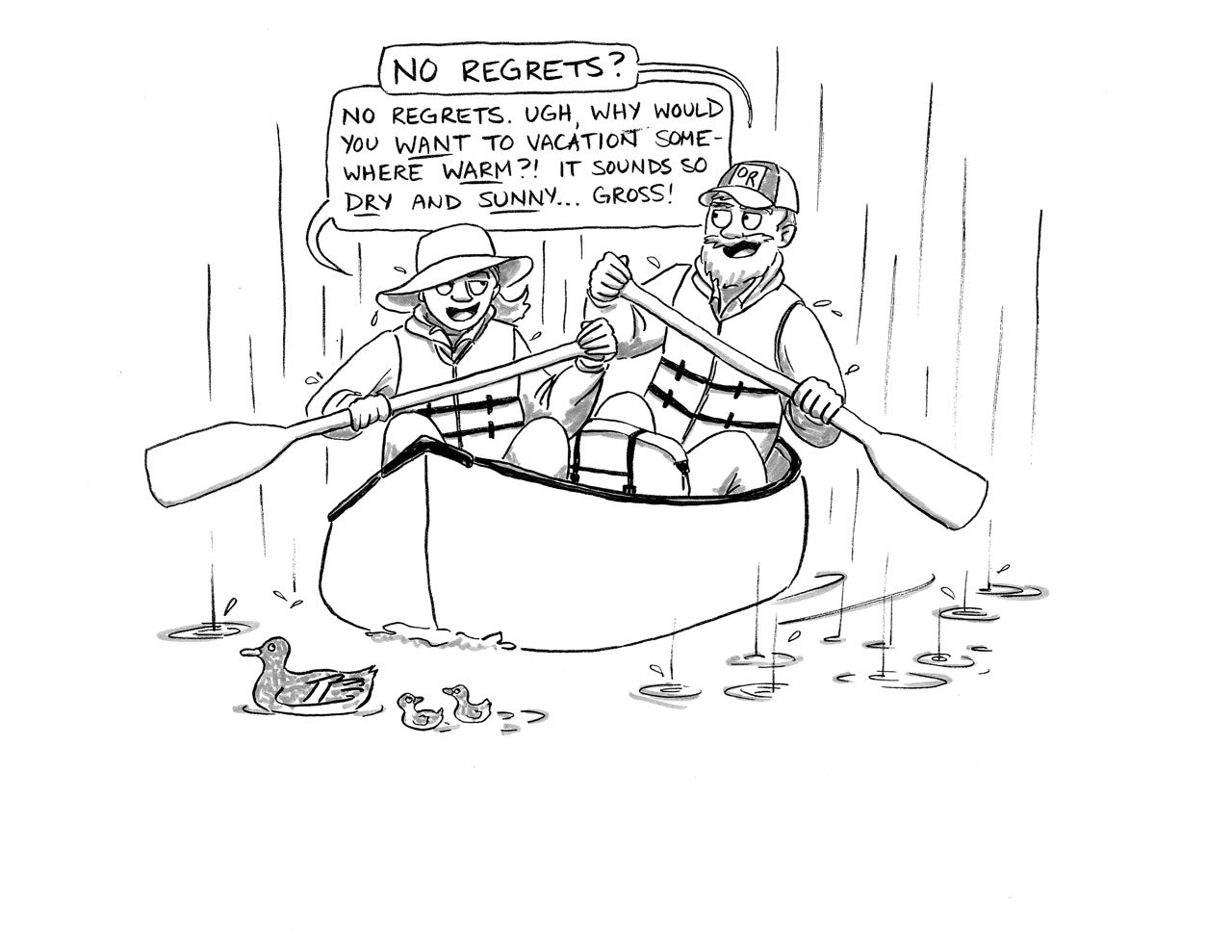 We woke up on the final morning to the ocean lapping at the front of the tent and a drizzle of rain. We piled our sand-ridden gear into the boat and forced our way into the surf. High winds made for a harrowing paddle to the mainland. Less than three miles into the day, I was doing more bailing than paddling and the swells were over our heads; we were forced to admit defeat and pulled ashore on the lawn of the first house we found within Baltimore city limits. While it would have been nice to drink our celebratory scotch on a dock in central Baltimore surrounded by yachts and ocean-faring vessels, this ending seemed more in keeping with the style of the trip. We sat on our portage packs at the end of a stranger’s driveway, passing the bottle back and forth, shaking sand out of our hair, listing all the times we should have died but didn’t.

After a long drive back to Vermont contemplating the grim reality of returning to our respective offices, we decided to cap the trip with a beer at Burt’s, which was where the whole thing started. With the canoe still on the roof rack and our clothes still shedding sand, we sauntered proudly into the bar. The bartender asked how the trip had been; we grinned and launched into our slew of horror stories. By the end of the first round, our drinking companions were telling us we’re out of our damn minds and we’d committed to another expedition.

Sorry, Mom. I’m sure your advice is good, but I guess I still haven’t learned to follow it.