PHOTOS: A Summer In The Pakistani Karakoram 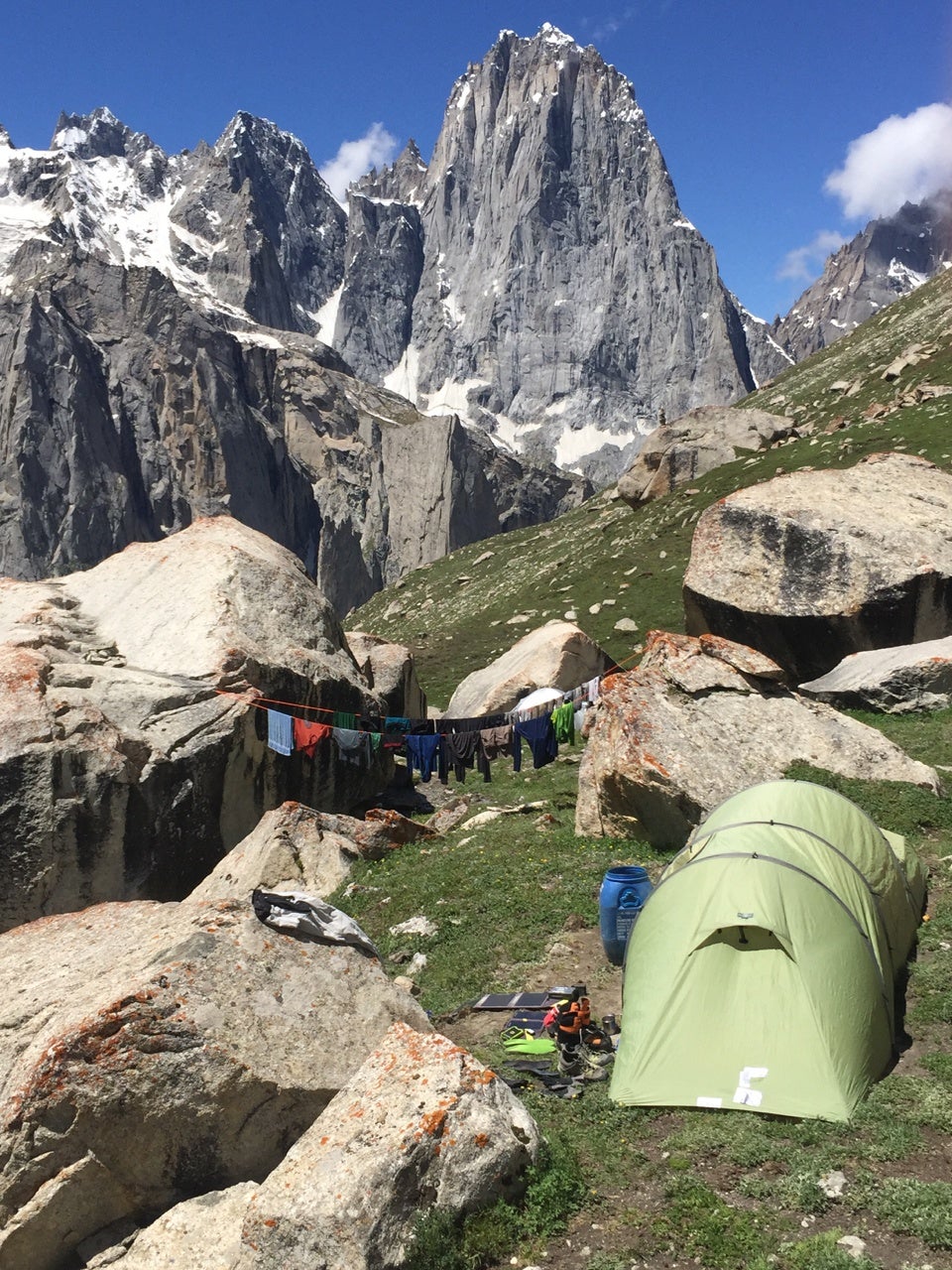 This summer, Graham Zimmerman, Scott Bennett and Steve Swenson spent six weeks in the Pakistani Karakoram, making the first ascent of Changi Tower. Graham and Scott also climbed a new route on K6 West, a 7,040-meter peak that had only been climbed once before. In the mean time, they put up a circuit of boulder problems around their basecamp. Here are a few of Graham's photos from the trip.

"This is my tent situated on the edge of our basecamp in the beautiful Nangmah Valley, deep in the Pakistani Karakoram where I traveled this summer to climb mountains with two of my dearest pals, Steve Swenson and Scott Bennett. The story starts with the long journey to this place, which started on July 1st of 2015 when I left my home in Bend, Oregon, with my trusty old Subaru loaded to the brim with expedition equipment and ended on the 10th when we rolled into our 15,000’ basecamp under a freezing rain with 44 wet and grumpy porters in tow. It was 10 days of hard work moving gear, utilizing planes, trucks, jeeps and man power.

We were psyched to finally arrive in basecamp and were particularly psyched when, after two days of digging into the hillside to make tent platforms, the sun came out and we were able to rest and acclimatize while looking at the amazing peaks around us. The beautiful peak in the background (down valley to the south) is Shingu Charpa (5800m)." 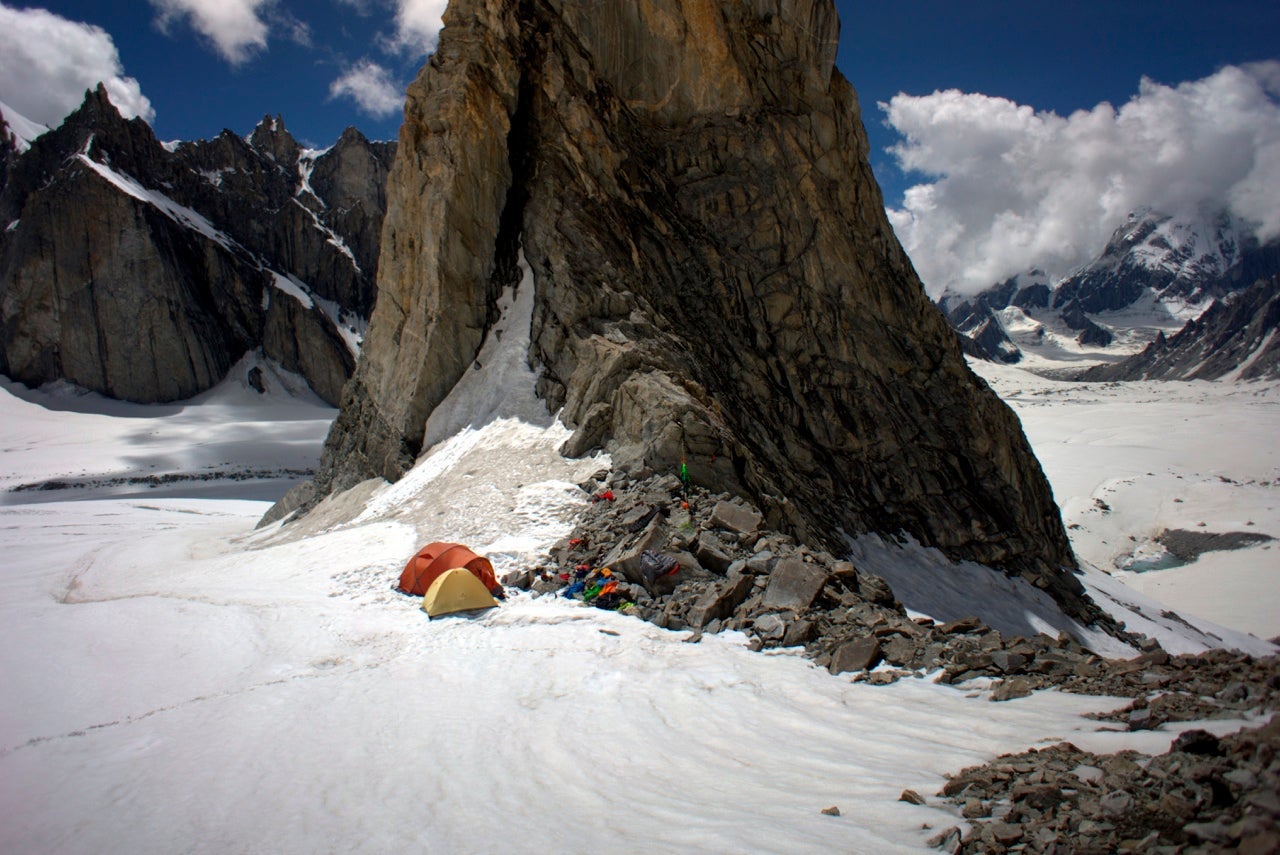 "Once we finally made it to basecamp,our first challenges were to get acclimatized and set up our advanced basecamp (ABC). The two objectives which we had originally planned to climb were the North Ridge of unclimbed Changi Tower (6500m) and the unclimbed Central Buttress of the South face of K6, leading directly to the unclimbed Central Summit (7100m). Both of these objectives were on the far side of the technical 5400m ‘Hidden Col’ from basecamp, so we decided that setting up an ABC on the far side of this Col would be a good idea.

This process of moving gear and food to the ABC took almost 2 weeks of shuttling, recovering, acclimatizing and dealing with bad weather. But by the last week in July we were in position to finally start our last acclimatization missions and maybe even start climbing." 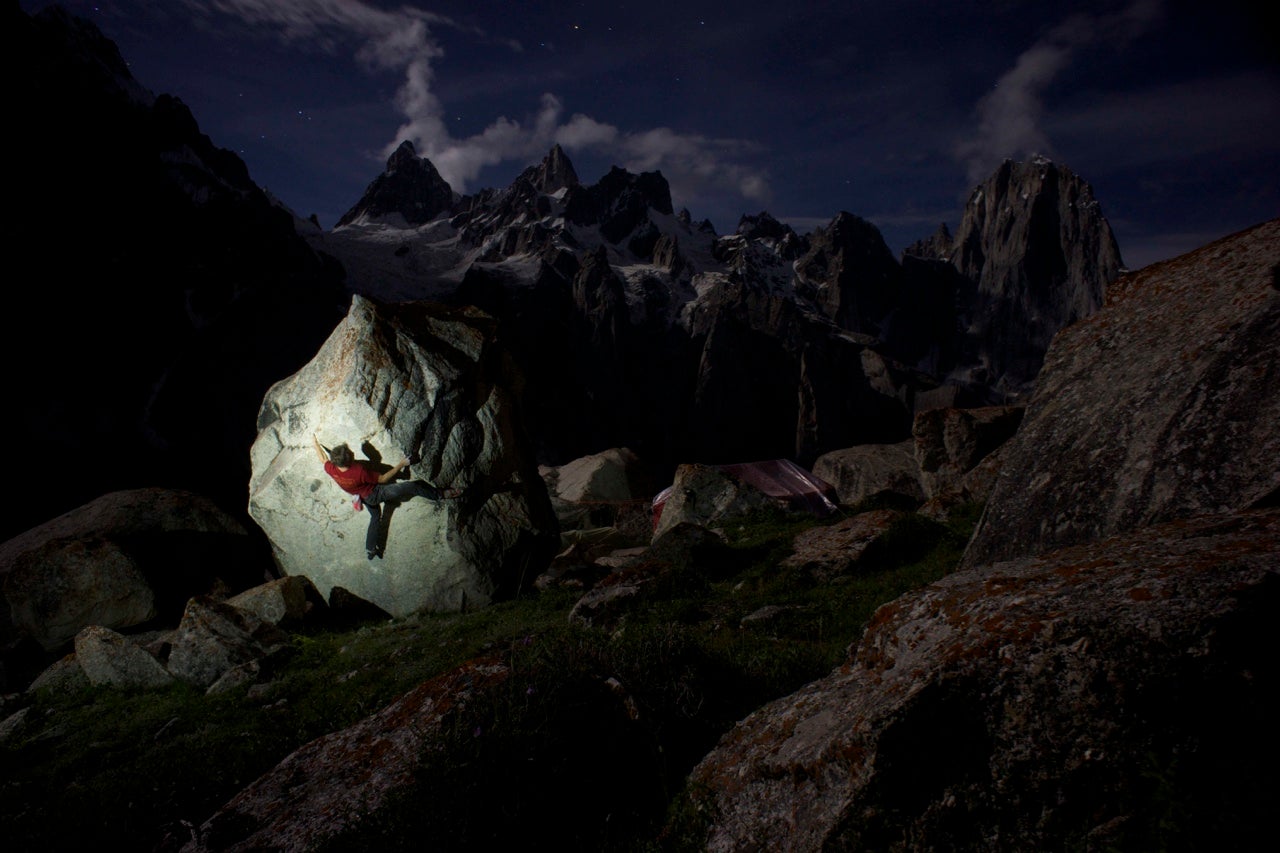 "The weather during the first half of the trip was generally pretty terrible with large electrical storms coming in during the afternoons. Due to this, we spent significantly more time in basecamp than we expected.

There was, though, a benefit to this, which was that the bouldering around basecamp turned out to be fantastic. We developed a circuit of 15 to 20 problems ranging from V0-V5 around camp that kept us fit and happy while we waited for better conditions in the mountains. On this particular evening, Scott and I spent a bunch of time taking photos with long exposures while using a headlamp as a light brush to illuminate the other on the boulder." 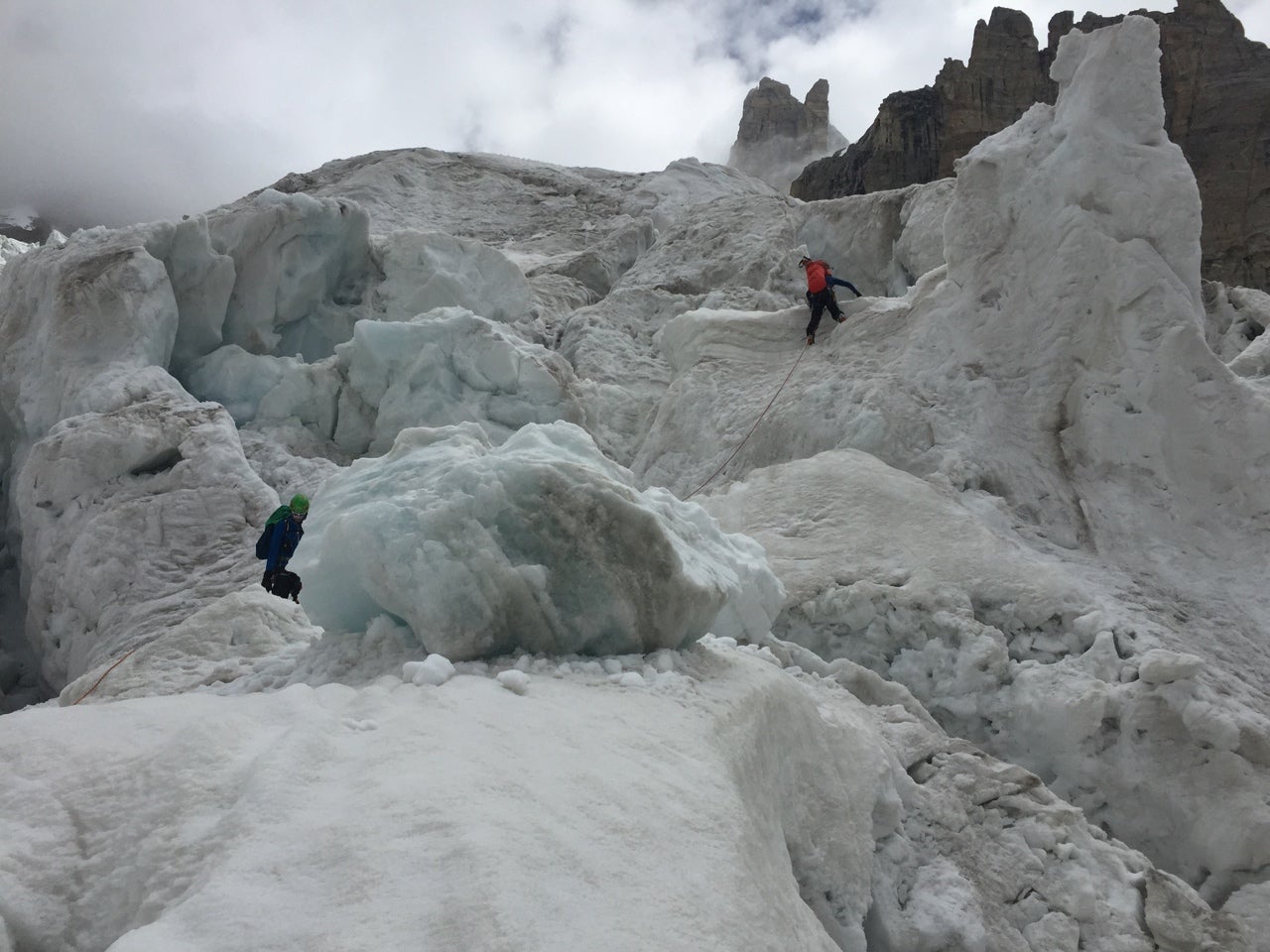 "When we did find ourselves with small windows of OK weather, we went to up to ABC to acclimatize and figure out the route to the base of Changi Tower. This proved to be quite a crux as there was a very steep, complex icefall between the two. On the first attempt at this feature, it took us two days to find our way through the maze of ice cliffs and crevasses. (Later, though, when we knew the route, we were able to move through much faster). By the end of July we were sufficiently acclimated to attempt Changi Tower, had a cache of gear near its base and were simply waiting for clear weather so that we could make an attempt." 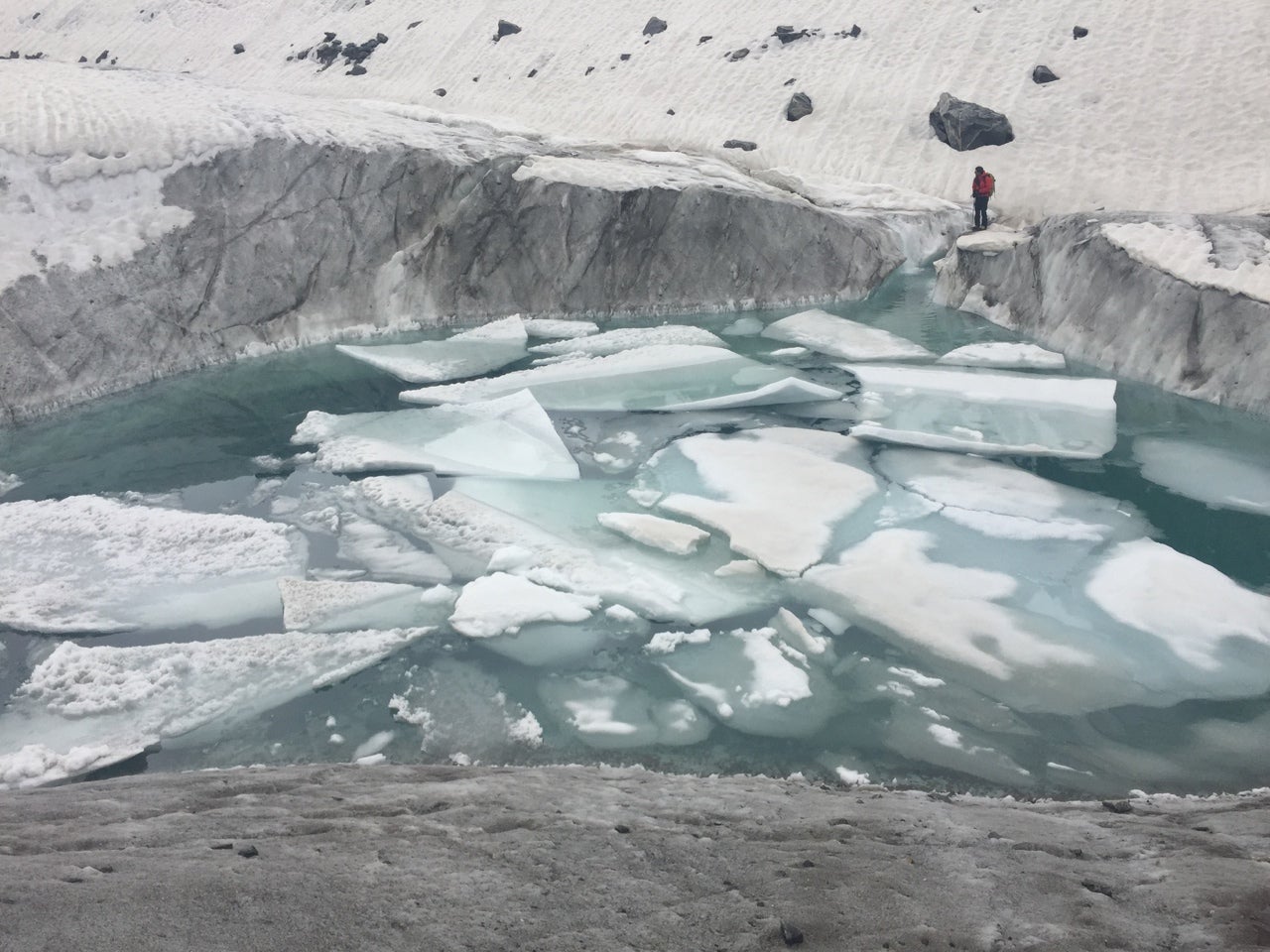 "During our six weeks in basecamp, we spent heaps of time moving over the glaciers that flowed down from the mountains above. It was incredible to watch these huge features transform as the season went by. This season was a particularly hot year in Pakistan, causing lots of bad weather including large thunderstorms. This made the transformations particularly noteworthy. Here, Steve stands next to a freshly melted out glacial lake on the East Nangmah Glacier." 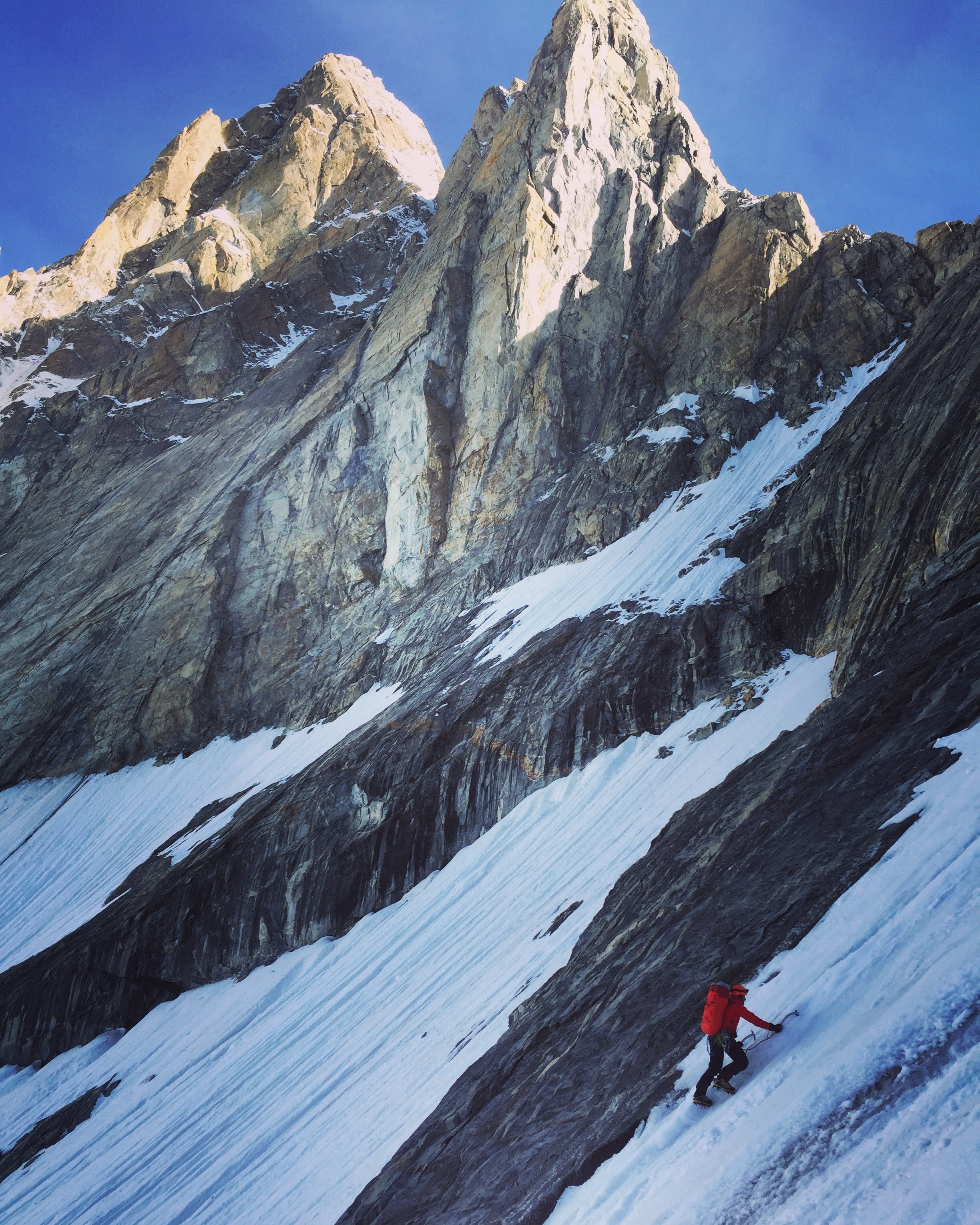 "During the second week of August, we finally received a forecast that we considered acceptable for going climbing. We had been well acclimatized and ready to go for nearly two weeks but had been held back by huge thunderstorms thrashing the range. We hustled to get into position and on the 8th of August started up towards Changi Tower from advanced basecamp. The icefall had deteriorated in the poor weather, but with a few crevasse jumps was still passable.

From our former highpoint, we soloed 300m of 50-degree snow and ice to the Polish Col where our intended route on the North ridge of Changi tower began. In this photo, Steve Swenson climbs up to the col with the towers that dominate the eastern side of the K6 massif in the background." 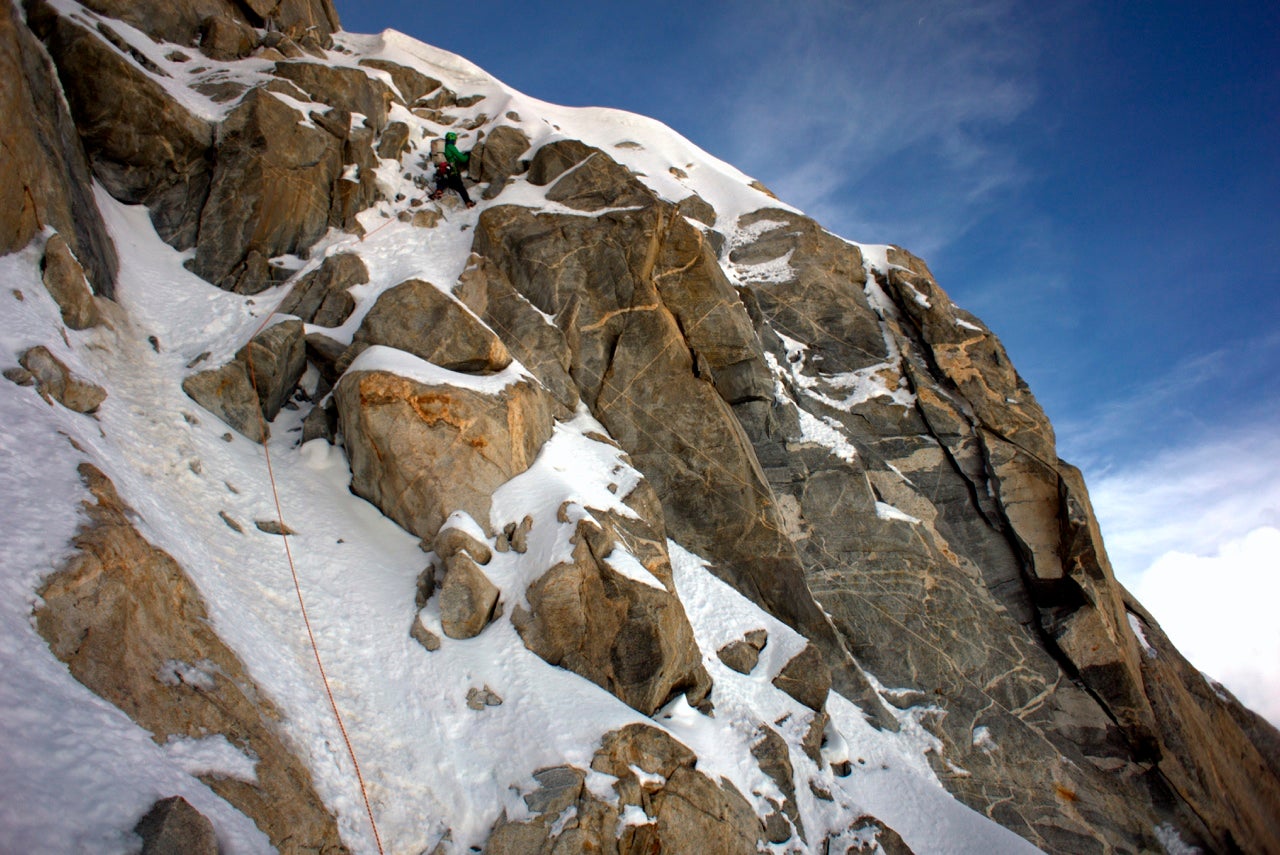 "During our first day on Changi Tower we climbed to the Polish Col, reaching the base of the route, and then moved onto the route proper. The North Ridge started with moderate climbing on snow and ice that led into a section of mixed climbing. The mixed climbing was not particularly steep, but the afternoon sun had cause the snow and ice to soften making it challenging and insecure. We ended the day by building a bivy just below the first vertical rock band and fixing 80m of rope above us.

The next day we got to work early moving quickly up the mixed and rock climbing above. Here, Scott leads through beautiful mixed ground early on the second day on the North Ridge of Changi Tower (6500m)." 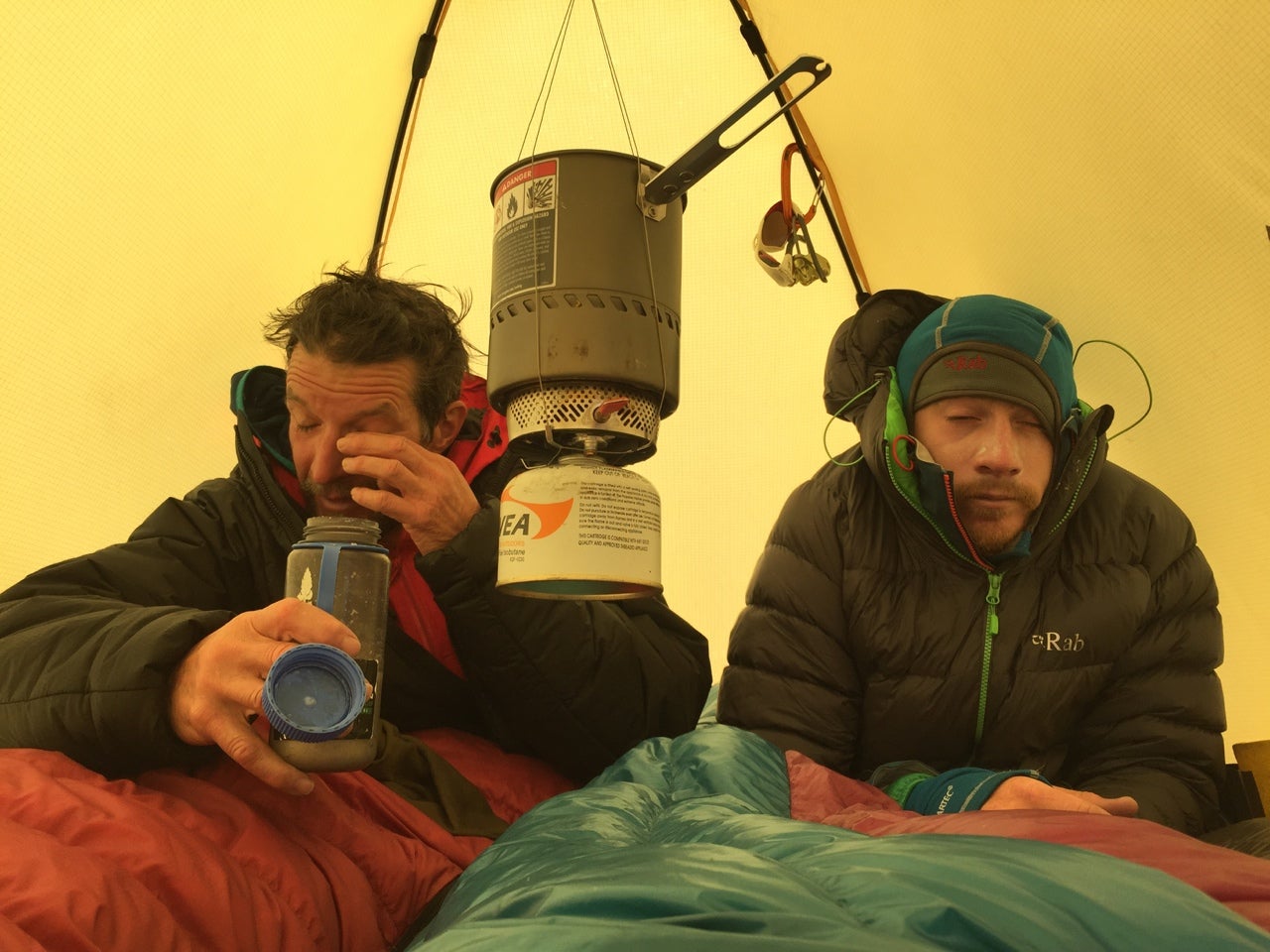 "We worked hard on the second day, climbing on Changi Tower. Having left our tent at the bivy from the first night we were committed to getting to the top and back to the bivy in a single push.

We topped out on the peak, making its first ascent via its North Ridge (M6, 5.10, A2 600m), just as darkness fell over the Karakoram. The route had involved many pitches of fantastic mixed and rock climbing on what turned out to be high-quality stone. After summiting, we proceeded to rappel into the night, reaching our bivy at 3 a.m. This photo was taken in the morning after we had slept for a few hours. You can see from the faces on these two fine fellows that we had put in a serious effort.

At this point we still had three days of hard effort in front of us to get back to the comfort of basecamp. We were pretty wrecked." 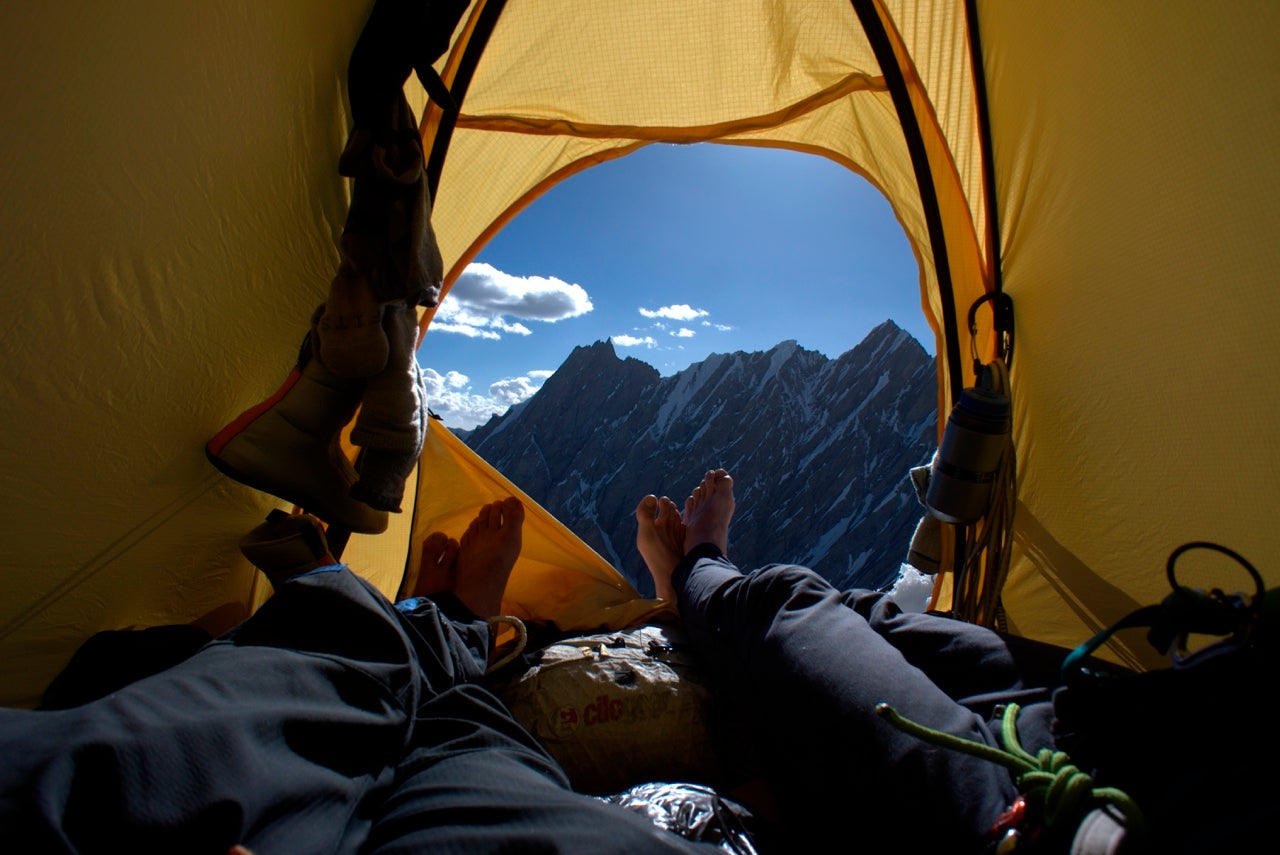 "A few days after getting back from our first ascent on Changi Tower, we were off again to attempt the unclimbed SW ridge of K6 West (7040m). We had originally planned on attempting the central buttress of the Central Peak, but as can sometimes happen on exploratory missions, we found it to be far too hazardous, with multiple giant seracs hanging over the lower 700 meters of the route.

Just as we were about to depart for K6 the weather window we had seen on the forecast shortened and we were forced to pare down our equipment to the absolute minimum in order to have a chance of moving fast enough to get up and down before heavy precipitation showed up. Steve, being the wise sage that he is, decided that he was not yet sufficiently recovered from Changi Tower to get onto K6, so it was left to Scott and me.

We got onto the route just after a small spell of bad weather ended and climbed a steep snow and ice slope to reach the ridge proper. We were forced to do this in the mid morning which meant that conditions were hot and the snow was terrible. When we finally reached the ridge, we set up our tent and bivied with our alarm set for 2 a.m. This photo is looking out from our little bivy tent as we prepared to get some rest before a big push on day 2." 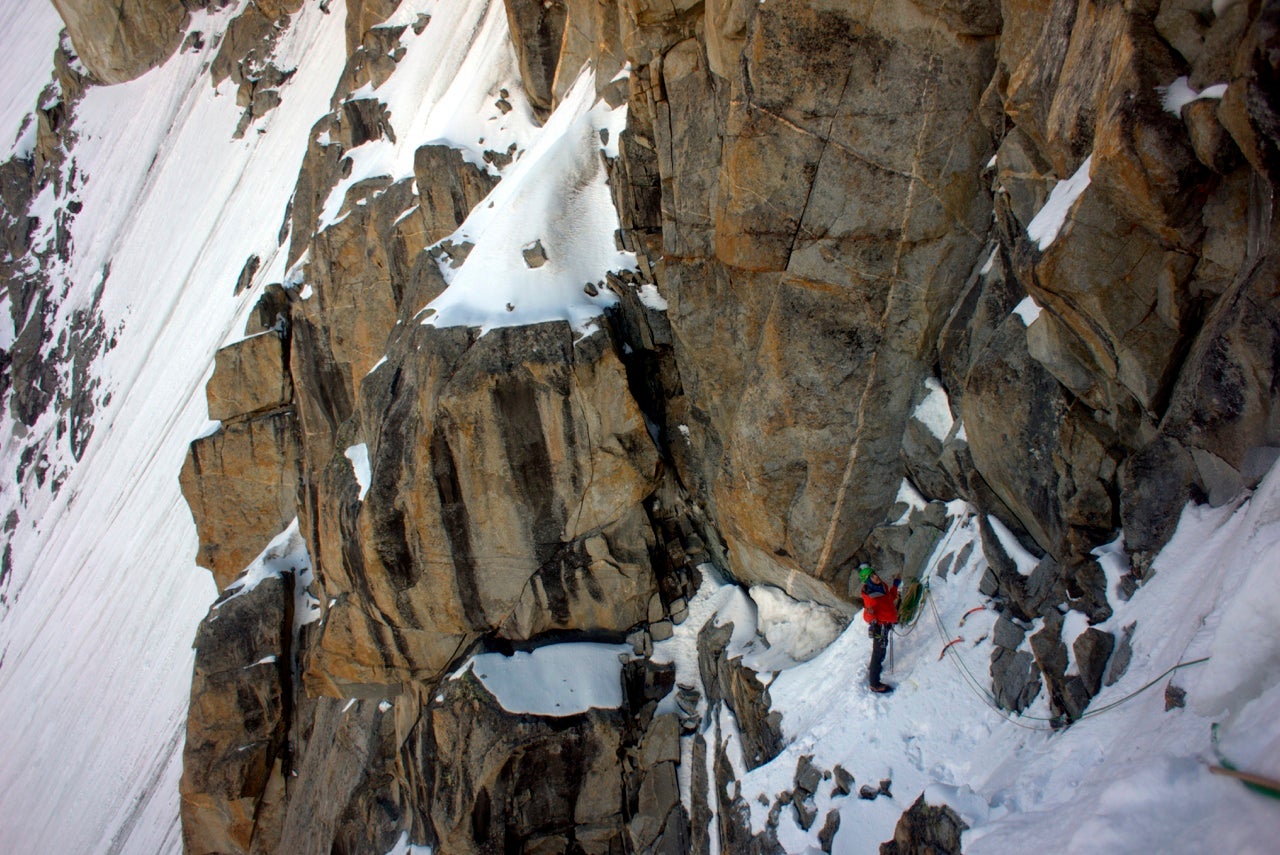 "The climbing started out with a stunning ridgeline. At times we were able to climb on the top of the ridge, and at other times we were forced onto its sides where we encountered vertical ice and great mixed climbing.

As the sun came up we approached the major question mark on the route, two huge buttresses that soared out of the ridge. We were very psyched to find a series of ramps separated by mixed climbing that connected their way across the west side of the buttresses. We moved into them eagerly. This photo was taken in the midst of that traverse.

Eventually we reached a large icefield that led to the top of the second buttress. It was a very strenuous end to the day as we climbed the 400 meters of 70-degree ice. Topping out the second buttress we were greeted by a perfect bivy just as darkness once again came over the range. It had been a huge day with 800 meters of vertical gain and nearly a kilometer of technical traversing." 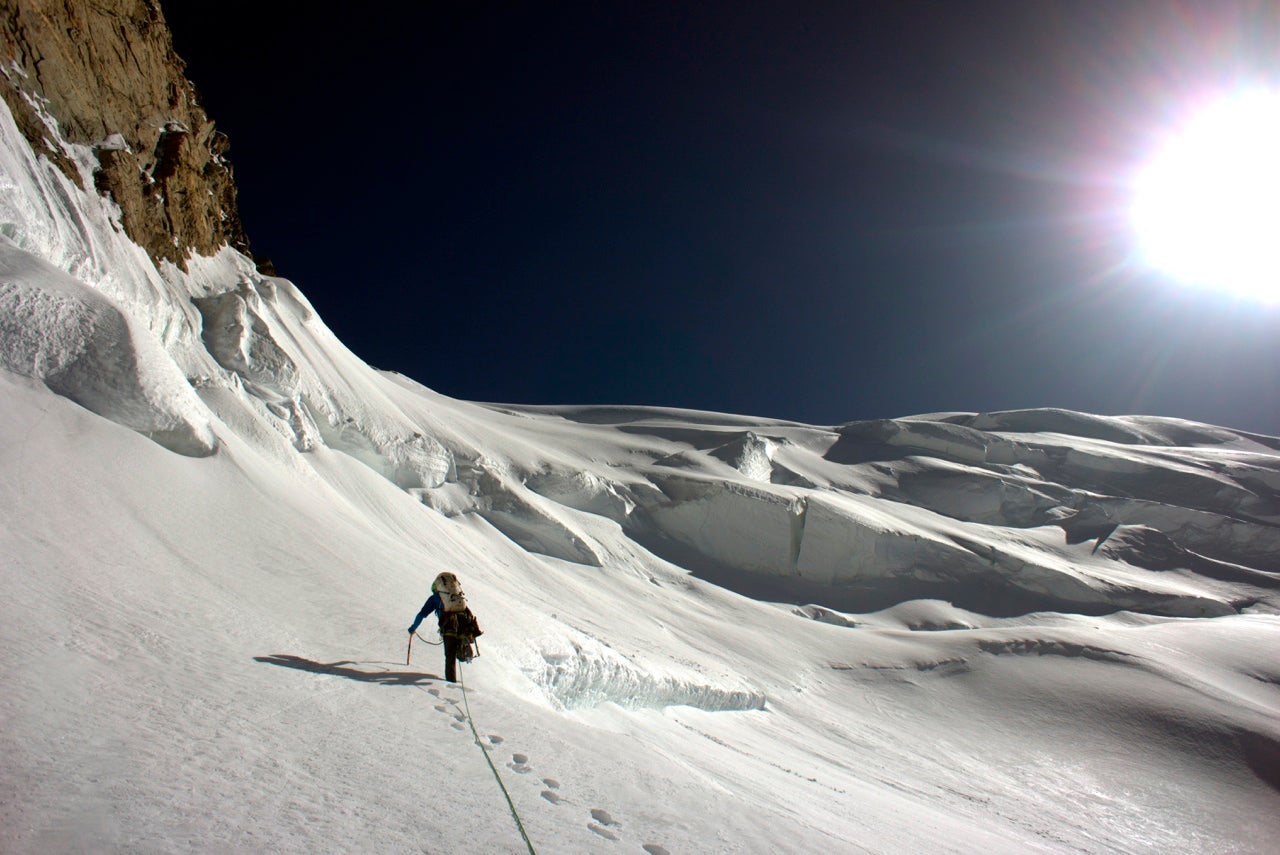 "We started our third day on route at sunrise. Above our bivy on the ridge, we could see the summit 450 meters above us and could see that the terrain was not too technical. Our hope was that the snow was in descent shape so that we could get up and down quickly and start moving down to the mountain.

This was, unfortunately, not to be. The snow was deep and we had to work very hard to reach the summit, which we finally did at 1 p.m. The view from the top was totally worth it. Absolutely stunning.

We spent about 15 minutes on top before starting back towards our bivy which we reached at 4 p.m. We had to get off the peak pronto, knowing that a storm was inbound. So we ate our last meal, slept for two hours and at 8 p.m. started down the west face. At 1 p.m. the following day we finally reached basecamp after doing nearly 30 rappels with lots of traversing and down climbing to get off of K6. We were wiped out and incredibly psyched." 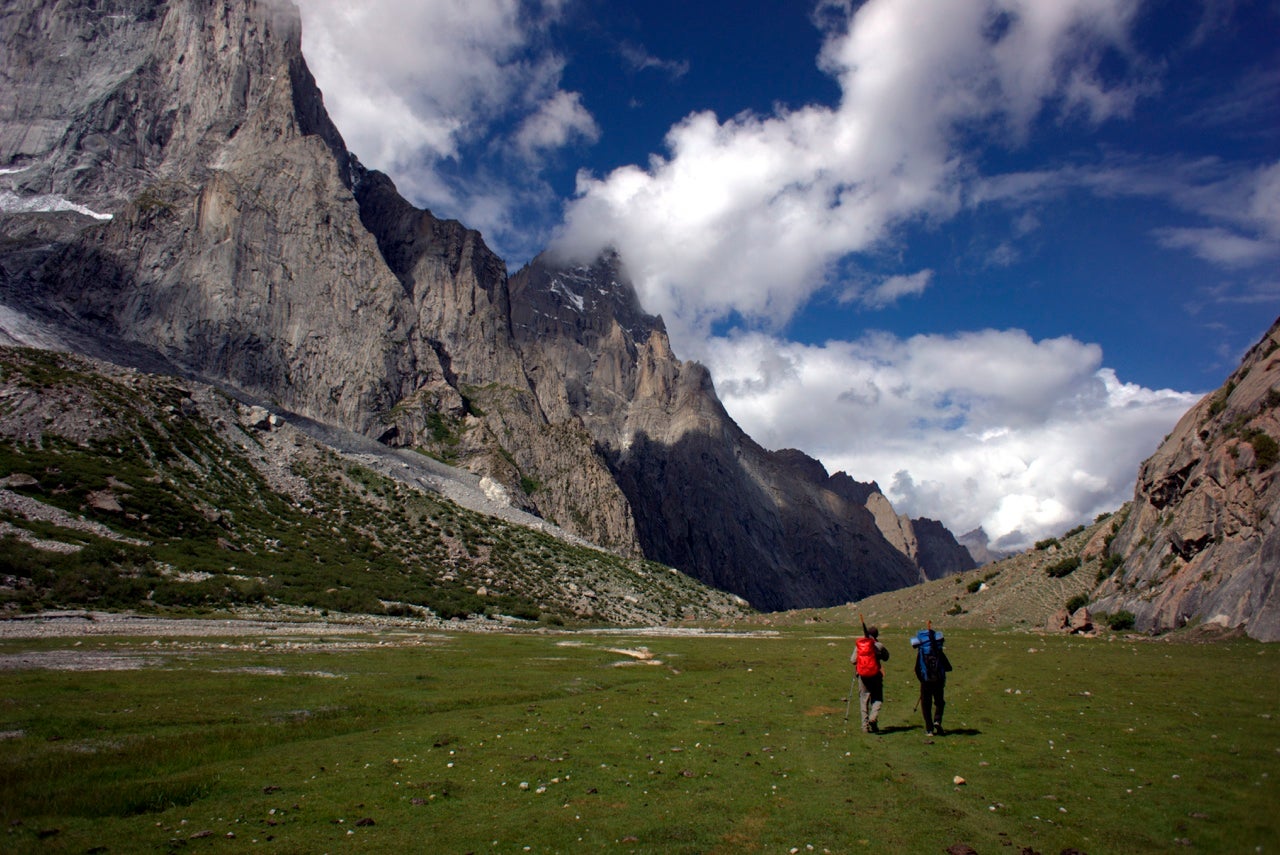 "After we climbed K6 it snowed heavily and it was time to go home. The porters showed up two days later, we packed up all of our kit and headed for the road, starting our long journey home. This photo shows Steve and our cook Rasool walking along together on the way out, chatting about life and their long friendship. These two have been close friends for more than three decades, with months and months spent together in the high mountains of the Karakoram. On this trip their experience both together and apart was a huge part of our success. I have huge gratitude for both of them and all that they taught me while I was in those stunning mountains with them. I hope to continue my friendships formed in that beautiful country and continue a long a fruitful climbing career in those amazing mountains.

This trip would not have ben possible without the amazing support of the American Alpine Club’s Lyman Spitzer Cutting Edge award, the Mugs Stump award, the New Zealand Alpine Club’s Expedition Fund and the Mount Everest Foundation. Huge thanks to all these organizations for their support of our team and other like it. And huge thanks to our sponsors, particularly the rad folks at Outdoor Reseach."