Kalymnos might just have the ultimate sport-climbing vacation combo, says climbing photographer Anne Skidmore. Plus, when you're in the middle of a drawn-out New England winter deep freeze, average high temperatures in Kalymnos are in the balmy mid-50s. Anne made her first trip to Kalymnos this past year, and has fallen hard for it: "The culture, the food, the wonderful people, the history, the incredible rock, the scooters! Oh, the scooters!"

Anne and her friends made the trip to escape the long, cold winter—and get pumped for the rest of the 2015 rock climbing season. "It's the best tufa climbing I've ever experienced," she says. "The only other places I've climbed tufas is Turkey and, oddly enough, Texas. It's 3D climbing at its finest, and it is wild. You find yourself bridging, stemming, heel hooking, arm wrapping, knee baring, straddling, squeezing, and chimney-ing the rock. And you get pumped out of your mind. It's steep, the falls are clean and the views never suck. Just be sure to at least bring a 70-meter rope, or even better, an 80-meter."

Anne traveled to Greece with a goal of balancing her own climbing with focusing on shooting photos. "I'm in the work hard, play hard mode," she says. "And it's also nice to combine a little work and play on these trips ... Oh yeah, and I had a lifelong dream of being a part of a scooter gang, and Greece fit into that."

Her insider tip? "if you want some adventure, there is an island across from Kalymnos called Telendos that has 800 foot+ long sport climbs," she says. "It's a great way to give your forearms a rest and get off the ground. And the boat ride over there is a blast."

Here are a few of Anne's photos to get you planning your own Greek winter vacation. We know you're already checking ticket prices. 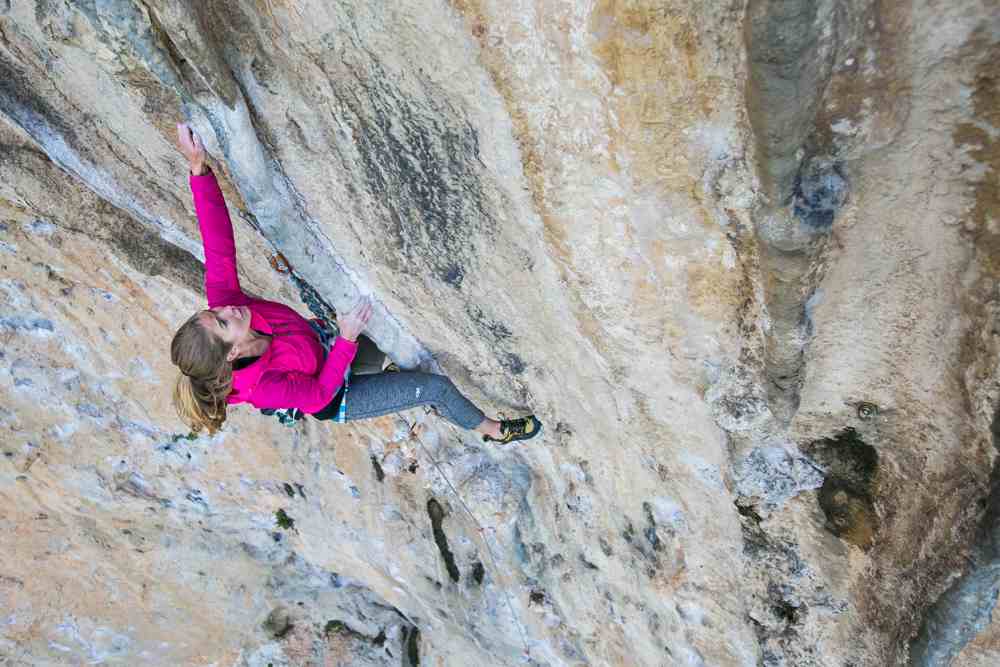 "The tufas seem to be never ending, but we are halfway through our trip and are already daydreaming of returning, and for longer. Jordan pulling strong on Les Amazones at the Spartacus Wall." 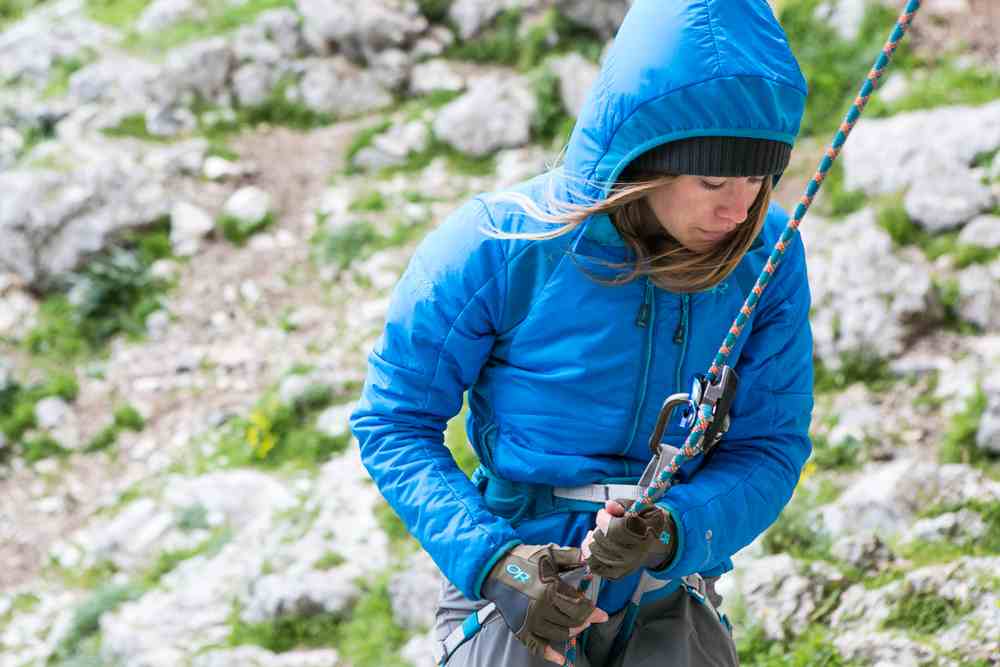 "Patient, solid and thoughtful belays are a huge key to success when pushing to your max on any roped climb—trad or sport—especially when some of the routes require a 70- or 80-meter rope. In addition, being bundled and staying warm while belaying was the key to success in remaining a happy partner. Here, Jordan awaits and belays Jeremy as he works some moves at the Spartacus Wall." 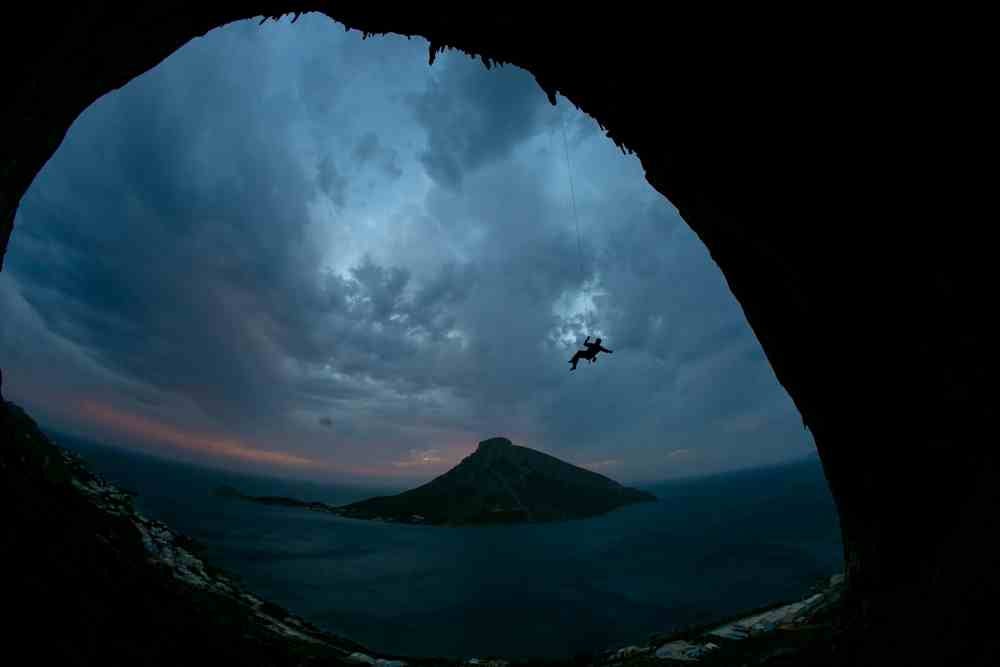 "Some days, rock climbing clears your head and makes you smile like your best friend would, and some days it leaves you heartbroken when you fall off that last move. But when you look back on it, it's always worth it for so many reasons. Here is Jeremy being lowered down from the Grande Grotta cave after his fingers couldn’t hold on to the exiting moves of the 70-meter route, Priapos." 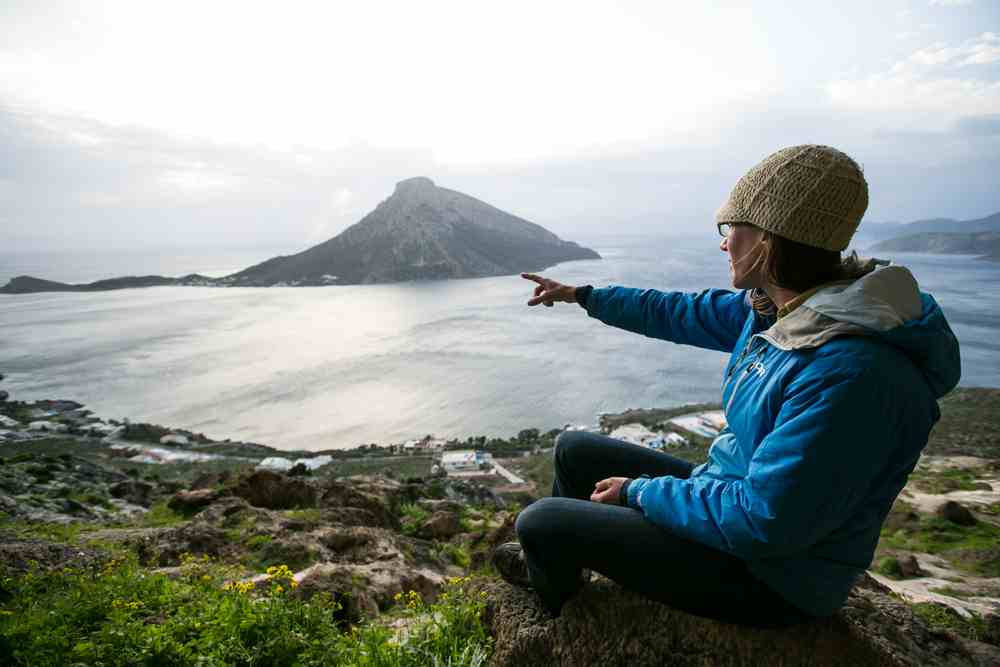 "Where did our sunny tank top rock climbing trip go? On our final days in Kalymnos the Greek Gods sent howling cold winds upon us. We sought after the most sheltered cliffs, as the winds were so strong they would blow us over hiking up to the crags. Were we in Patagonia? No, still in the Greek islands. Here Jen was enamoured by the incredibly relentless winds on water in the cove below Telendos as we were staying sheltered in the cave of the Grande Grotta." 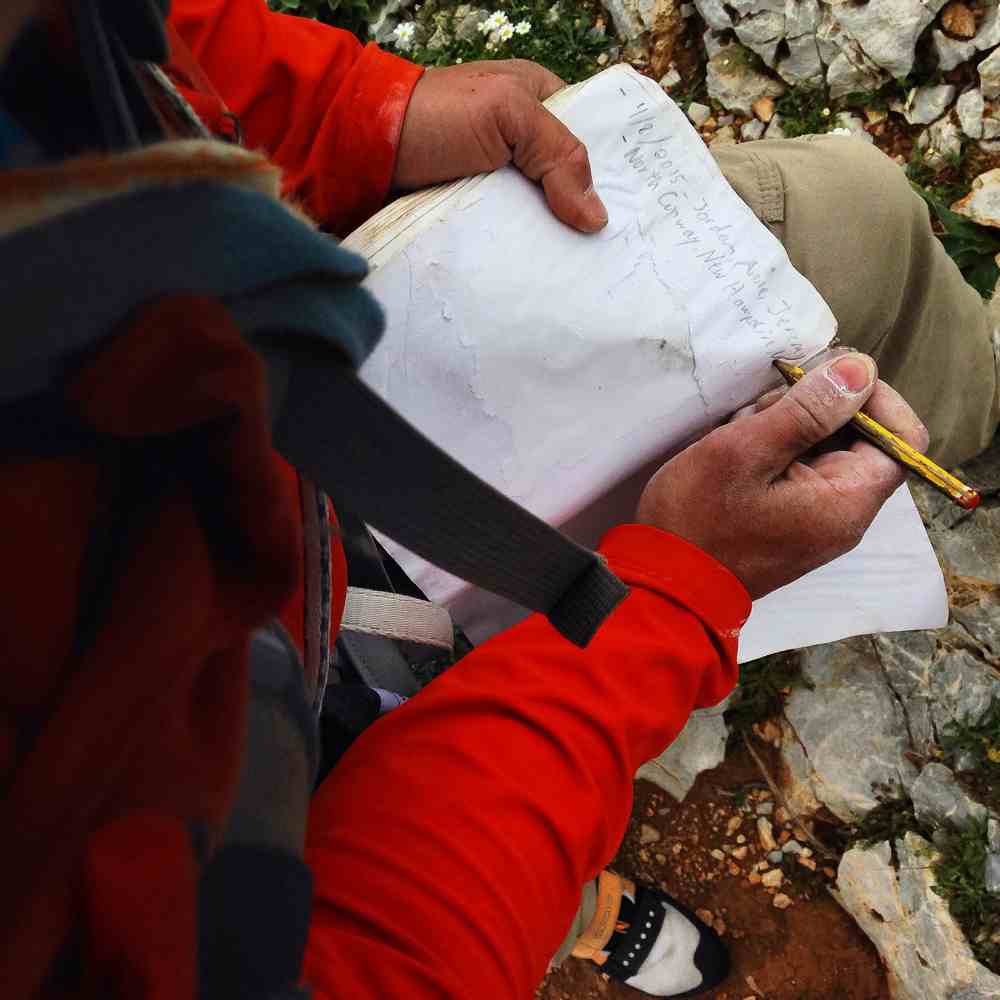 "Tufa climbing itself feels wild and adventurous, but there is even more adventure to be had here. Across from Kalymnos is the island of Telendos, and it's visible from almost every crag. Telendos is full of rock, including 800+ feet of adventure sport climbing. We hopped on a 15-minute ferry over to Telendos to climb Wild Country, a fun 800-foot multi-pitch adventure sport climbing route. It was the perfect thing to do when we wanted to climb, but our bodies couldn’t fathom another overhanging, steep tufa climbing day. Here, Jeremy signs us into the summit registry after topping out." 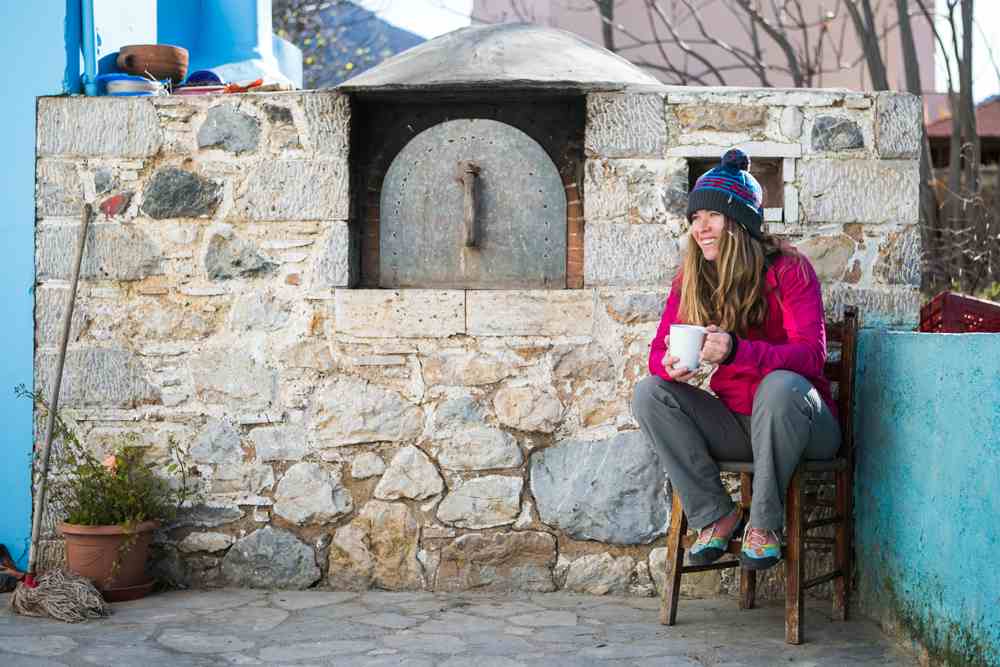 "Rest days are inevitable, but waking up in such a beautiful place with such wonderful people makes you look forward to relaxed coffee mornings followed by exploring the island and visiting ancient ruins via scooter. Here, Jordan enjoys a cup of joe at the wonderful 'Climbing House' on Kalymnos." 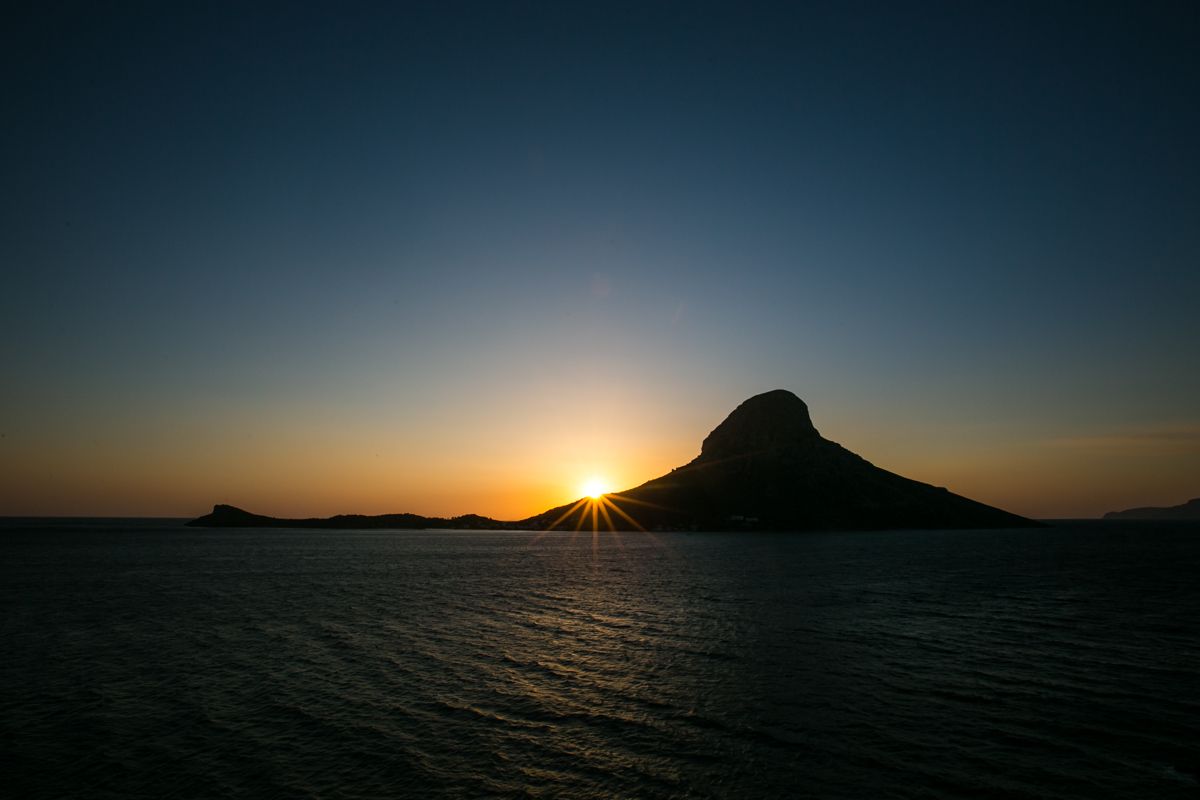 "After a 2.5-hour drive to the airport and 17 hours of air travel, we made it to the island of KOS. KOS is a neighboring island to Kalymnos and we were only a 30-minute ferry ride away." 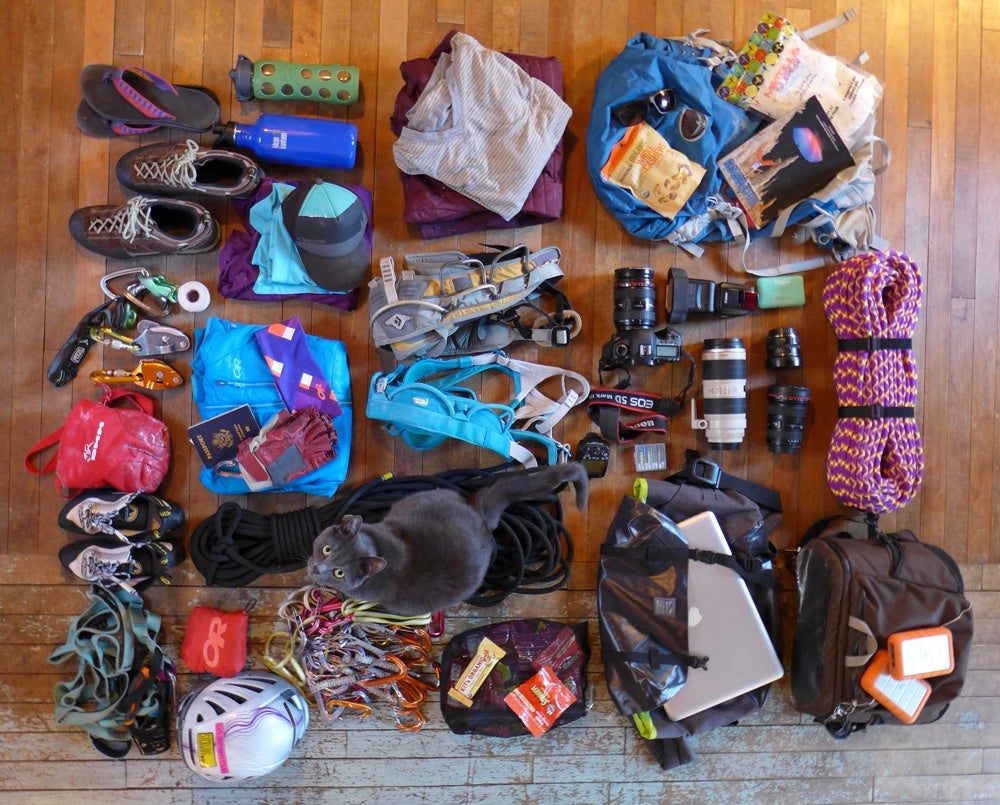 "Getting organized in my cabin for a lil’ tufa climbing, a lil’ shooting and a lot of amazing culture. My kitty Parkour is trying to convince me while I packed that the Mediterranean diet in Greece is perfect for her."