Portraits: Climbing Women On The Road 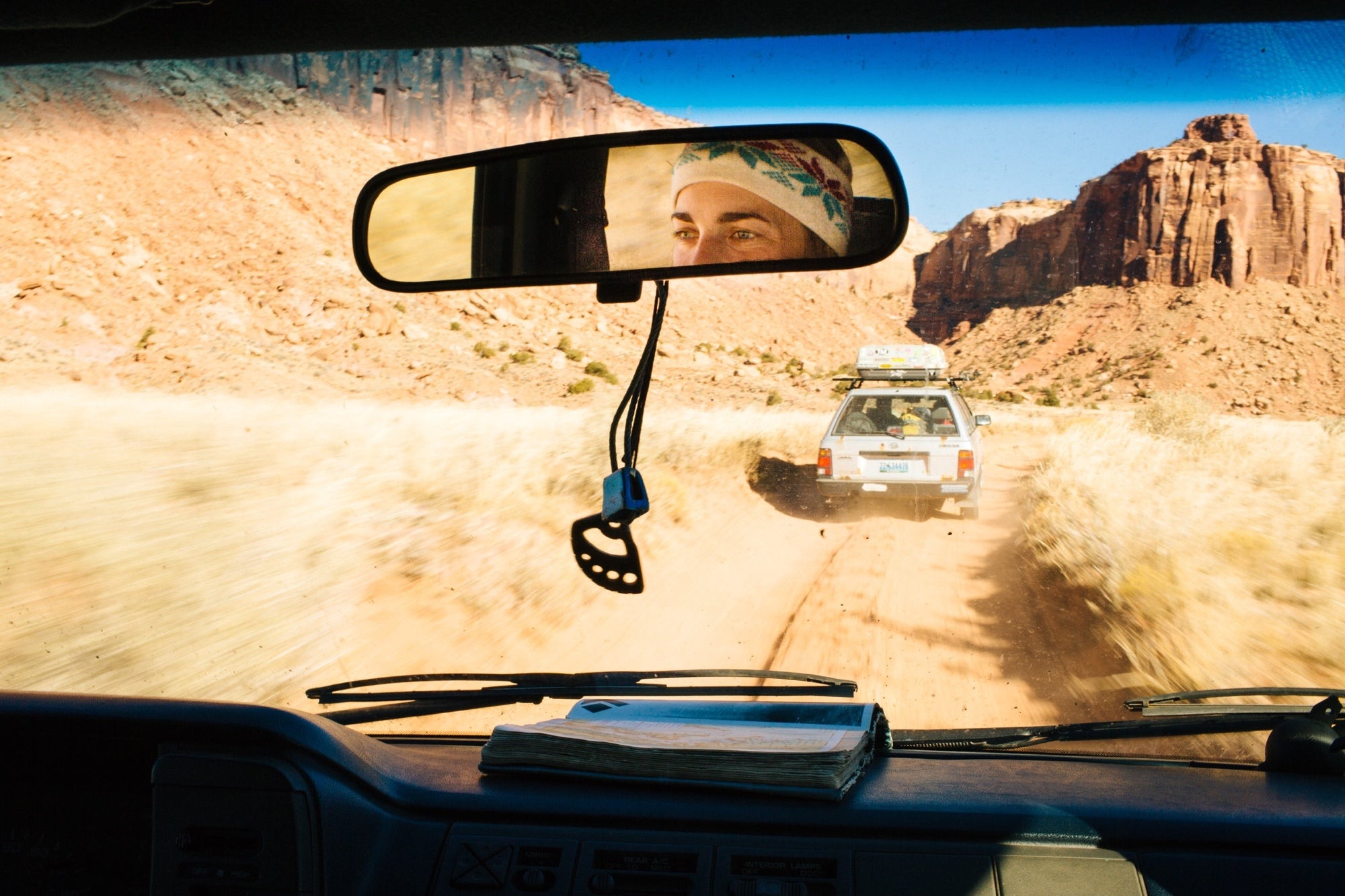 The sound of someone sorting their recycling in the bins a few meters away served as an alarm clock. We wake up in a dirt parking lot in Springdale, Utah, just outside the entrance to Zion National Park. And now as a small skid loader rambles up to the pile of rocks across the way, I’m roused from my bed and into the driver’s seat. I look outside and see the two cars that I traveled with from Colorado, plus a new one: a friend who has driven from California to climb with us. 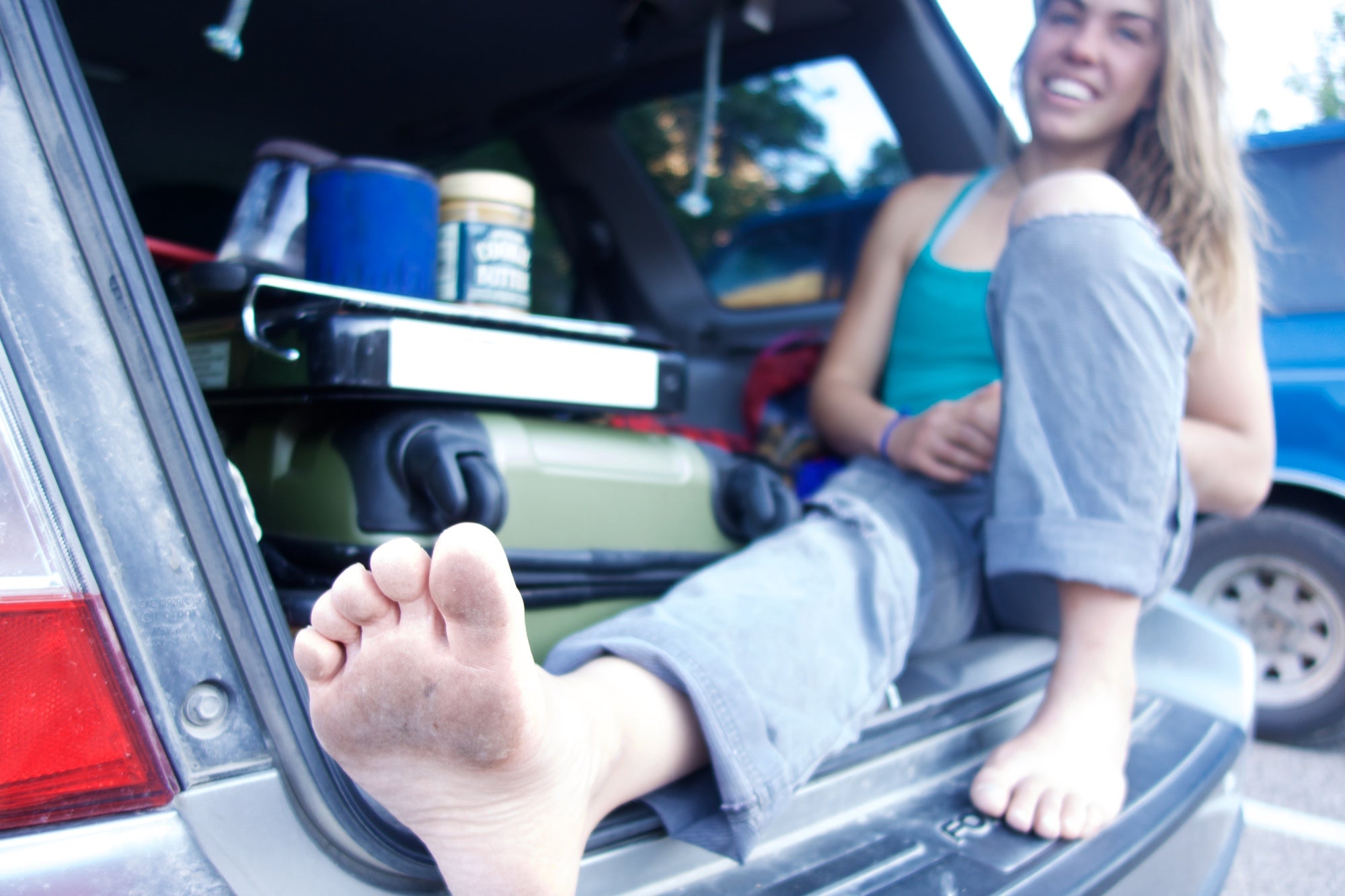 Hannah is standing outside her car, squinting at her reflection in the window as she braids her long, unruly hair. One time Hannah found me at a random rest area in eastern Nevada, the kind of place where you could bet your life on not seeing anyone you know. It was dawn, and I was just waking up and starting in on a morning crossword puzzle. Hannah was driving through the night on her way to climb in Indian Creek, and I was on a more leisurely route from climbing the Eastern Sierra to a film festival in Colorado. Hannah saw my van from the freeway, thought, “That’s gotta be Jenny,” and pulled a u-turn. I saw a silver Subaru pull in with a Thule on top, and I thought, “That can’t be Hannah,” and we looked at each other through her windshield with jaw-dropped smiles. Hannah just moved into her car after filling her savings account with waitressing tips and wages from ski patrolling all winter; and when asked where she’s headed, a huge grin crosses her face and a twinkle enters her eyes as she lists off climbing objectives from the Sierra in California to British Colombia’s Bugaboos. 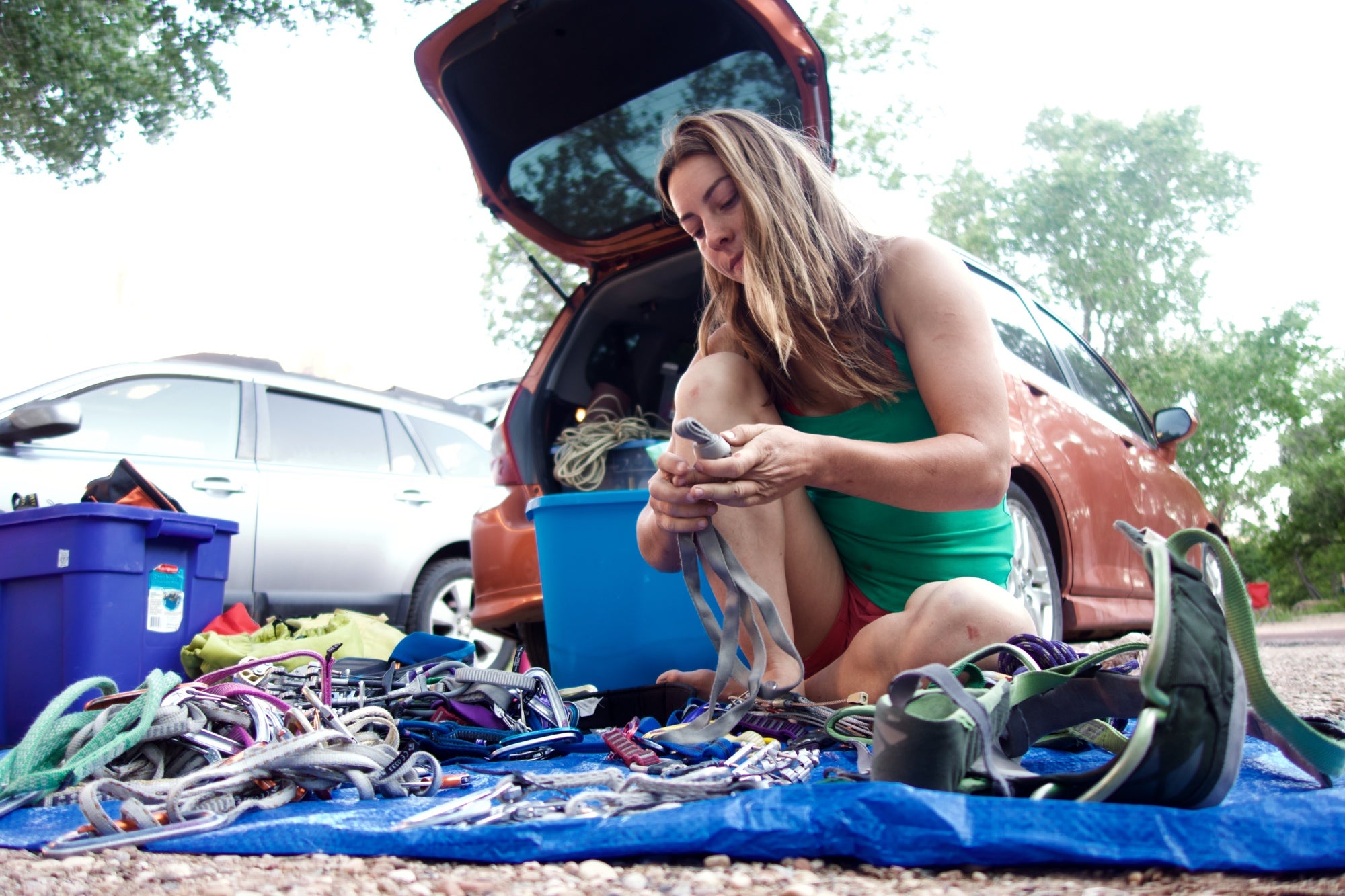 Jane’s up and putting bins back into her Honda Fit, a compact car that barely seats four yet sleeps her small stature comfortably. Jane excels at organization—like most of us who live out of small places—and everything has its place in her little orange home. She alternates between the road and school in St. George, Utah, where she is an encyclopedia on free places to sleep, shower, and get wifi. Jane began as more of a sport climber; within the last few years she has honed her skills on longer, traditional climbs and aid climbs, with a burgeoning interest in alpine climbing. She has a stronger head than most, and watching her through this progression is exciting. Jane and I first met in Zion, and have crossed paths in various climbing areas in the years since, now making those paths intentionally come together for the first time. Our connection mirrors that of many in the climbing world: acquaintances growing into strong bonds over shared campsites, belays, mutual friends, stories and lifestyles. 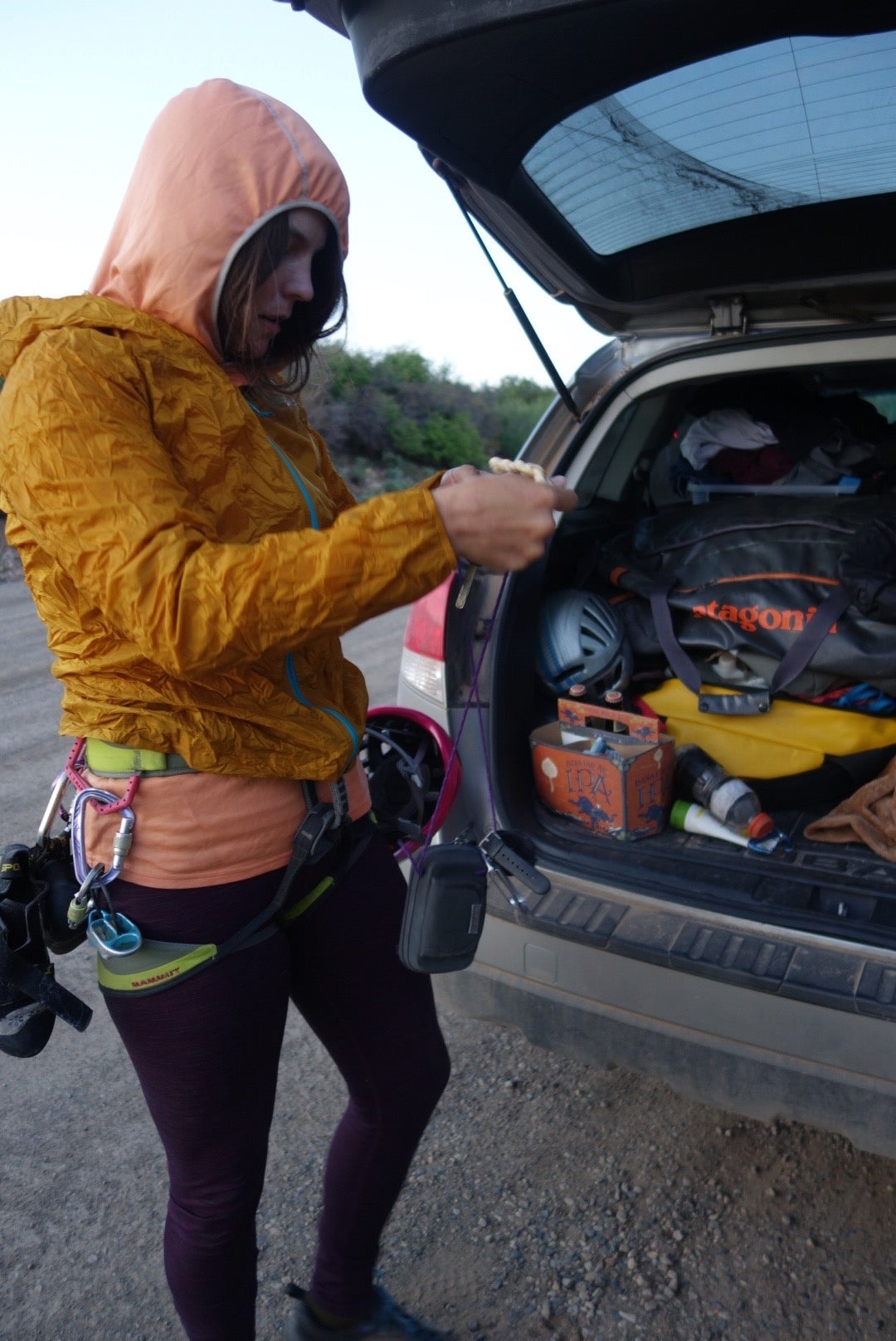 I glance over to see Whitney crouched in front of her stove with the espresso maker perched on top. Whitney drinks coffee more routinely than anyone I know, and I’ve never seen her buy a cup. She and I used to live together in a cute house in Leavenworth, Wash., a house that serendipitously had a bouldering wall in the basement and a large space for working out and hangboarding in the garage. We spent an entire summer together as roommates, coworkers at a restaurant and dedicated climbing partners. Now we’re both back in our respective vehicles, as we were before we lived together. Whitney has been living in her car on and off for six years, supported mostly by a seasonal nannying gig and more recently by climbing grants that send her to remote areas across the world for alpine exploration. Whitney has this lifestyle on lock. She eats healthier than most manage to do with a full kitchen, preparing the most incredible salads full of fresh vegetables—a masterful feat and a true art in the land of rice and beans and energy bars. 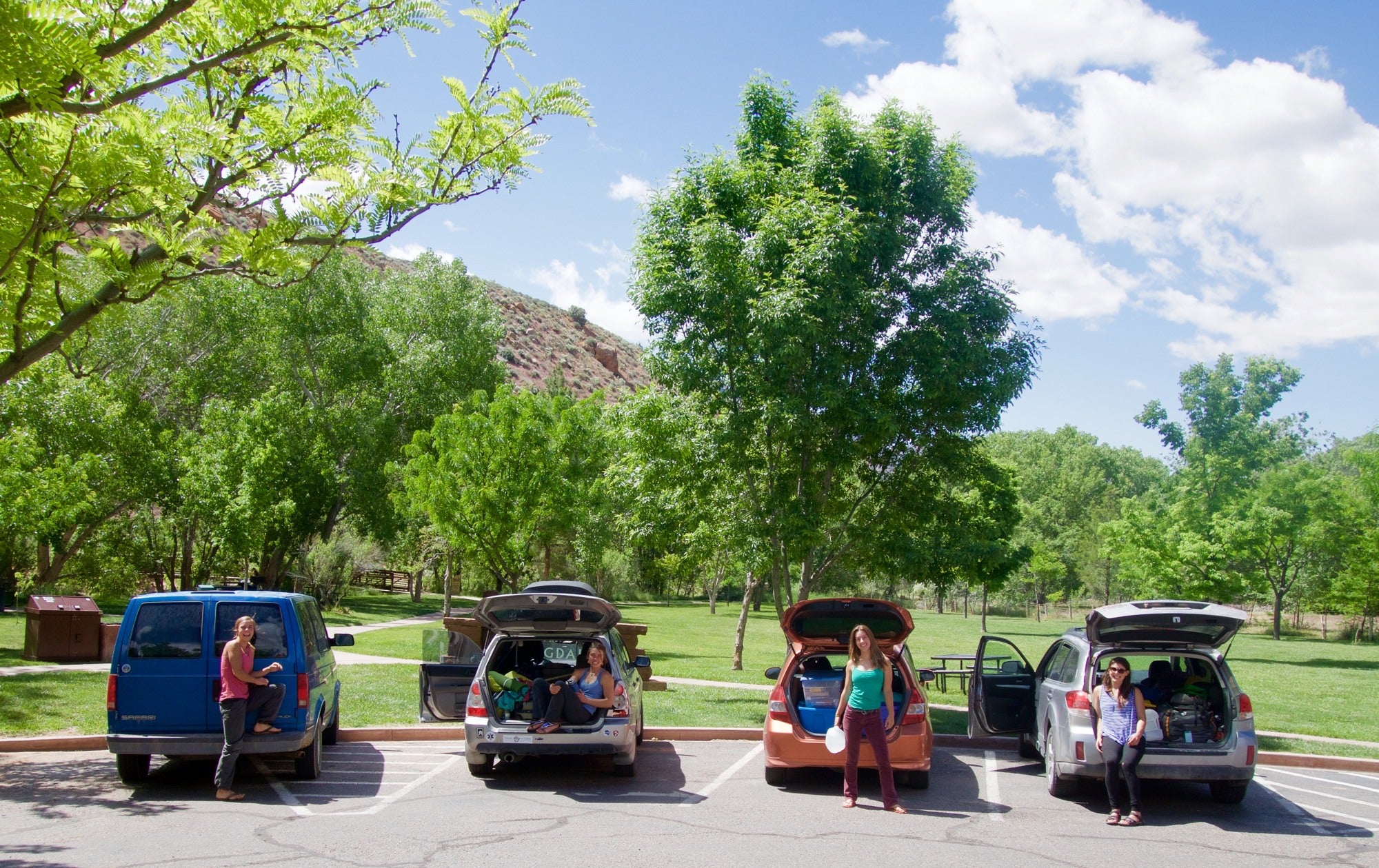 We don’t want to be on the road forever; in fact, much of our conversation throughout the week surrounds the questions of where to settle down and how to make a more sustainable income while keeping our schedules open enough to wander. The Eastern Sierra, Colorado, Wyoming? Hannah and Jane are going back to nursing school, Whitney and I are becoming climbing guides. We’re piecing it together for now, for the love of climbing and the freedom of the road, but it comes with sacrifices. Hannah and I are currently trying to make a buck or two rigging for a shoot here in Zion. Every meal we share is cooked on our Coleman stoves, $4 showers are deemed too expensive, and paying for camping not an option. Hannah’s pants have a hole in the butt that grows larger and larger every day, Jane’s car routinely doesn’t start, Whitney is constantly asking to borrow our national parks passes so she doesn’t have to buy one, and I am living off of a consistent diet of rice and beans. We’re not destitute, though. We just have our priorities.

Back in Springdale, the four of us rally together and make a plan for the day - Shune’s Buttress, a classic 800 foot, 5.11+ on splitter sandstone. We jump into our respective homes and drive into the park, filing in beside each other and tossing gear and ropes onto the grass. There’s a sense of excitement for the day. Because even though our community of dedicated female climbers is growing, it’s still a unique feat to bring four ladies together for a week of climbing and general dirtbaggery. For now, at least, we’ve found our tribe, and the camaraderie and positive vibes tells me we’re all aware.