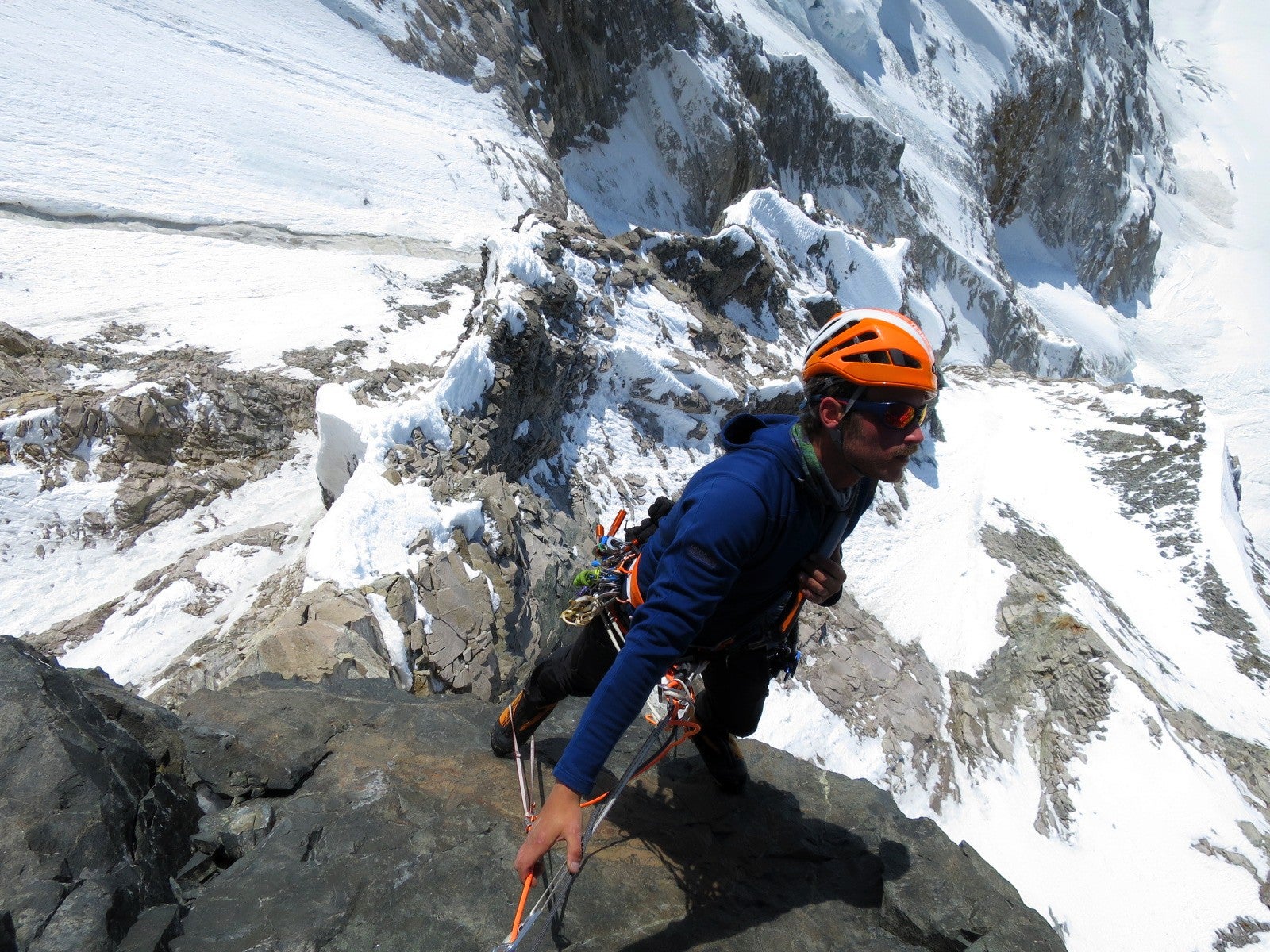 Alpinists Graham Zimmerman (USA/NZ) and Chris Wright (USA/UK) have returned from a fantastic and fruitful expedition to the St. Elias Mountains of Alaska that resulted in the first ascent of the West Face Direct (M6, 5.10X, A2+, 95 degrees, 6000') of Celeno Peak (13,395').

The pair departed from their home in Bend, Oregon on the 6​of May and traveled to the small town of McCarthy, AK by way of Anchorage. They arrived in McCarthy in the late morning of the 8​th​and were picked up by Jay Claus from the Ultima Thule Lodge who flew them into the Canyon Creek Glacier. The Canyon Creek is nestled into the Western side of a group of peaks within the Wrangells known as the Twaharpies.​Rising from the head of the glacier is the West Face of Celeno Peak, the climbers’ objective. 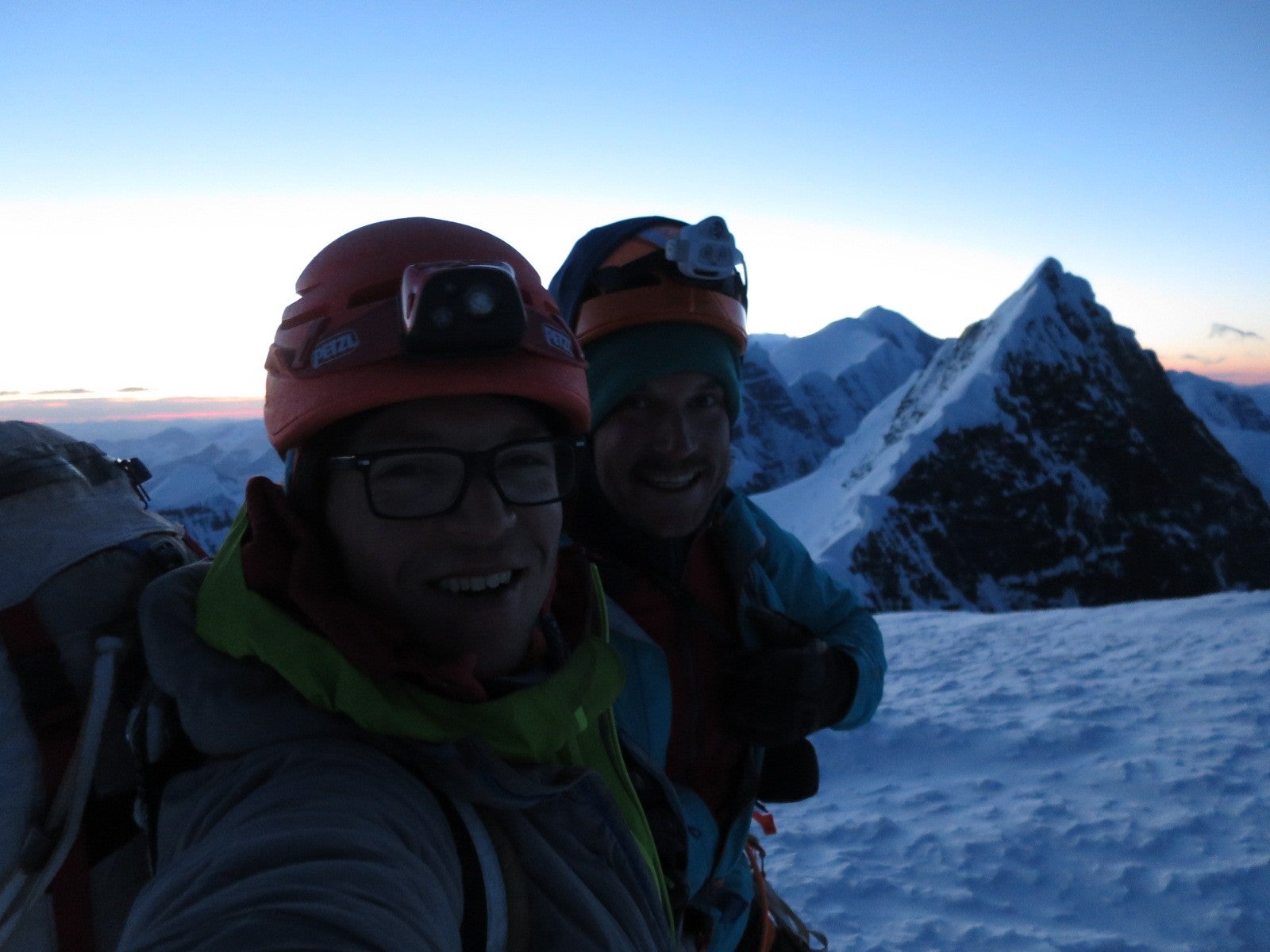 Jay Claus made the first ascent of the peak in April 2012 (see AAJ link at bottom). It was fortuitous that he flew Zimmerman and Wright into the glacier. As they flew, he was able to provide very precise beta on the best descent options from the peak. Zimmerman and Wright are very thankful to Claus for this beta as well as for the flight into basecamp. This was both climbers’ first trip into the Wrangell Mountains. The stunning beauty of the peaks and the expanse of range impressed them immensely; alongside the Saint Elias Mountains, these peaks continued to the horizon in every direction during the flight into the glacier.

In basecamp, a storm pounded the range the evening of the 8​and the 9​before clearing on the 10​. A forecast then showed a week‐long weather window, prompting the team to launch on a direct line up th​
the West face of Celeno Peak at 1 am on the 12​after waiting two days for the mountain to clear.

The route began with 2,000ft of snow and ice climbing to 70 degrees, which the climbers ascended unroped. A small section of this climbing had to be completed while exposed to objective hazard from above. With an impetus placed on climbing quickly, the team spent less than 15 minutes exposed the hazard. This placed them on a mixed spur they planned to climb directly to the summit of the peak. 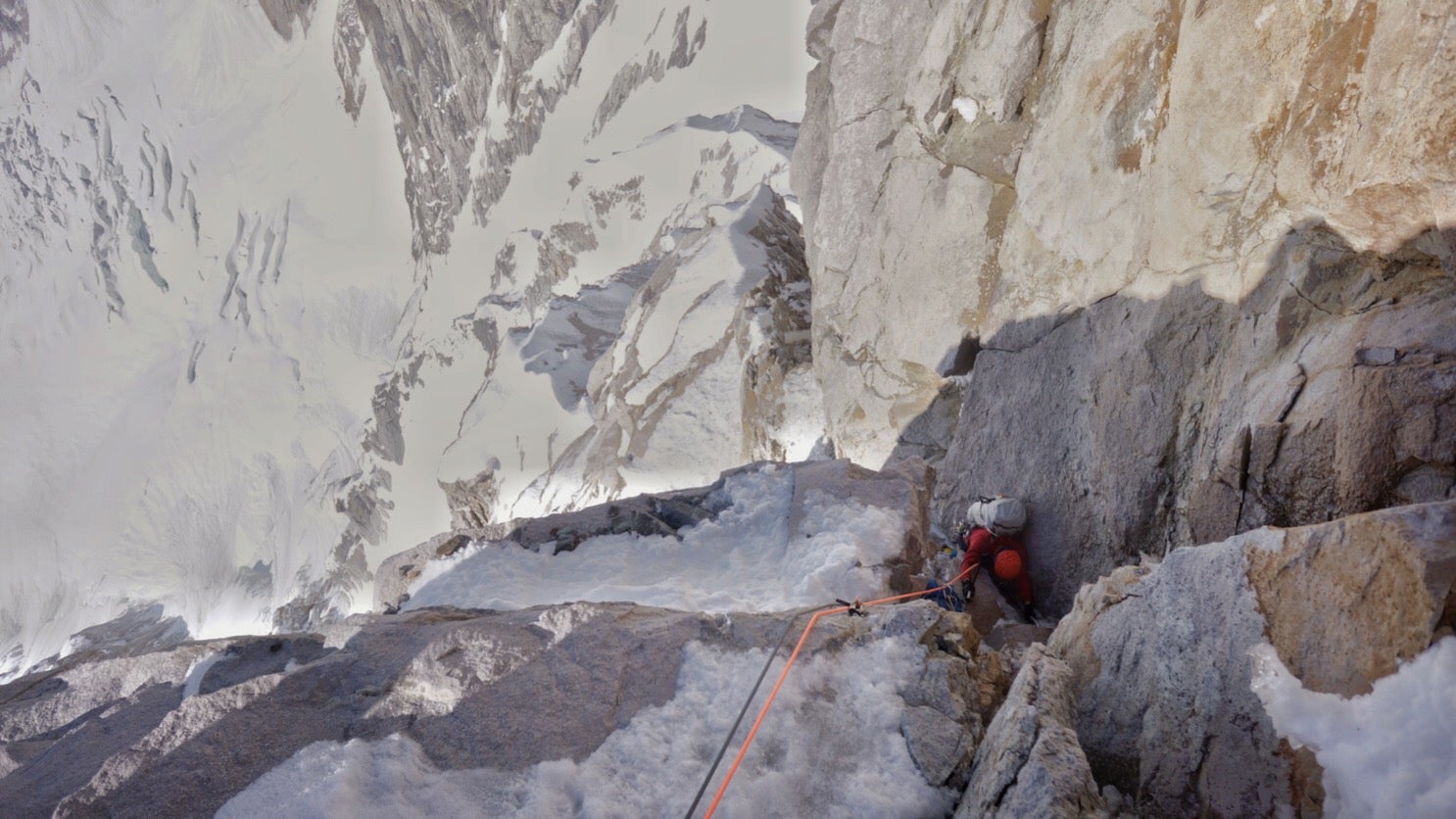 Zimmerman led the day's first block of pitches through fantastic mixed climbing, sustained at M4 to M5 with a stout M6 chimney crux. Wright then led two moderate, yet extremely loose, pitches that placed them at 3,000ft above the start of the route. There, they stopped in the late afternoon to bivy. They dug a platform into a thin snow ridge on the crest of the spur, which offered a relatively comfortable bivy free of objective hazard.

100 feet above this bivy was a geological contact between the granitic lower half of the route and the metamorphic rock that defined the upper half. This metamorphic rock presented above the team’s bivy as a severely overhanging headwall. Wright continued his block on the morning of the 13th, leading two moderate pitches that led to what appeared to be a weakness in the wall above. He then spent 3+ hours leading the route’s crux, a wildly steep and loose pitch of 5.10X A2+ that can only be described as totally f*%ked and a very compelling reason for this route to not be repeated by future parties. The culmination of the pitch came while he
was making the final aid moves through a roof and dislodged a large section of rocks, damaging one of the ropes and crushing a carabiner lower on the pitch.

After dealing with the damaged rope (fortunately the core shot was close to one of the ends), Zimmerman took the lead and carried the team through two more loose but moderate pitches of rock climbing to the top of the rock band and a 3x4ft platform on which they melted water and sat out the heat of the day. While this day resulted in less than 500' of progress, it allowed access to generally less steep climbing above.

Departing their small perch at 2 am, Zimmerman led through a final two high‐quality pitches of easy mixed before the route changed in nature from rock and mixed climbing to steep snow and ice. The team simul‐climbed to the top of the spur before cutting hard right to reach an iced gully that led to the summit. A short section of of this traverse was subject to exposure from a medium‐sized serac and the team moved through this section as quickly as possible. The day’s climbing consisted of approximately 2,500' of sustained 70 degree ice with short sections of 90 to 95 degree ice and snow as they crossed over flutings and between runnels. During this time the weather deteriorated, resulting in visibility being reduced to ~100'. It came as a huge relief when they reached a large flat snow ledge just below the summit in the early afternoon. Due to fatigue and the lack of visibility, they bivied on this ledge for the remainder of the day and evening. 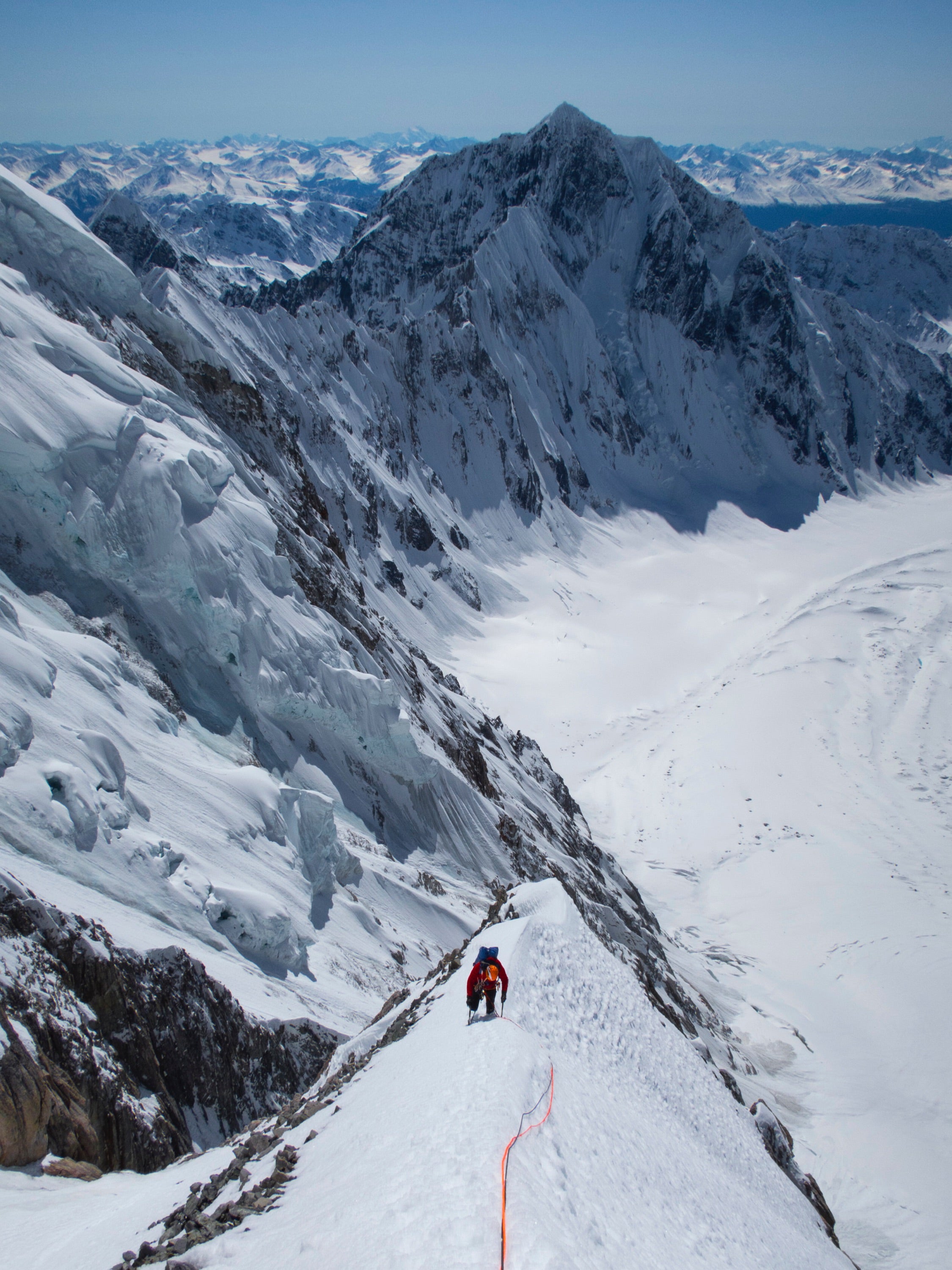 On the 15​the climbers once again started before sunrise and made their way up 200' of moderate snow to the summit of the peak under clear skies. As the sun rose over the range, they marveled at the stunning ocean of mountains surrounding them with Mt Logan, Mt Saint Elias, University Peak and the Atna Peaks standing predominate.

The rest of the day was then spent following the first ascent route down the Northwest ridge to a couloir that provided access to the glacier below. The 3 miles of ridge climbing proved stunningly elegant, reminiscent of sections of the West Ridge of Mount Hunter in the Central Alaska range. Reaching the couloir at around 1 pm the climbers waited until the evening to rap and downclimb the 4,000ft couloir to the glacier below. This section was unpleasant and rather dangerous due to the low quality of rock that comprised the walls of the couloir.

Finally at 11:30 pm, they reached their skis on the glacier below and at 12:30 reached basecamp exhausted and hungry. The following morning the weather was still fair but the forecast was deteriorating significantly, so they called Jay Claus for a pickup. He graciously came out nearly immediately and picked up the team, dropping them off in McCarthy in the early afternoon. Zimmerman and Wright rallied back to Anchorage and on home to Oregon. 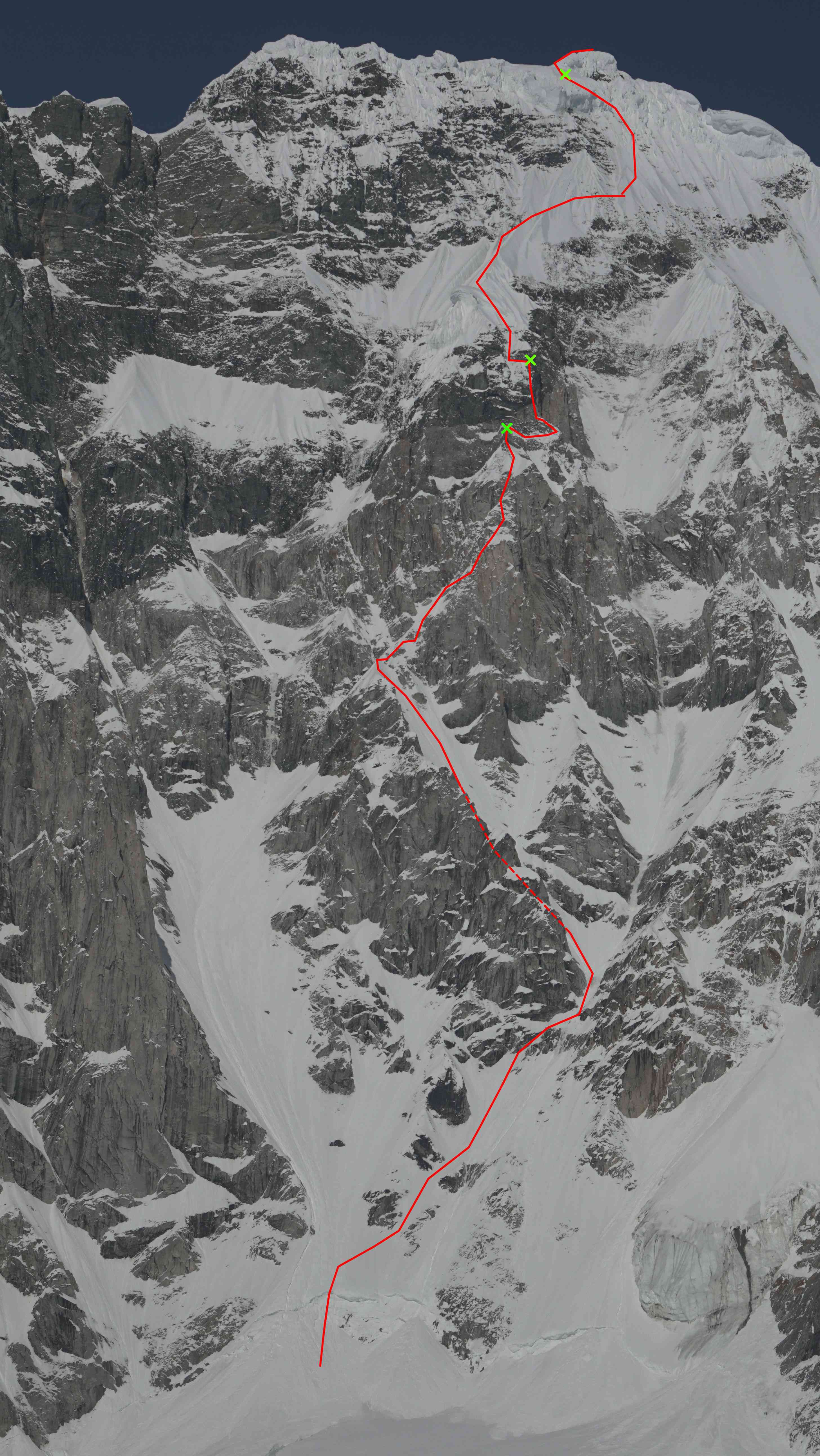 This trip was partially funded by the Mount Everest Foundation and the New Zealand Alpine Club with additional support coming from Outdoor Research, Julbo USA, CiloGear, Petzl, Picky Bars, Exped USA, Trail Butter, Scarpa, Iridium Communications and CW‐X. Transportation into the range was provided by the Ultima Thule Lodge, who proved to be a top rate operator. Forecasting on the trip was provided by Shannon McDowell and based on weather models from NOAA, yr.no and University of Washington. Zimmerman and Wright would like to express a huge amount of gratitude to all of these folks for their support and to their family and friends who support and encourage their climbing efforts.