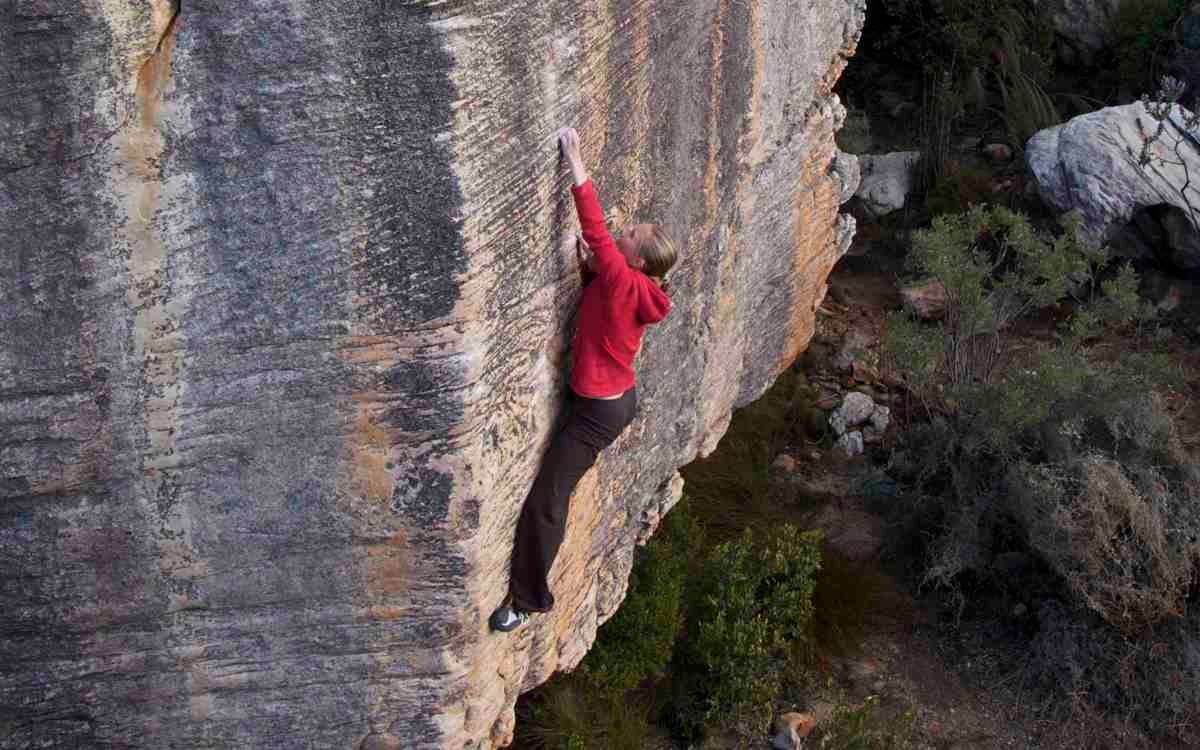 I recently had the privilege of teaching a clinic at Vertical World in Seattle to a group of fantastic women. Usually I’m pretty loose with my clinics, preferring instead to hear what people want to learn instead of telling them what they should learn. Projecting a route came up several times as a problem area. At this point in my climbing life I find projecting routes second nature. If I only climbed routes that I could do all of the moves first try, or that I could do in a day or two, my level would be well below my peak. However, it was a learned behavior for me and that I have refined over my decade and a half as a professional climber. I used to think that my onsight attempt on a route was my best effort, and after that it was all downhill. After much convincing, my friends got through to me that I should try something that was well above my onsight level.

My first real project was at Smith Rock called “To Bolt Or Not To Be.” It’s an iconic route that was first done by the famous JB Tribout back in the late 80s. I was a skinny sport climbing kid who could hang onto dime sized edges for hours. But throw any sort of power into a climb and I was flummoxed. To Bolt provided me with a big enough challenge and a steep learning curve on projecting a route. Working a crux, linking sections, memorizing moves; these were all things that I had heard of before, but never used. I became much more patient and learned to think of working a route as a journey.

I’m a natural problem solver. If my food doesn’t taste good, I want to know why, and make it better. If my dog won’t sit, I want to teach him to sit. If I can’t figure out a climb or a move, I break it down to the most minute detail to succeed, or at least dissect what I’m doing wrong.

Projecting a hard route is like doing a puzzle. If you look at the entire thing and try to stomach it all at once, it’s going to overwhelm you. However, if you work on it section by section, move by move, it’ll become more and more manageable.

Here are some tips for breaking through on a hard route:

If you are having a hard time on the crux, or you’ve reached a plateau on the crux, don’t work on that for a few days. Climb the part of the route that you can flow on. Work on getting that section as dialed in as possible, and learn to climb it with the utmost efficiency. Your goal is to be able to climb to the crux as rested as possible. Give yourself a chance to have “flow” back in your climbing.

If you are having a hard time doing a particular move, have your partner take some weight from you (either by giving you a push if it’s a boulder problem, or taking a little on the rope). This will help you get the movement down without having to do the exact move.

These same tips can be translated into numerous areas. I’ve worked with a lot of women who are afraid to fall, and who are afraid to work on falling. I try to teach them to break it down, and not to be embarrassed to approach it that way. Everyone learns at their own pace, and it’s best to stick with a method that makes it exciting to work on progressing, not afraid to. For working on falling: climb up to your bolt, clip it and fall with it at your shoulders (yes, you’ll be falling on top rope, it’s a good place to start). Next, climb until the bolt is at your stomach, and fall there. Just tell yourself, I’m only a little higher than I was last time. Then climb until it’s at your thighs, and so on. Progress six inches at a time, and pretty soon you’ll be a few feet above the bolt, but you’ll have acclimated slowly, so it won’t feel as scary.

Follow Beth's latest adventures and get more tips on taking your climbing to the next level on her Facebook page and through her blog.