Relics Of War—In The Dolomites And In The Heart 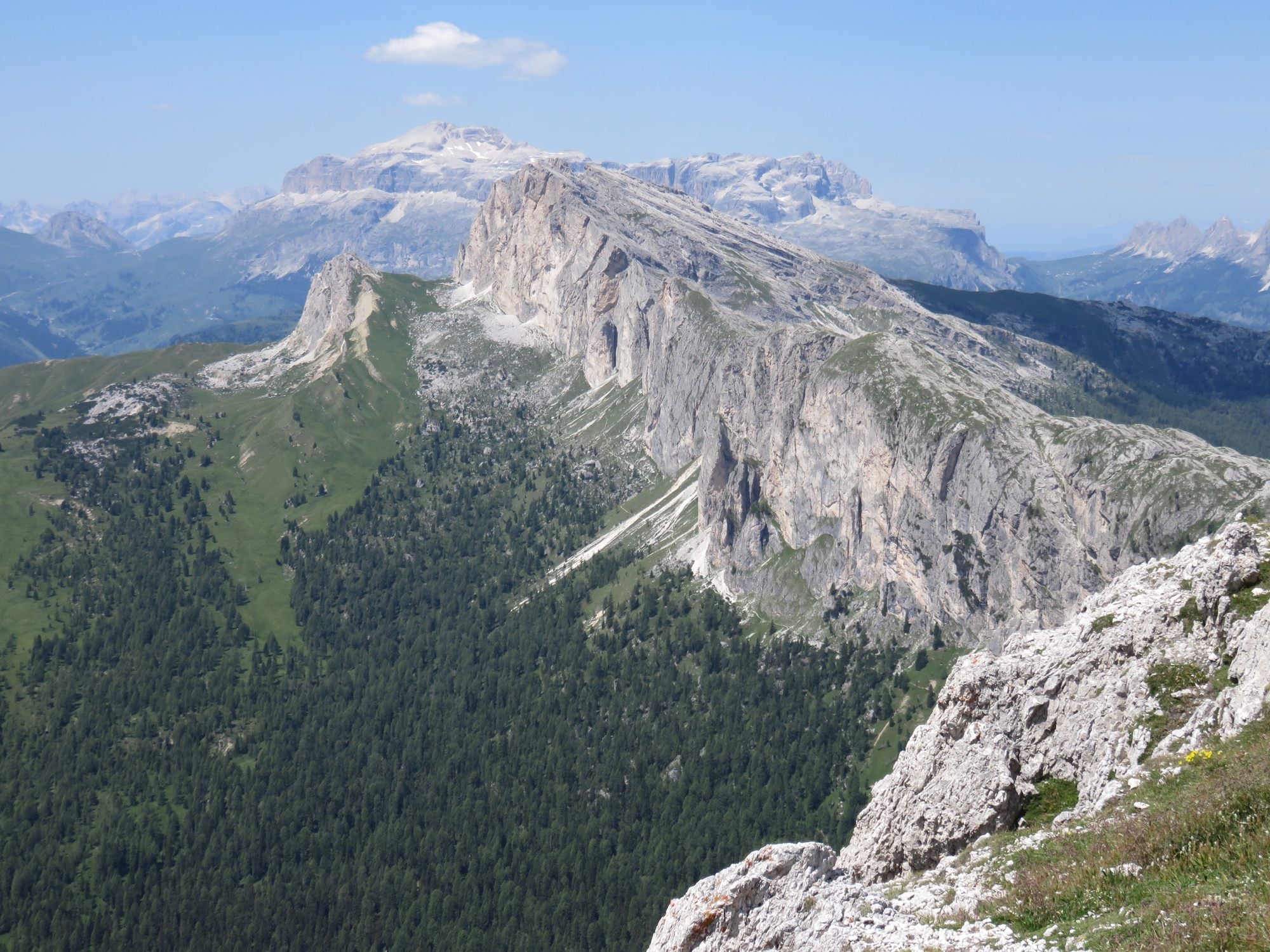 The Italian summer sun glares down on us, obscuring the uppermost Austrian positions. The cool walls of the trench offer a bit of relief from heat and we enjoy a momentary respite from our approach to the last covered position before the attack. I look down at my watch: almost 10. Around me, the members of my team ready for the assault, quietly joking while carefully double checking their kits. As with our previous objectives, my strength and will grow a bit from their humbly confident demeanor. There is no one else I’d rather have with me for what we are about to do. We are traveling light, having left all but the most essential gear behind near the Italian Army camp below. I chance a quick look at our objective. The Castelletto, true to its name, resembles an angry, terrifying fortress stabbing upwards from the side of the Tofan di Rozes. The Austrian position atop this Schrekenstein is all that stands between the Italian Army and the road north to Austria. It's time. With a silent nod we go over the top. I shout the perennial battle cry, “You are on belay!” 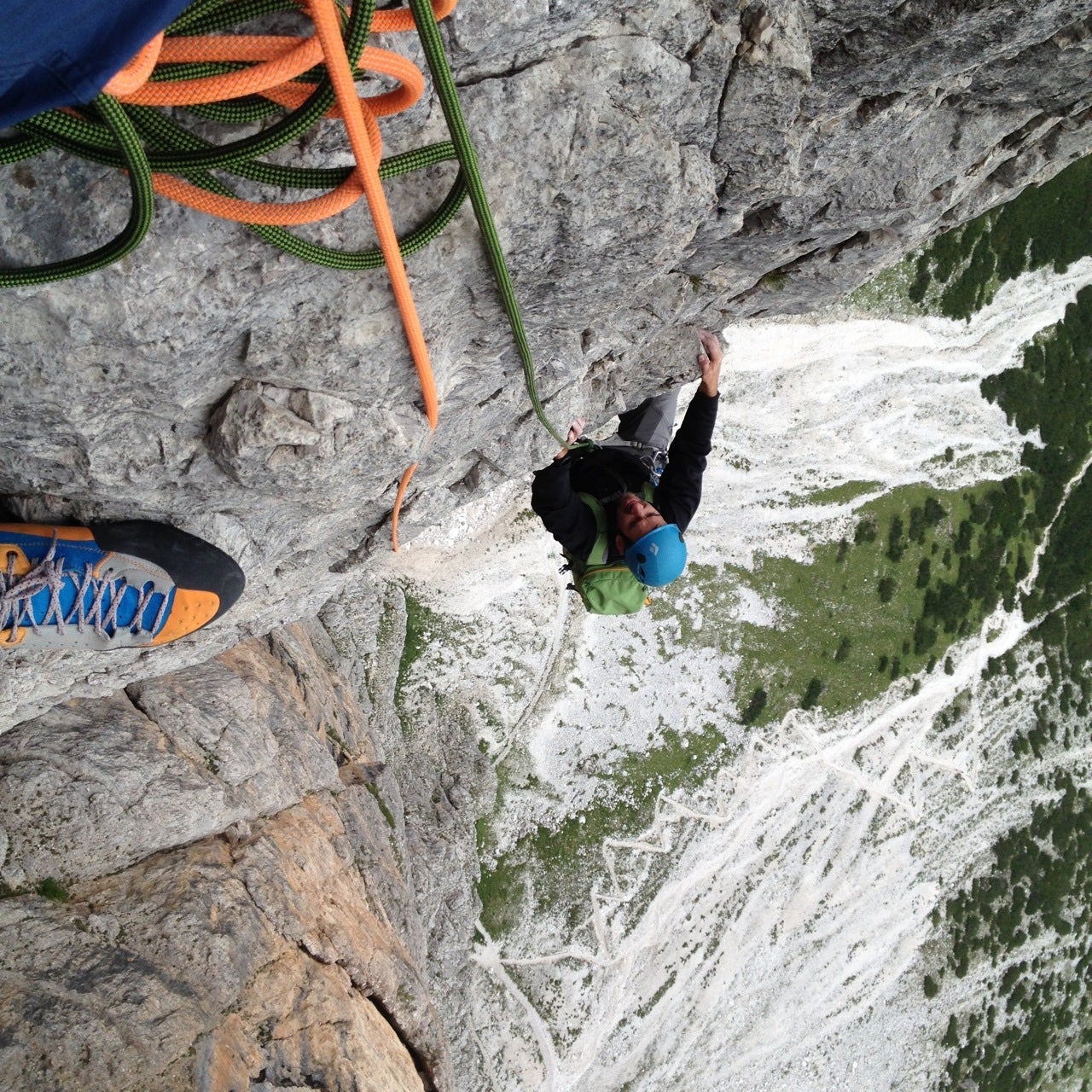 June 2016 marked the centennial of one of the most fascinating struggles of World War I. One hundred years ago, a young Italian nation attempted to break the stalemate with the dying Austria-Hungarian Empire with an offensive west of Cortina di Ampezzo in the blurred border of the Italian Vento and the Trentino-Alto Adige/Sudrirol. The offensive would begin with an assault on the Austrian position guarding one of two major passes leading north to the imperial heartland. All that stood in their way was a tiny garrison of approximately 30 Austrian Kaiser Jeagers—Mountain Troops—desperately clinging to the Castelletto, a small, castle-like formation jutting from the Western face of the Tofana di Rozes. (It’s also famous in more modern stories, as it serves as the backdrop for the final fight scene between Sylvester Stallone and John Lithgow in Cliff Hanger.) For months, this tiny garrison of mountain troops comprised mainly of Tyrolian mountain men held out against numerous assaults by Italian Alpini, often numbering 10 times their size.

The Italians, having been thwarted at every attempt to take what the Austrians called the Schrekenstein—or terror rock—began a months-long effort to bore through the mountain with the ultimate aim of annihilating the Castelletto with a subterranean mine—a siege tactic first developed when gunpowder brought the Middle Ages to an abrupt close. The terrible explosion and the resulting fierce fighting around the contested remains of the Austrian battle position is a testament to the horrible futility of the alpine front during WWI. 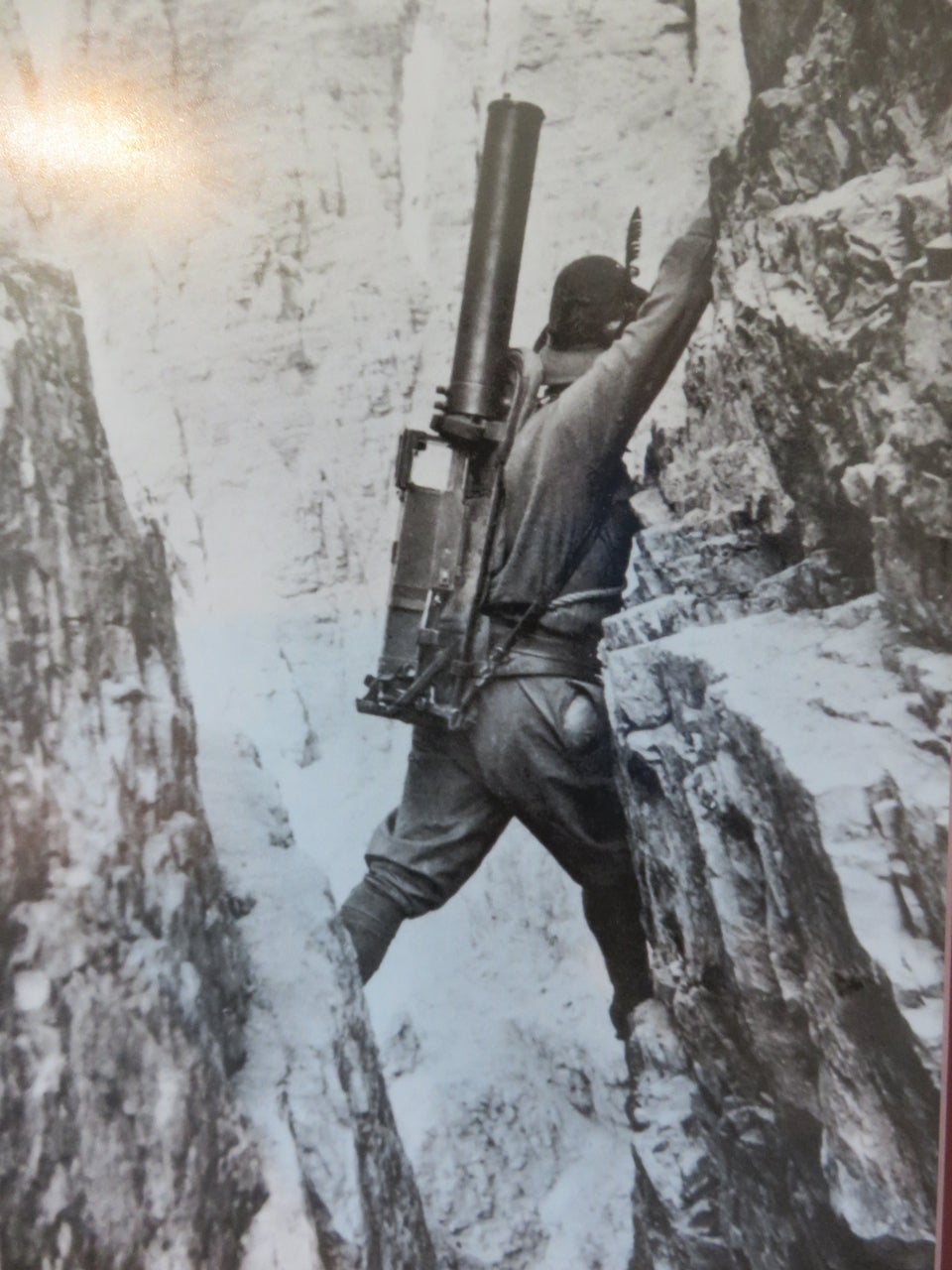 As a veteran of the Iraq war, the larger-than-life tales of war have always interested me. While the epic scale of the struggles has kept me buried in a book many an evening, it has always been the individual soldier’s story that has compelled me the most. The titanic movement of nations toward victory or oblivion has always been of secondary interest when compared to experiencing war through the eyes of the common soldier. A lowly infantryman myself, I feel a common bond with the average soldier through centuries of war. War hasn’t really changed much over time.

One aspect of war that has remained timeless is that the fighting rarely ends for those involved. Since Homer first told the story of Troy and Odysseus’s long journey home, humankind has struggled with the long-term toll that war takes on the minds and bodies of the soldiers who fight it. Upon leaving the Army after three tours in Iraq, I joined the ranks of these warriors. I never quite came home, and the war never quite ended for me. I was lucky enough to take the step into the mountains where I continue to find strength and purpose to this day.

With this in mind, Chris Simmons, Brian Mockenhaupt and I set out in the summer of 2015 to discover these soldier stories and navigate the legendary mountain terrain on which they fought. This was to be the first of our new project that focuses on the nexus of historical and outdoor exploration. 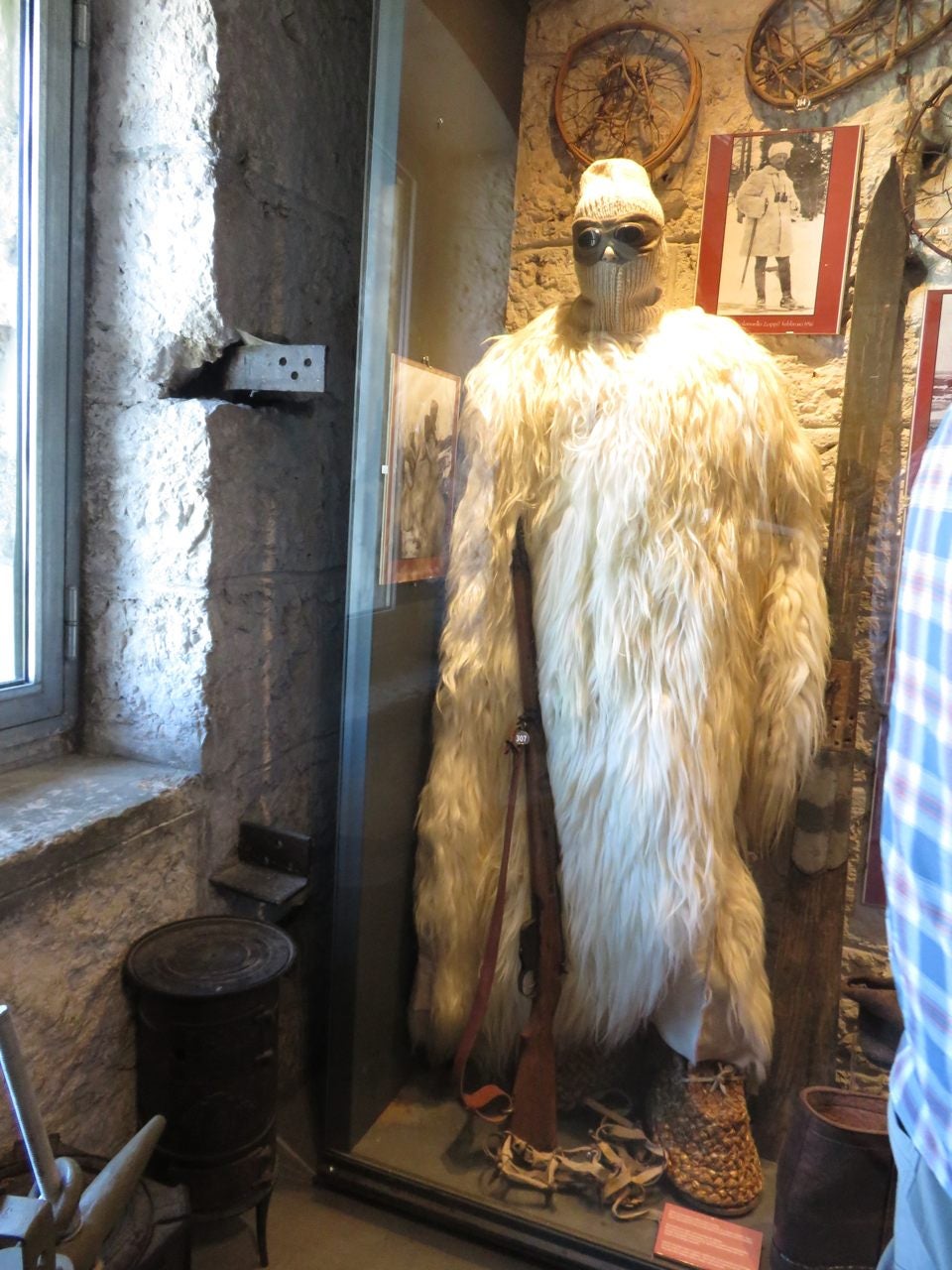 Over the course of our journey, we would cross paths with historians, archaeologists, and even the descendants of those who fought in the alpine war. Veterans ourselves, we were able to reach out across the centuries to see the battle almost firsthand through the eyes of those who fought on the ground through a dark melding of their words, the terrain and through our own martial experiences. All of this was made serene by climbing the soul-pleasing lines of the Dolomites. If you have not been there even just to wander, the best comparison I can give is to lay our own haunted Civil War battlefields atop the North Cascades or Yosemite. Throw in an endless supply of good food and wine and the hospitality of the numerous beautiful people and regional cultures, and you will begin get an idea of what this place is like.

We're a bit tired from several previous climbs around the area, so we decide to link the Italian mine tunnel with a gorgeous via Farrata traverse around the mountain, hoping to get a glimpse at what the men of both sides felt. We emerge into the sunlight at the rim of the manmade crater. This is one of the routes that a company of Alpini used in the initial assault. As had happen so many times before, the attackers rushed into the center of the crater only to be cut down by the machine gun fire of stunned defenders. Adding to the nightmare, the explosion burned all of the oxygen in the immediate aftermath resulting in the asphyxiation of the brave but hopeless Alpini. Sitting on the edge of the crater, I began to get that all-to-familiar feeling that men fought and died here. 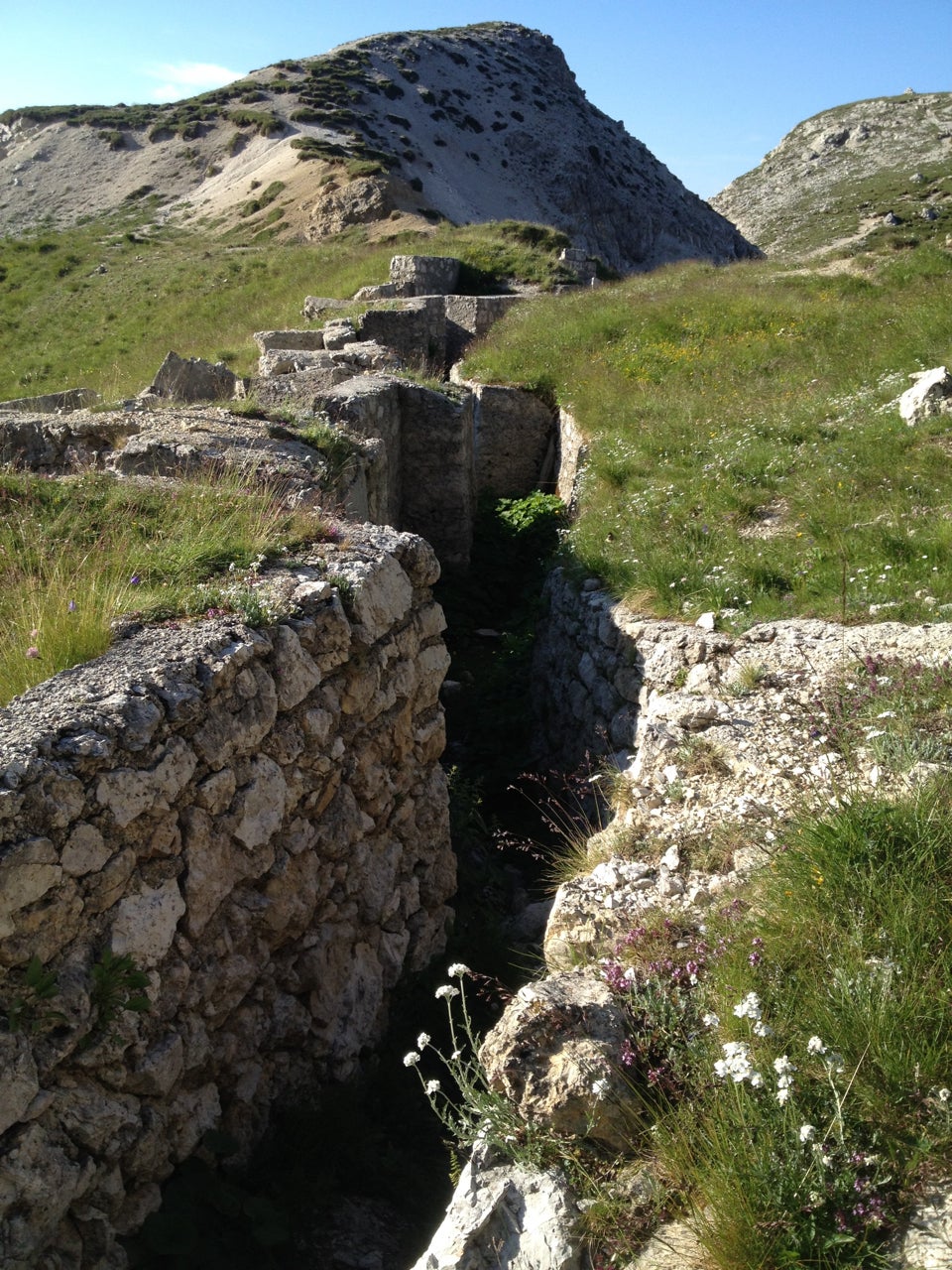 As we make our way up to the Austrian positions, Chris spots a dank hole. It must be the entrance. Slapping on a layers and headlamps, we descend into the cramped mine, becoming spelunkers, just like that. I feel my nervous energy rise. I love exposure, but caves give me the willies. I can only imagine how suffocating it was for the defenders as they clawed their way out of the rubble to desperately hang onto to what was left of their little castle. We round a corner and walk straight into the Austrian barracks. Cheap wood and tarpaper walls divide small bunks. The sudden realization that I am connected to these men washes over me. After weeks of climbing their rocks, exploring their history, and living in their country, something as simple as wooden bunks is the catalyst that brings our lives and our wars together. This tangible reminder of the simple stuff of war makes me realize that nothing has changed for us.

Beyond the climbing, the history—and yes, even the wine—the war-ravaged Dolomites provided me with something unique. In reading the words and walking the trenches of the men who fought, I was able to reach across time and meet them. Standing there next to theses simple wooden bunks, the war-weary faces in black-and-white photos were transformed into living, breathing men. I felt their fear as they lie in that rocky hellhole for the inedible assault to come. I recognized the horrible comfort in hearing the Italians mining below, knowing that as long as they were digging, there would be at least one more day before meeting death at the hands of the mine. As I walked the blast crater, I knew their terror as they were pinned down by Austrian machine gun fire as scores of men around them succumbed to asphyxiation due to poisoned air resulting from the blast. I understood their anger as they were led to the slaughter by incompetent high-ranking officers in a part of the Great War that had few discernible objectives. Sadly, “lions led by donkeys” is as true a statement today as it was then. 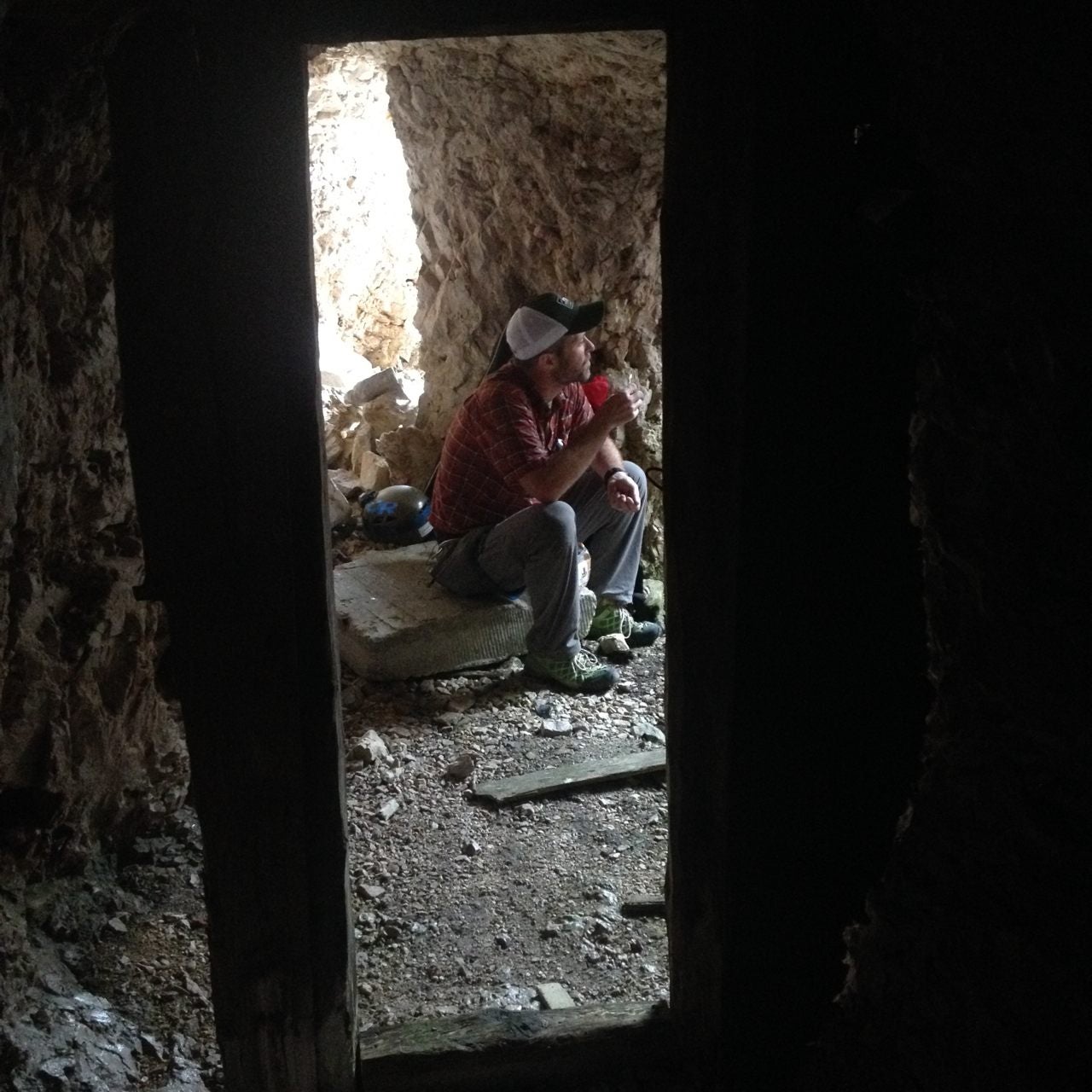 For years, my fellow soldiers and I have lived apart from the society for which we fought, never to completely come home from war. In the Dolomites I realized that we were not alone. I knew these men and found that they would know me. They taught me that war and those who fight them have not changed, and they welcomed me into their ranks with open arms.

The author Brian Mockenhaupt brilliantly tells the story for the Castelletto in the June Issue of Smithsonian. You can read it here: http://www.smithsonianmag.com/history/most-treacherous-battle-world-war-i-italian-mountains-180959076/