Rethinking Attitudes Toward Bears After A Fatal Attack

I was ready to riff on my recent bear encounter by conjuring images of Yogi, Boo Boo and pick-ka-nick baskets until the revelation that, the very same day, a Yellowstone National Park ranger discovered the remains of a Montana man killed by a grizzly bear. The body was partially consumed and cached, and the park later captured an adult female grizzly, identified it as the killer of Lance Crosby, 63, and euthanized it. Two cubs also were captured and will be transferred to the Toledo Zoo.

It’s a sobering development and either skews the viewpoint of my experience or puts it into perspective.

People seem to be of two minds when it comes to bears in the wild: They’re viewed as the vulnerable and entertaining Mr. Ranger, Sir antagonists, or the bloodthirsty monsters from Werner Herzog’s unsettling documentary Grizzly Man, the more recent horror flick Backcountry or, of course, the terrifying incident at Yellowstone on Friday.

I landed somewhere between the extremes when a black bear cub bounded up from the banks of the White River, near where I was taking photographs about a third of a mile past Glacier Basin Camp. It trotted across the trail, stopped and sat up, as if to pose. It was maybe 10 yards away. I might have been eating a piece of cheese.

Though I am a photographer, my first instinct was not to grab a camera and start clicking away. My first thought was, “Oh, sh*t,” then, “Where’s Mom?” Where there’s baby bear, mama bear isn’t too far behind. I waved my arms and urged the cub to move on. It complied, but wasn’t in much of a hurry.

When, minutes later, I heard a loud, long whistle, I wondered, “Marmot?” But I immediately saw the couple, down the trail toward the campgrounds, waving their trekking poles. I waved back. The guy pantomimed claws with his hands. Bear. Then he spread his arms apart and mouthed: Big Bear!

Until that morning I felt the same kind of disappointment I felt a few years back, when I defied warnings against visiting a gang-infested part of South Central (now just South) Los Angeles for a story, and nothing happened. (That is, until I stopped one last time and someone stole the iPhone out of my rental car – right next to me). I’m constantly in wilderness areas where I could have seen bears, but never did. I was starting to feel left out and unlucky. 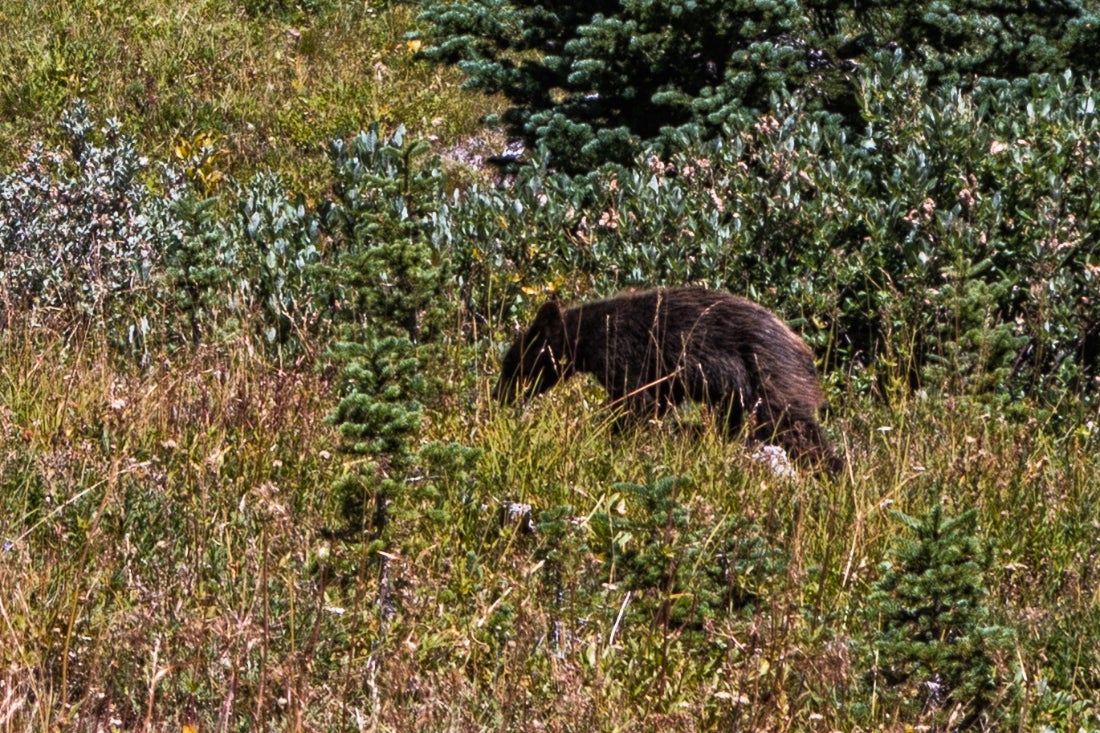 The last time I’d seen a bear “in the wild” was nearly 12 years ago, on the way to my wedding in Tofino, B.C., Canada. On Vancouver Island, which has one of the most dense populations of black bears in the world, I spied a mother and two cubs up ahead on the highway. My bride-to-be slowed the car but, as I readied my camera, she became unnerved and suddenly peeled away. I otherwise saw bears on the trail and heard them sniffing outside my tent while I was in the Boy Scouts, or on roads or parking lots on family vacations to places like Crater Lake and Banff National Parks.

I had a strong premonition about seeing bears last week when I pulled into the White River Campground parking lot. I checked my pack for the can of bear spray I usually carried. I’d left it at home. When I reached Glacier Basin Camp, a Korean tourist gestured angrily at a sign with his camera. “Bear Activity,” the sign warned. “Travel with Caution.”

“They didn’t post this information at the trailhead, did they?” the man asked. They did not, I agreed, but told him it was advisable to check in with rangers before hiking anywhere even remotely remote. They likely would have told him what I already knew – there are black bears up in Glacier Basin.

My premonition was raging. As I continued on the unmaintained, climber’s trail to St. Elmo Pass and a glimpse of Inter Glacier, I thought about breaking out bear bells, which I hadn’t forgotten. But I figured the bells would easily be drowned out by the roar of the White River. Besides, if I were being honest, I was more afraid of encountering other hikers who judged me a wimp than I was about running into bears.

I wasn’t too ashamed, however, to clap my hands and sing. For some reason, Sister Sledge’s “He’s the Greatest Dancer” was stuck in my head. So I went, “Wow …” Luckily, the bears up there are not of the dancing variety. I also looked for tracks, scat and signs on trees, as I have been taught (thanks, David Moskowitz). Nothing. I stopped to take internals of the moving river and clouds. To kill the time that took, I set up my little Sony for some iPhone-controlled selfies.

That’s why I didn’t have the equipment to get anything better than a shot of the cub that resembles the iconic but poor-quality Sasquatch-lumbering-in-the-wood photo people trot out as definitive proof of Big Foot’s existence. That’s also why I easily could have missed the bear. A chipmunk popped up behind my point-and-shoot and carried my gaze to about where the cub popped out.

Last fall, when I expressed reservations about running into bears near Enchanted Valley in Olympic National Park, a ranger retorted, “You should be so lucky!”

Seeing that cub on Friday didn’t make me feel very lucky, especially with a pair of hikers gesturing wildly about its mother moseying up my way. Part of me knew the situation was not desperately dangerous; Mount Rainier National Park has no recorded bear attacks in its history. And black bears aren’t predatory, the way grizzlies can be. On the other hand, no use being stupid. Solo hikers, like the one at Yellowstone, are prime targets because they’re too quiet and can startle unsuspecting bears. With the White River beside me, brush on the other side of the trail and a trail to glaciers behind me, I didn’t exactly have any great escape routes.

I’m pretty sure I reacted correctly, if not courageously. But it’s an accomplishment on par with, say, beating a 10-year-old in one-on-one basketball. On the way back to my car, I ran into a couple who’d witnessed the commotion about the bears.

“Did you get a picture?” the man asked, nodding at my abundant photographic equipment.

That’s when it hit me: I saw a (very cute) black bear cub, and all I got was this stupid photo.