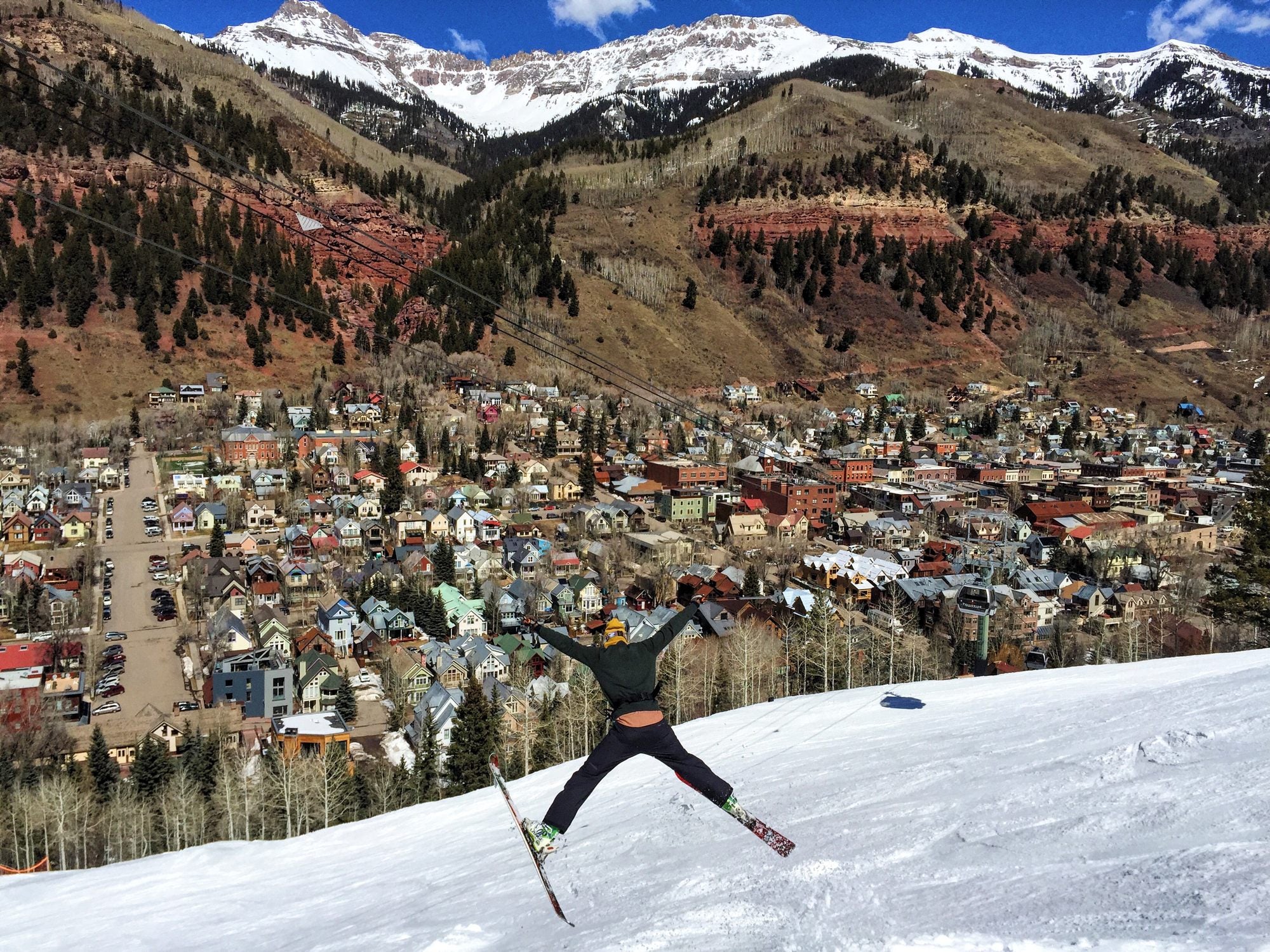 “I would hope Telluride stays cool and funky, and keeps our uniqueness that we have, because we’re a mining town that was founded by hardcore miners. We are not a posh place for people to come and buy fur coats and dillydally in fancy restaurants. This is a skiers' mountain and a skiers' town, ya know? That’s what we’re all about.”

Rasta Stevie, a Telluride Town Council Member at the time, spoke those hopeful and oddly prophetic words in Greg Stump’s legendary 1988 ski film, Blizzard of Aahhs. Telluride, like ski towns all over the U.S., is currently experiencing the harsh reality of an expansive divide between the haves and have nots, the ski bum locals and the second—sometimes third—homeowners. The income gap is not a tiny fissure but a canyon. A single job providing a livable wage is a rarity. In place of affordable ski bum chalets, mega-millionaires have erected faux-log palaces that are uninhabited for 50-weeks a year. Yet, despite Main Street’s infiltration of the uber-wealthy, Telluride’s “skiers' first” spirit refuses to be appropriated. 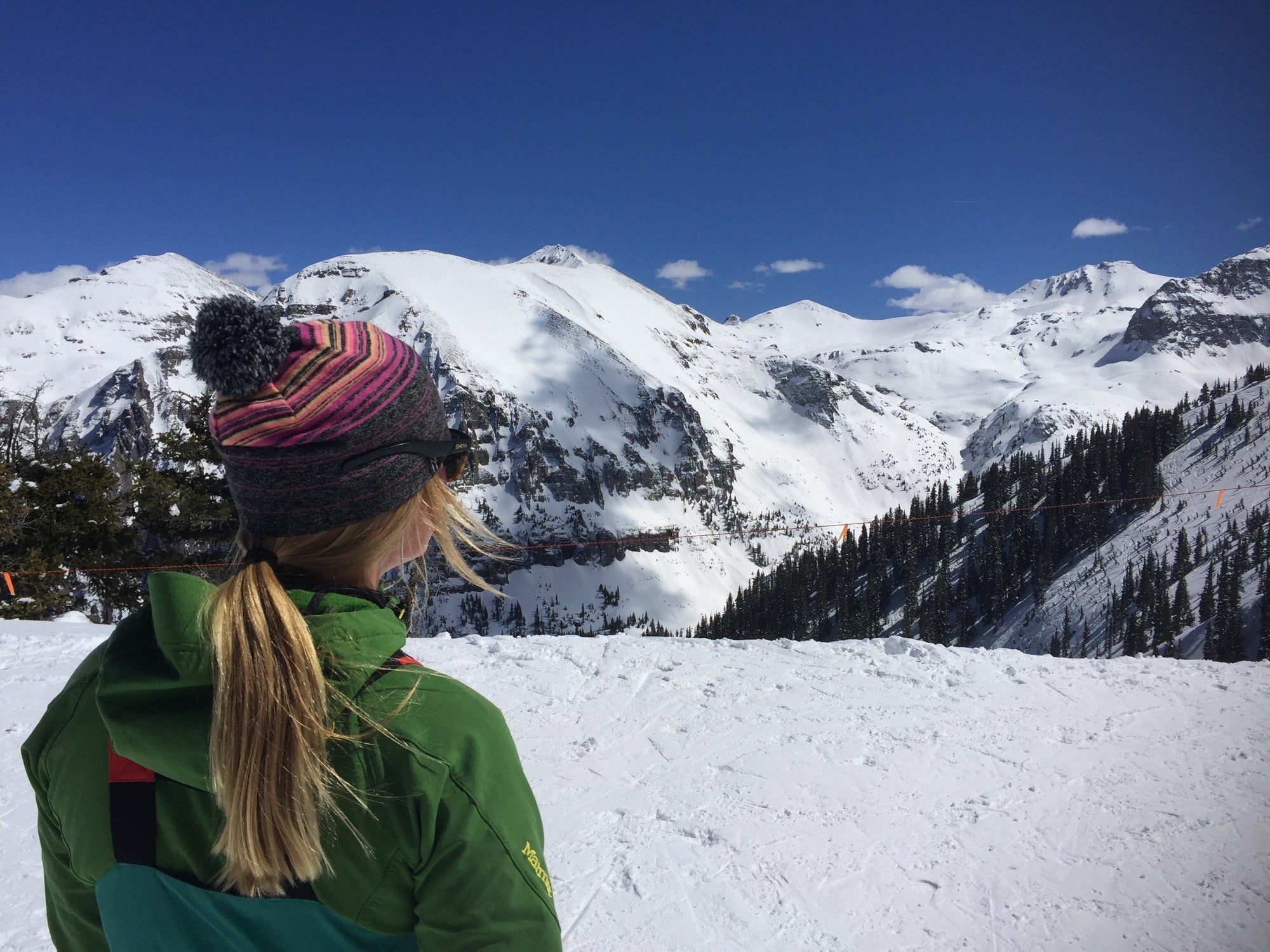 I moved to Telluride in the fall of 2007 after falling in love with the town during a ski trip the previous spring. I sat on a chairlift next to my two best friends from college when we stumbled upon the idea of relocating. Scott and I were visiting our buddy Adam, who booked it to Telluride right after graduation and started living the dream, skiing all day-every day and grooming the slopes at night. To Scott and I, who were unhappy living with our parents once again and bored with jobs that offered us a career path we didn’t want, Telluride represented an escape from the Midwest doldrums. The San Juans are asperous giants that dramatically tower over the town at 13,000 feet. Snow lay upon their dark shoulders in swaths like thick silken scarves. The mountains lured me but I resonated more so with the inclusive locals and the towns vibrating adventurous and lighthearted soul.

Adam seemed to know everyone and everyone in town seemed exciting and interesting. The ski bum natives always smiled, gave a hug rather than a handshake, and talked fast and animatedly about skiing, biking, climbing, and other mountain adventures I had previously only read about or seen in movies. Our trip was a mere three days but in my mind it stretched far longer. Time in Telluride is pregnant with experience and, at 23-years-old, life for me seemed to be fuller there. I had Peter Pan-itis. Skiing steep faces fed my desire to assert my manhood while it simultaneously allowed me to play GI Joe’s forever. On our final ski day, the sun skipped through the aspen trees as we ascended on Chair 10. “We should move to a town like this. I mean, wouldn’t it be great to live in a town like this, to hang with people like this. We should totally move to a town like this…why don’t we move to this town?” So, we did.

“The mountains are what brings everyone here, from the rich to the Rastas. The spirit is in the San Juans. That gets us here, but the community and funkiness keeps us here,” says born-and-raised local Galena Gleason. Her father, Bob, made Telluride his home after becoming enamored with the surrounding mountains in the late 1970s. He opened Bootdoctors, an outdoor sporting goods store, in the 1980s, and raised his daughters to reflect the town’s carefree but rugged nature. Kelli, his youngest, skis hard and fast, typically while wearing a pink tutu or a superhero costume she retrieved from one of her father’s several party-fare trunks. Galena’s son is less than a year old but head banged with concertgoers this summer when Pearl Jam played Town Park. He too enjoys wearing costumes during mountain adventures like raft and ski trips. 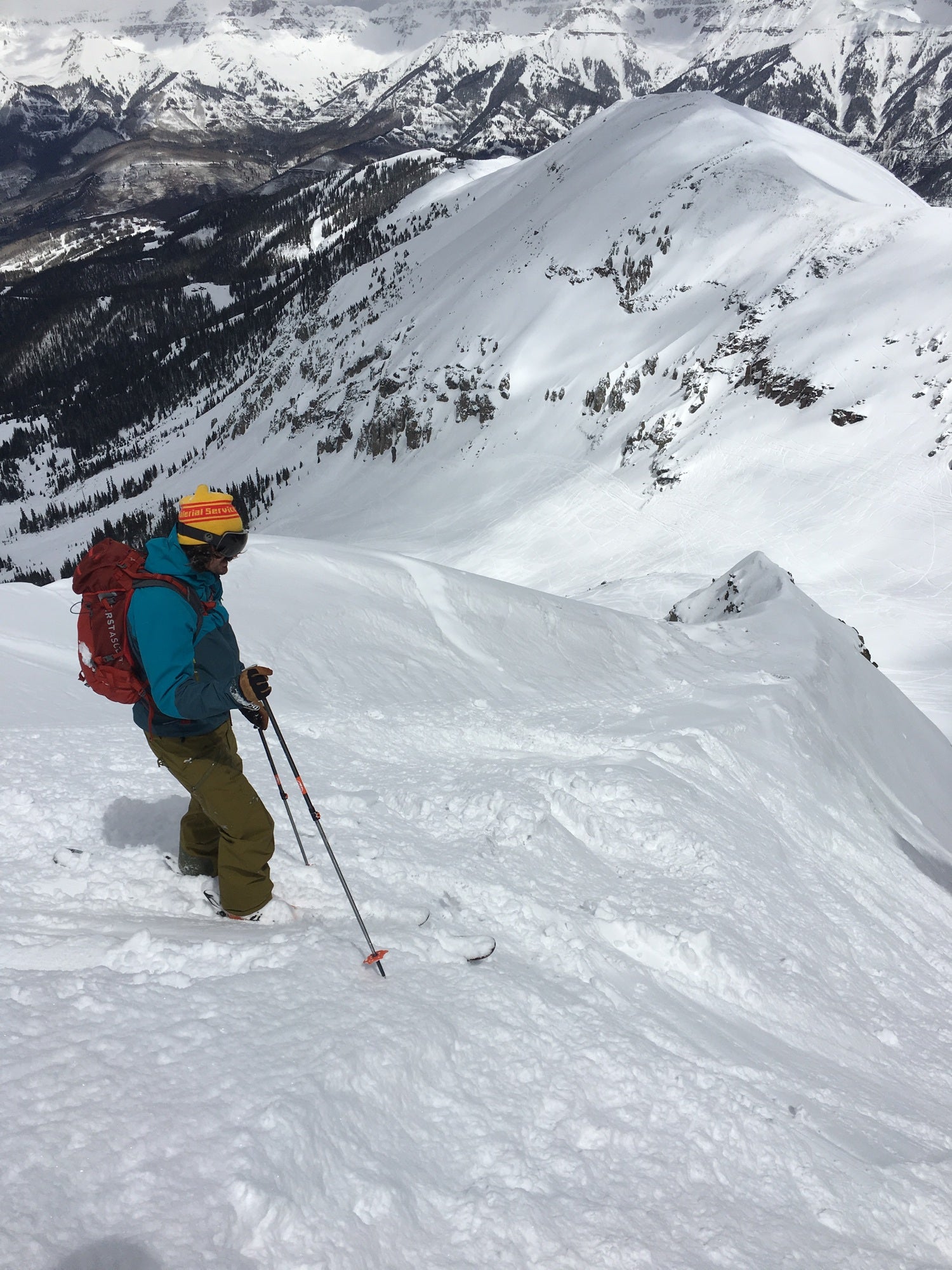 The lifts started to turn in 1972 but Telluride has long been known as a hamlet of freethinking, counterculture, and hardy mountain people. Mining came to Telluride in the early 1800s, and with it skiing. On payday, Swedish and Norwegian workers skied down from Tomboy Mine in order to beat their non-skiing American counterparts to the best whiskey and prostitutes. When the mines ran dry in the 1960s and 70s, the economic focus shifted to snow and tourism. But since the town was declared a National Historic Landmark District in 1963, Telluride’s character, look, and ultimately it’s identity was insulated from overdevelopment and commercialization.

“The location, the architecture, the culture, this town’s got everything you don’t see in Denver, SLC, or even Jackson—the hippies and the endangered ski bums,” Galena says. “It’s authentic. People are really here for the skiing; the gnarlier the better. We ski on piles of scree and we like it!”

Pete Dahle is a true Telluride skier to his core. He has worked almost every ski bum job Telluride has to offer—dishwasher, ditch digger, ski patroller, part-time herbalist—just so he could spend his days pursuing his two-planked passion. He moved to Telluride in 1988 and jokingly declares himself now as a hardened, crusty local. But he smiles and laughs when he talks about the town, the skiing, and even when he laments about “what it’s become now, man.” 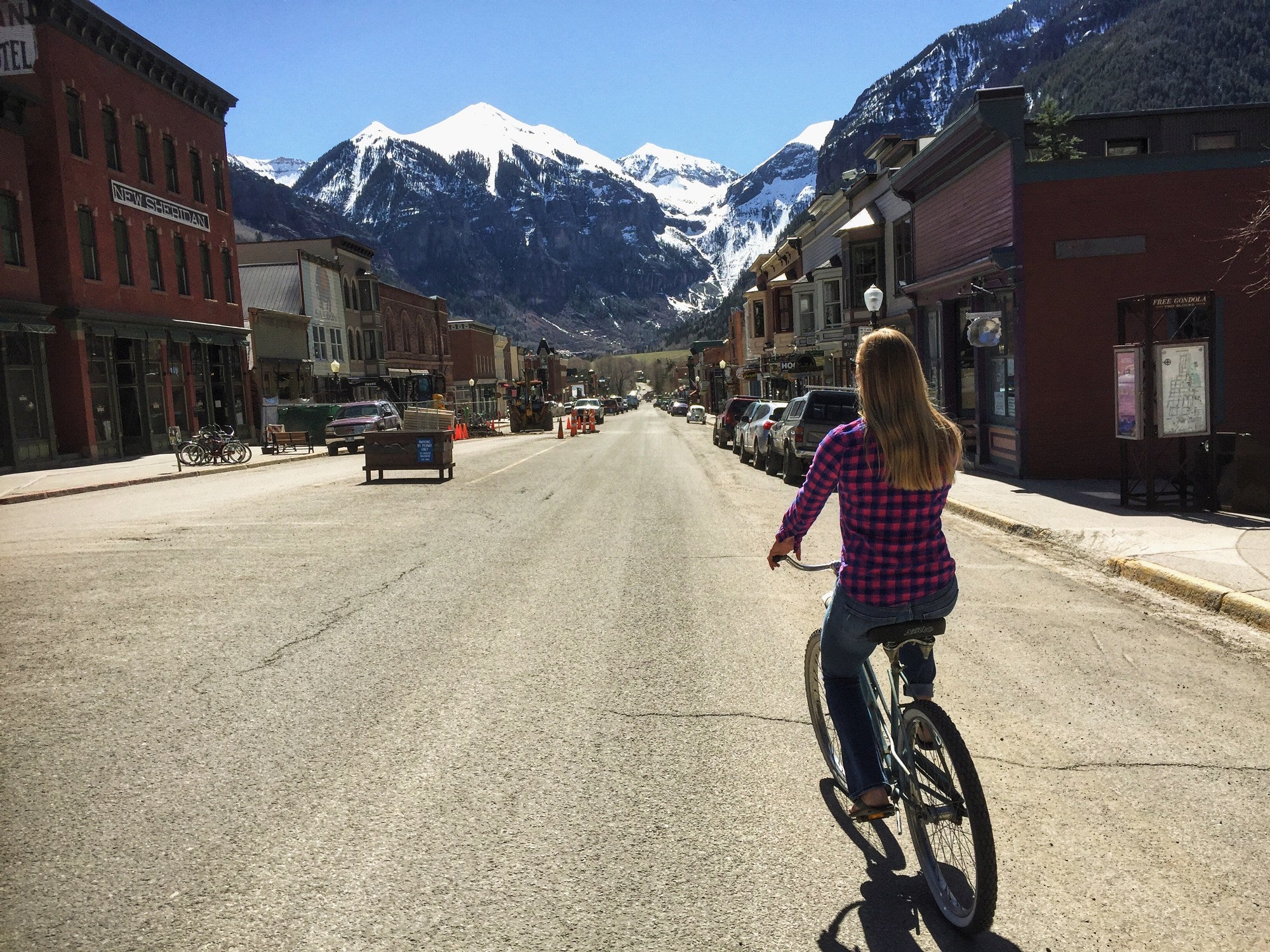 Of Telluride, Pete says, “It’s unlike any other place anyone has ever been. This place is the best there is for anybody and for any reason.” His stories of the good old days are folkloric. According to Pete, skiers back in the day had to prove their proficiency on inbounds terrain like the Spiral Stairs and wash at least 3,000 dishes before being allowed into the backcountry. The Telluride ski posse was more like a cult back then, made up of pro athletes, peak baggers, epic skiers, and the spirits of old miners. Pete says the best, deepest run of your life was always just around the corner. “We became superhero’s here, man,” he says. “Telluride is a precious entity. It’s not necessarily for mass consumption. It’s better whispered than shouted about.”

Pete is protective of his Telluride, a feeling that comes from a self described jaded throne of hindsight. But his cynical retrospection is overshadowed by the love of his home. What it has been in the past—the feeling, the heart, the community, the funky culture—Telluride is still and will be into the future. “All you need to know about Telluride, Rasta Stevie said in Blizzard of Aahhs,” Pete says. “And it’s all still true, even with these well dressed fakers faking it on Main Street.” 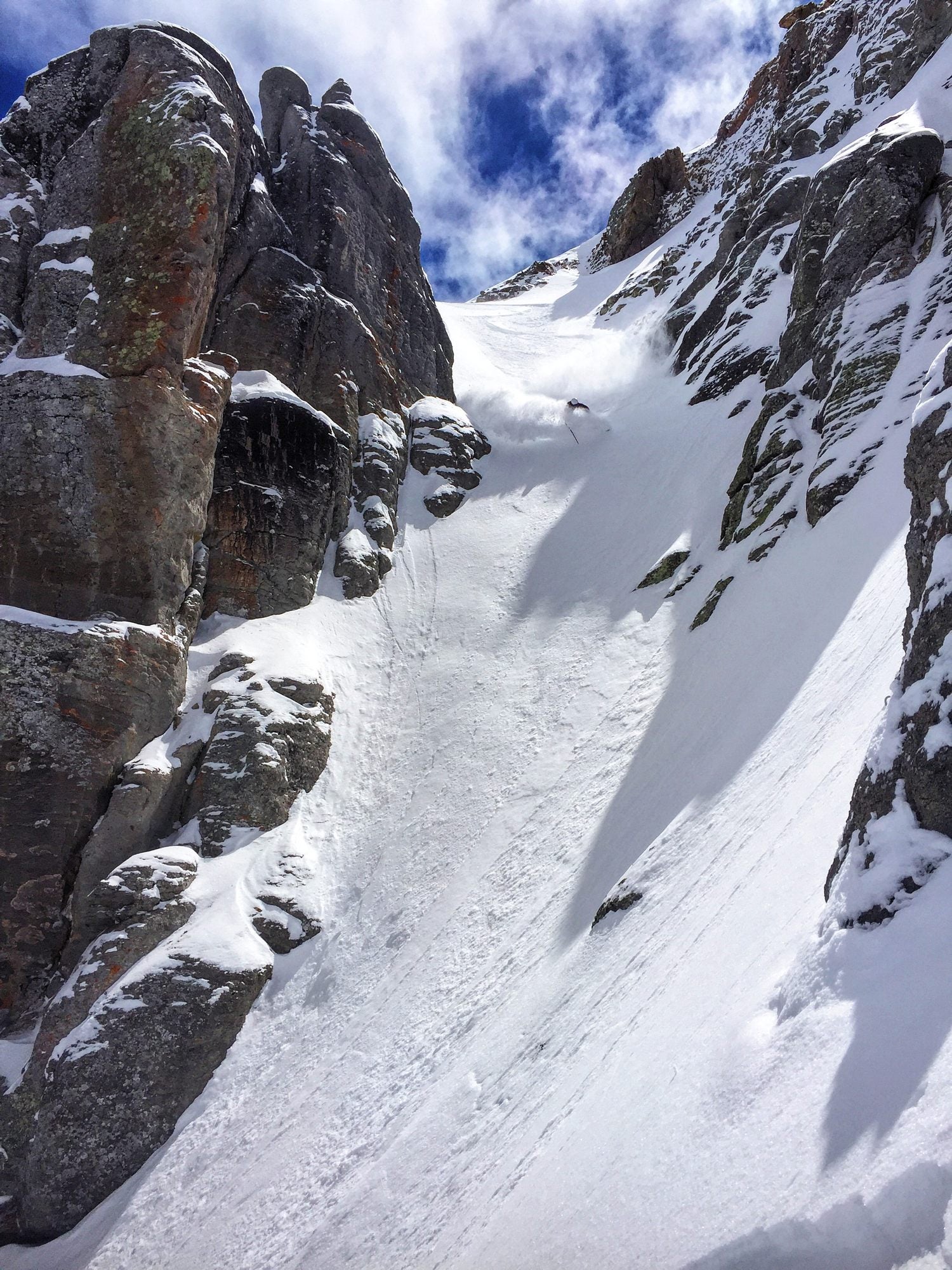 Change is an inevitable function of time and, for better or for worse, Telluride is experiencing a transformative period. In 1988, Rasta Stevie said he would hate to see Telluride consumed by the affluent: “I’m tryin’ to prevent Telluride from becoming this world class, snooty, ritzy place where only the rich and the affluent can live, ya know? … You’ll go to the Last Dollar Saloon and you’ll see a bunch of rich dweebs lookin’ around at each other, goin’ ‘where is everybody? I thought this place is cool and funky.’ Cause we’re all gone and, when we’re all gone, it’s just gonna be another sell out ski area.”

There are fur coats on Main Street these days and the well-to-do flex their piggybank muscles at swanky restaurants with white linen tablecloths. But greasy haired, goggle-tanned skiers serve them their steak dinners. Ski bum chefs, who clock in while still wearing their ski boots, prepare their meals. A dready snow god drives the town’s bus. Skiers boot up in the back of their Tacoma’s, which, in some cases, is their home. And Mak-M-Stairs-Plunge is still a right of passage for acceptance into the local tribe. There may be more snooty noses in the air today but the feel of Telluride’s unique funkiness will never disappear or change. It can’t. We won’t let it.