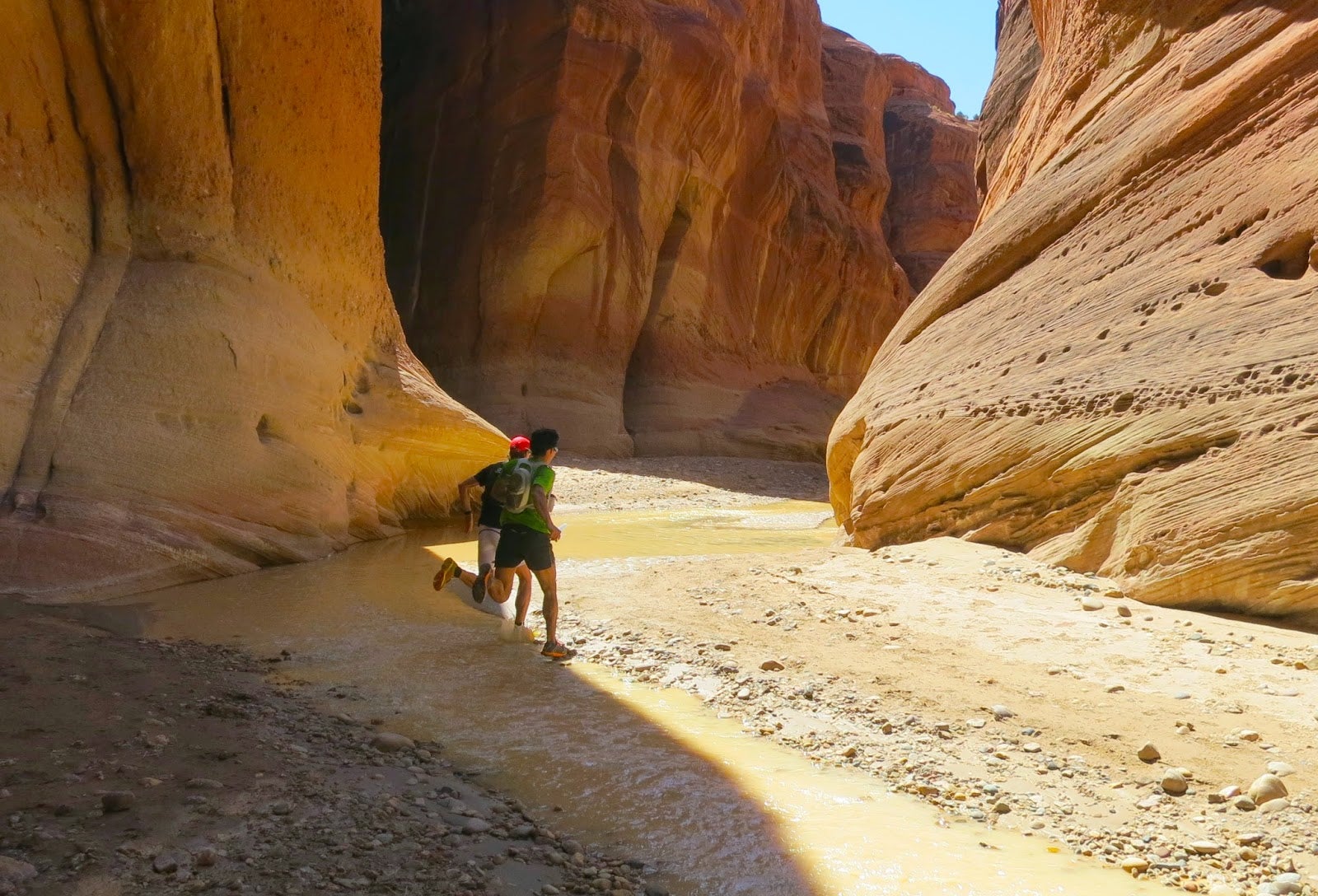 After a strange winter, it's now adventure skiing season. Unfortunately, my planned work break and the weather didn't line up to attempt some projects outside the Wasatch. So instead, I've been running as much as my feeble legs allow, and this week Jason hatched the idea of going on an adventure run in the desert.   Jared suggested Paria Canyon amongst others, and after a little googling we decided it looked worthy.

Jason drove down with his sweetheart early on Thursday while Tom and I left SLC at 10 p.m. in order to stay with ours until we couldn't any longer. By 2:30 a.m. we were regretting our late start while looking for a roach motel in Kanab.   Six short hours later, we were donning our gear and packing gels and stuffing our bellies with doughnuts and other junk to ready for a long day. We picked up Jason and drove the 40 miles out of town to the trailhead, where the scenery looked quite disappointing. Across the highway, there were desert towers, plateaus, and canyons. But on our side there was a trickle of water and some sage brush. 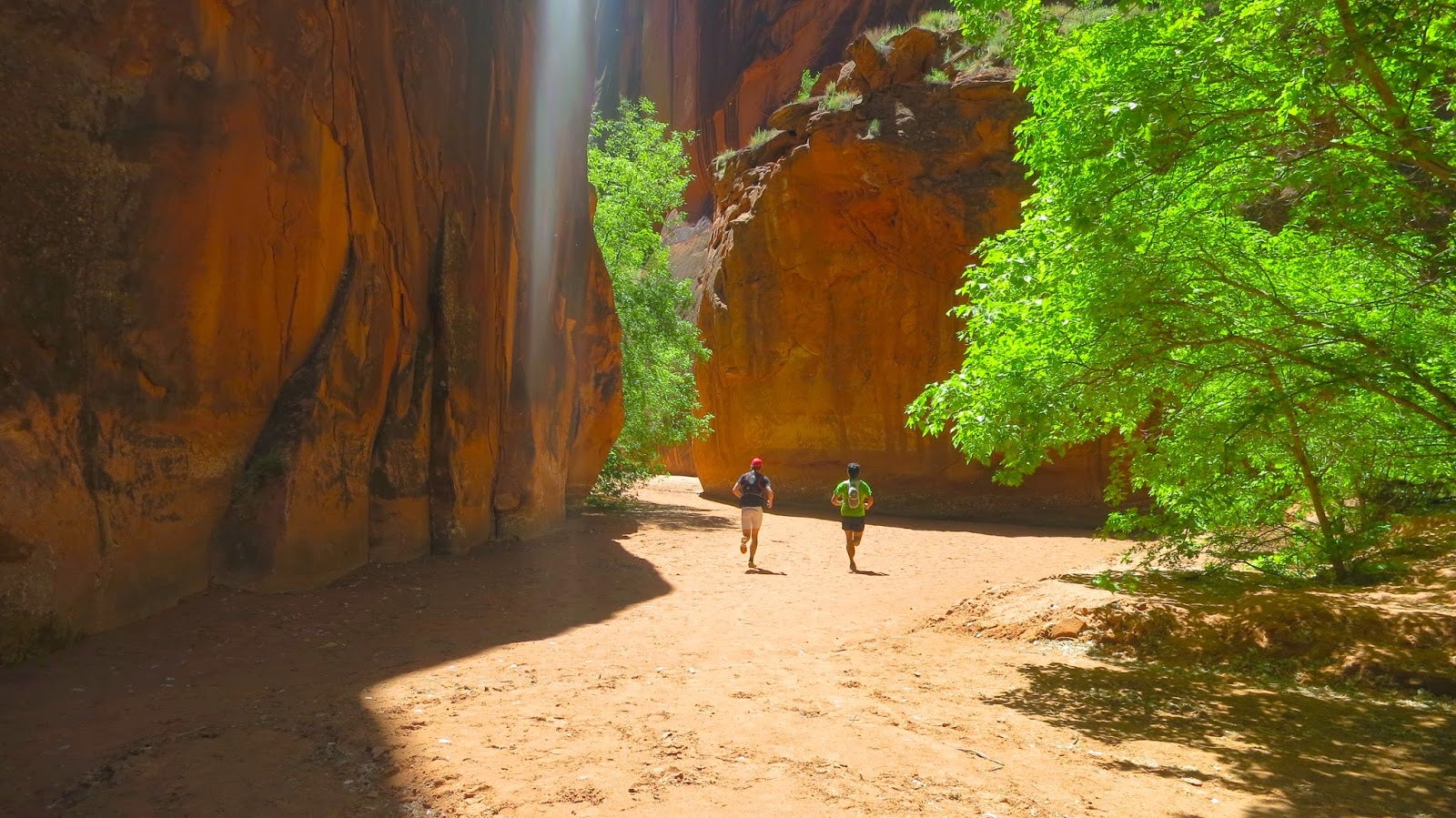 Unceremoniously, we started trotting down the river drainage, doing our best to keep our feet dry. Within minutes the mood changed as we grew more and more excited by the deepening canyon and narrowing walls. Pretty soon, we were charging straight through the river and yelling about how pretty it was. We were a modern mix of Paiutes, Silvestre Escalante, steeplechasers and Butch Cassidy. We toyed with the idea of gunning for Jay Aldous' fastest known time, since we could tell that with the low water flow, conditions were fast. But ultimately decided to just play around, explore, and take pictures.

As it turns out, running over an hour slower than Jay was still hard.   The first 25 miles were a joy as we played and splashed like kids. We explored the Buckskin Gulch confluence, drank from trickling springs and took turns laughing at each other every time someone would fall in what originally had appeared to be supportive mud.   The last 13 miles got a little tougher as the trail left the riverbed and became quite sandy, to the point where running felt almost useless. It was hot and Tom's white legs were starting to get burned. Our tender feet began to hurt as they've been protected by ski boots for months. We must have been getting tired because we stopped taking pictures and the desert began to attack. Jason found a cactus. A large stick gouged my leg. And Tom quit being Tom. He normally runs off the front and pushes the pace, but he seemed content to fall in line and let me or Jason dictate the shuffling. 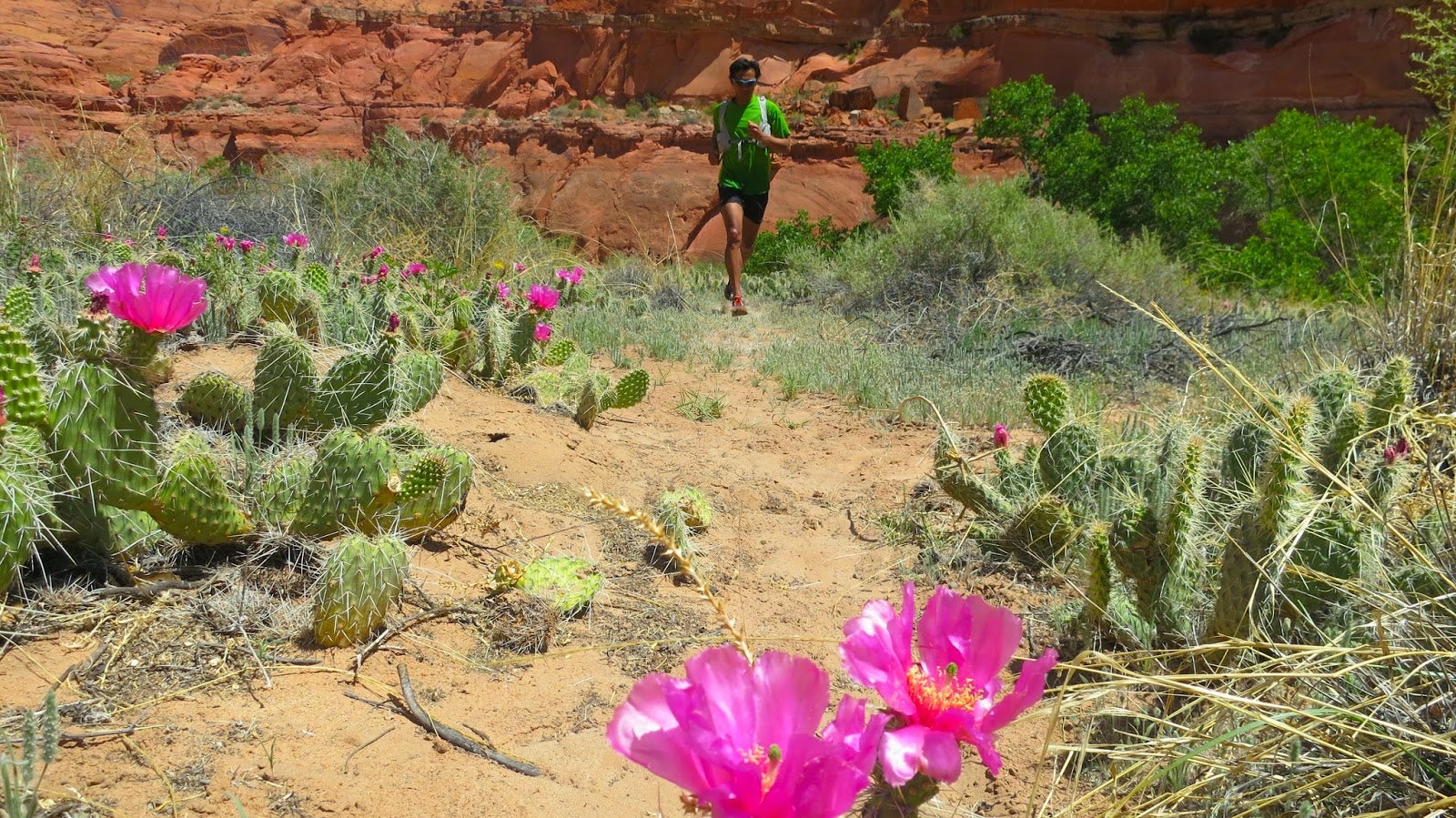 Pretty soon, though, we started seeing signs of man with the ranch ruins, old fence lines, and then finally the trailhead. Standing on the pavement above the Colorado River, we all felt a little woozy and nauseated. We needed some salt and real food, and Amanda and Aimee were there to deliver. They had driven to within five miles of Lee's Ferry, where they encountered a detour on Hwy 89. Incredibly, they backtracked and detoured 90 miles to come get us, panicked that we'd have to wait or think they weren't coming. We were pretty grateful for the treats and the deluxe chauffeur service.

Utah is incredible, and while this region is designated and protected wilderness land, it doesn't get nearly the recognition of the more famous parks of the desert southwest. The whole day we saw only  a handful of parties hiking, and mostly within the first 10 miles.  I am still psyched to ski if conditions line up, but I for sure have a lot of desert time on the mind.

wonder how many other unheard-of gems are out there.... 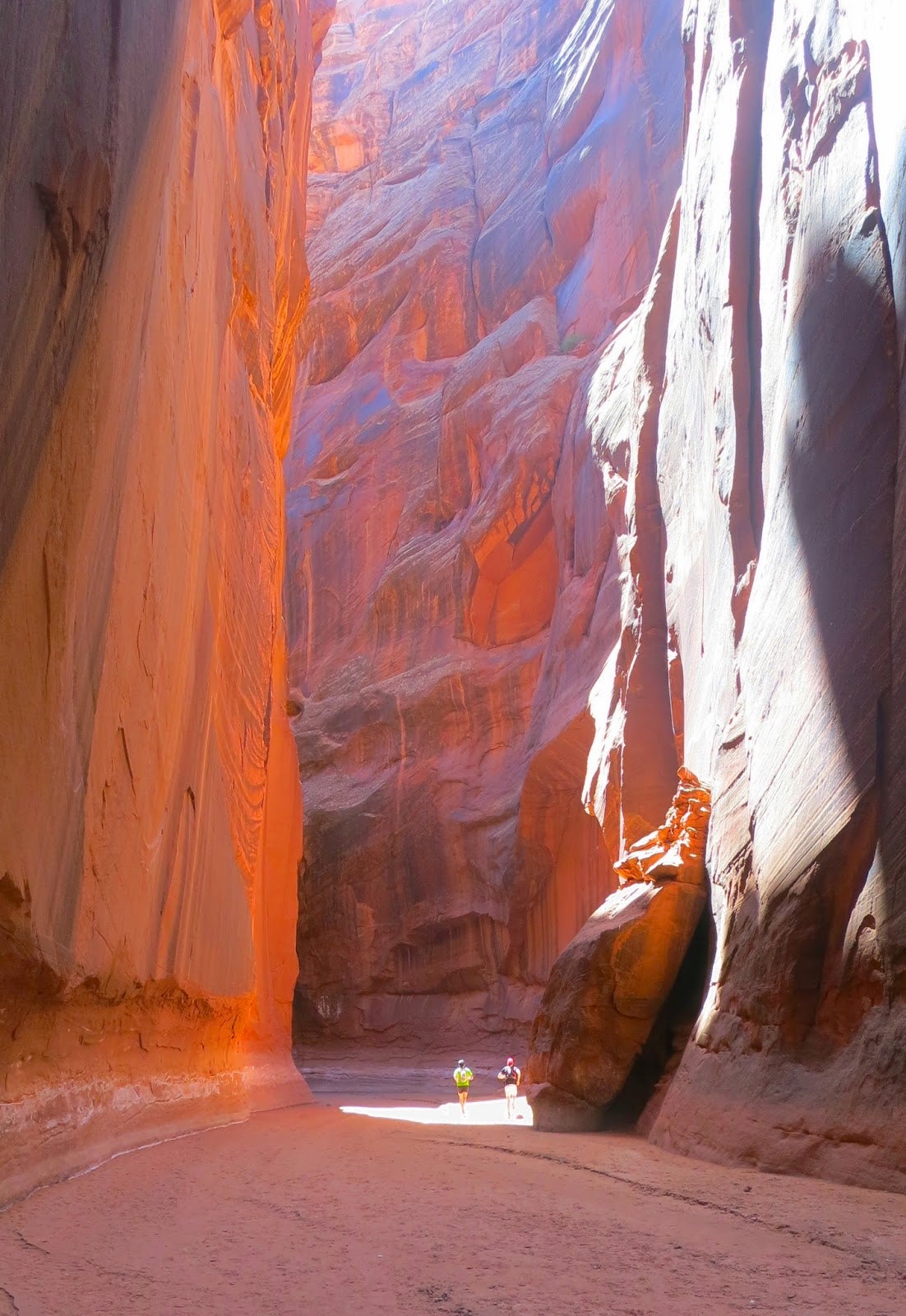 Details
Total mileage: 38-40
Time: 7:30 ish
Food: a few gels that Tom gave me (I would have been screwed without em), some crackers, and sport beans
Drink: Powerade (without the bromanated vegetable oil!) and dirt water from a couple springs