In March 2013, Outdoor Research athlete Sarah Hueniken sent Mushashi, an M12 mixed climb in the Cineplex, a cave near the Columbia Ice Fields in Alberta, Canada. It was a culmination of a decade-long dream she'd had ever since seeing a video of the first ascent of the route. With the redpoint of the route, she became the first North American woman to climb M12. After the climb, she wrote on this website:

"What do I do now that my tree has bloomed and lost its leaves? Winter is over, mixed climbing is pretty much done, and mentally, so am I. There is sadness in seeing my goal slowly decompose. Somehow I need to take all those branches, leaves, limbs and weathered bark and let it fertilize a new seed, allow the life cycle of my goal to complete itself. So I rake the leaves into a big pile and hope that they feed the soil of a future seed. And the search begins."

She found a seed, and a new goal: a climb called Steel Koan, also in the Cineplex cave—an M13+ mixed climb, the hardest route in the cave, and in Canada. It’s 25 feet of overhanging rock to 30 feet of dead-horizontal rock, to a finish on an ice curtain. First ascensionist Will Gadd said the climb had “no one crux, just powerful and intricate body movement for many moves in a row.”

Hueniken spent two weeks of early 2014 with Will Gadd, John Freeman, and Katie Bono developing Overhead Hazard, a seven-pitch M12/13 at Helmcken Falls in British Columbia. In early March, after spending Hueniken dedicated two days to redpoint attempts on Steel Koan, and sent on her seventh attempt, becoming the first North American woman to climb M13+, and the second woman to ever climb Steel Koan—Italian climber Angelika Rainer redpointed it in December 2013.

We caught up with Sarah to ask her a few questions about the climb:

OR: What are the moves like on Steel Koan?
The route starts with some steep moves, and a few big reaches (one is to a blind hold) that is really skatey. You take some good swings releasing your tools. From there, you traverse across under the big roof on heel hooks and crampon scums. Then you get on to the horizontal roof, where I managed to get one good "starfish" rake to get a bit of a shake. The roof follows a cool natural seam, with a ton of figure 4's and 9's. Very limited to no feet. Then you come around a bulge up some more rock and on to the ice curtain. From there, this year, the falls totally goes to the ground and is wide, so you can't really climb through it or around it. I got on the ice and then down climbed just so I could feel like I had climbed some ice.

OR: What was the crux for you on the route?
The crux was the blind hold for me—scary trusting swinging on a tool that you weren't sure was on the hold. Otherwise, the challenge of the route is mostly grip strength endurance. Although my butt muscles were sore for days after climbing it—so maybe it involves other muscles that I was unaware of!!

OR: What does it mean for you to have sent the route?
I was psyched to send the route, mostly because I wanted to culminate my season with a new high point. For me it was about finding a new challenge, and making the most of the fitness I had from the winter. It’s a long drive out there, but the cave itself is really beautiful and I find the routes and their history very inspiring.

OR: Did you train with this climb in mind, or did your comp climbing and other mixed climbing this season just lead you to this point?
I suppose all the climbs in the Cineplex were in my mind after last year. More of a curiosity of what they were like and if I would be able to do them. I thought I would try Steel Koan after I sent Piltdown Man (M12) in the Haffner Cave, because Piltdown had some really big moves and that gave me the confidence to try something harder. I also felt pretty good after sending the crux (M12/13) in Helmcken. Mostly, this winter I trained for going to the Bozeman Ice Festival comp and Helmcken, and the new routes we were building up at the Temple of Silence. There is a fine line though between training and climbing: The best thing is when the two are the same. You climb because you love it, and that in turn makes you stronger for more climbing!

OR: It took you seven tries over two days—did you expect to spend more time trying to redpoint the route?
I tried most of the route one day before going to Helmcken. The moves felt doable so I put it in the back of my mind for later in the winter. Luckily I managed to find 2 buddies on 2 separate days to come up there with me and try it out some more. The first day I tried it 3 times to the end of the route. The next time I went back, I sent it on my third go. It felt completely unlikely on the second try and then relatively easy on the third try so you just never know—you always have to start a route with an open mind and a positive outlook! 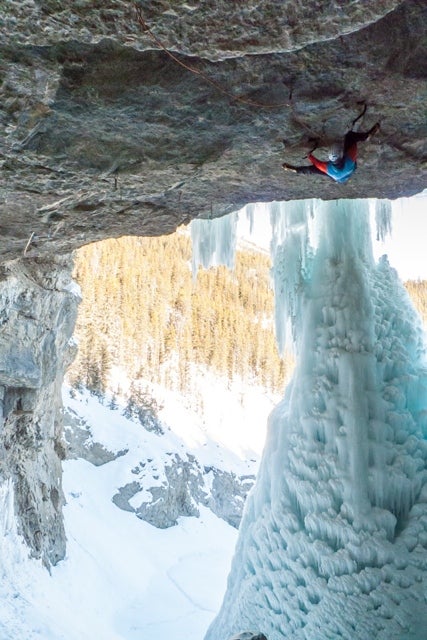