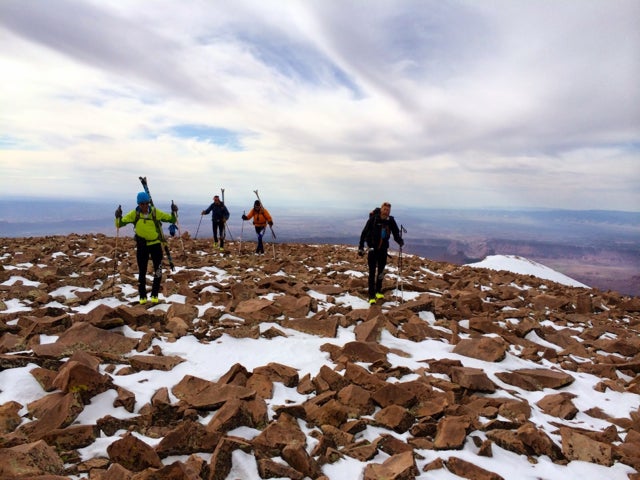 This weekend makes the third time that I found myself in Crested Butte to race and that I left without actually racing. Previous attempts were derailed by sickness, but this one was thwarted by a last-minute course change due to avalanche conditions. We had intended to represent Outdoor Research in the Elk Mountain Grand Traverse from Crested Butte to Aspen, a race we've done the past two years. But this year, when we found out it was rerouted as an out-and-back, we suddenly lost interest and felt a desperate need for some adventure.

A few years ago, Jason and I had thought about trying to traverse the La Sal mountain range, and then I gave it a shot last spring with Teague and Tom, coming just short as we battled horrific conditions for some 16 odd hours before bailing. With the Elk Mountain Traverse now a "Reverse," we hatched a new plan. Our motivation for racing id to be able to have the fitness and skill with light gear to be able to attempt big adventures, and nobody in our group needed to be reminded of that now. We ran the new plan by Christian Folk, Outdoor Research Top Brass at the race. He was nothing but encouraging, and said we needed to do what inspired us. He'd race in our place in spite of some apprehension as he felt ill prepared. We found him a partner and he was set for an adventure, too. What an incredible company to support us like that! He wanted us to have as much fun as possible and stepped up to suffer to maintain an OR spot in the race and allow us to feed our adventurelust.

Tom and Lars rode with us from Salt Lake City. Teague checked the weather forecast and immediately signed up with his EMGT partner Brad LaRochelle. That put us at a party of six, which seemed rather large, but since all these guys are top-tier racers and can handle themselves in the mountains, it seemed like it might just work. Getting food in Grand Junction, we realized we forgot about Durango hardman Scott Simmons and called him up. I asked what he was doing this weekend, and he just replied, "I guess I'm skiing the La Sal traverse." The man has priorities! 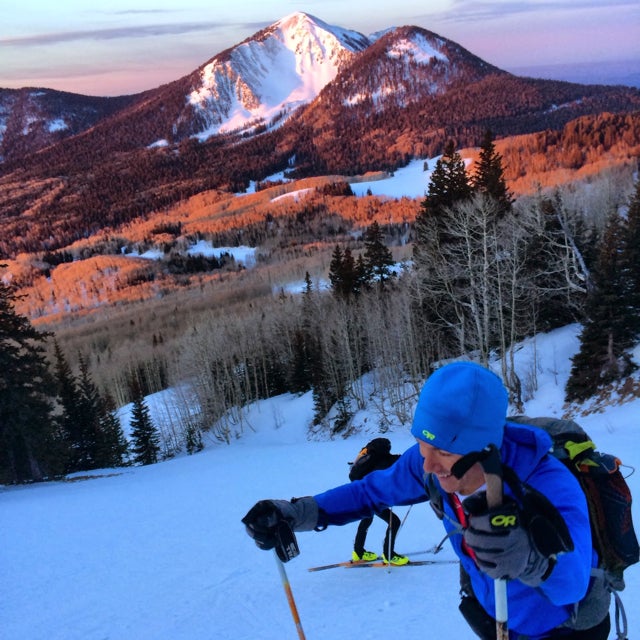 We all caught a few hours of sleep before driving out to Lacky Basin to begin the 4x4 drive up to the start of the traverse on the far southern end of the range. Teague was the only one with a suitable vehicle, so all seven of us piled into his Tacoma and we bumped our way up to the trailhead—where the road gets too rough or we encounter snow.

Most of us pulled on running shoes and with skis on our packs, Tom and I jokingly sprinted up the road for 50 meters or so to start our long day. Soon patches of snow began to dot the road and we switched to skinning. The conditions were fast and smooth and we made good time to the summit of South Mountain (11,817). With seven bobbing headlamps and the faintest hint of dawn to the east, we gang skied a couple inches of fast powder down the upper slopes and into a playful forest to the east of La Sal Pass. Feeling like we had skied far enough toward Colorado, we transitioned and started the long skin across the basin and up Mount Peale (12,721). 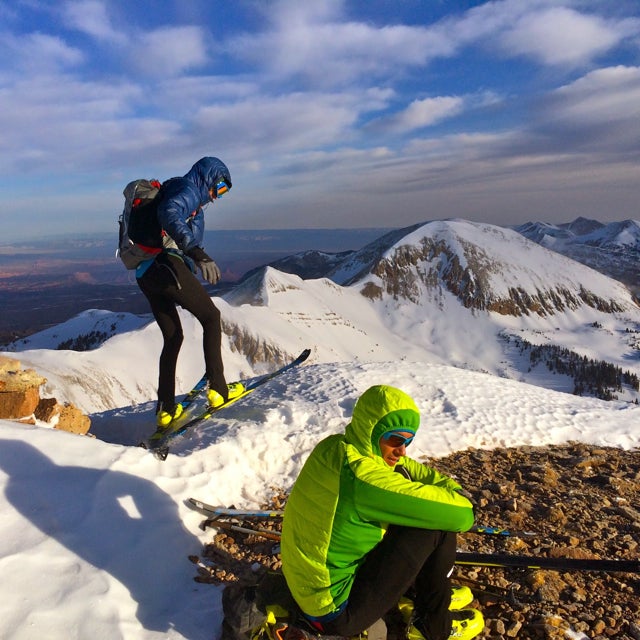 With forest and mountains glowing red from the eastern sun, everyone was playful, shouting back and forth and skinning with good momentum onward and upward. Gaining elevation, the light sharpened and the wind picked up to damn near gale force (39-54 mph as defined by the NWS). Fighting to keep balance while skinning or booting, our skinny skis would catch the wind as little sails. We all summited within a minute of each other and found shelter on the lee side to transition again, our third of perhaps 100 throughout the day.

The conditions were appropriate for gang skiing the ridges and our approach was methodical. Each person was a model of efficiency with race transitions, quick skiing, and continual upward movement as everyone took a turn breaking trail or putting in a booter when needed depending on who felt strong at the time. Next up was Mount Tukuhnikivatz (12,482), which afforded brilliant views down into the canyon lands around Moab contrasted against the snowy ridges we were climbing. After a few pictures and a short discussion on how to approach the ridge to Mount Laurel (12271) and Mellenthin (12645), we decided to ski a fun powder shot into Gold's Basin and then climb back up rather than retrace our path. Four inches of snow from a couple days prior proved nearly heroic as we put seven tracks down into the basin.

Back into the wind we climbed, over Laurel and Mellenthin where we paused to look down toward Gyser Pass and the North Group. On my previous attempt to traverse this range, we had battled severe weather and worse visibility to this point and had a little trouble getting off Mellenthin. Now, with clear skies and visibility forever, this was going to be good. The guys skied down the ridge a bit to a nice steep shot right down the north Face. Here, we skied one at a time with Jason being unlucky number 7. It's the price he pays to get great photos.

We skied and skinned our way across Gyser Pass and shortly started up Mount Tomasaki (12,239), but warming temps coupled with our lower elevation wreaked havoc on our skins and nearly everyone had some issues with snow glopping. We had wax and extra skins and the train rolled onward and upward. I remembered from our previous visit that the climb up Tomasaki was difficult, and this day was no different. I worked hard to catch up after stopping to change skins and felt the effort. Jason was nearly giddy on the summit, cheering and shooting video while most of us glumly chewed some food and skied off without much chatter. I guess they were feeling it, too. 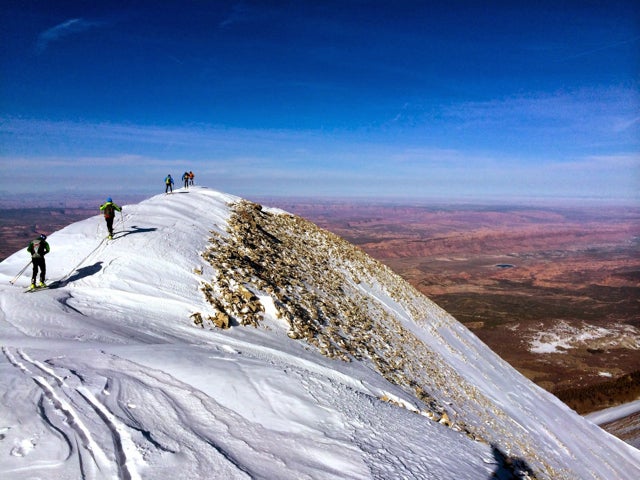 With what looked like innumerable small peaks on the ridge to Castle Valley, we got to work. First Manns (12,272), then I think Green (12,163), then Piolet (12,200) amongst the named ones, and then we could smell the barn as Lars tried to say. He sometimes struggles with colloquial phrases, much to his chagrin and our entertainment.

We must have been getting punchy, as some strange stuff started happening. Scott climbed a pole, there was some hugging, and a lot of premature celebrating. We tried calling Dominique, Tom's ever-patient and supportive girlfriend, as she was going to pick us up at the head of Castle Valley, but unfortunately the call wouldn't go through. She was supposed to be there at 6 p.m., so we figured we shouldn't linger, particularly since we were just going to figure out the exit of the fly.

Mount Waas (12,331), Castle Mountain (12,044) and then La Sal Peak (12,001) ensued and we were now truly psyched. It looked like we'd be able to easily ski directly to the north and finish our traverse in good style. I commented that it was amazing that we had all independently moved across such significant terrain yet stayed as a group. No one fell behind. No one broke gear. No one crashed severely or was injured. 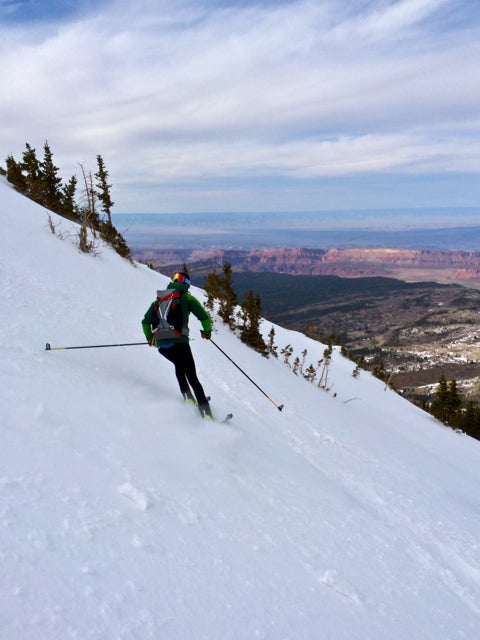 Thirty seconds later, I was blind sided by Lars—who claims I turned into him!—and we both went down. Three seconds later, we realized nothing was broken and we all were laughing at our foolishness and on we went with gravity. We were having a good time working our way toward the drainage, and eventually a road where Dominique was waiting.

Unfortunately, our progress became labored as the snow went to crap and we began fighting through the most unhealthy of forests with downed trees and limbs so dense that an exit began to feel improbable. We skinned up one last time to gain a sub ridge that offered slightly less annoying travel, and then I heard a shout, "I found a house!" One of the guys had broken through to civilization. A dirt road took us a couple miles directly to the parking area where Dominique had been patiently waiting for hours, just in case we finished early.  I sat down for a bit while we regrouped and it felt so good to finally stop moving. We played a bit more Tetris, stacking seven stinky guys into a Landcrusier with all our gear and bags for the weekend, drove to Moab, ate some food and slept.

Thanks to all the guys for working hard together to have our own Grand Traverse. I think the total stats ended up somewhere in the 19,000 vertical gained range with mileage being around 30 miles in 14 1/2 hours.  All our watches died, so no one captured it in it's entirety. It was a damn fine day.

GEAR WE USED FOR THE LA SAL TRAVERSE: 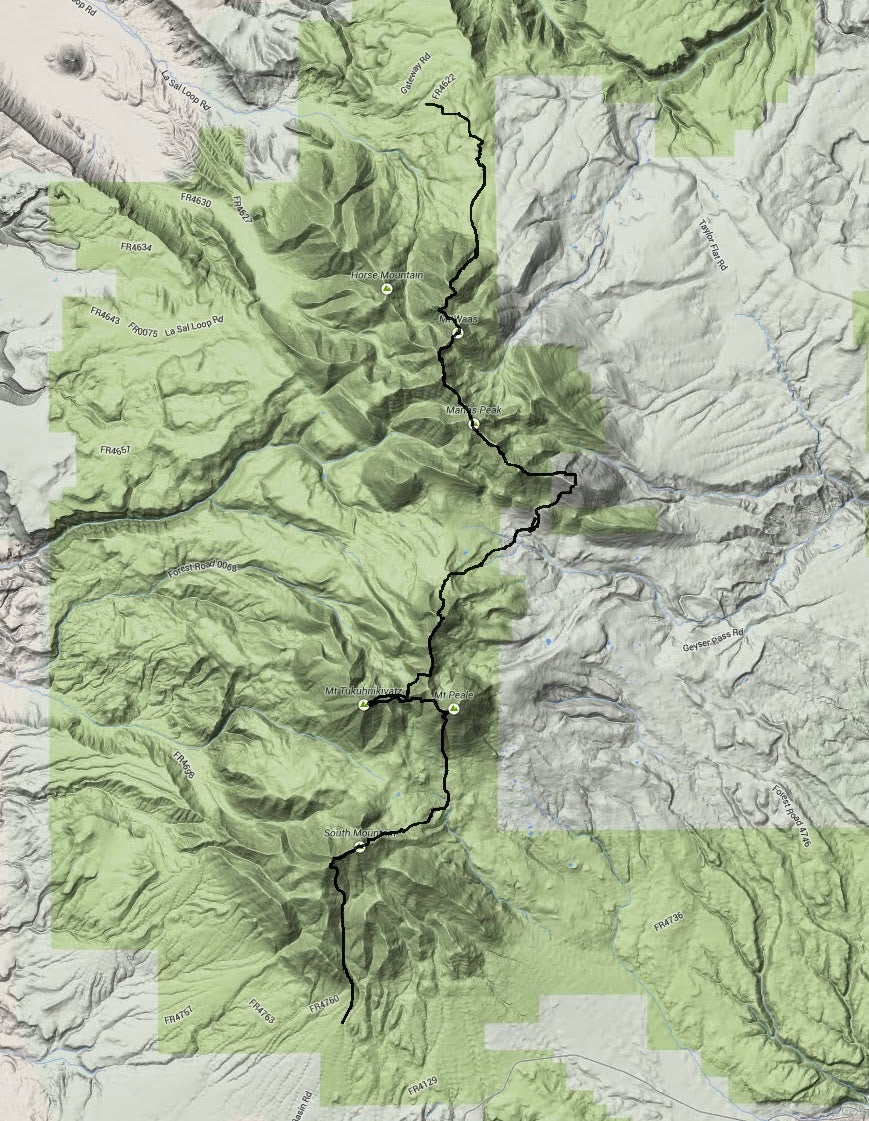