Skiing Some Of The Southern Hemisphere's Biggest Descents 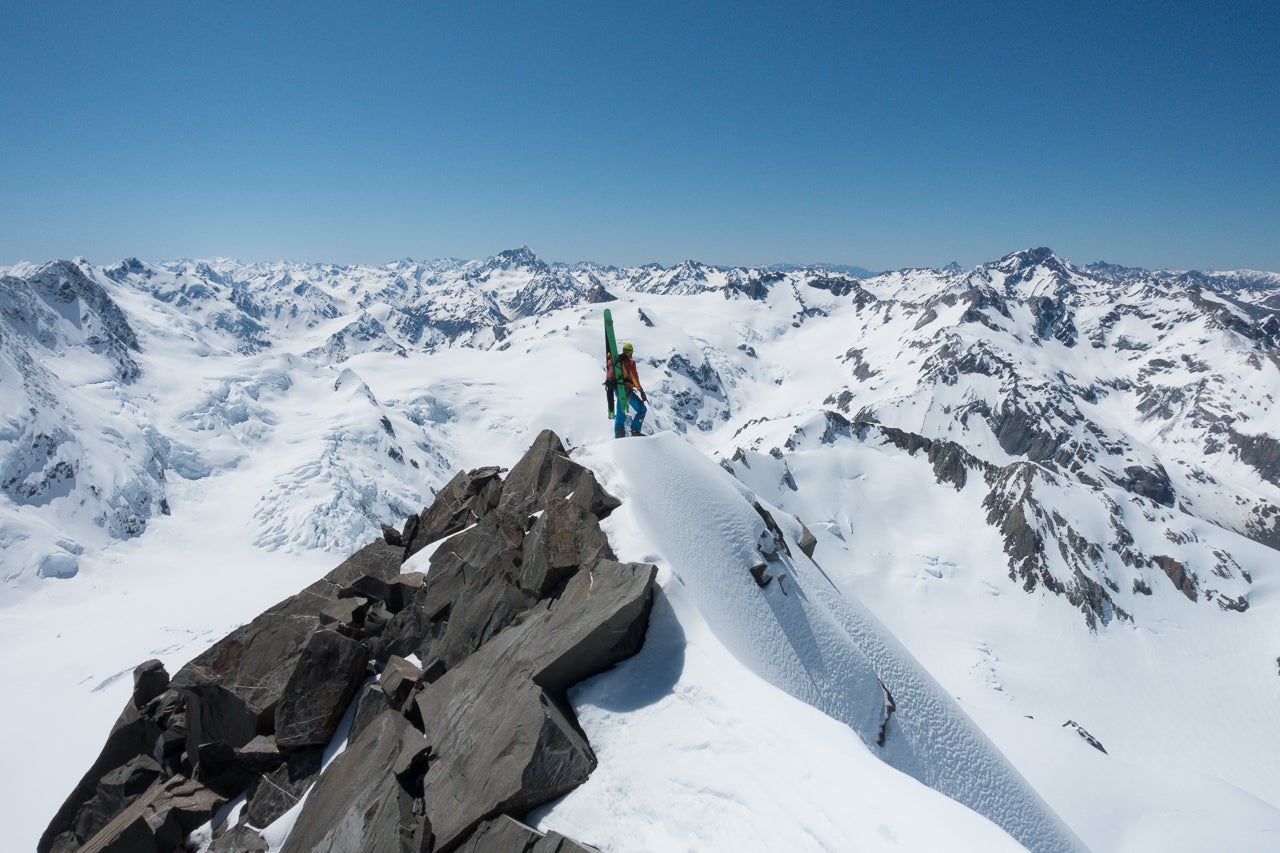 For the restless and hungry Northern Hemisphere ski mountaineer, New Zealand should be an obvious target for an autumn ski trip. However, it seems very few foreign ski mountaineers ever make the journey. Ross Hewitt, one of my main ski partners, had been twice before to climb in New Zealand’s Southern Alps, while I had never skied in the Southern Hemisphere. After one of Ross’s trips over a decade ago, during which he found himself wallowing down the Linda glacier in thigh-deep powder on Mt. Cook’s normal route, he decided taking skis was the only rational option for a return to the Aoraki/Cook National Park.

Shortly after I confirmed to Ross I was committed to the trip, he proceeded to explain at length how it was one of the windiest and wettest ranges he had ever been to, that the approach routes to and from the huts involved overhanging moraine walls of death, that our gear would get destroyed battling our way through dense jungle and that the snow conditions are as changeable as the west coast of Scotland. He thought that we would be lucky if we skied 6,000 meters of vertical over three weeks. In light of his gloomy prediction, our trip was an emphatic success.

Ross and I soon teamed up with visiting Americans Noah Howell, Beau Fredlund, Adam Fabrikant and Billy Haas. We all managed to ski the colossal East Face of Mt. Cook starting from close to the summit, which is one of the very biggest skiable faces in the Southern Hemisphere, averaging 45 to 50 degrees for a vertical mile of descent. This line had seen only perhaps three to five descents previously. Ross and I then went our own way, and skied two major new lines starting from the Tasmin Saddle Hut, the highlight being the committing and complex 800-meter south face of Mt. Darwin. In all likelihood we skied some smaller first descents too, but it's difficult to find out accurate information on what has been skied before. 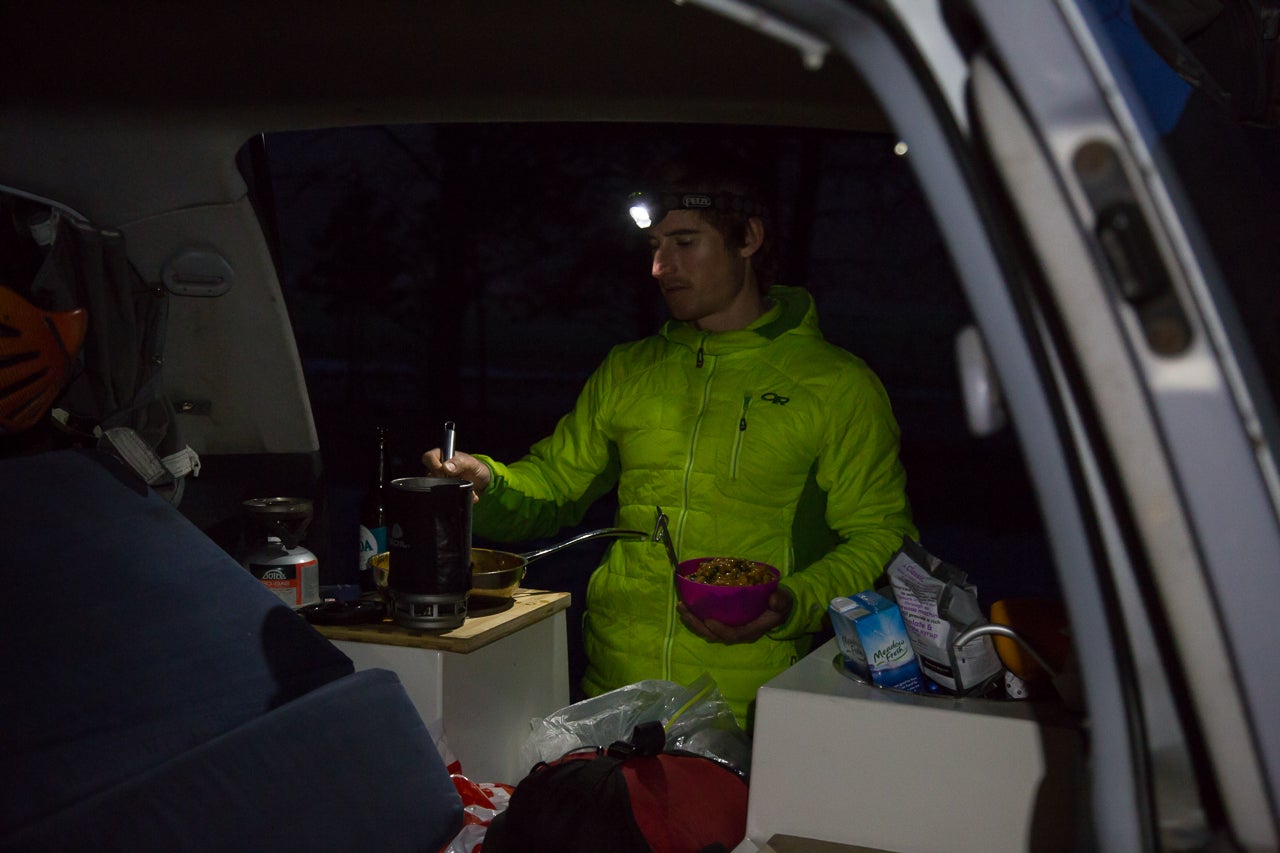 Living out of New Zealand’s cheapest and smallest rental campervan for almost a month is a test for even the closest of friends and mountain partners. Trying to cook dinner out the back of the van while it was gusting 50 mph in the valley wasn’t always a lot of fun, and the cosy sleeping arrangements inside meant that there was no escape from Ross’s bad gut that he'd acquired from some virus. 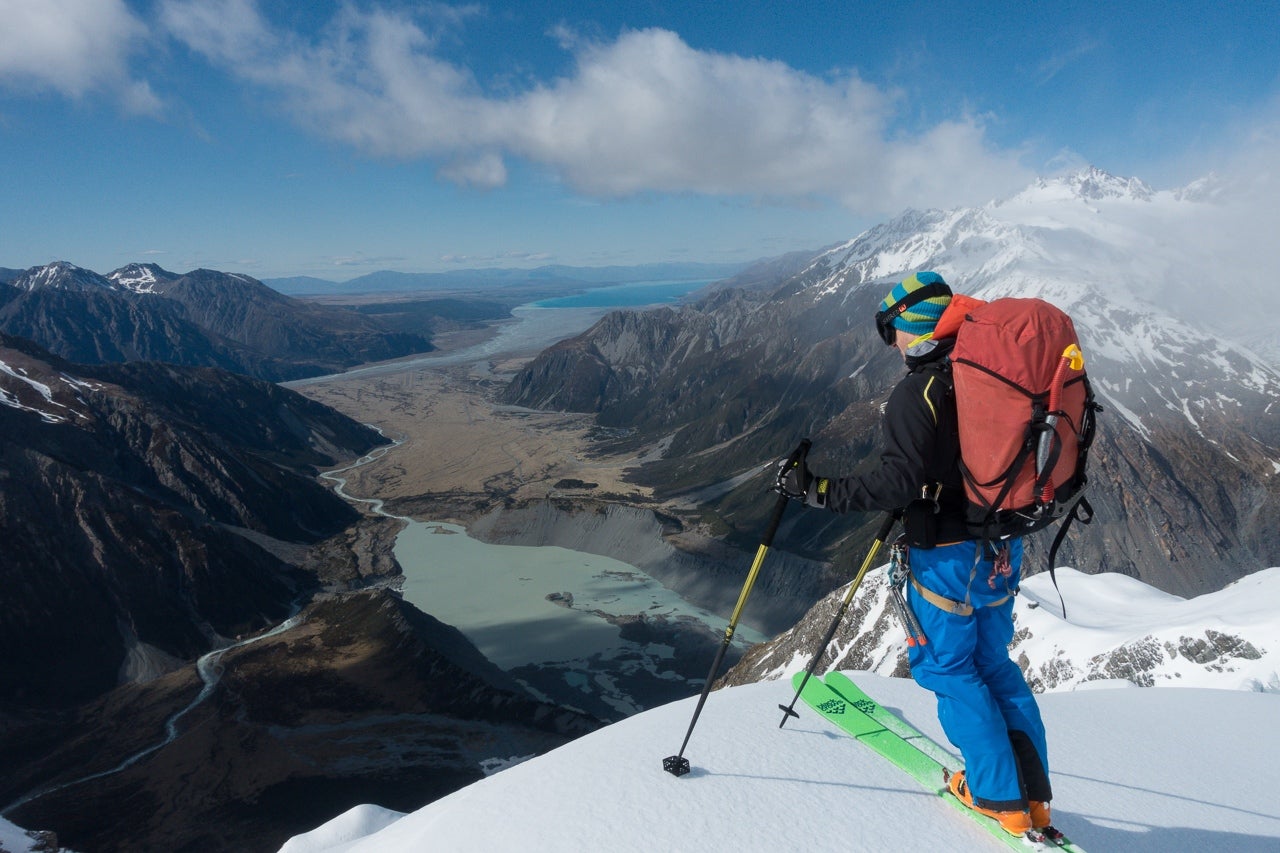 Waiting for the bullet-proof snow to soften meant a chance to take in the unique landscape. Hiking to the snowline is a typical part of many New Zealand ski excursions. The rugged adventure and lack of easy access made for a refreshingly un-European ski experience. 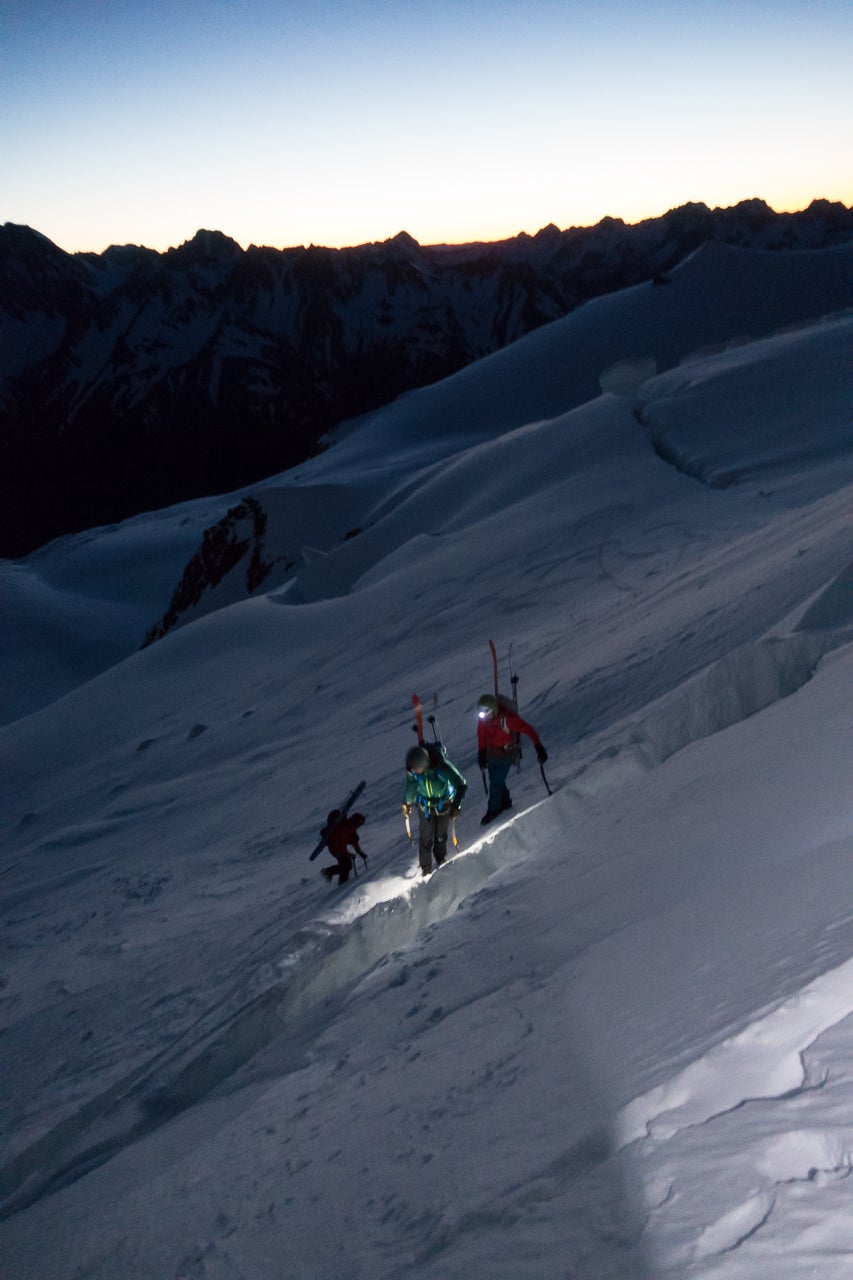 Starting up the East Face of Cook at 4 a.m. There is always something special about a predawn start up a big face. A potent mix of trepidation and excitement. 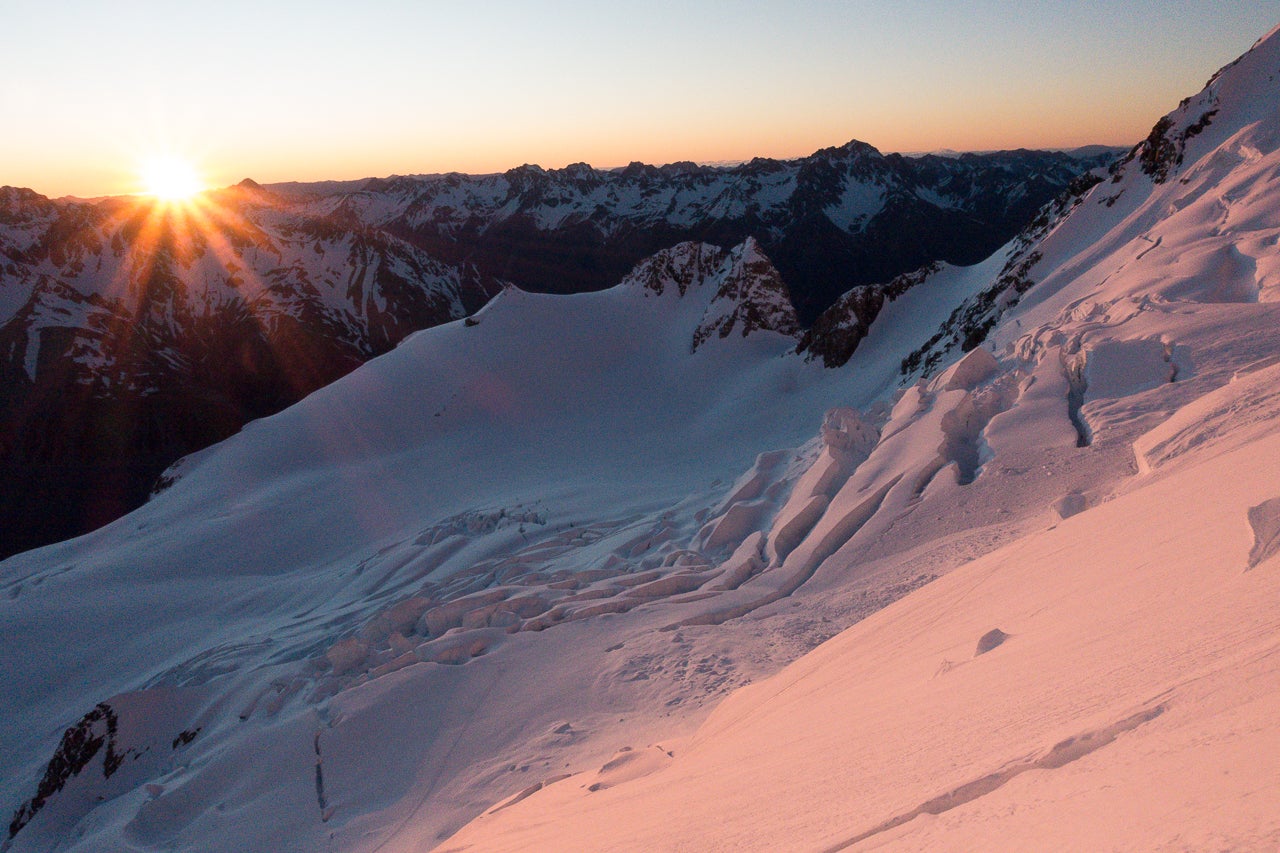 Dawn on the mighty Plateau Glacier at the foot of Mt. Cook. New Zealand’s glaciers are retreating with incredible speed, yet they remain huge and often difficult to navigate. 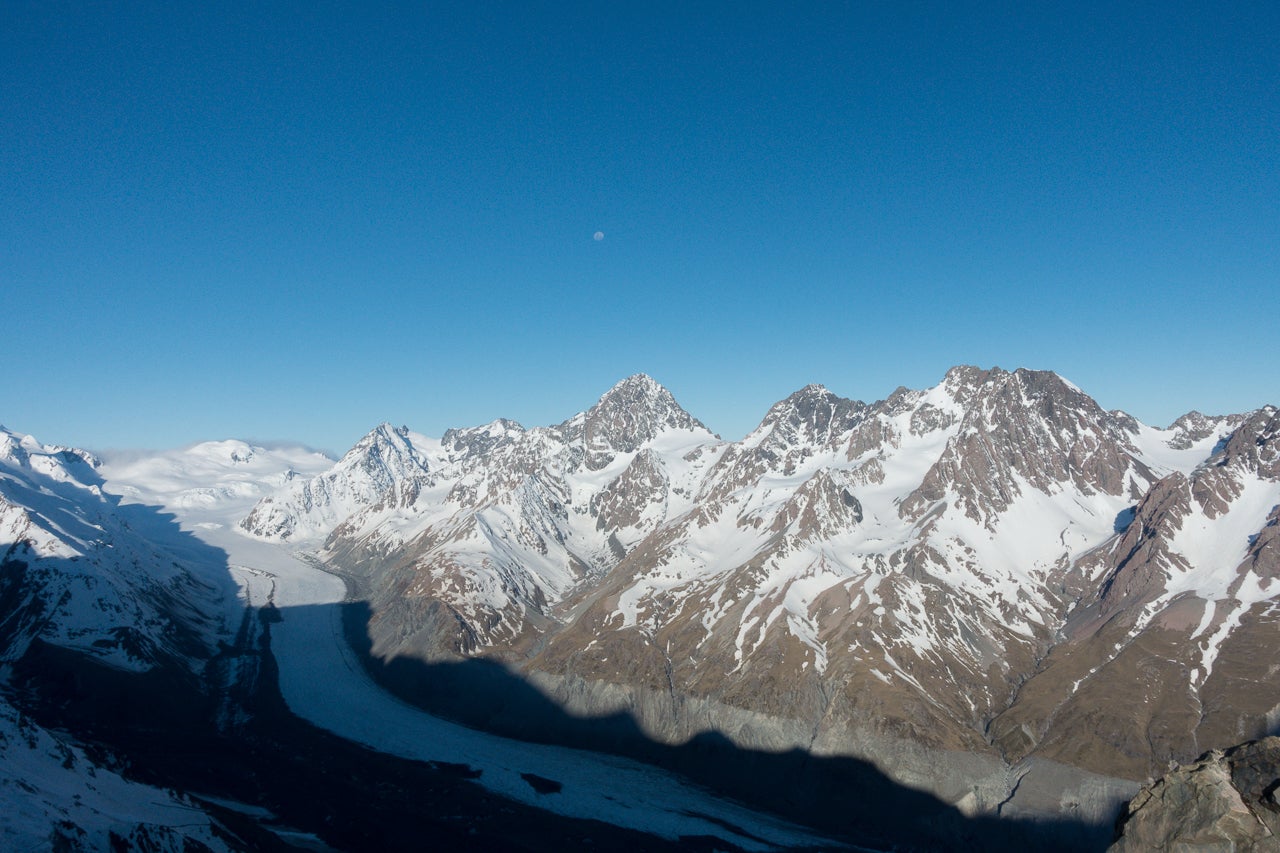 Looking down onto the Tasmin Glacier, New Zealand’s largest and longest glacier. We based ourselves at Tasmin Saddle Hut for a total of 10 days. Twenty-eight kilometers long, the ski/walk out was one to forget. 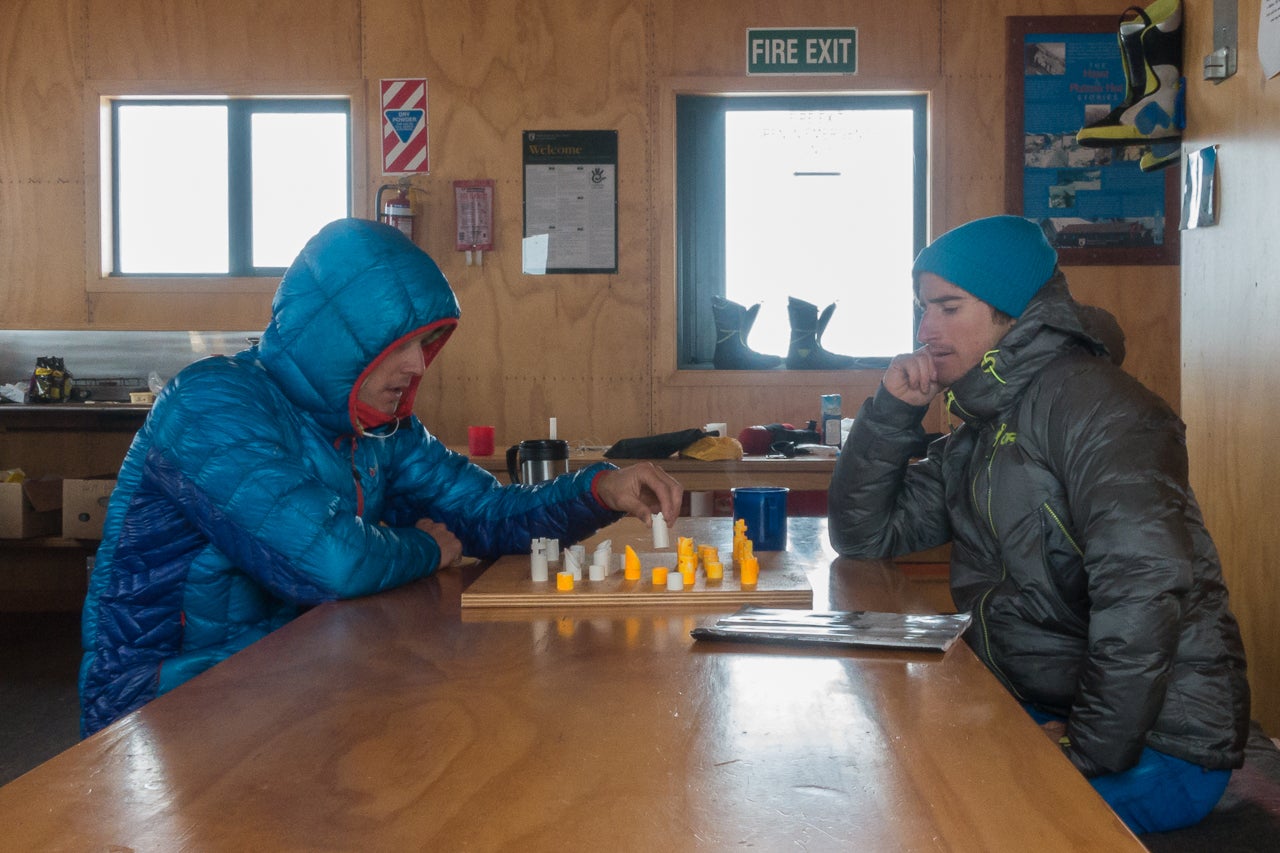 Trapped in the Plateau Hut by a storm producing gusts of up to 90 mph, we were unable to even open the front door to access the toilet outside. A homemade chess set provided limited entertainment when the beer ran out. 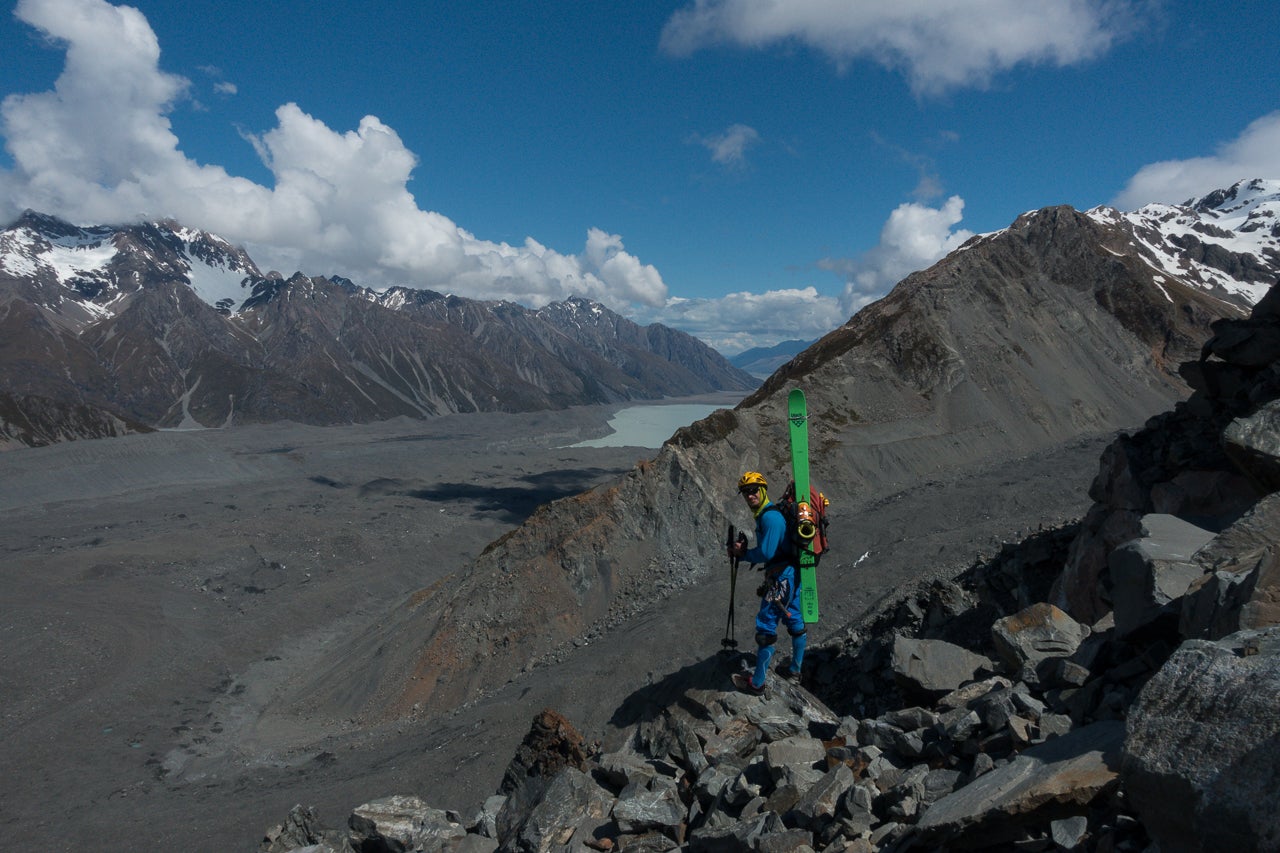 You may think that there would be a clearly marked descent path from New Zealand’s most popular hut. Nothing could be farther from the truth. An endless sea of teetering moraine rubble awaits ahead. No path, just choss. We passed some time by trying to calculate how many rocks there might be on the glacier. Otherwise, we put our heads down and suffered in silence. 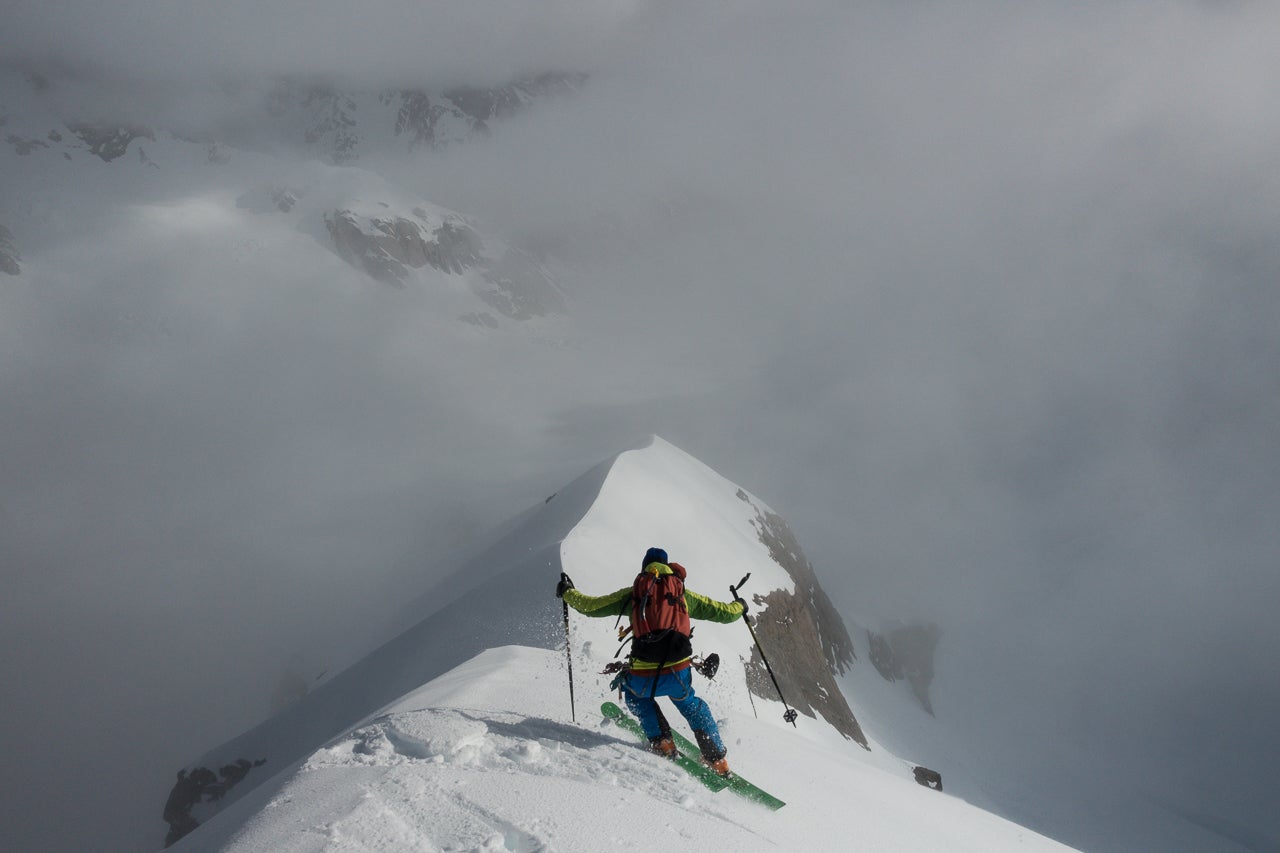 Returning form a first descent on the West Face of Elie de Beaumont, we searched for a way down through the parting clouds. We stumbled upon a long and aesthetic arête which we skied onsight to the valley floor. The snow was a breakable crust, quite technical to ski! 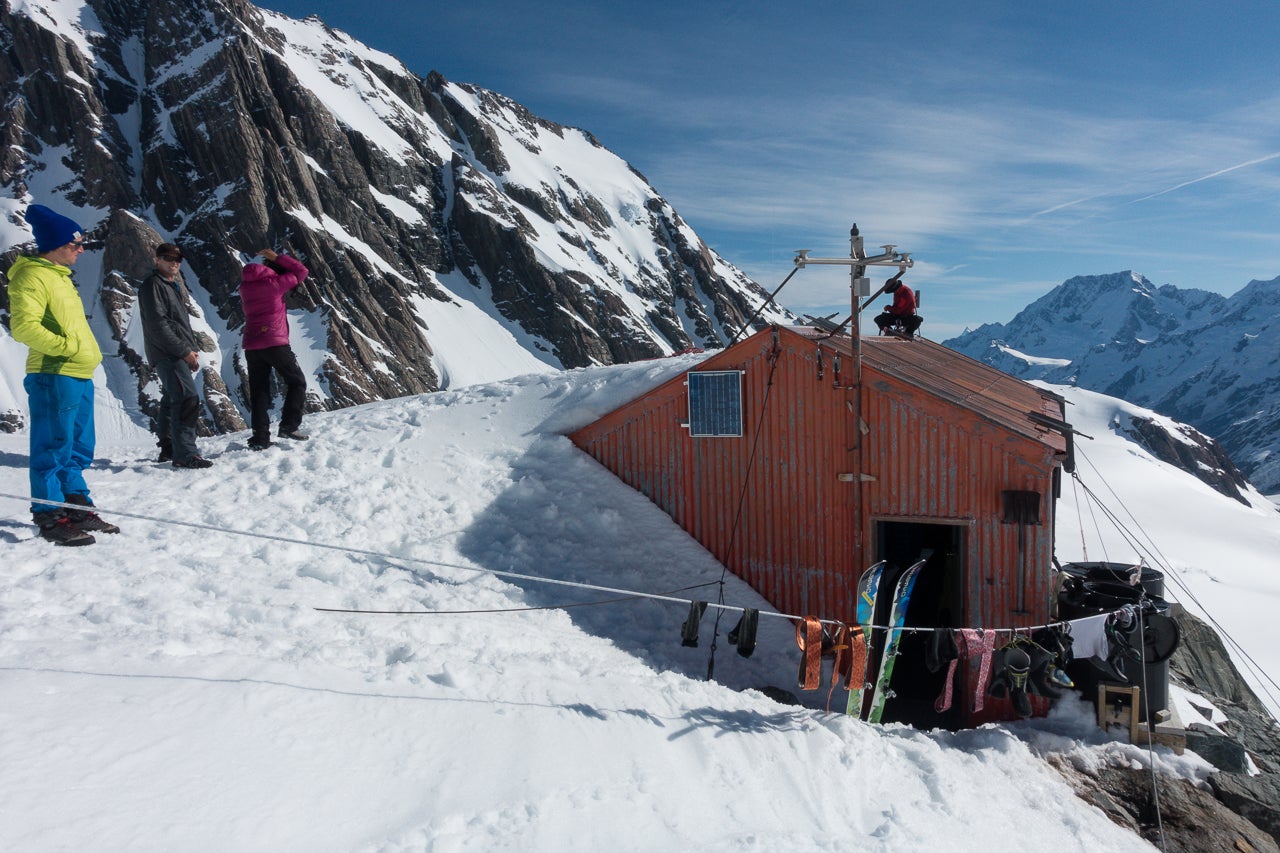 The Tasmin Saddle Hut became our home for a total of 10 days. Situated on an exposed perch, there wasn’t much room for wandering about outside on foot. 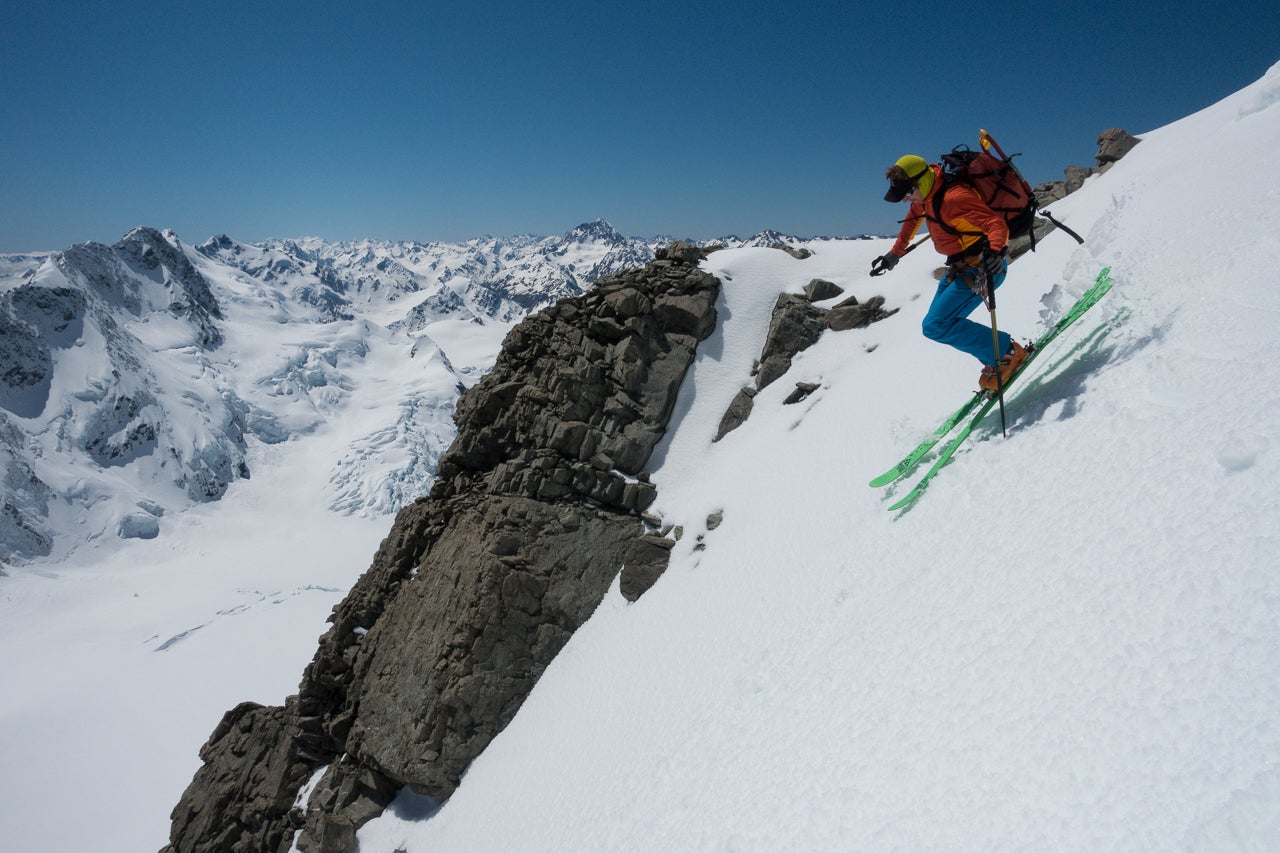 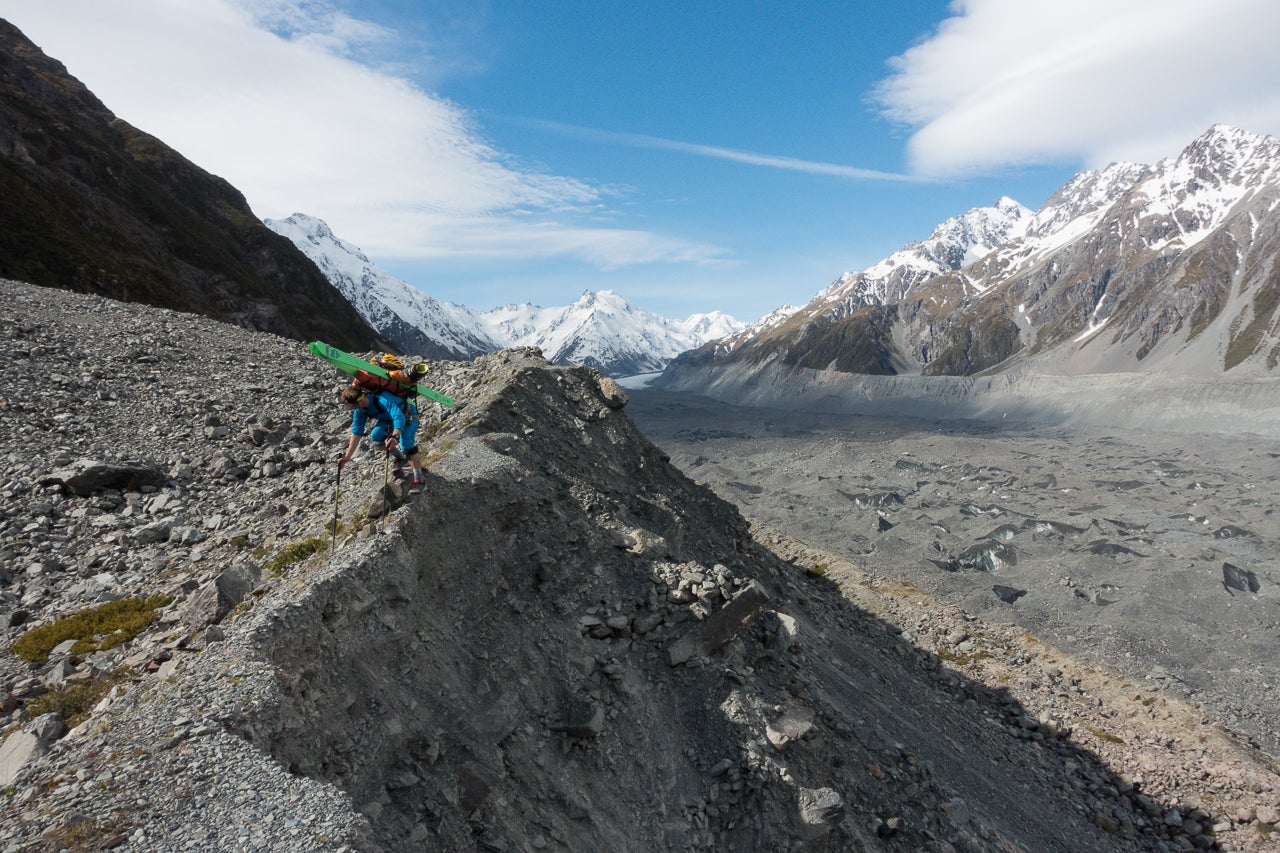 After spending a week around the upper reaches of the 20-mile-long Tasmin Glacier, we returned to civilization by first skiing down what snow was left on the glacier, then skiing the dry glacial ice, followed by walking through endless loose rubble. Then we finally hit the "good path," which I’m trying not to fall off in this photo.