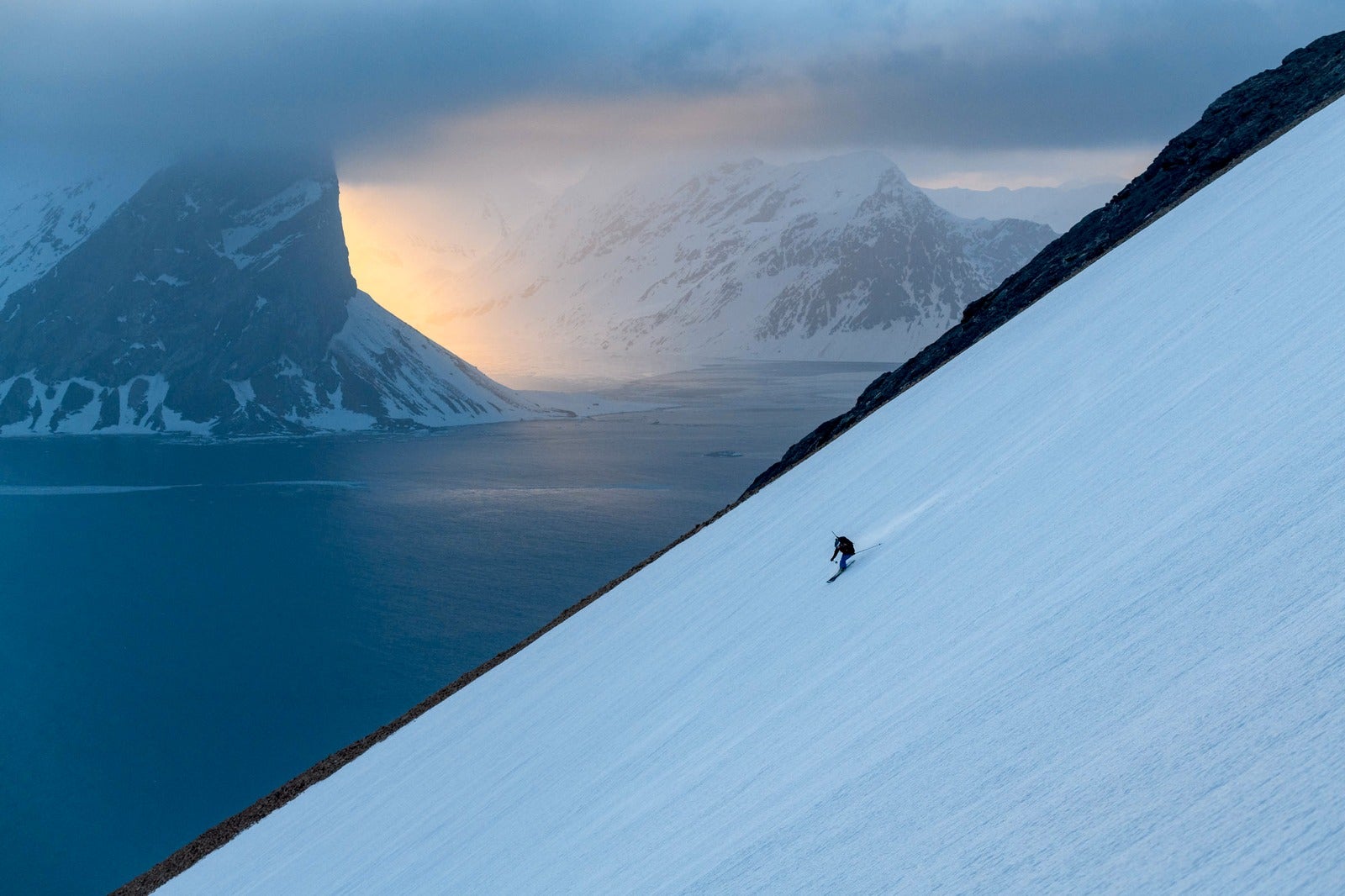 I completely surrendered to fear a few times during that crossing—800 kilometers of open ocean so cold that the falling snow actually accumulated on the surface. I’m sure my measure of fear in this scenario is child’s play for most arctic explorers. But I was questioning whether I was anything tougher than an over-groomed lap dog. After all, in the Middle Ages the Barents Sea was called Murman Sea (insert Zoolander reference here). Still, I asked myself if I was just scared of what I didn’t know—or if the whole thing was as dangerous as it felt at the time.

I used to fish commercially in Alaska and lived on a boat for months at a time—but I will never forget my first thought laying eyes on the boat I was going to take across a portion of the Arctic Ocean: “Wow, that’s a small boat.” 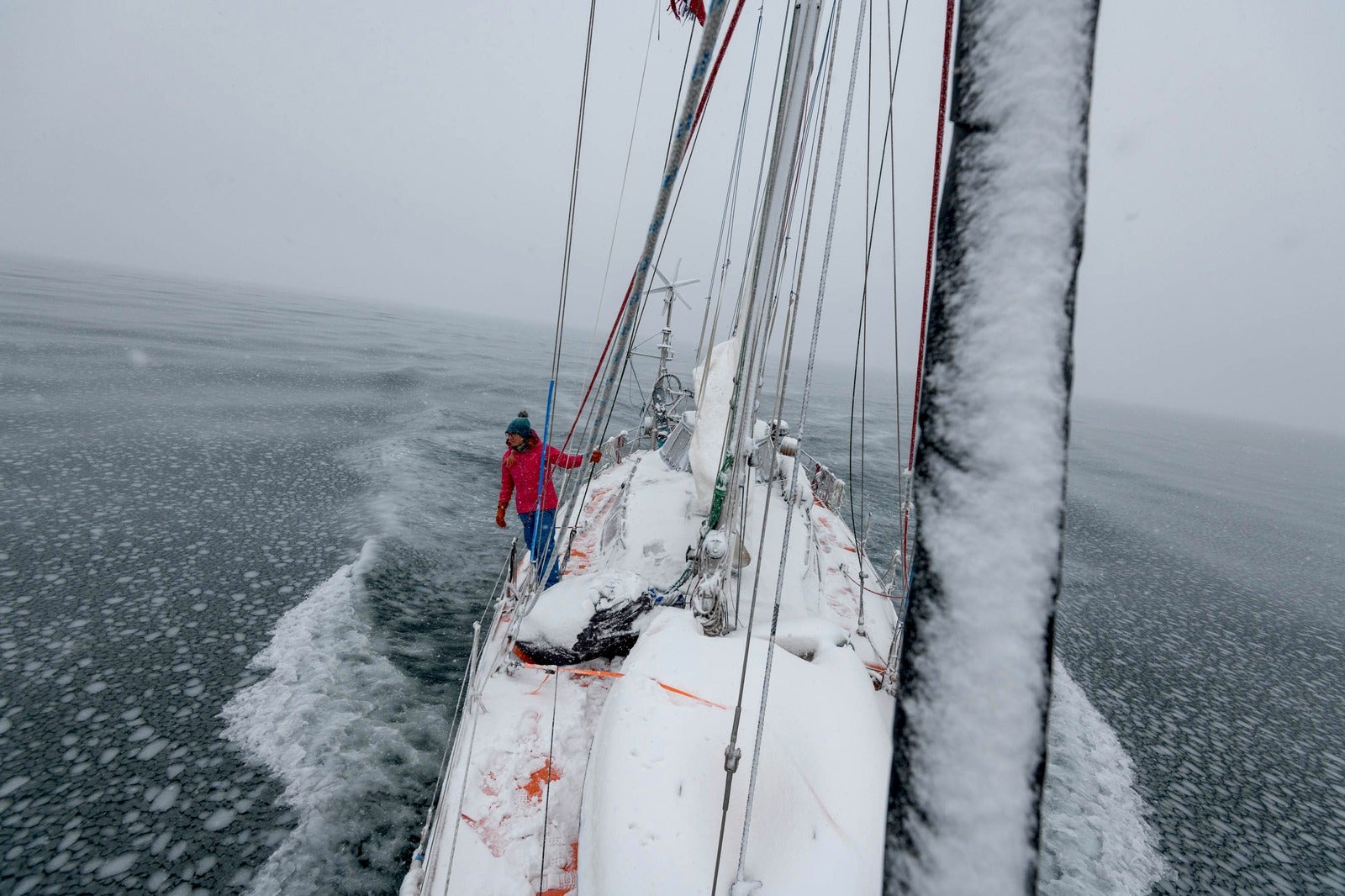 This is my story of three women sailing to and skiing in Svalbard for three weeks.

“We are going to let our 33-year old captain sail us 460 miles north of the northern-most township in the world,” I wrote in my journal.

Turns out, the Knut is a beastly ice-crusher built for exactly what we were about to do. She also needed a little work. The helm was broken and needed re-welding. The fancy hydraulic auto-pilot was broken. The satellite phone was not working. Also, the boat needed to be stocked with firewood and food. We were busy bees for the first few days.

Our crew arrived in the little town of Hammerfest, Norway, each coming from a different direction. Jess from Alaska, Hazel from Spain, Fred from skiing in Lyngen, myself from Wyoming, and Ben—our incredible captain—from Switzerland. 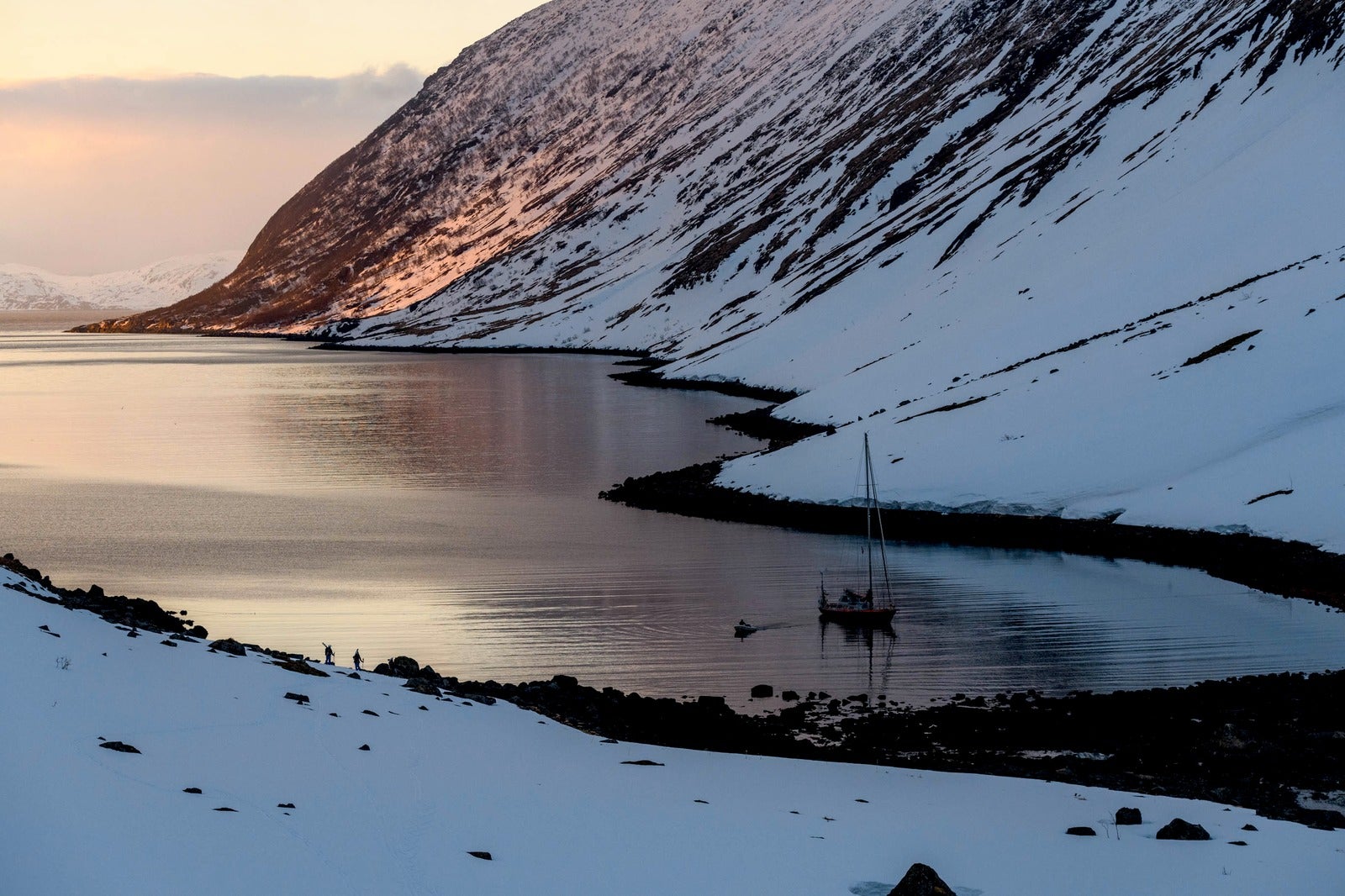 While we waited for a weather window for the crossing, we set out for some of Norway’s northern fjords for some skiing. I spent the first day of sailing (in my entire life) attempting to inhale what the hell was going on around me. This was not unlike commercial fishing for the first time, except that then we were on a diesel-operated seiner, so the net that towered over us was designed to have things flow through it—while the sail now above us was designed instead to harness mother nature to move. It was a crazy day. Everything was moving. Wind blew from all directions, waves crashed everywhere, it rained on us, and my brain was at max capacity, my ego sick of struggling to understand everything our Swiss captain explained.

He said to all of us, “Okay, point in the direction that the wind is coming from.” We all point in the wrong direction. Crash course in cold-ass crashing waves? Check.

We made it to our first anchor spot and had an opportunity to ski—and enjoyed the best snow of our entire three weeks. We skied cold powder for the first 20 turns. We then popped below the cloud canopy and skied in pink and purple light down to the ocean.

“Seven-hour sunsets frame the memories of skiing the first couloir down to our sailboat. Meanwhile Ben has “fixed” (I’m doubtful) the hydraulic auto pilot, connected our satellite phone, taken a shower (this is with a kettle of hot water on deck), and baked Sunday’s brioche bread from scratch.” 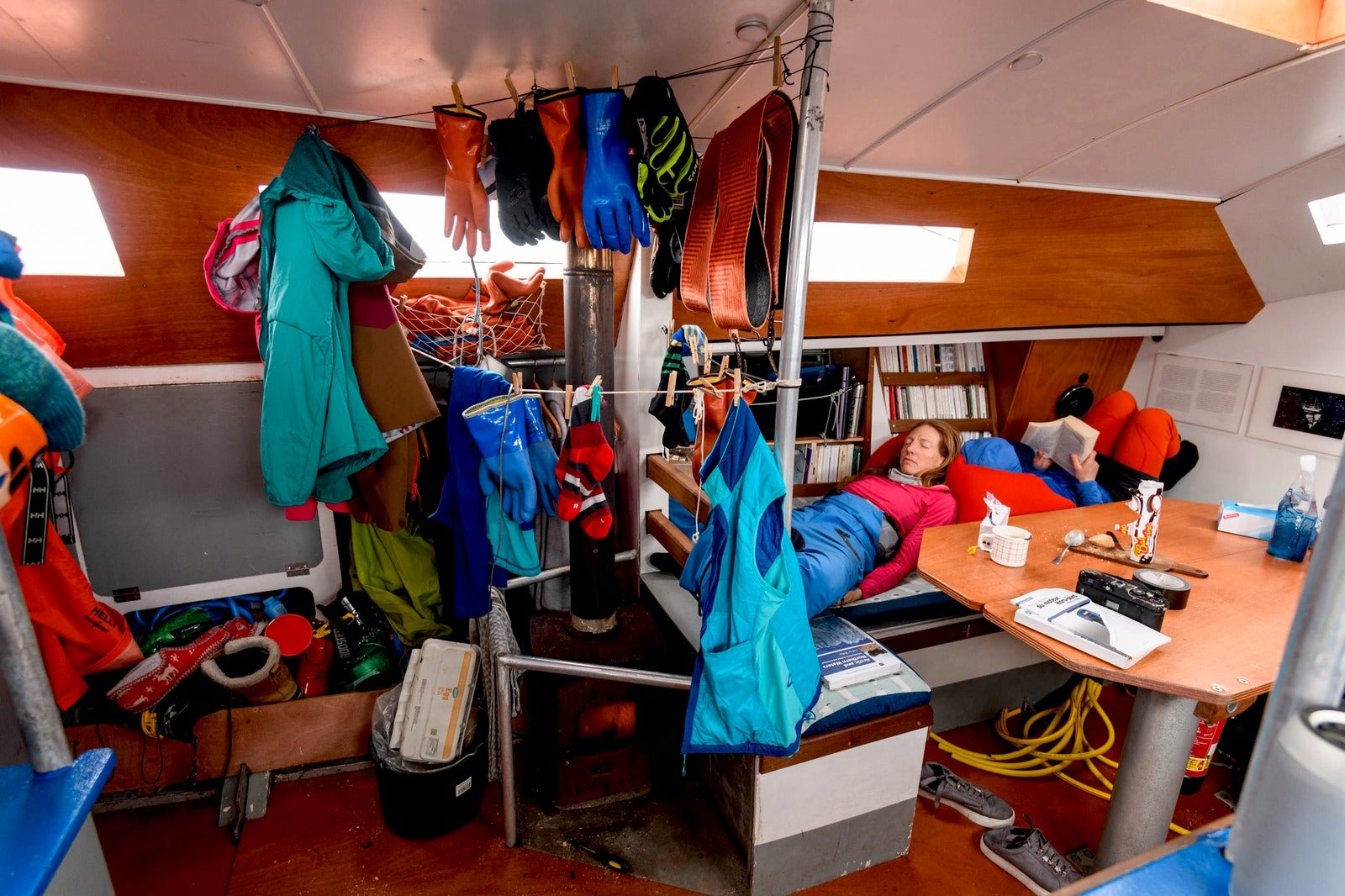 You cannot imagine how good the boat smelled when we came back and hung all of our wet gear on our little drying rack. We all gathered confidence and stoke after that day. The skiing was awesome, the boat was fixed, we were all now expert sailors now, and we excitedly waited for our window to cross.

“I’m on cloud 9,” I wrote. “The Knut has already properly been nested by the five of us: Jessica Baker, trip leader/Svalbard guide; Hazel Birnbaum, Freeride World Tour competitor/popsicle slinger; Fred Marmsater, PhD chemist turned ski photographer Benjamin Ruffieux our young skipper who has spent 50 percent of his life living on a sailboat, and myself, 100 percent out of my league.” 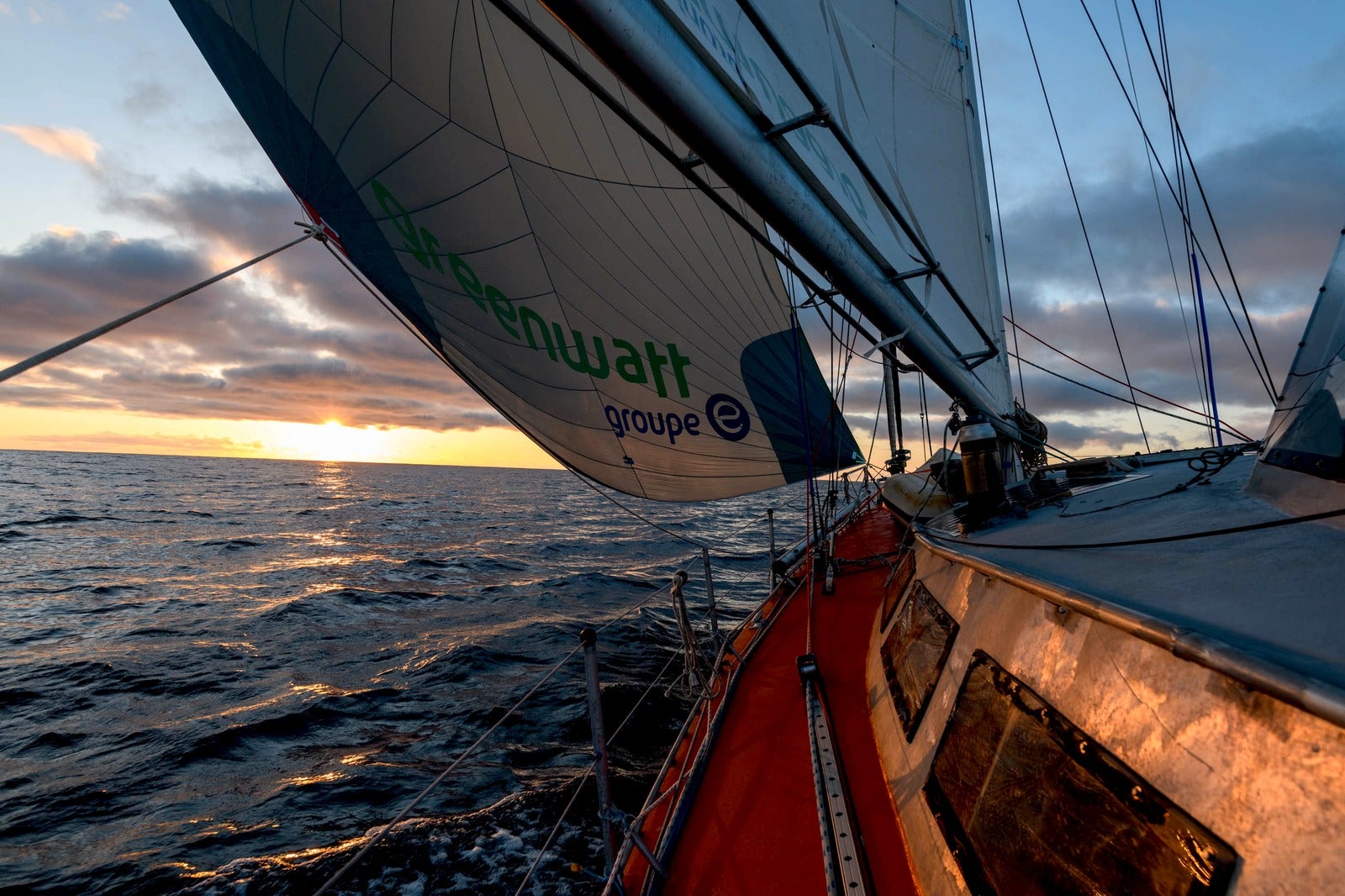 We set out to sea at 5 p.m., facing our last official dip of the sun for the trip. “I finish my shift during a glorious sunset with a full moon rising behind us from the Northern Norwegian Islands. She rose pink and swollen behind cold cliffs, marking our departure with a lunar chase.” 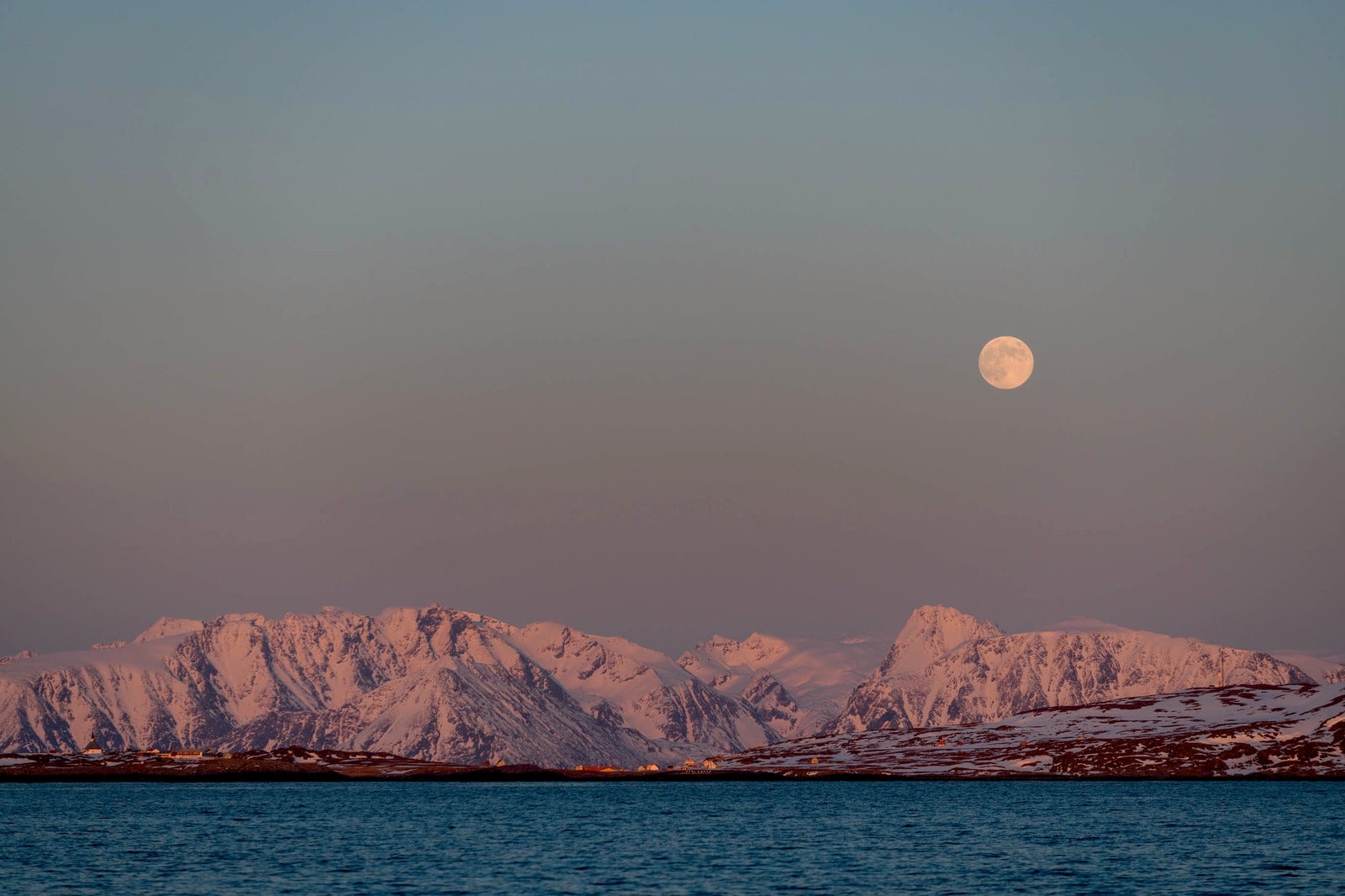 “I take the first shift … learned about holding a heading, log-book, logging pressure, don’t fall overboard when you’re on watch because no one will hear you and you’ll die, eyes on the horizon frequently, snack often, rest when you can, weather does not come out of nowhere … you’ll see it/feel it/gradually make decisions accordingly. There’s some reassurance in that, for sure. Ben said that ‘we’ll have some weather on the tail end of our crossing.’ He said, ‘It will be exciting!’ I wonder what that means?” 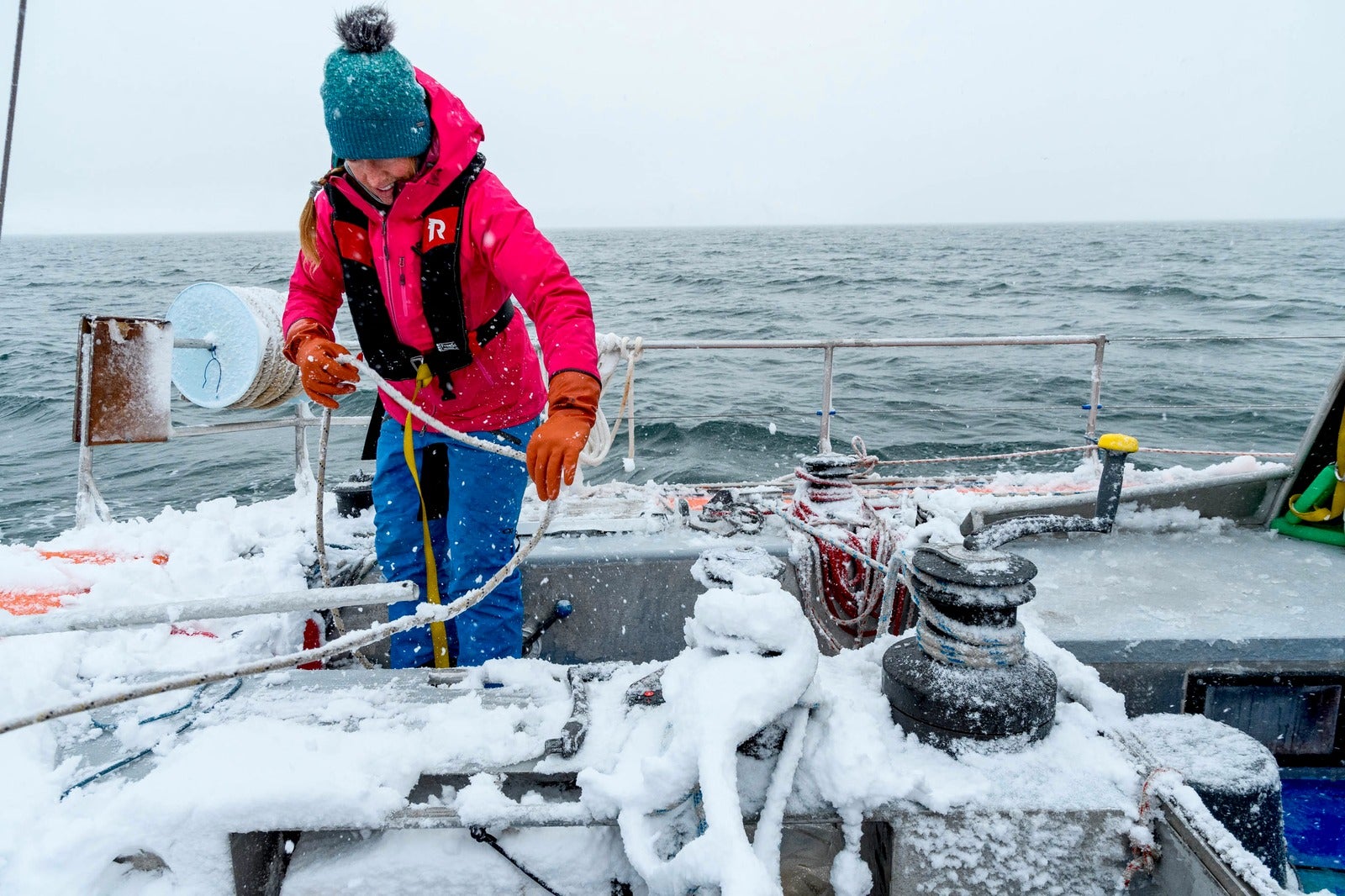 During the crossing, our 20-foot aluminum boat rocked in the waves and my thoughts did accordingly: Back to when people sailed in wooden boats and hunted whales. Forth to us being led expertly by a man who’s spent his life on a sailboat. Back to when it was impossible to check the weather forecast/wind forecast/ice charts. Forth to my fear of the wind, which we actually need to make the crossing.

“We stood silently. Exhausted, exhilarated and absolutely blown up by sheer rawness of emotion. We fought sleep or lack there of. We fought sickness, we fought violent comfort zone distortion, we fought waves, cold, weather, wind, things breaking on the boat, being tossed around, being small, being idiotic, being brave.  We crossed several bars of ice reaching out beyond the Svalbard shelf. Then we saw land. On the deck of the Knut we all watched, completely reduced to the empty space left once adrenaline recedes and awe takes its stead. We were moved to complete silence. Then Fred said, ‘Hell of a place huh?’” 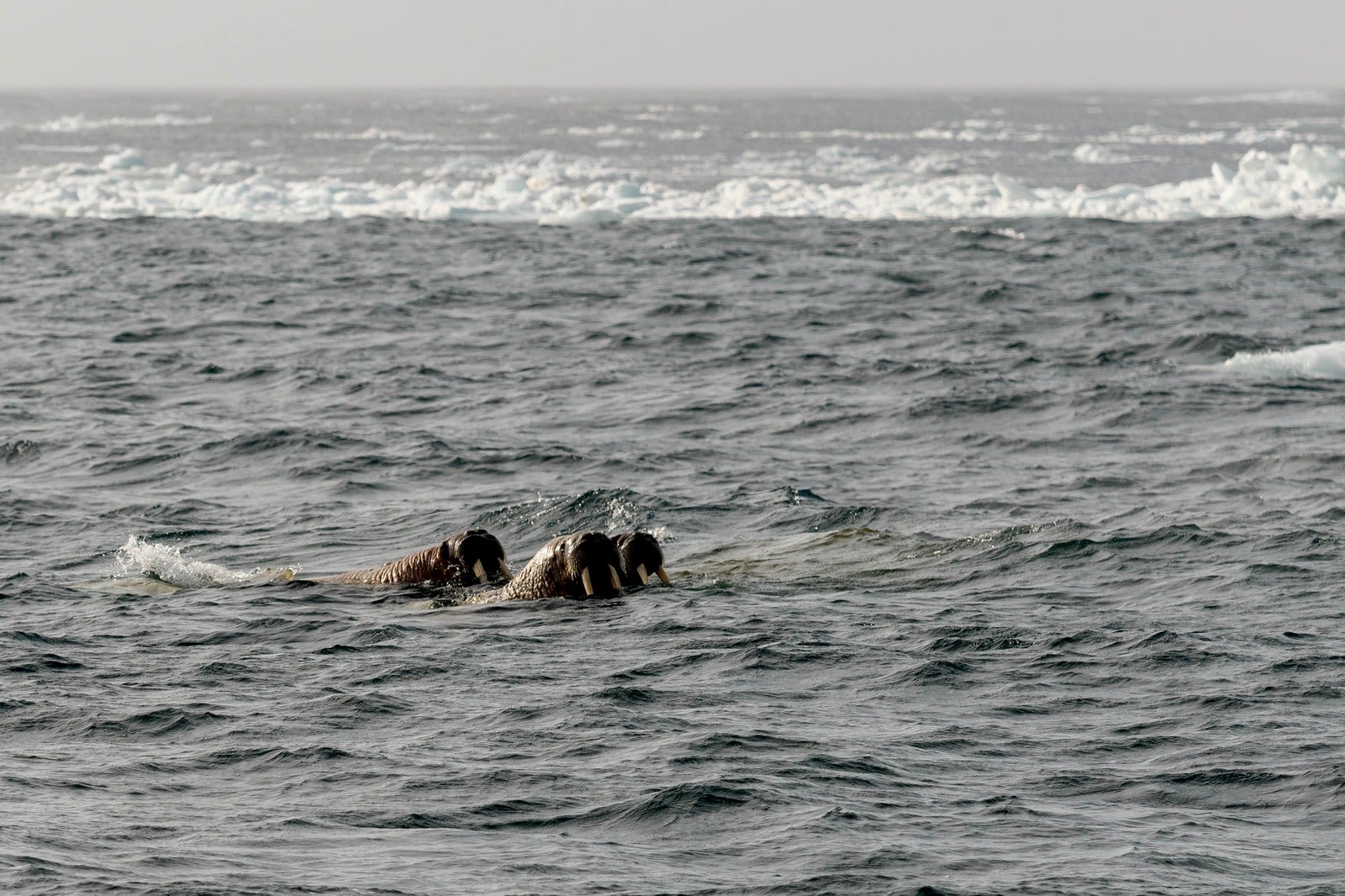 We spent several days skiing and shuffling around and exploring the Hornsund fjord of Southern Svalbard. When we originally set sail, the ice chart told us that the Hornsund was completely iced over. But when we arrived we were able to navigate into the fjord. This was extremely lucky because we waited out a two-day storm in the relative safety of the fjord. We were on constant ice watch. Ben is not afraid, and his expertise with waiting for a wind shift had us plowing through ocean water jam-packed with fast-moving ice. He would punch through ice and wait for the wind to shift. I remember thinking he was crazy, and then the wind would shift and we would suddenly be ice free. 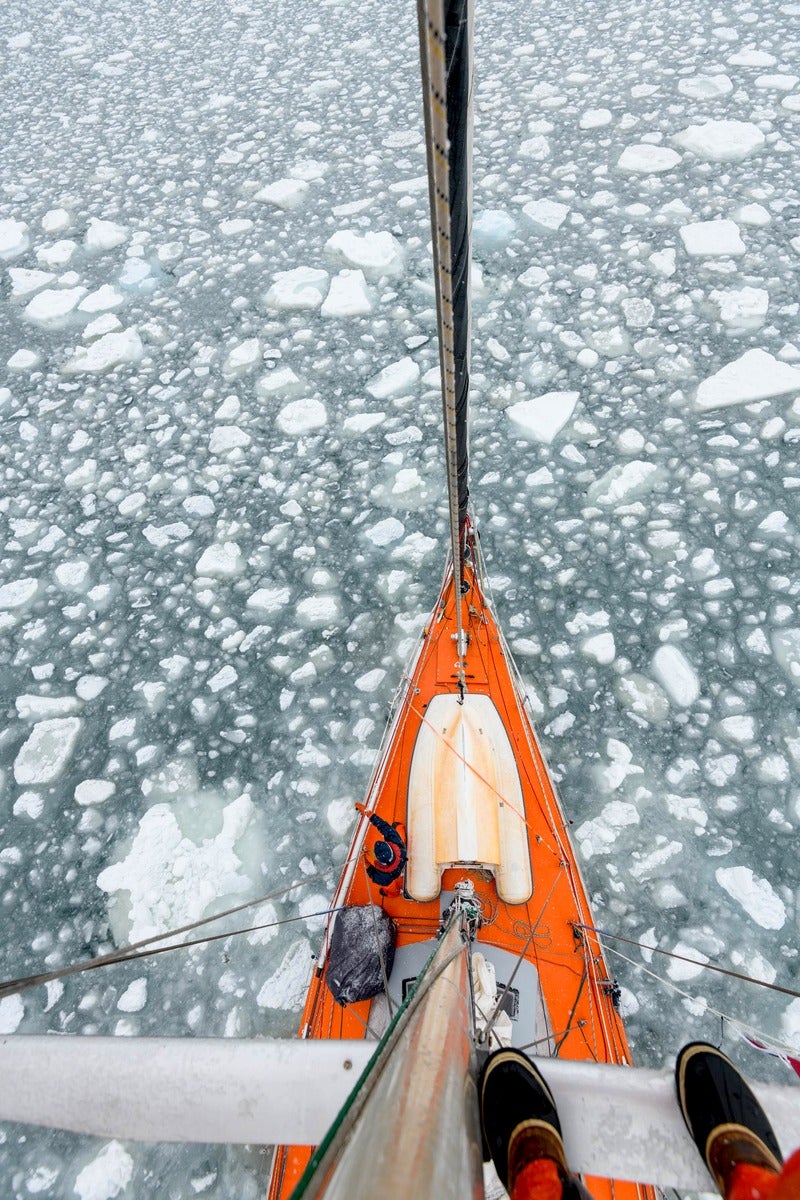 There, at the 77th meridian, the sun was supposed to be ever present, but it was extremely shy during our three weeks. When it did choose to appear out from behind the clouds, we were definitely skiing and skinning. Not seeing the sun—or, frankly, anything at all— for days at a time, made the views and the light accentuating them a show to behold. 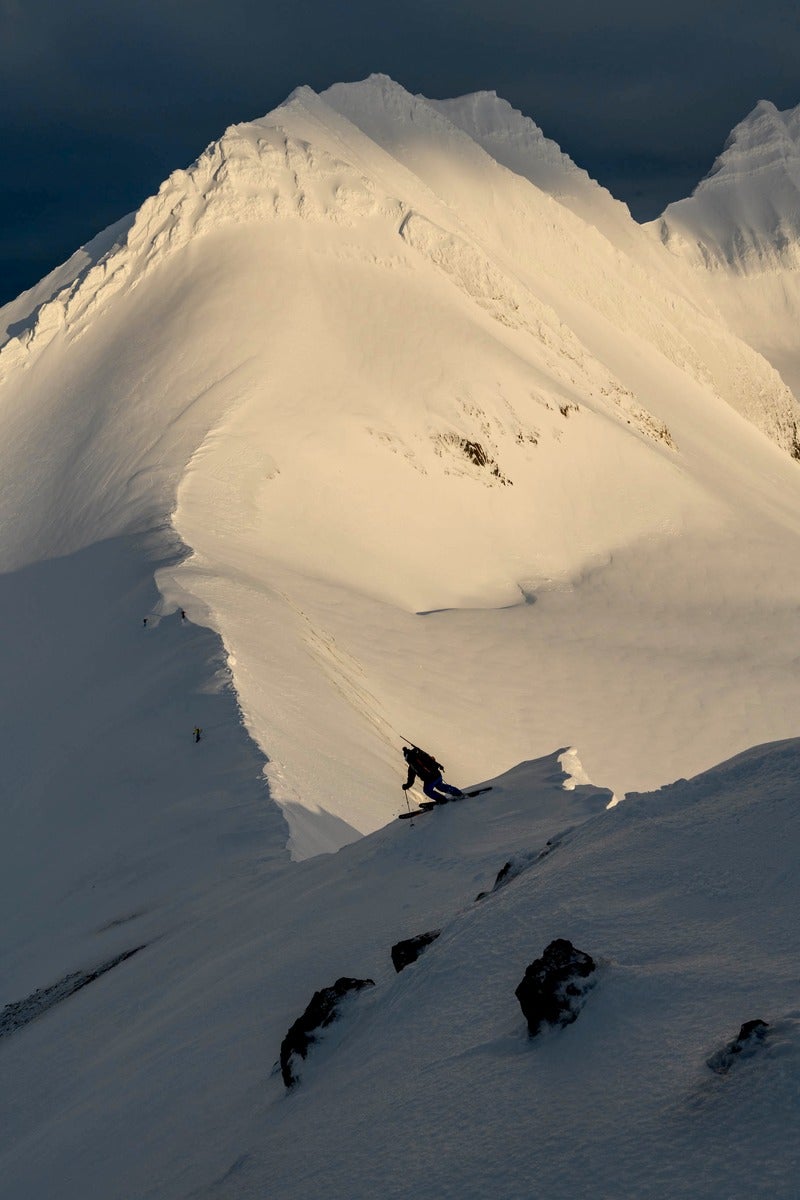 We skied on a couple of glaciers. We skied re-freeze to crazy iso-thermal snow. We booted, we skinned, we picked away with sharps, we walked on rocky and icy shorelines. The skiing was so visually mesmerizing that the snow conditions were an afterthought. Valleys of glaciers rested between sharp, white peaks for as far the eye could see. The presence of that many glaciers was nothing short of magical. We all felt hopelessly fortunate. 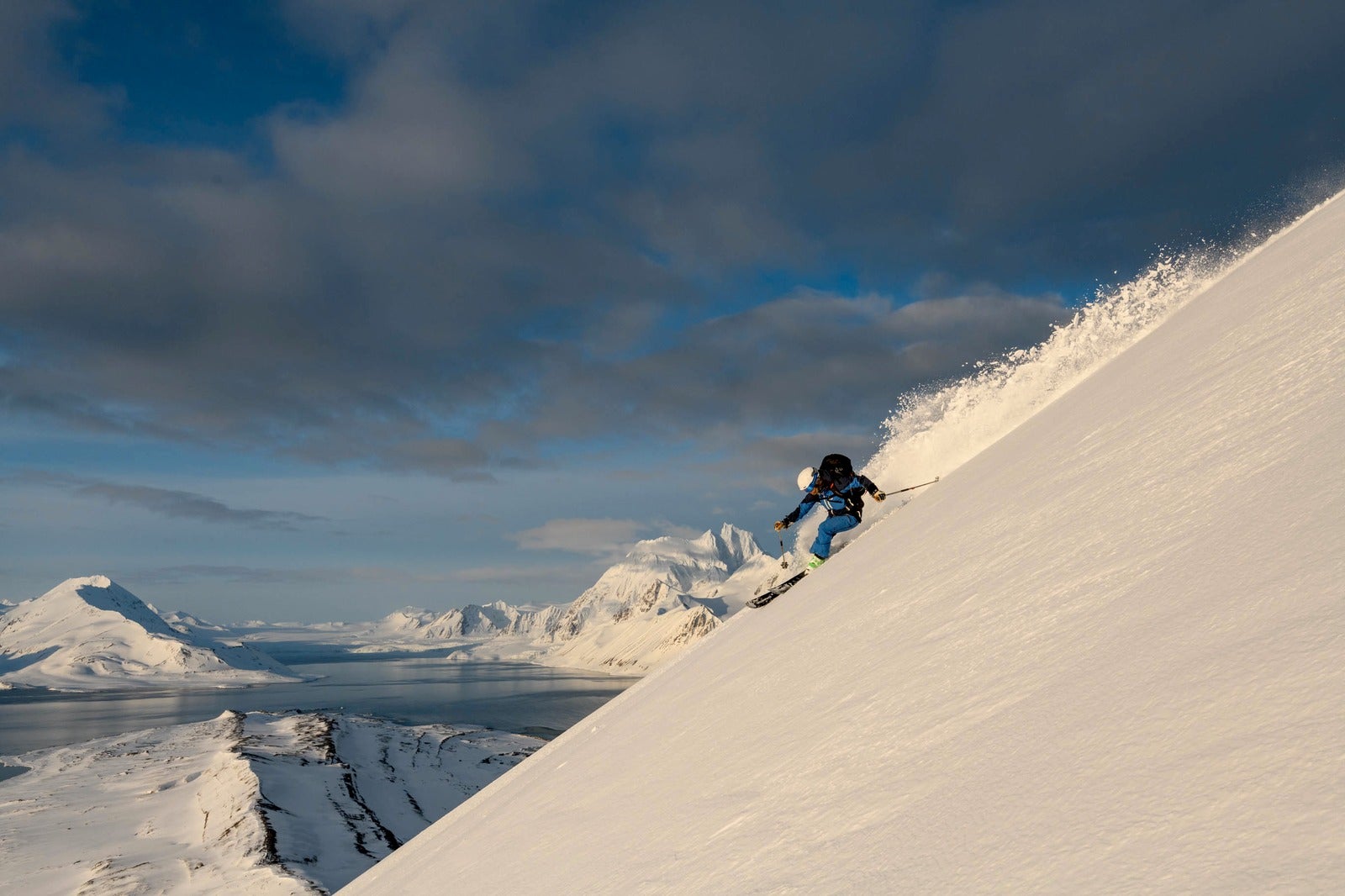 “We got to ski yesterday from 8:30 p.m. to 1:30 a.m. Bed at 3 a.m. in gorgeous sunlight. Yellow or pink to deep lavender, the light is truly showing off. It’s like the orchestra composer of light usually has only a fleeting five minutes to perform in middle meridians but has hours to perform here. It’s like jazz, a jam session of sunset and sunrise being able to show off with one another.

But our awe didn’t change the feeling that a polar bear might decide to show up at any moment. We passed scat and bear tracks, asking ourselves, “How fresh are these, really?” Turns out they were not fresh enough to have an encounter—a fact I had no problem with. We did not see a white bear, but Jessica stayed in Svalbard guiding for four more weeks afterward and saw two. 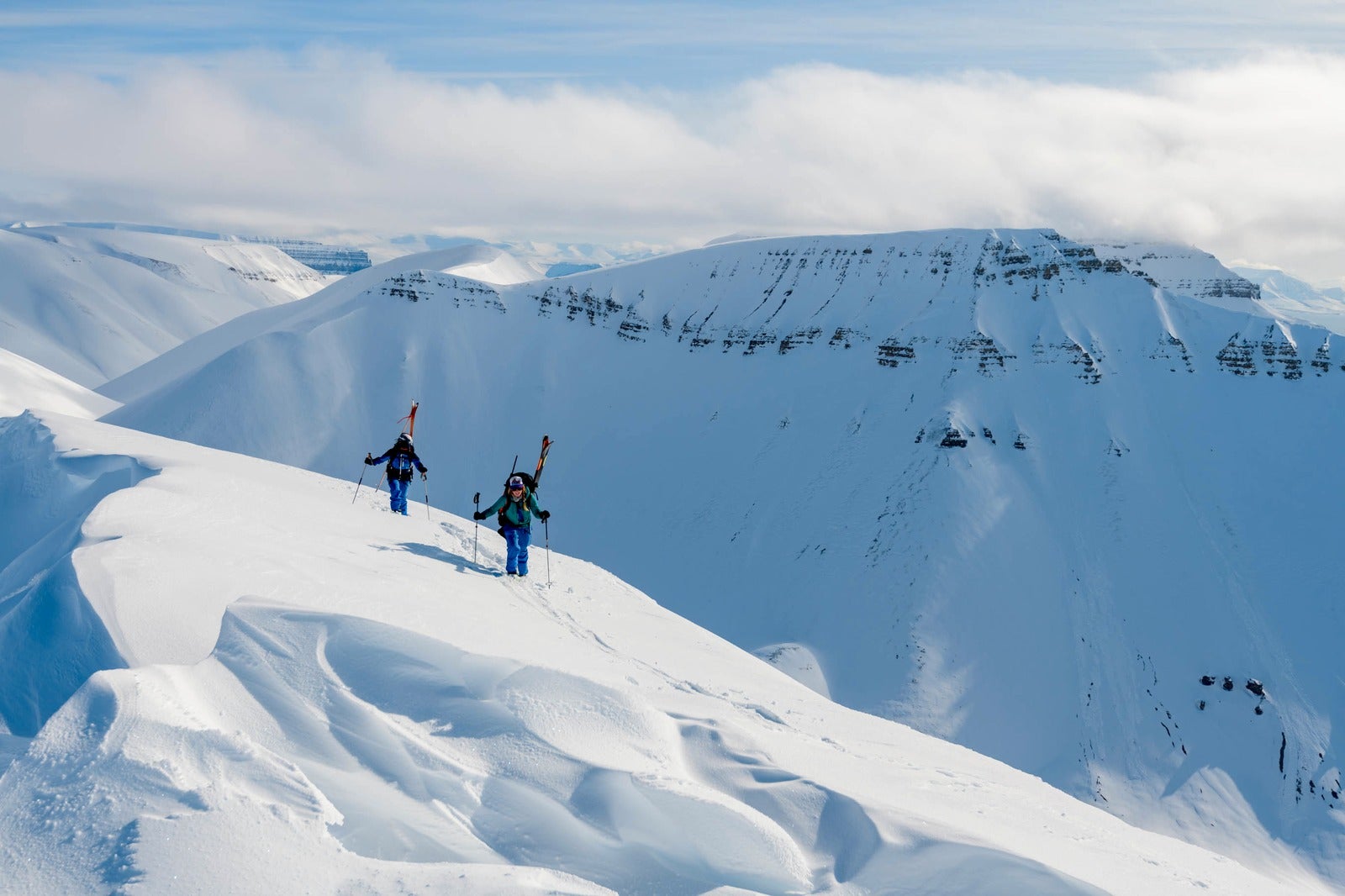 We made our way north, spending our last days skiing in Billefjorden, closer to Longyearbyen, our last day going absolutely blue. We celebrated with a polar plunge—a true polar plunge at the 78th meridian (I mean, that’s the closest I’ll ever get).

In some of the portraits of this trip, the exhaustion was real in our faces. Partly because we didn’t have anything close to resembling a schedule. If the weather was crap, we hunkered down, watched for ice, and explored anchoring spots. If the weather broke, we skied. If that happened to be at 2 a.m., 11 a.m., 3 p.m., 9 p.m., we put our gear on and went out. We were all tired. But the photos from this last day made us look like spring chickens. We hadn’t been warm or dry for three weeks—but there was something so rejuvenating about that rad ski day. We felt fresh and happy. Our final ski down was with ear-to-ear grins, loud woohoos, and big hugs and high fives when we got to the polar-bear-free shoreline. 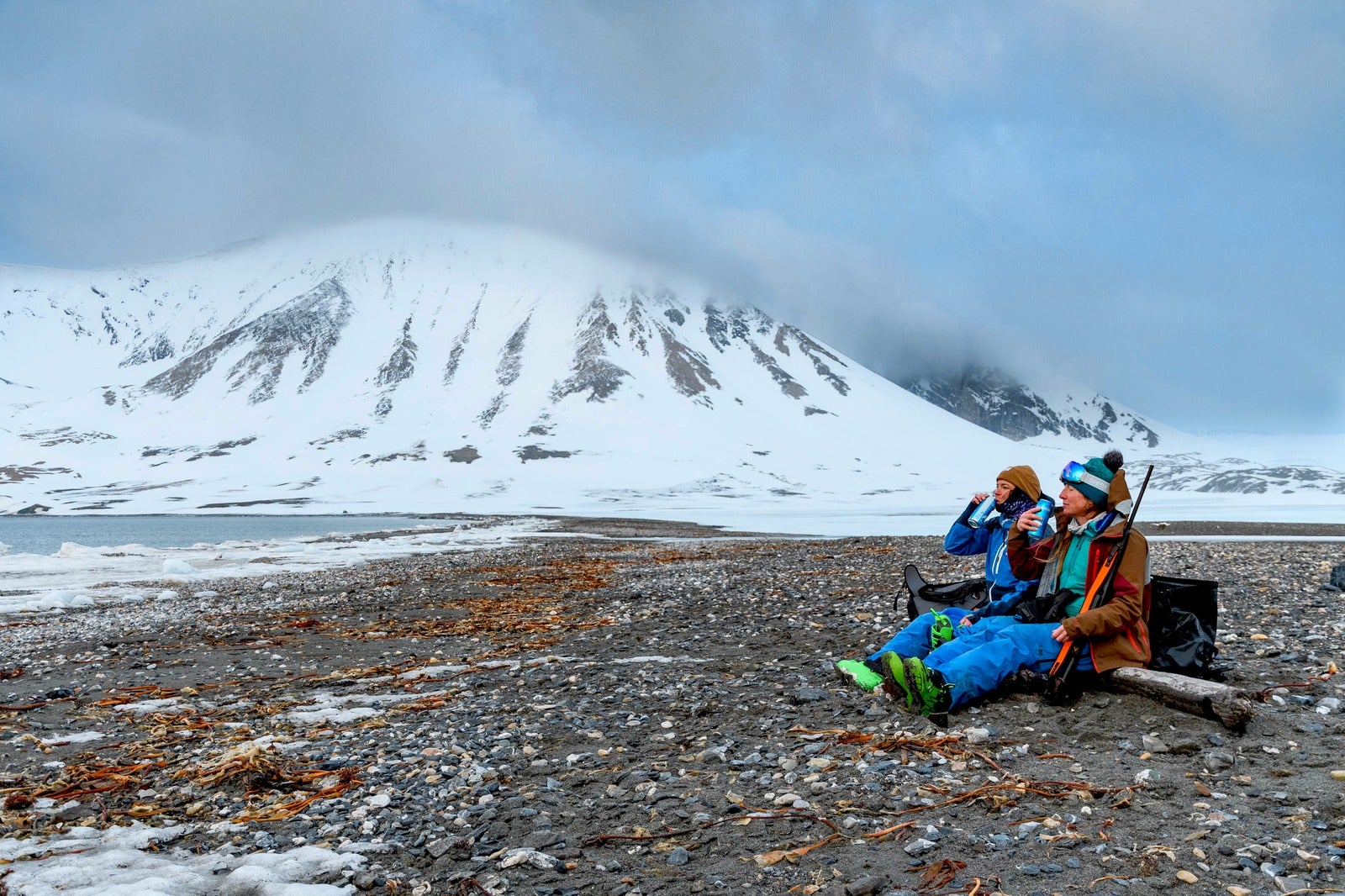 “It’s quiet, but not still. Even ice moves fast. At the top of ski lines you can hear the ocean lapping against icy shorelines. Beaching buggy-sized ice growlers like sea sculptures on display. With the stroke of sun a barren beauty unfolds her immeasurable greatness. She is rugged and treeless. She is bold and vast. She dreams of nothing as her sleep can wait for another century. For now, she lives her dream as she stands, guides, and gently feeds her glaciers and white bears.”