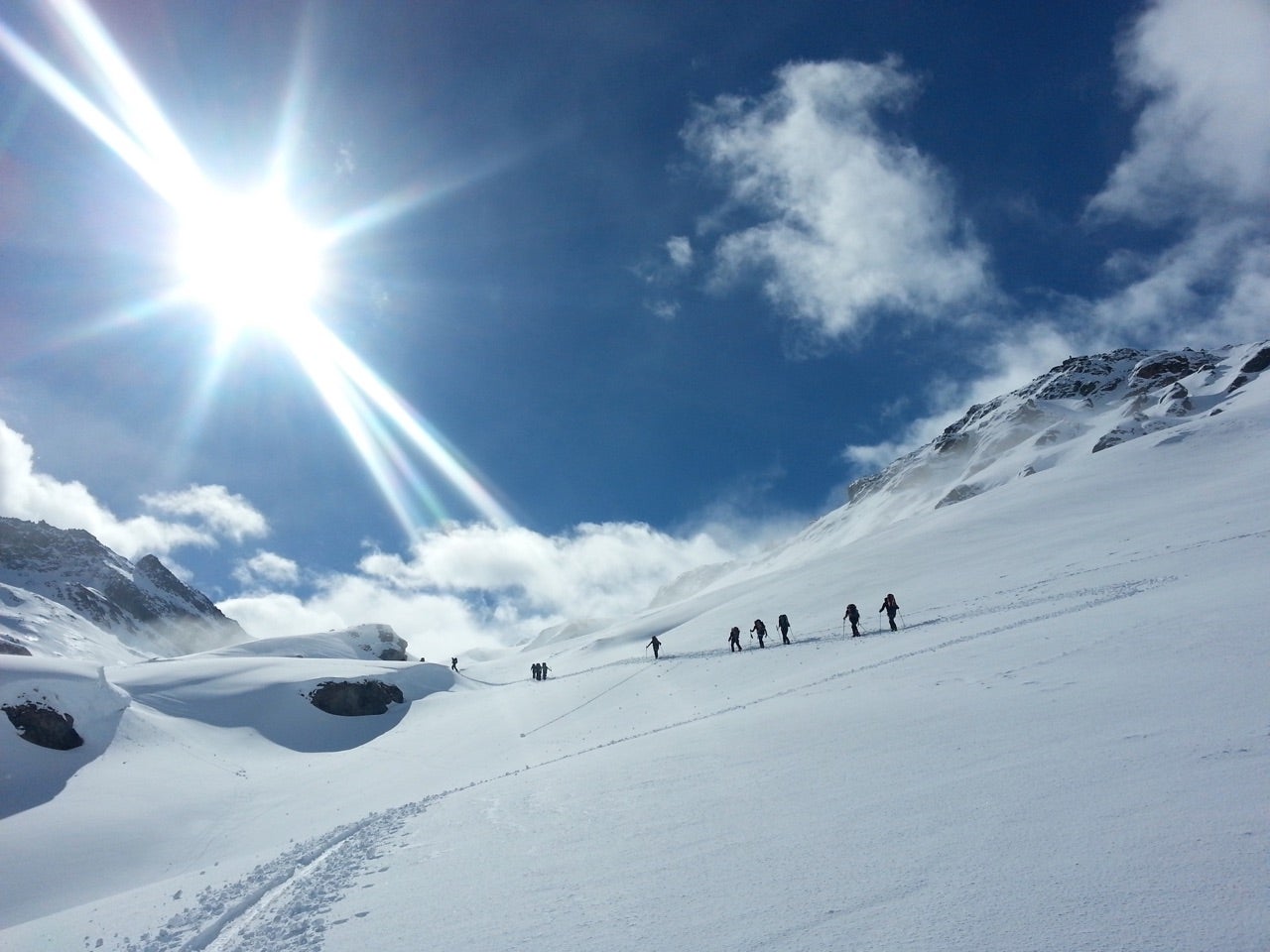 The Haute Route—or the High Route or Mountaineers' Route—is the route, with several variations, between Chamonix in France and Zermatt in Switzerland, usually done on foot or on skis. First charted as a summer mountaineering route by members of the English Alpine Club in the mid-19th century, the route takes around 12 days walking, or seven days skiing, for the 180 km from the Chamonix valley, home of Mont Blanc, to Zermatt, home of the Matterhorn. Originally dubbed "The High Level Route" in English by members of the hiking club, the name was translated into French when first successfully undertaken on skis in 1911. Since then the French term has prevailed. While the term haute route has become somewhat genericized for any of the many multi-day, hut-to-hut alpine tours, the "Chamonix-Zermatt Haute Route" remains the original, and is most often thought of as a ski tour, even tough the “walker’s Haute Route” is almost equally as popular.

When done in the spring, ski touring and glacier travel gear is required, and depending on the weather and route chosen, may require crampons, ropes and avalanche protection gear. Many variations can be done, but the original route took the skier from the Chamonix Valley across the border to Champex in Switzerland and then continued via the little town of Bourg St. Pierre to the south side of Grand Combin and then onward to the Otemma Glacier before rejoining the current “classic route” at the Cabane de Vignettes. What is now called the “classic route” heads a bit further north through the ski resort of Verbier before heading back south to the southern crest of the Alps near the Vignettes Hut.

Depending on what variation you take, the Haute Route crosses 11 glaciers on its way from Chamonix to Zermatt at an average elevation of 3,000 meters—and you might end up skiing in three different countries. The Swiss Alpine Club huts (Cabane de Trient,Mont Fort, Prafleuri, Dix and Vignettes) are sophisticated by US standards, and the mountains are more alpine in character than anything in the lower 48 states. You can pack your pack small enough to let you enjoy the skiing even at the highest elevations of the trip. Plus, the multi-cultural exchange makes this trip unique. I will say that hiring a guide is worth serious consideration, since the logistics around the route can get very complicated, especially when the weather does not fully cooperate. Remember, the classic Haute Route is almost entirely in high alpine terrain where the generally moderate nature of the trip can take on a very serious note in poor weather.

Here is what a Haute Route itinerary might look like, but please keep in mind that there are quite a few variations available. 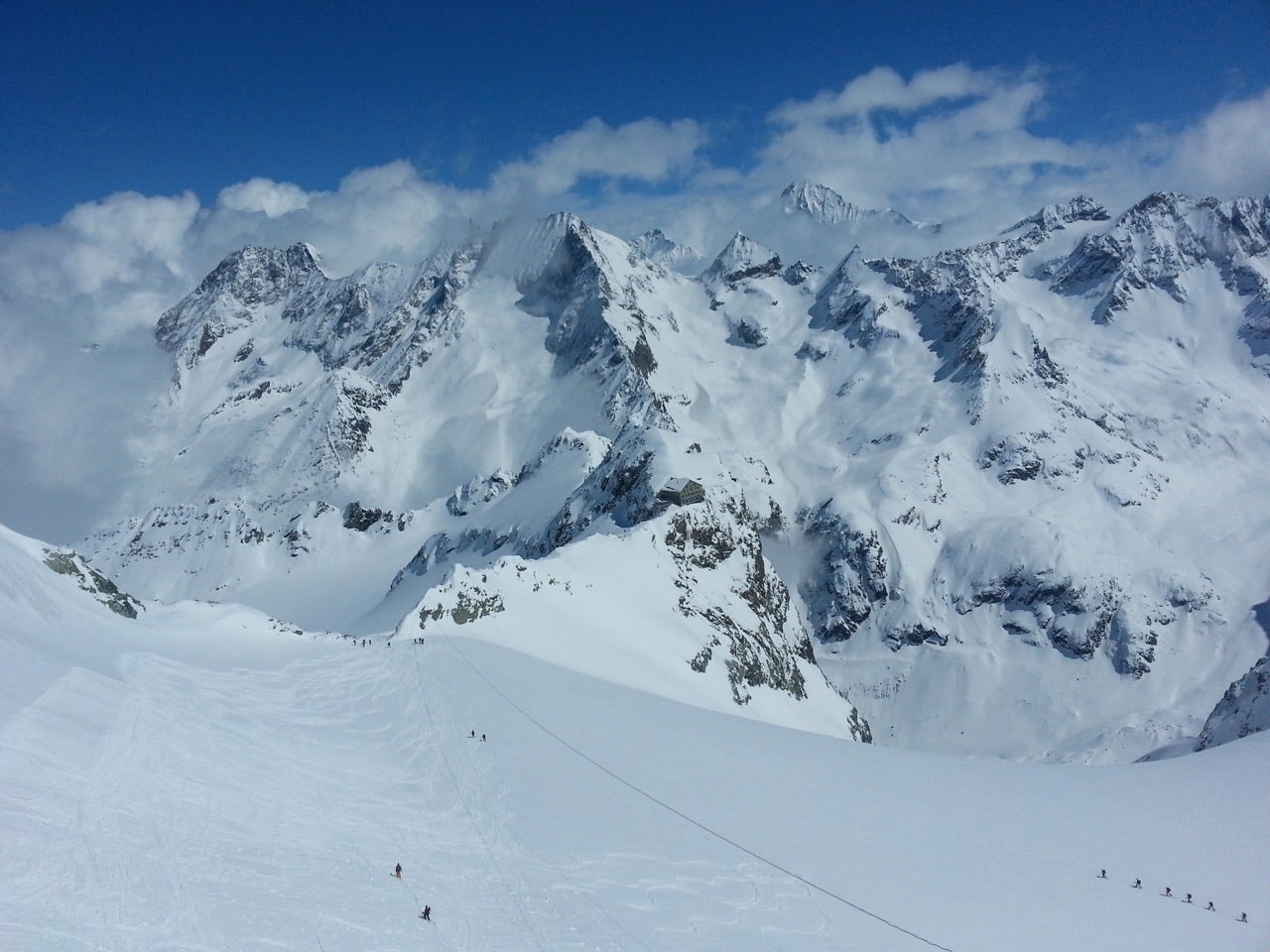 Our trip actually starts out the afternoon before the first day on the tour. We meet our guests in the lobby of the Hotel de l’Arve, a very comfortable and quiet three-star hotel in the center of Chamonix. After a casual meet and greet we go through a gear check and make sure all questions are answered.

RELATED: So You Want To Climb In The Alps

The first day of the tour we catch the first gondola in Argentiere. We generally transfer by bus from Chamonix to Argentiere, since the bus stop is located about 100 meters from the hotel. We ride the cable car to the Grands Montets (3297 m) and ski down to the Argentiere Glacier (2500 meters). From there we start the tour in earnest by touring up to the Col du Chardonnet (3323 meters) and on to the Trient Hut (3170 m). This is actually one of the more strenuous days of the tour, so good fitness and proper acclimatization before the trip will make a big difference.

The nearly 2000-meter ski descent from the Trient Hut to Champex (1477 m) is outrageous. Who doesn’t like to start a ski touring day with a long descent? After about five minutes of skiing we’ll ski past a spectacular ice fall on the side of the Trient Glacier, then ascend for about five minutes on crampons to the Col des Ecandies at 2793 meters. The following descent of the Val d'Arpette into the little town of Champex leads straight to a bakery where a taxi will pick us up and drive us straight to Verbier. We will stop in for a short break in Verbier and then continue on to the Mont Fort hut in the middle of the ski area. All in all, this is probably the least strenuous day of the Haute Route, but it is very eventful, since it involves skiing, crampons, coffee, taxi rides, multiple gondolas, a world class resort and to cap it off an evening in the beautiful Mont Fort hut. 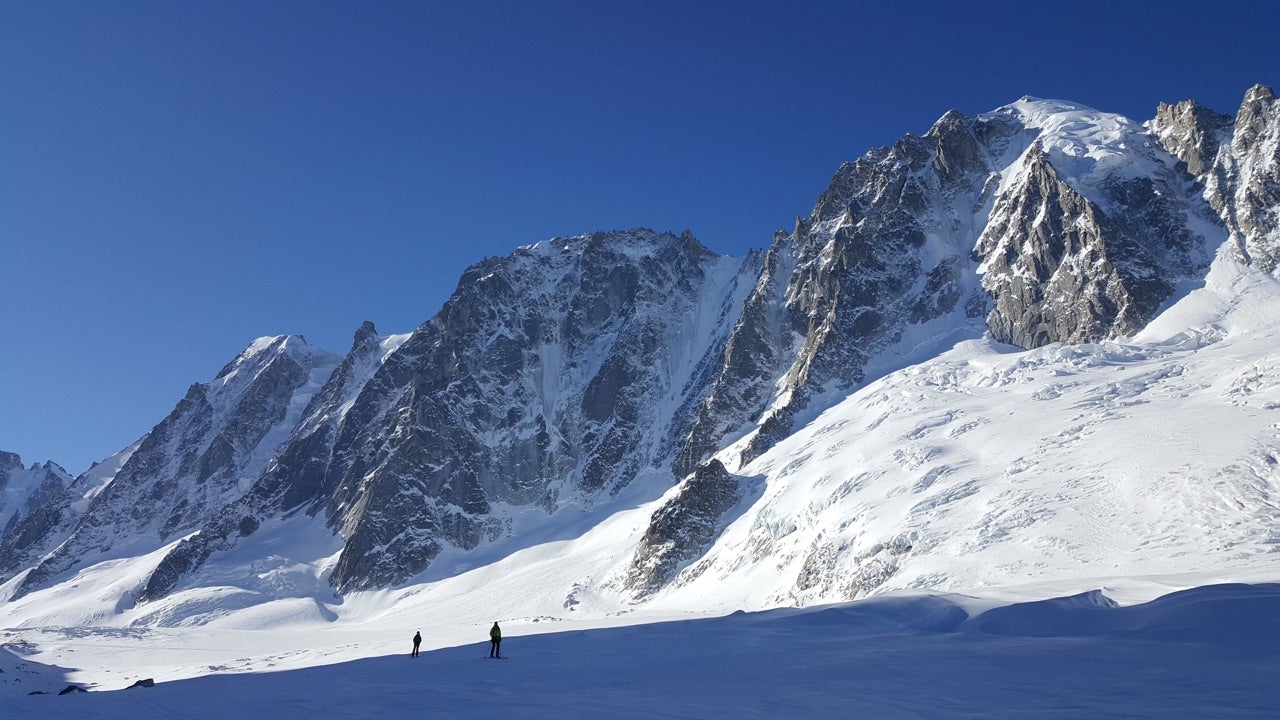 We will tour to the Prafleuri Hut via the Col de la Chaux and the summit of Rosa Blanche (3336 meters). The tour starts with a mellow initial climb up the generally freshly groomed slopes of the Verbier ski area for about 1000 feet of vertical gain, before heading up to the Col de La Chaux proper at 2940 meters. The following terrain reminds some people a bit of the Whistler Blackcomb backcountry. Beautiful, but it does not have the edgy grandeur of the terrain closer to the southern crest. Of course the summit of the Rosa Blanche will give us a spectacular view into that terrain. From the summit we will ski down the Glacier de Prafleuri to the Cabane de Prafleuri at 2624 meters.

Day four: We get to leave the Cabane to Prafleuri with our headlamps on, which is always a cool experience. The first ascent takes us up about 1000 vertical feet up to the Col de Roux. We get the early start because of the large east-facing slopes looming over us while we traverse above the Lac de Dix. This "traverse" is really a mixture to skiing on a sidehill, some traversing and some "poling." It takes about 1.5 hours. From the south end of the lake we ascend a short, steep section (Pas de Chat) to get to the lower reaches of the Glacier de Cheillon and up the last little bit to the Cabane des Dix (2928m).

From the Cabane des Dix we will tour over the Pigne de Arolla (3796m) and ski down to the Cabane de Vignettes (3157 m). Less distance, more vertical is the name of the game. We will also reach our highest elevation of the tour at nearly 3800 meters, but by this time everybody seems to feel fine at altitude. The sunrise on the 1000 meter north-east face of the Mont Blanc de Cheillon is unforgettable and we’ll be touring right under it on our way up to the mighty glacier plateau of the Col de la Serpentine. Glaciers flow away from this plateau in every direction (Glacier de Cheillon to the north-west, Glacier de Tsijiore Nouve to the North, the Glacier the Brenay and Glacier de Serpentine to the South) and the summit of the Pigne d'Arolla looms over all of it. So good visibility is important, since navigation can become tricky. If this weather does not cooperate, we can "go around the PIgne d'Arolla" via the famous iron ladders across the valley from the Cabane de Dix to gain the Pas de Chevres. From there we have the option to ski all the way down to the cool little town of Arolla and continue via the famous Cabane de Berthol or get to the Cabane de Vignettes via the gentle Glacier de Piece. The location of this hut will blow you away. 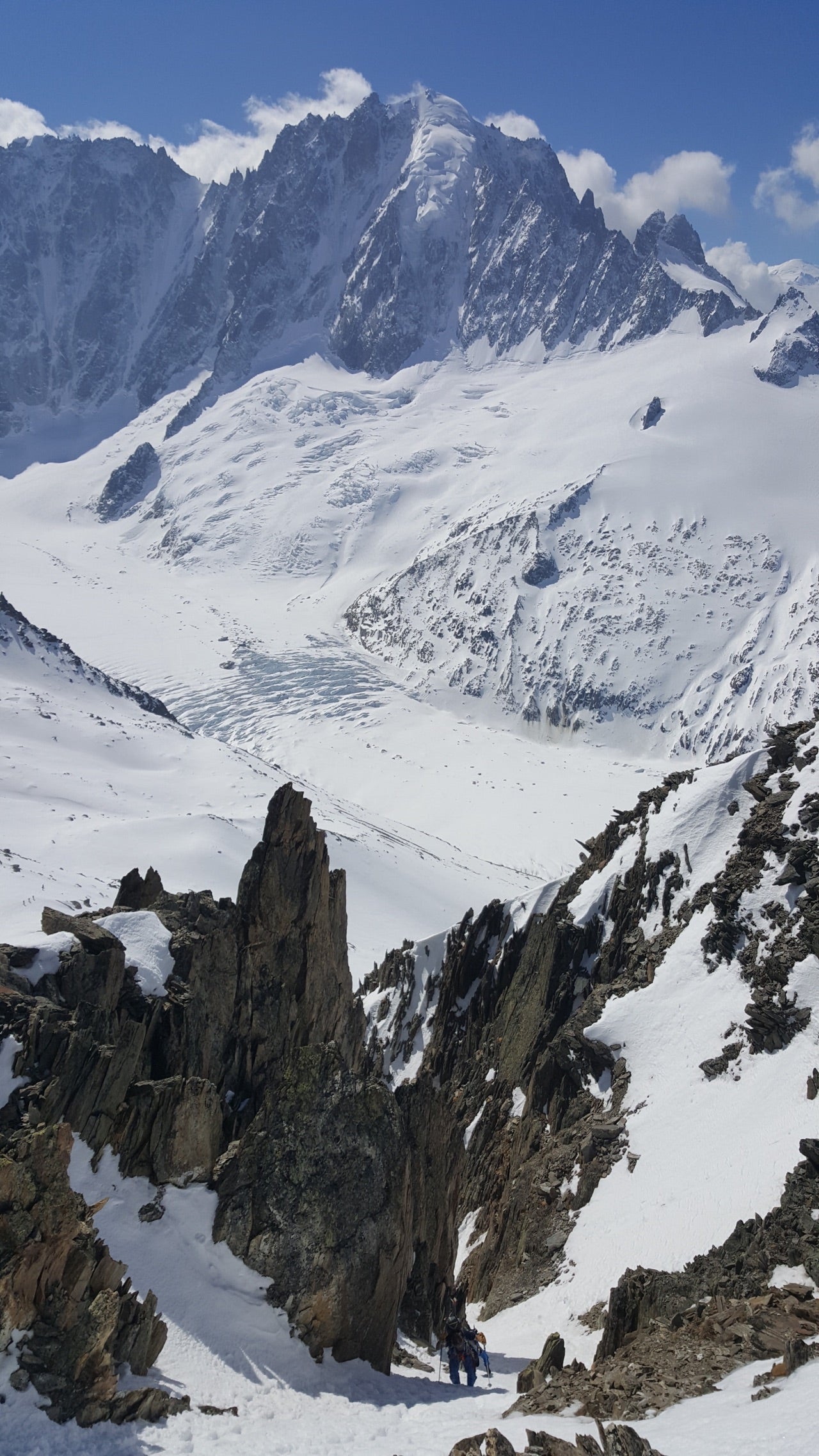 A predawn start gets us going from the Vignettes Hut to the Col de l'Eveque (3392 m), on to the Col du Mont Brule (3213 m) and Col du Valpelline (3568 m). From here awaits the 6500-foot descent right underneath the North Face of the Matterhorn. We cover more distance on this day than the others, but a huge portion of the distance is the unforgettable descent into Zermatt. We start out by touring across the Col de Charmotane and up the gentle slopes of the Glacier de Collon. The terrain feels very wide open and vast during this initial ascent to the Col de l'Eveque at 3377 meters. From here we actually enter Italian territory for about 300 meters before crossing back into Switzerland and then descend to the Glacier d'Arolla. From here we tour to the base of the Col du Mont Brule at 3213 meters. Sometimes we can tour the last steep slope (about 35 to 40 degrees), but most of the time it involves putting the boot crampons on and carrying the skis on our pack to the actual col on a good bootpack trail.

Then it’s back into Italy now on the Haute Glacier de Tsa de Tsan. This portion of the tour takes us across the upper portion of this long cirque glacier with the dramatic "Bouquetins" (essentially the Ibex towers) looming above and besides. Then the last ascent to the Col de Valpelline at 3554 meters can be a bit tough, but at this point we are almost there and the view of the Matterhorn from the Col is worth the effort. We also switch back into Switzerland and into the German speaking part of it. This is my home valley and I always feel especially privileged to guide people down the Stockji, Tiefmatten and Zmutt glaciers under the larger-than-imaginable presence of the Matterhorn. What makes this descent so unforgettable is that it is like some sort of an unveiling of the Matterhorn. We start out with the dark and powerful west face of the Matterhorn is dominating the scene. Once on the Zmutt glacier, we’re literally under the north face and not until we are but a few minutes from beer near the beautiful Stafelalp does the Matterhorn present itself from its super classic vantage. At the Stafelalp we join the ski area coming down from Schwarzsee and the biggest challenge now is to make it down to the town of Zermatt without getting stuck in one of the awesome slopeside bars.