Why The World Needs An All-Female Climbing Film 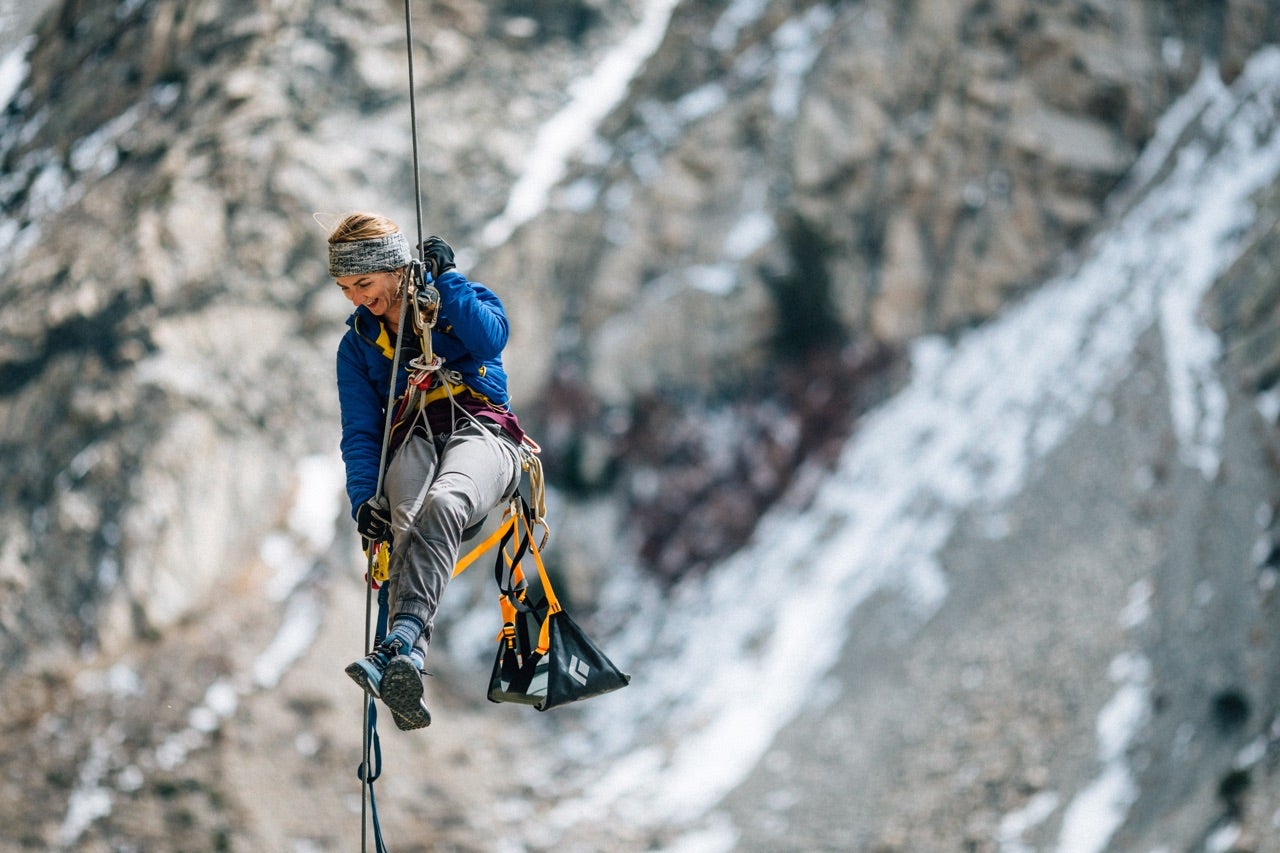 Julie Ellison, former editor of Climbing Magazine, is part of the Never Not Collective, an all-female media collective that's set out to make the first all-female climbing film, Pretty Strong. Their Kickstarter for the project was a smash success, and now they're in the thick of filmmaking—with the goal of launching next spring/summer. We caught up with Julie to hear about why they decided to go all-in on this film, and how working in a group of women helps dispell the fears they might have as individuals. Here's what she had to say.

On the first time she remembers being inspired by a female climber in a film.

What comes to mind for me is Beth Rodden in Dosage V, released in 2008 by Big Up productions. She demolishes all these Yosemite hard lines while ramping up to her big send of Meltdown in Yosemite, a 5.14c first ascent that has been up for 10 years (as of February this year) and has yet to see a repeat by anyone, male or female. I remember my hands sweating watching her on that super-thin crack, while her feet and legs were shaking and she was screaming from fear/try-hard. That was a real aha moment for me, seeing a woman so strong and seemingly invincible showing some vulnerability on a climb at her limit. Previously I had seen all these dudes climbing hard routes, grunting and muscling through stuff, and it was like, “meh, whatever, they’re just strong dudes, they should be climbing hard.” I couldn’t connect to them because I would never climb like them. Then I saw this petite woman really giving it her all on a techy, scary trad climb, and I could sort of put myself in her shoes. That made all the difference for me. 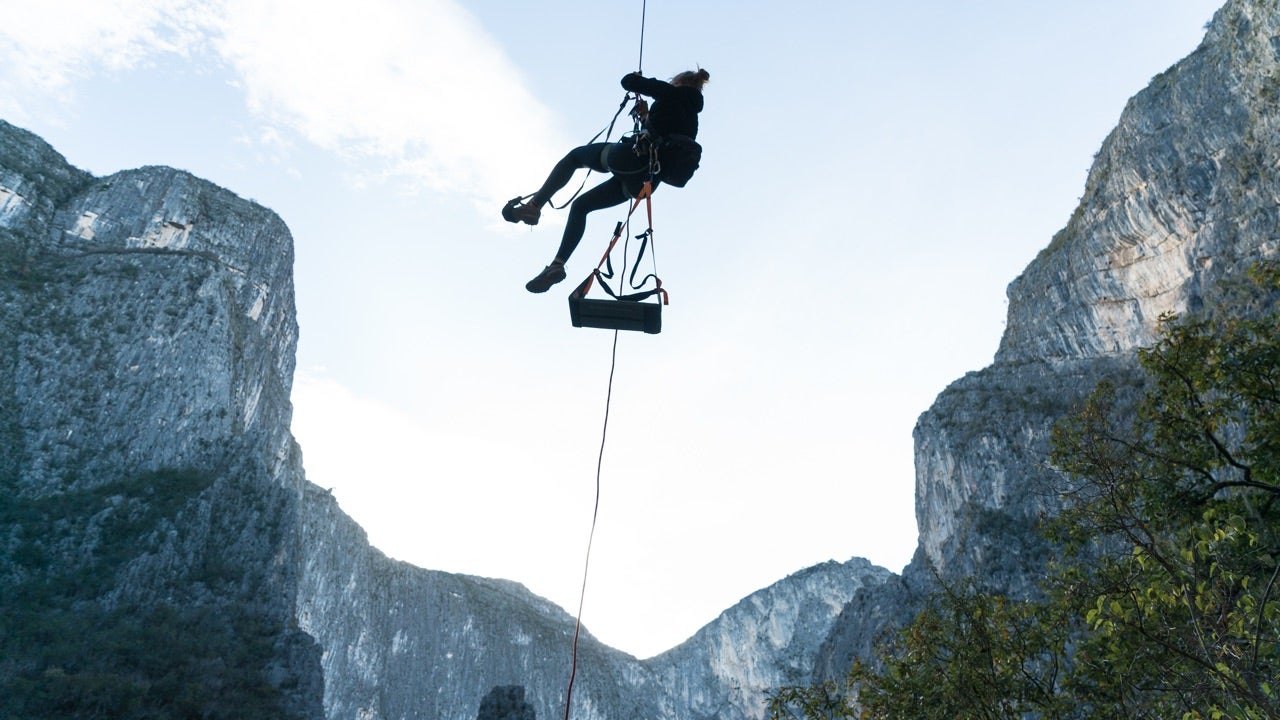 On why it's important to see women in climbing films.

It’s hugely important for viewers to be able to connect to who they’re seeing on screen and in other forms of media. Even if it’s just to say, “Hey here’s someone who looks like me doing this incredible thing. If she/he can do it, maybe I could too!” I connected with Beth as a female, as someone who knows she’s strong but still doubts and questions herself because it’s human nature. Film in particular has this very visceral quality, where you have all these elements of sense playing a bigger role than just words and photos. You tie the sounds with the sights and add in texture for touch, and you get this whole package of sensory storytelling. And I think audio can make all the difference: hearing an athlete’s shaky breathing or involuntary grunts can do much more to convey the truth of a moment than just seeing a hard move without sound, which to be honest, most elite athletes will make those hard moves look easy anyway. But their breathing and audial reactions can give them away!

On why there have been so few women in climbing films so far.

It does come down a bit to a numbers game, in that most climbing filmmakers until now have been men. Just the way we as female filmmakers gravitate toward putting women front and center because that’s who we’re inspired by, I think men do the same. Plus climbing films are a relatively new thing, they’re only a few decades old, and just like with the sport of climbing itself, as we’re seeing more and more women climbing, I think we’ll see the same when it comes to female media makers. 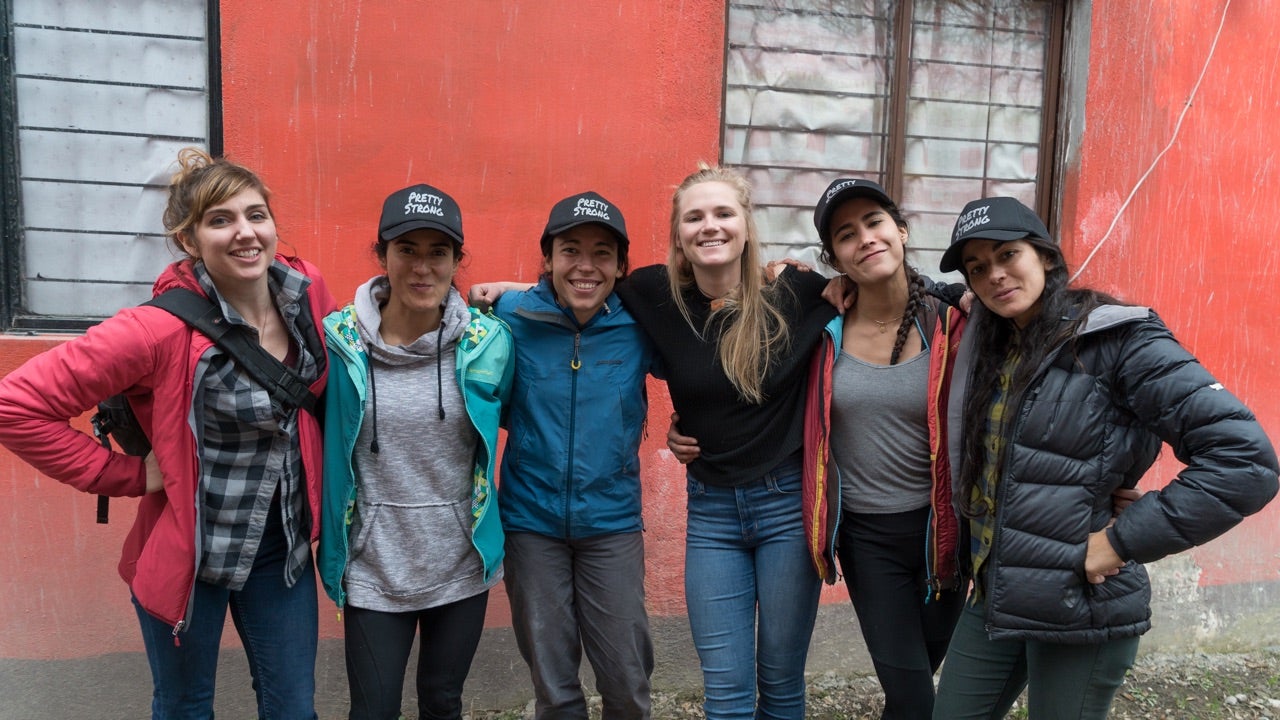 One other reason is that for the longest time, if you looked at the pure numbers/grades in climbing, women weren’t climbing as hard. The first consensus 15a was climbed by Chris Sharma in 2001; it took more than 15 years for a woman to climb a confirmed 15a (Margo Hayes, 2017), and then a few months later, a woman climbed the first 5.15b (Angy Eiter, 2017). There was a big gap in the pure number difficulty that men were climbing and women were climbing, which could mean that men, who were climbing the highest grades, were more likely to be the subject of a film. These days, not only is that pure-number difficulty gap closing, but also I think the very definition of “achievement” and “difficulty” in the climbing world is shifting and opening up to include more than just hard grades—it’s a super exciting change for all of us.

On the response to the Pretty Strong Kickstarter.

Two words: hot damn! But really, it was overwhelmingly positive and supportive. We had climbers of all levels, from all over the world, with different backgrounds, reaching out to support the project and say how psyched they were on this project. Obviously that worked well for our Kickstarter, which was successfully funded in a few days, but more importantly, it was this forceful confirmation that this wasn’t just a project that we as individuals had always wanted to see—it is something that is truly wanted and needed in our community. That has been the best realization of all.

RELATED: The Psychology of Climbing With Women 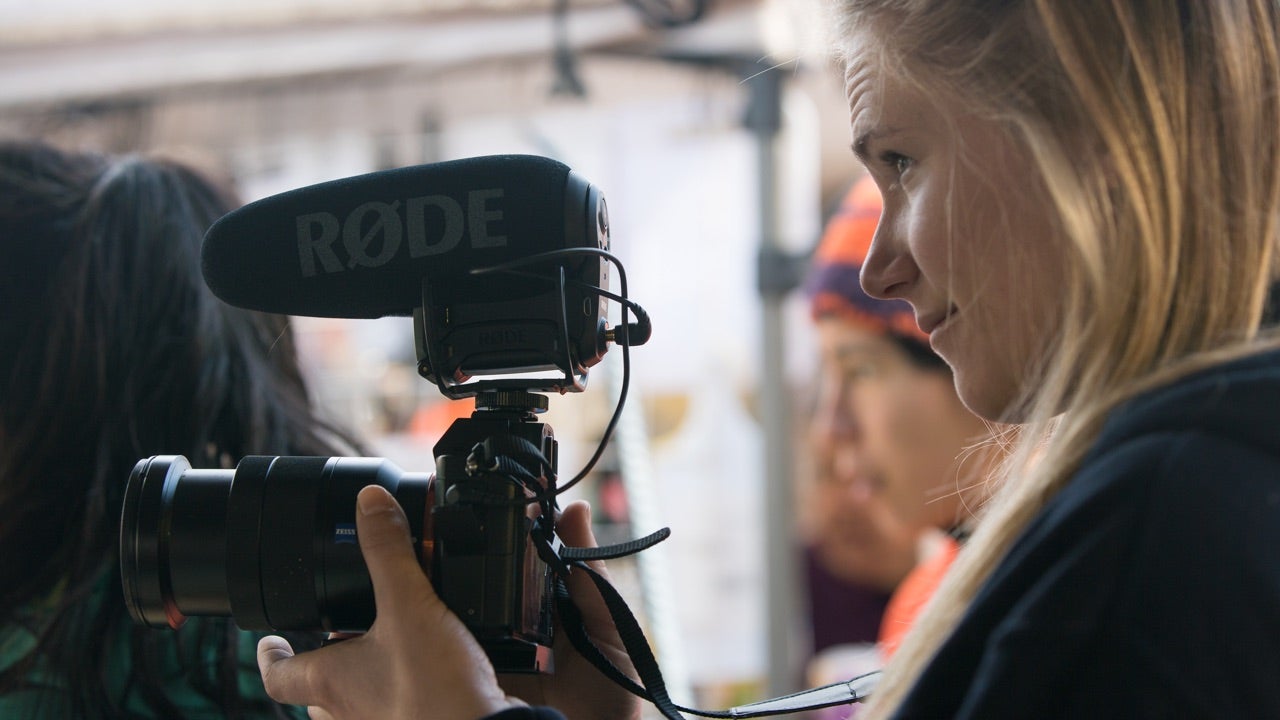 I don’t want to sound cocky, but from the very beginning we all just ran with it. I think being a group was the deciding factor in that case. If I were trying to do something like that alone, I’m sure I would have broken down under the pressure at some point in the process, but there’s something about being in a group of absolutely badass women who you have the utmost respect for, where you do feel invincible. We had each other to lean on in times of stress, and to share the bajillion responsibilities we had. Each of us pulled more than her fair share. With a supergroup like Never Not, there’s an element of trust and accountability you don’t get when you’re solo. I am constantly trying to earn the respect of my NNC cohorts, so I’ll do whatever it takes to do the job and do it well. That mindset allows very little space (or time!) for fear. 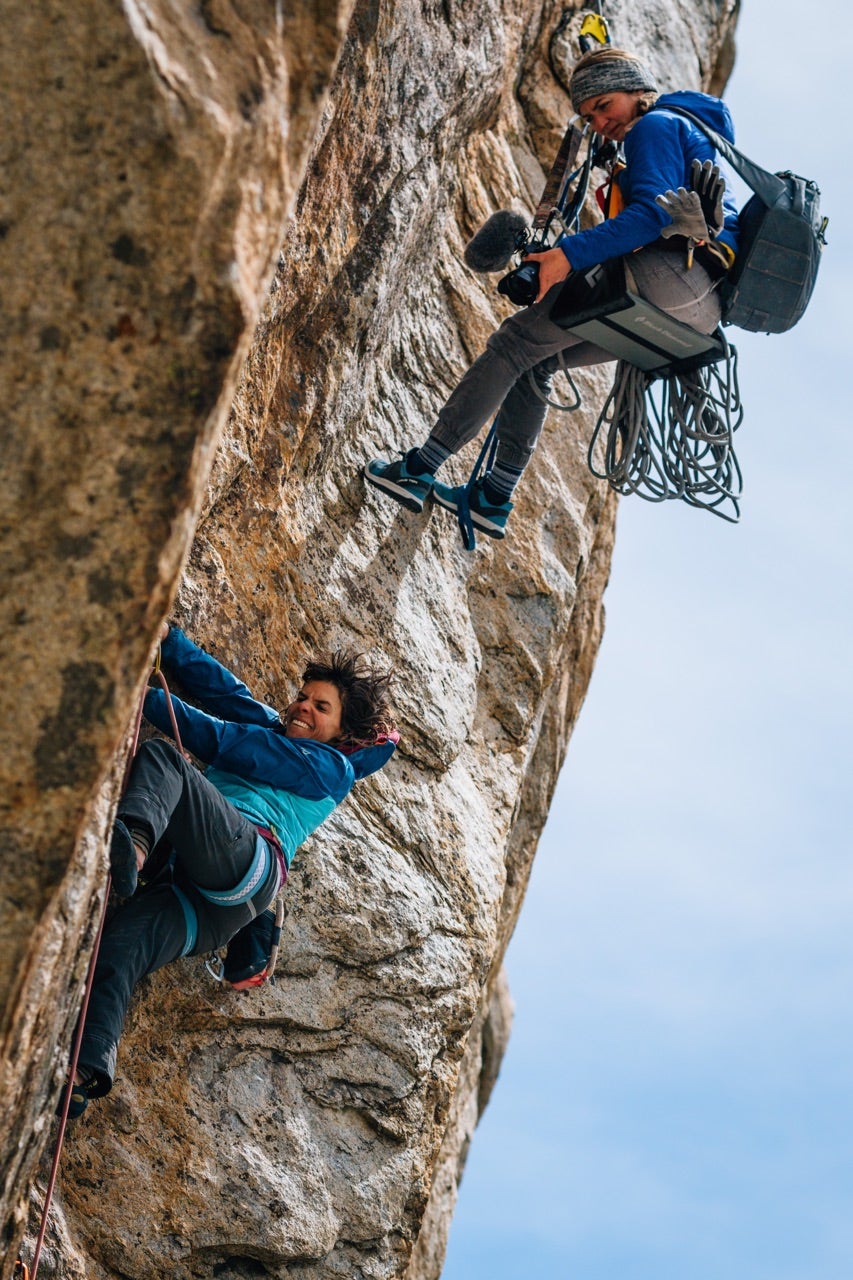 On the importance of asking quetions and getting help.

There are people out there who have more experience than you, or they know more, or they’re better at something. That’s fine! Think of them as resources, not competition or an idol you have no business talking to. Being open to learning from actual people can change your life; it’s definitely changed mine. A lot of the time when I’m trying to figure something out, I know so little about it that I’m not sure of the right questions to ask. It takes the back and forth of a conversation to hone in on what I should be asking, as well as what to do with the information. I heard a quote the other day about dreams, that once you achieve a dream, it’s not a dream anymore. You have to come up with a new dream to work toward and push yourself for. As we are deep in Pretty Strong, it’s exciting to think about what the next big project will be. Stay tuned for that!

For more information on the Pretty Strong film, check out the Kickstarter page at https://www.kickstarter.com/projects/nevernotcollective/pretty-strong-all-your-favorite-climbing-chicks-in.

Images courtesy of Calder Davey and Never Not Collective.