So Worth It: Jenny Abegg's Lessons For Listening To Your Inner Voice 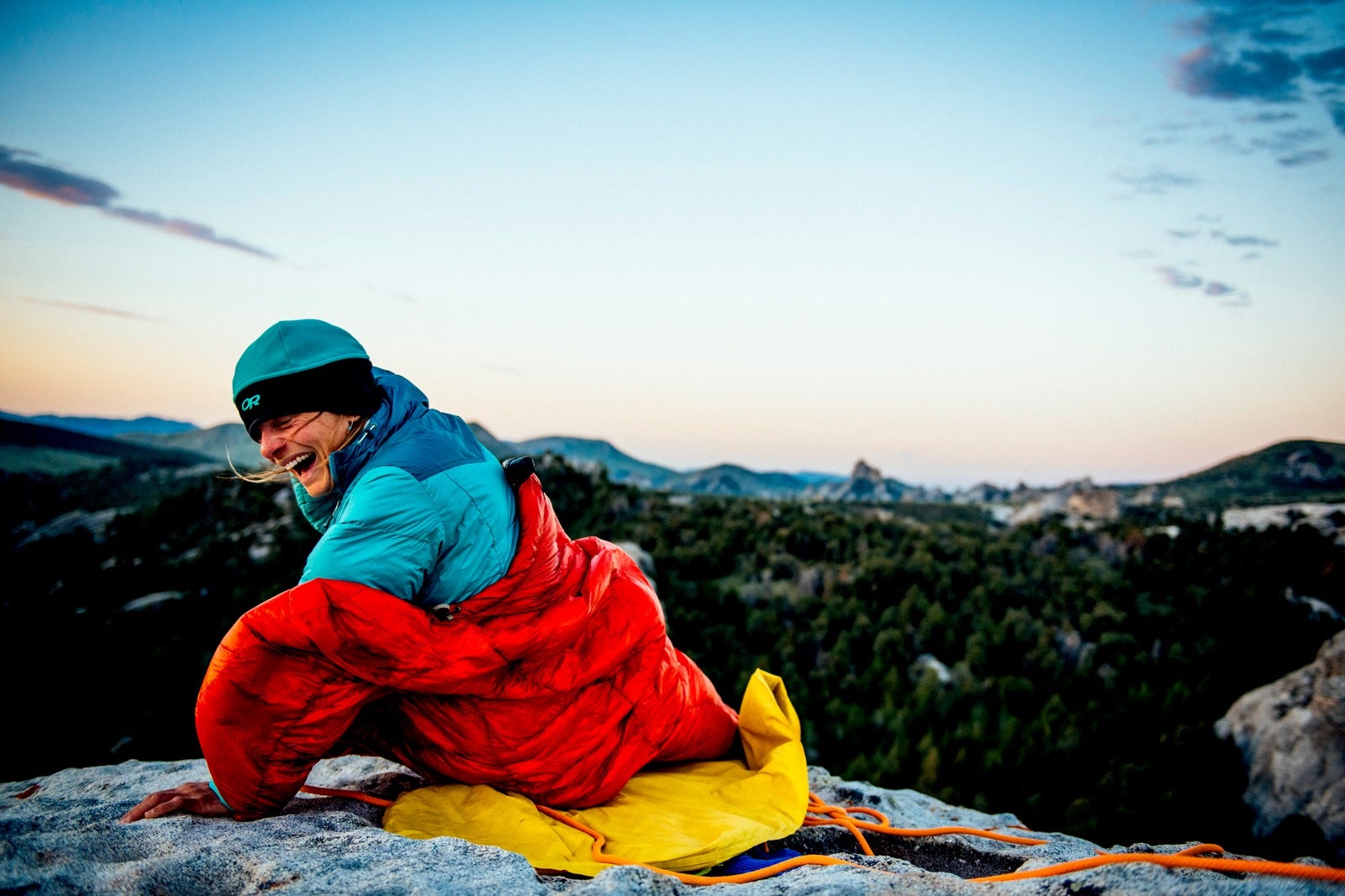 I don’t want to be here. Perched halfway up Moonlight Buttress with five pitches of sustained 5.12 climbing above me, I am filled with dread. My fingers sting, my mind won’t be still, I feel exposure taunting me from all sides. For some reason, all I can think about is water. I want to float, to be surrounded and held, to let the smooth moisture soothe my gobies. I want to bury my head deep under the surface and hear nothing but silence. But instead, I cling to the vertical orange rock, a cacophony of voices shouting back and forth, beating on the walls of my mind. I don’t want to be here.

And one thing I know for sure about splitter sandstone climbing: you have to want to be there.

Moonlight seemed like the next step, I guess. I’ve been climbing for over six years. For the past few years I’ve absolutely devoted my life to the sport. The lifestyle. I’ve lived on and off in my van, wrote for Climbing Magazine, worked as a guide for multiple summers. I’ve taught clinics at festivals, traveled around the world on climbing trips, wore Outdoor Research clothing and proudly tagged them in social media posts. If anyone was watching, they had no reason not to think that I was a committed climber—an experienced climber—and I thought so, too. You could say it was my identity, I guess, although I liked to think I was made of so much more. 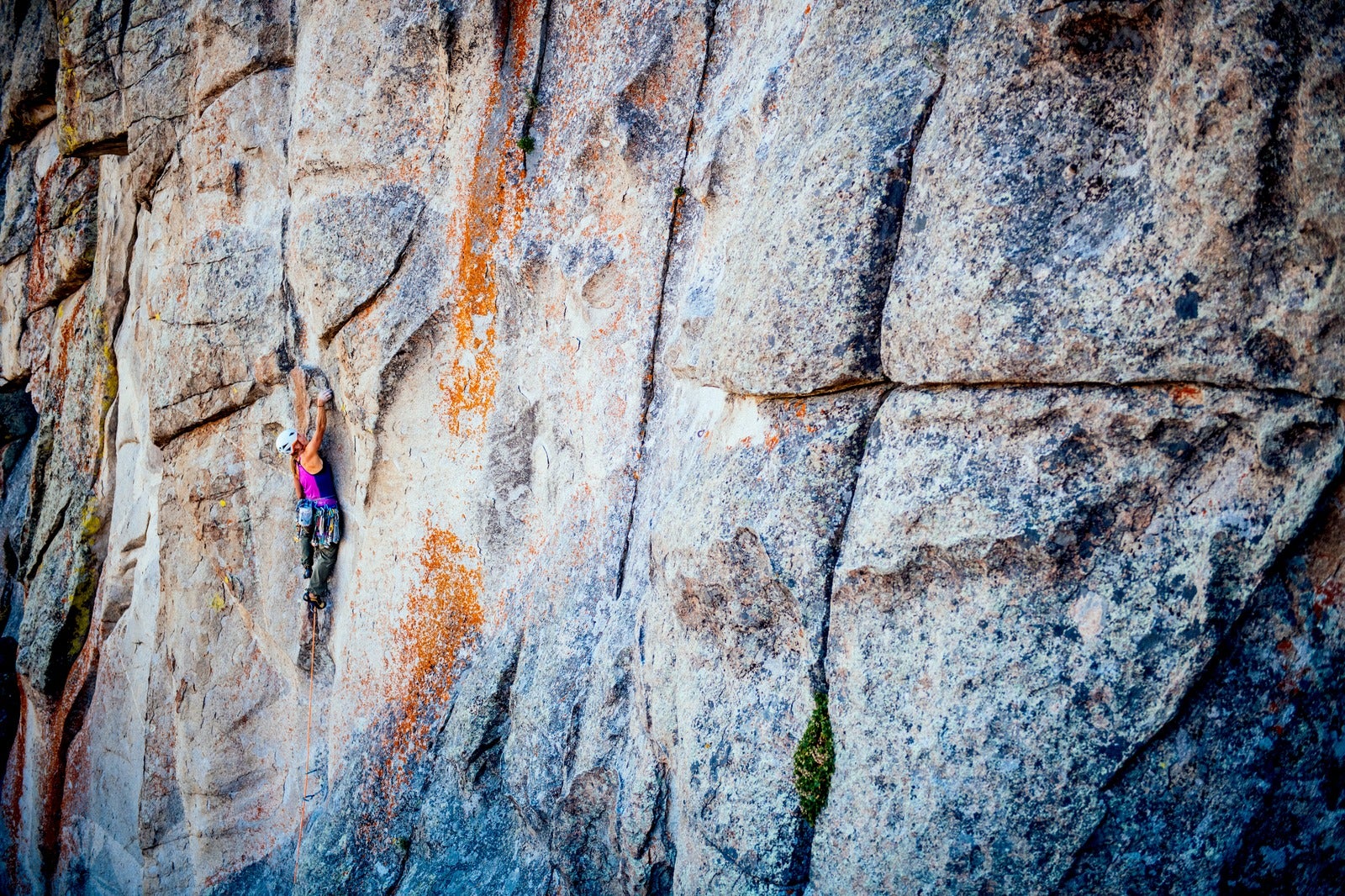 The previous fall, I had moved to Bend, Oregon, hoping that year-round access to sport climbing would provide me the kind of routine I needed to continue grow as a climber. It was all with the aim of being able to scale some of my lifetime dream routes: Mate, Porro y Todo lo Demás on Fitz Roy, Thin Red Line on Liberty Bell, the Rostroman. Moonlight Buttress. But contrary to what I was anticipating, Bend calmed me down. I traded climbing plans for trail running. Made friends with non-climbers. Went to shows and read more books. Borrowed a mountain bike from a friend and experienced flow for the first time in a long while. Got a steady job and planned a surf vacation. Bought a pair of skis and explored the backcountry, then bought a house and explored domesticity. I was really happy—but my enthusiasm for climbing was waning. I needed it less, I suppose. 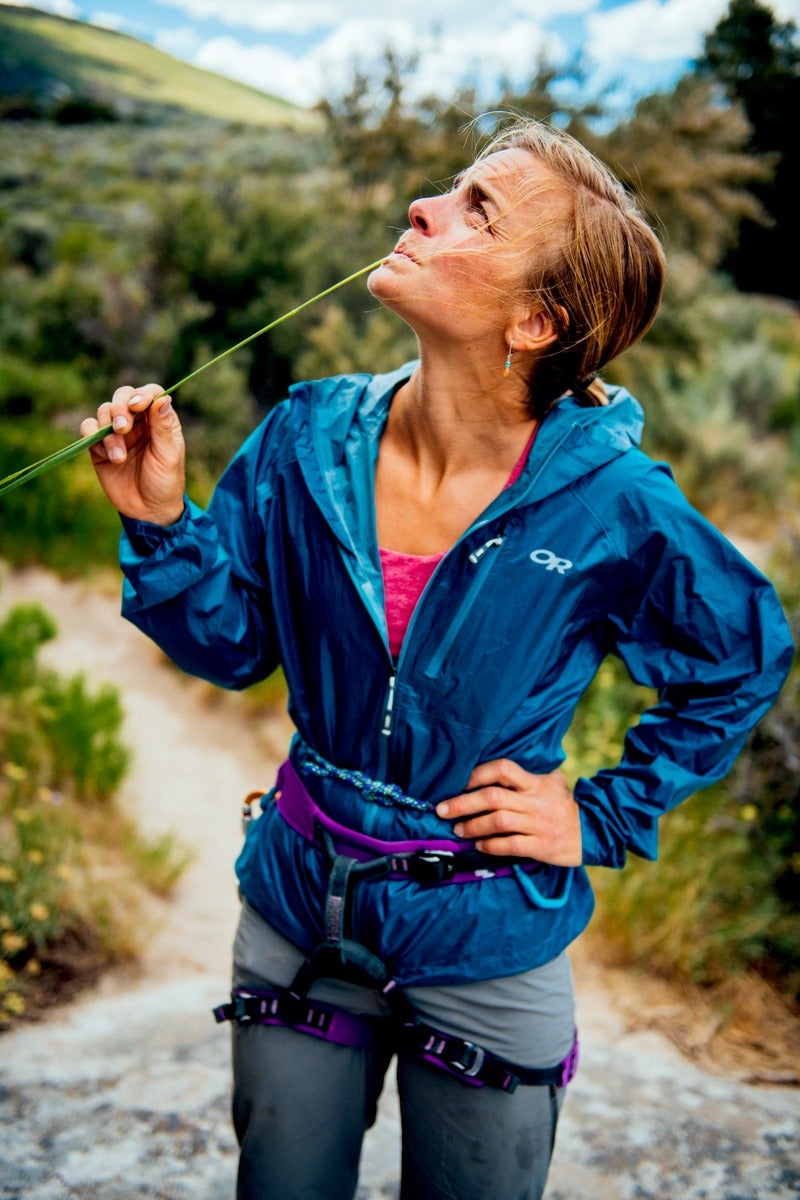 Moonlight still felt like something I should do, though. As a climber—a devoted, “lifestyle” climber—it felt like something I should want to do. A lot of my friends had done it, and I had even climbed it many times before. Heck, I had effectively sent the route six months previous, but hadn’t led the crux pitches. My partner Becca was psyched, and even if my enthusiasm didn’t quite match hers, I said yes to the plan and drove my old blue van through the desolate west that connects Bend and Zion National Park. I couldn’t sleep the first night I arrived, even though we were just rapping in the next day to top rope the crux pitches. This was supposed to be fun.

But it wasn’t. I didn’t want to be there.

My body hurts, but more than that, my brain is tired. I am suffering inside, and I want to shut off my mind. My situation is far from dire—my safety is not in question, I’ll be okay in a matter of hours—but the dread is real. I tell Becca I want to go down—we’re not sending anyways. It’s the first time I’ve ever made such a suggestion during a climb. We have more than enough water, but I feel parched, inside and outside. I lace up my shoes slowly, willing myself to carry on, trying to suspend time. 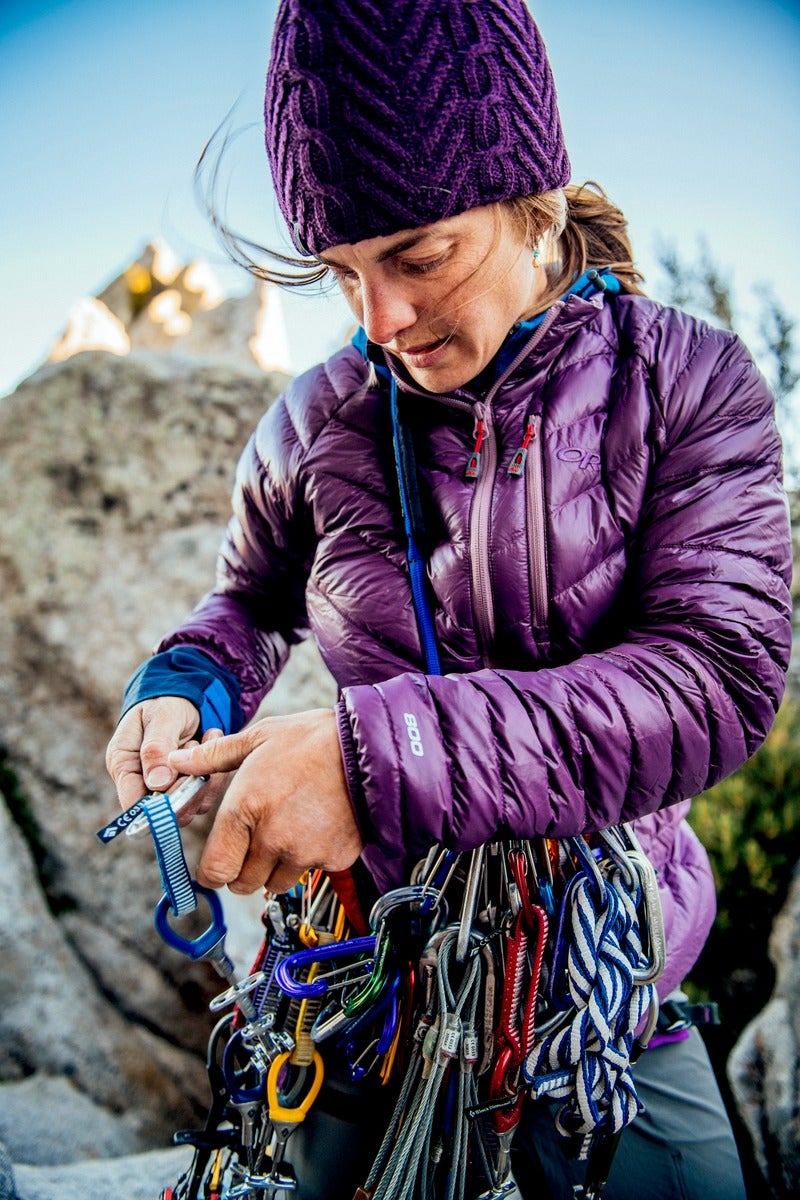 There Are No Rules

And so it was up high on Moonlight, midway through the #0.5 splitter, that I had a final reckoning with myself. I knew I had to finish the route that day, but I knew I didn’t need to come back. I didn’t want to be there, and I didn’t have to be there. And I didn’t have to want to be there either. There were no rules: no, “You’re not a climber unless you’re constantly setting goals and progressing.” No, “You should enjoy climbing 5.12,” or, “You’re a failure if all you want to do is climb less-than-vertical ridgelines in the mountains.” No, there were no rules, save for the ones I made for myself. My daily interpretations of the Instagram feed, my rampant comparison games, my measuring up and autopilot goal setting and mindless plan-making.

I didn’t have to do anything. 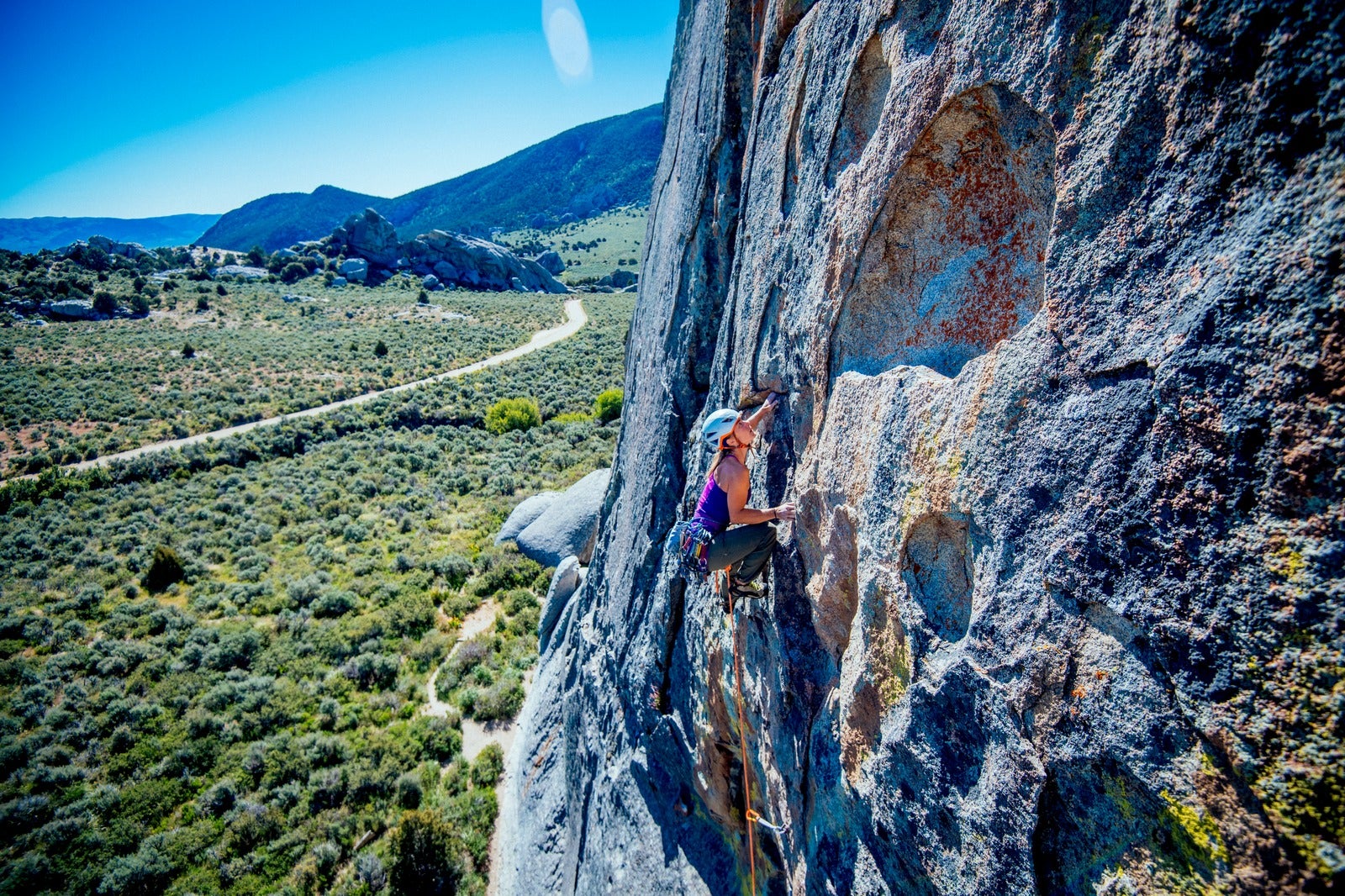 Moonlight taught me, yet again, that what I think I should do actually has no weight in the real world. Making decisions based on love beats acting out of fear—fear of losing my identity, of not being enough—every time. Challenge is vital—still a huge part of my life—but when challenge turns to dread, it loses its power. It quickly turns from light to dark.

And so I spent the summer after Moonlight climbing moderate routes in the mountains with partners I love. I ran trails, scrambled ridgelines, and worked on projects at my new home. I didn’t do anything groundbreaking or hard, nothing that “advanced” my life as a climber. But boy, did I have fun. And as I did, I started to hear a louder and louder voice: my inside voice, finding its place outside, growing from a whisper to a shout that could whoop and holler from the mountaintops. I may not be growing as a climber like I used to think I should, but climbing rocks fills me with joy again—and that might be all that matters.