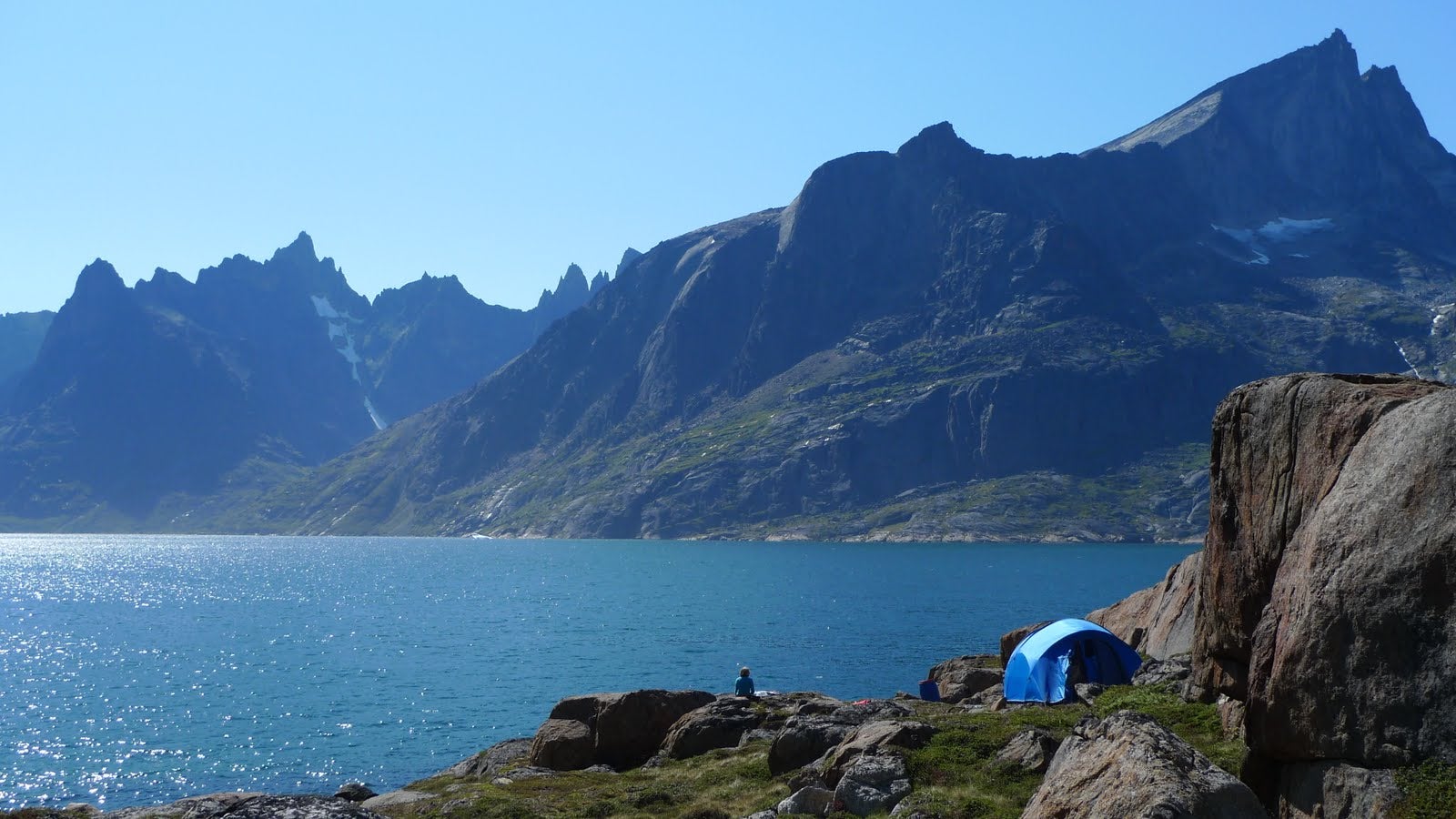 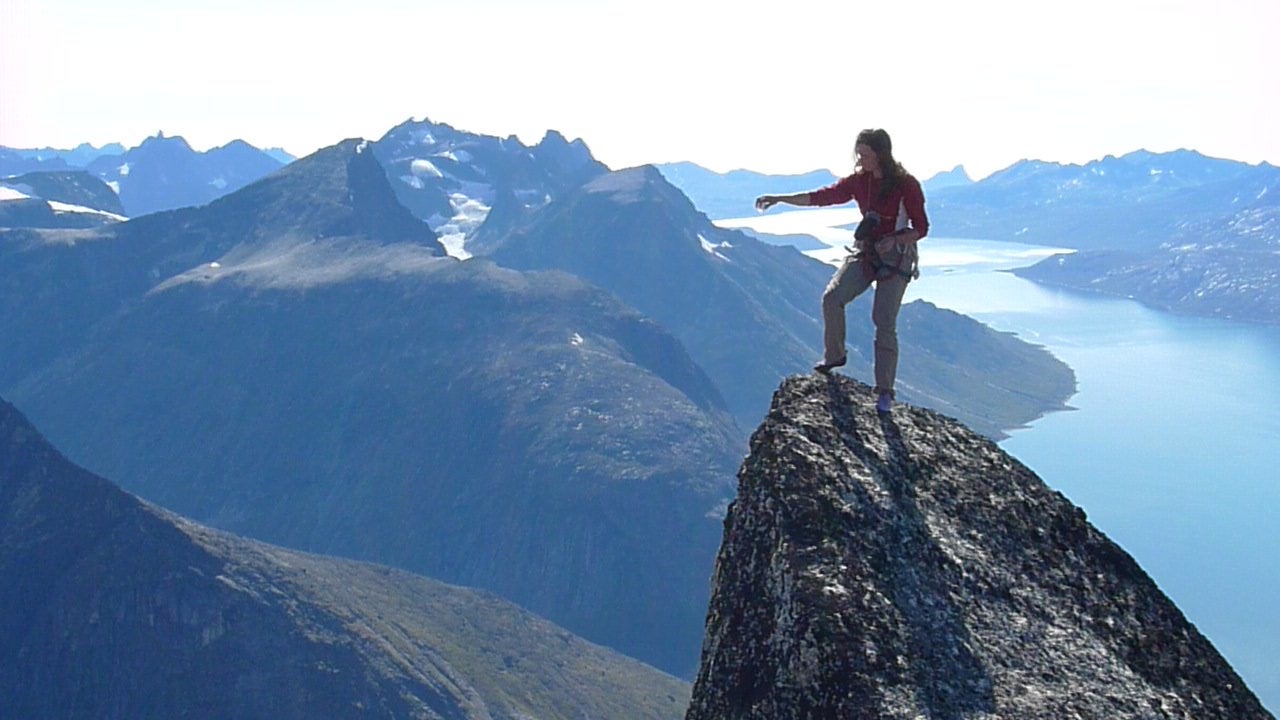 The dream was to go somewhere wild. To gather a small team of friends and head somewhere unspoiled and far away… and to climb.

Greenland is one of those places where just saying its name evokes a sense of wildness. I knew I could find climbing adventure there.

The next step was to pull together a team. I’ve been with my husband, climber Jim Surette, for seven years and yet our expeditions had always been with other people. So we thought we’d give partnering up a try this time for our Greenland expedition. As recipients of a Copp-Dash Inspire Award, our goal was to go light, without a lot of complications or fanfare. We quickly found two teammates with the same vision: Dave Nettle and Danika Gilbert, our friends from out west.

I spent months obsessively researching. I scoured magazine and journal articles going back to the 1950s. I cold-called climbers I didn’t know but who had been there, pestering them for beta. I interrupted a dinner party at Mark Richey’s house to raid his archive of expedition photos. I couldn’t keep the Greenlandic place names straight, so I even drafted my own map of the southern tip of the island. I became a complete expedition literature dork.

But eventually, all the research paid off and we settled on an objective. We found an old photo of a steep, wild-looking granite wall on an island in one of the relatively less explored fjords of south Greenland. It had seen activity by only one team of climbers—a group of Brits in 2001—and had only a few established routes, all on its right side. Our goal was to explore the island and try to open a new route on the left side of the wall called The Baroness.

After the months of research, the endless logistical negotiations, a marriage-stressing packing session, and then a lost-luggage delay, the moment we pulled into the fjord on our chartered boat and spied the wall for the first time is an experience I’ll never forget. “Holy shit,” I said to Jim as we leaned against the railing along the bow of boat. “We’re actually here…”

The boat dropped us off and we set up a camp in the spongy heather along the shore of the fjord. There were cliffs everywhere—walls rising right out of the dark navy seawater—and peaks beyond peaks, many with outrageous, castle-like shapes and silver, cascading waterfalls between. The ground, almost none of it flat, was inhabited by thick mats of lichen, moss, and blueberry bushes. It was like stepping into a fantasy world.

We spent two days surveying the wall, searching for a natural line up its center orange buttress, but to no avail. The crack systems were thin and discontinuous and the rock brittle and friable. Frustrated, Jim and I decided to check out the right side of the wall where the Brits had climbed and where the rock quality seemed better. Dave and Danika opted to climb a striking crack system on a lower cliff opposite the wall, which turned out to be our lucky break. From across the valley, they were able to see the upper left side of the wall that was obscured from view in our camp. They spied what looked like a continuous right-facing corner system to the summit. We had found our project.

We ended up establishing and climbing the line as a team: Dave and Danika pushed the route from the ground to a high point in what we called the “gray bands”—two roof sections about halfway up the wall where the crack systems petered out. Jim and I climbed to their high point and then pushed the route higher, freeing the cruxes through the gray bands and stopping a pitch from the summit after a full day. One of the best moments of the trip was when Jim pulled around the second roof on lead—a knife blade and opposed #3 stoppers at his shins—to find a hidden splitter crack.

“There’s a finger crack!” he yelled down to me at the hanging belay, “It’s gonna go!”

The following day, Dave and Danika fired the line to the top, summiting The Baroness in a windstorm that, unbeknownst to us, was the harbinger of unsettled weather that would plague us the rest of the trip.

With our objective accomplished and ten days remaining in our trip, we decided to move camp to the next fjord north—Tasermiut—home to Nalumasortoq, Ulamatorsuaq, and the Ketil: the classic big walls of south Greenland. Arriving in Tasermiut was like arriving in Yosemite and seeing El Capitan for the first time. Pristine wilderness guarded by 1,000-meter, perfect granite walls… we had found paradise.

Unfortunately the rain that had soaked us as we moved camp had also soaked the cliffs. The Tasermiut cliffs are famous for splitter crack systems that continue uninterrupted for thousands of feet. They also serve as the plumbing conduits for rain and melt water. We spent most of our final week in Greenland huddling in our base camp tent, enduring nearly incessant rain. When the rain did let up, teasing us for half-days here and there, the fog would roll in, wrapping the granite walls in shields of moisture.

The weather broke for one day of blue skies the day before our pickup. The four of us left camp at dawn and hiked up to the base of the Ketil Pyramid, its 450-meter, triangular-shaped south face the perfect objective for a quick outing when all the big walls were still wet. We split into two teams of two, Dave and Jim followed by Danika and me, and we climbed our way into the sunshine on fun 5.10 terrain. On the summit—a pointy spire reminiscent of the towers in the desert southwest—we pulled out a small film canister of Jonny Copp’s ashes that we’d carried with us throughout the trip. He had been our fifth expedition member in spirit. Danika stepped out onto the peak of the spire and released him into the wind. One last summit for Jonny.

The Greenlandic landscape is so strikingly scenic that we couldn’t be disappointed when our pickup day turned out to be some of the best weather of the trip. We convinced our new friend Soren to take us on a quick tour up the fjord in the Zodiac while we waited for the tourist boat to pick us up and carry us back to civilization. It seemed like around every bend there was a new cliff that begged to be climbed…“Look at that one!”

“Hey, check that out!” Like any good expedition, we left south Greenland all promising that we’d be back again.

This trip was made possible with the generous support of the Copp-Dash Inspire Award and Outdoor Research. We would also like to thank Niels Tækker Jepsen and Søren Tækker Jepsen of the Nanortalik Tourism Service for their help and friendship.